July 2, 2002 - The winners of the 2002 Nissan Vehicle Design Competition were announced by Shiro Nakamura, Head of Design at Nissan Motor Company, at a presentation at the Royal College of Art in London on 1 March 2002.

Post-graduate students from the Vehicle Design course at the Royal College of Art worked in teams since November 2001 as part of the Nissan-sponsored project to design a Nissan compact car for the year 2010. The project was led by Dale Harrow, the Head of the Vehicle Design Department, with the support of Shuji Takano, Vice-President of Nissan Design Europe.

The theme of the project was to look at the role of the compact car in Europe in the year 2010, and to design a future C-segment Nissan, with only some package dimensions such as maximum length given. Seventeen post-graduate students, working in three teams, took part in the project. The three narrative design concepts that the teams developed were:

Evolution – how a car adapts to it's users and matures with age.

Underwater – how a car can use a new inspirational approach to find a new visual language.

The teams developed the concepts by researching scenarios such as changing lifestyles, social groupings, technologies and interfaces between the car, public transport and the city that could produce new vehicle typologies. Members of the public were interviewed about their hopes and dreams for future vehicles.

The group which developed the winning design, Mature Mobility, took an interesting approach to inital idea development, enlisting the help of a fortune teller to help predict future car would be in 2010.

They made video interviews of people on the street, asking them broad questions about their dreams, fantasies and desires... "If you had 26 hours in the day, what would you do with the extra time?"

"Before making any decisions on possible themes or scenarios, we went out onto the streets and talked to people." said one member of the team, "To avoid their preconceptions about cars we asked them abstract questions. We discussed their answers and proposed a timeline of their life for the next 10 years, leading to a scenario for each personality in the year 2010."

"Together with the Nissan designers, we discussed the different scenarios and decided to develop 'mature mobility' as our chosen direction."

"Companies have a tendency to use mood boards and keywords to influence their research too early. We took a 'hands-on' approach to package research. Taking to the streets once more, we investigated existing products. We evaluated the merits and minuses of everything from a Lamborghini to a garbage skip and much in between."

"We came to the conclusion that being mature was not a question of age or status, but a state of mind. By applying the concept of mature mobility to our Nissan Compact, we hoped to design a car for people of any age, race or sex that would serve them as an adaptable platform on which they could live out their own unique lifestyle with a minimum of effort and with absolute convenience. We adopted the Japanese concept of tatami as an interior theme and chose to develop the car from the inside out."

Unlike products which offer a rigid layout by which the owner is expected to adhere, the team proposed that the car be designed entirely around the one constant that will always be in the car while it is in use: the driver. Thus the concept was christened '1+'. "We don't want to sell a particular lifestyle, we're selling a space for an individuals lifestyle, to use the way they want."

An optional number of expanding seats could be arranged as required around an adaptable grid on the floor of the car. Based on the scenarios for the year 2010, the team developed a number of interior solutions made possible by the 'tatami' grid. These included storage systems and possible third party accessories such as a food cooler that is not only secured by the grid system, but uses it to tie into the electric supply of the vehicle.

"The chosen exterior theme came about as a result of the interior. having explored various more traditionally automotive themes we decided that a truly 'mature' approach would be to discard current trends in favour of simplicity, functionality and space-efficiency."

"We tried to expel the notion of a pre-moulded, 2 parents, 2 children compact car. The 1+ is an adaptable, open platform on which you can live out your own unique way of life."

Another student team looked for inspiration in the different 'strata' in which we live or play, from skyscrapers, to ground level, underground in the city, and underwater, before settling on the theme 'Underwater'.

Working with the keywords: 'play', 'discovery', 'new sensations' and 'relaxation', they explored how underwater experiences could inspire car design, with influences from the natural world, and from aquatic activities such as scuba diving. Their final design is a three-seater hydrogen-powered recreational vehicle.

Each occupant of the vehicle has a unique environment - the theme for the drivers' space was excitement and play, for the passenger 'co-driver' the focus was on 'discovery', with guages and information systems, and for the rear passenger a space was created for relaxation, using a unique water-filled seating system.

The 'Evolution' team focused on personal interaction with the vehicle, with a concept that allows the users to feel increased attachment to the car as it evolves with them through it's adaptability. A recreational vehicle, the concept explored ways to adapt the configuration of the car to the individuals using it. The design featured materials such as some copper parts that would gain character as they age, and also used a mix of 4-5 types of materials, each aging in different ways depending on the individuals usage of the vehicle - so each car would take on it's own individual character over time.

The vehicle uses a unique digital 'pendant' key system which control security, navigation, and adapts the vehicle to each individual users preferences for seating, controls and entertainment settings. Digitally controlled seats use a system similar to a bean-bag to adapt exactly to the contours of each indiviual user, and to recall that configuration each time they enter the vehicle.

Final concept presentations were made in a range of media, from on-screen presentations and interactive digital models, to quarter-size clay models, and design sketches.

The Mature Mobility team created their model using Alias|wavefront Autostudio software, and presented the digital model on-screen using Opticore Realizer software which enables real-time interaction with the model, with a high level of realism. "The interior design and packaging is central to our theme, so a digital model was most appropriate to properly express our ideas. With the digital model, people can interactively move the flexible seating components about, explore the interior space, the door system, as well as the exterior form."

The judging panel for the competition included Shiro Nakamura, Senior Vice-President and Head of Design at Nissan Motor Company, Dale Harrow, the Head of Vehicle Design at the Royal College of Art and Shuji Takano, Vice-President of Nissan Design Europe, as well as other representatives of Nissan Design and journalists from the industry press, including Fulvio Cinti of Auto&Design, and Akira Fujiyama of Car Styling.

Mr. Shuji Takano said: "The Royal College of Art has an excellent reputation for producing some of the finest design talent in the automotive industry. It is very likely that today’s students will be enormously influential designers, so we want to provide all the encouragement that we can."

The project was unusual in it's emphasis on working as a team rather than as individual designers. "We wanted to promote team spirit which is so essential in car design today," added Shuji Takano.

Dale Harrow, Head of the Vehicle Design Department at the Royal College of Art said: "Nissan’s involvement in this project gives the students invaluable real-world experience to prepare them for their future careers."

The winning team received an expenses paid trip to Japan, including a visit to the Nissan Design Centre, where they presented their '1+' concept, and had the opportunity to explore the city of Tokyo.

The awards presentation also saw the announcement by Shiro Nakamura of the new Nissan London Design Studio, to be located in Paddington. 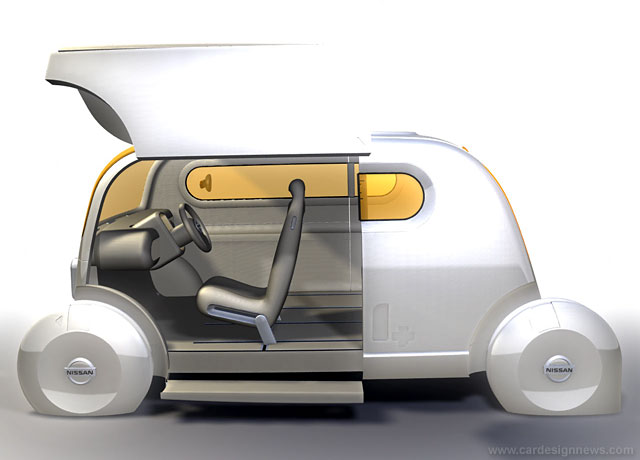 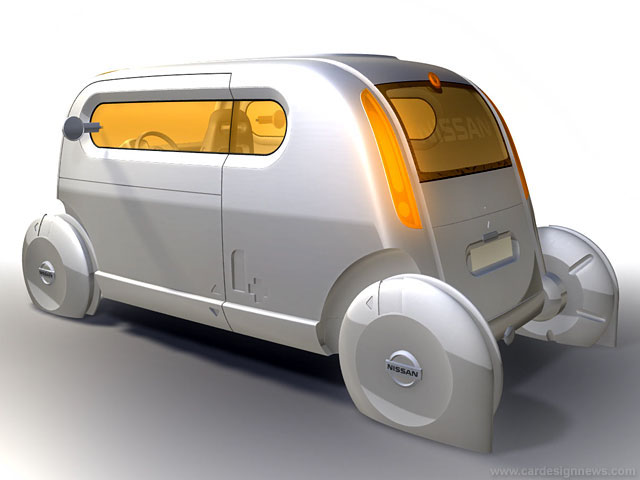 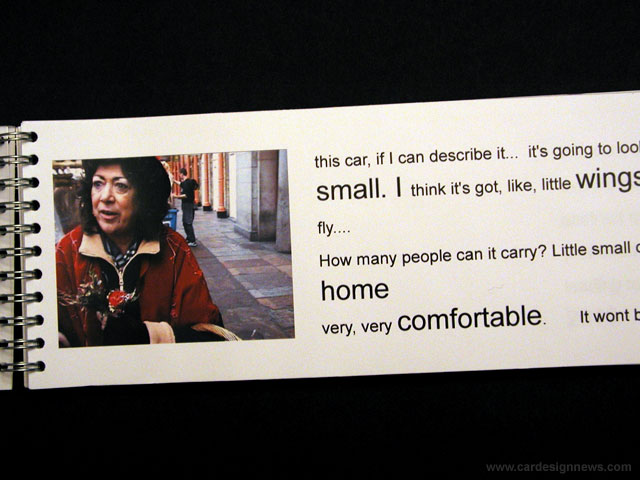 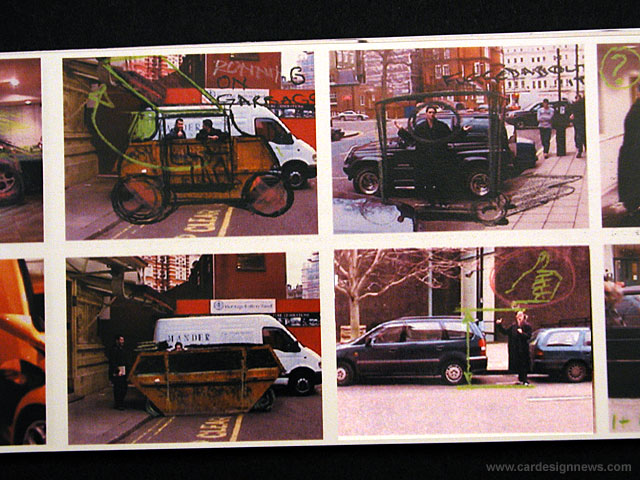 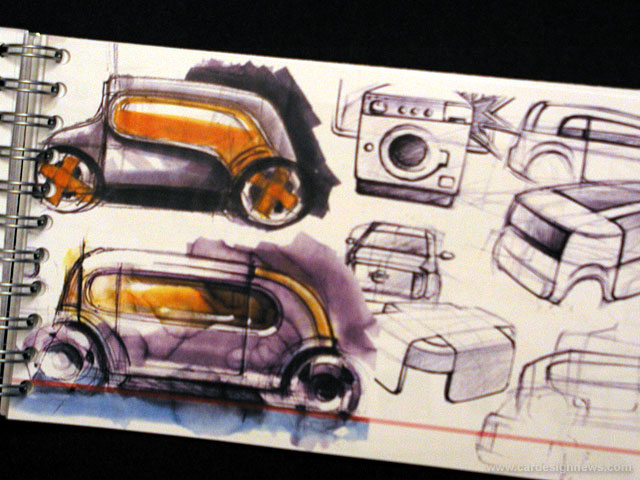 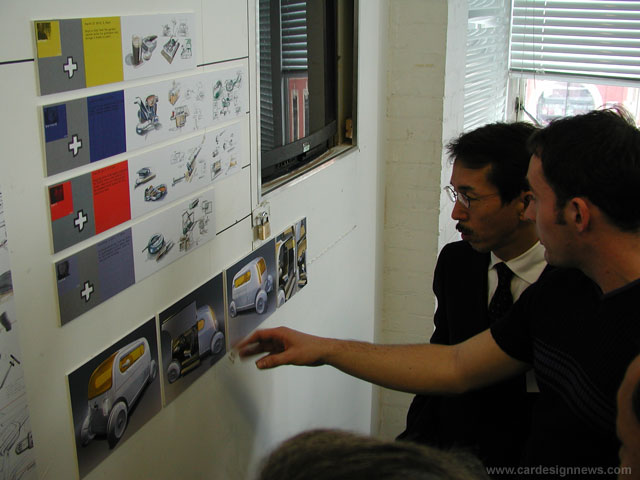 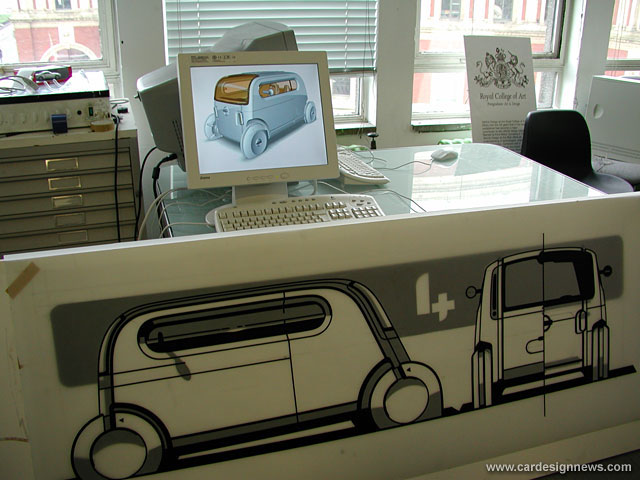 '1+' concept presented as an interactive digital model, using Opticore Realizer software. A range of interior configurations, the door system, and the exterior form can be explored in real time 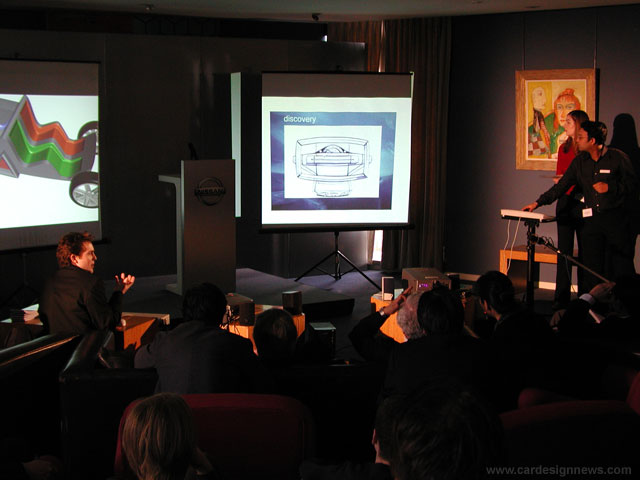 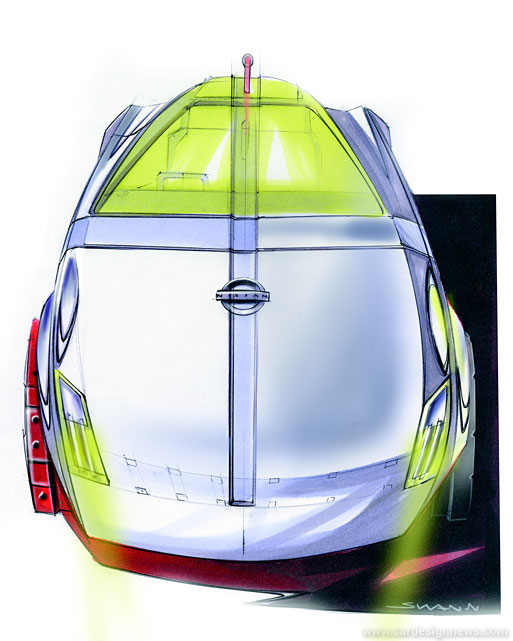 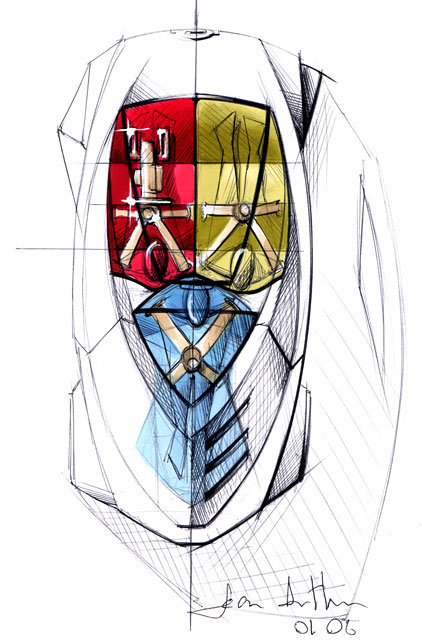 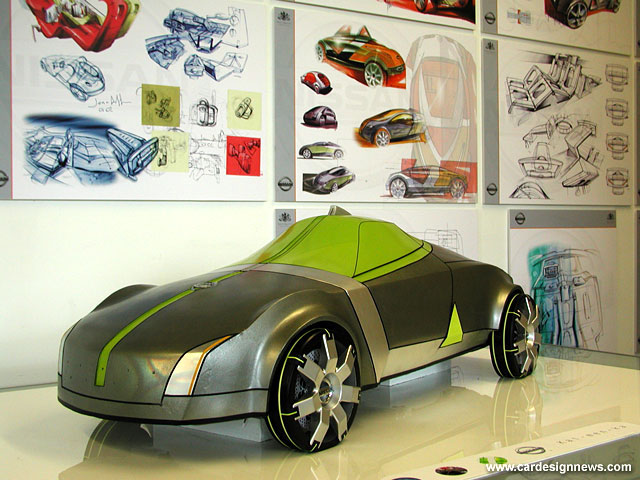 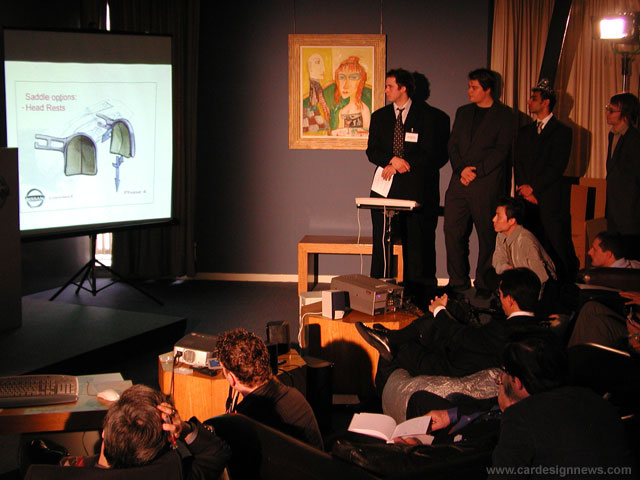 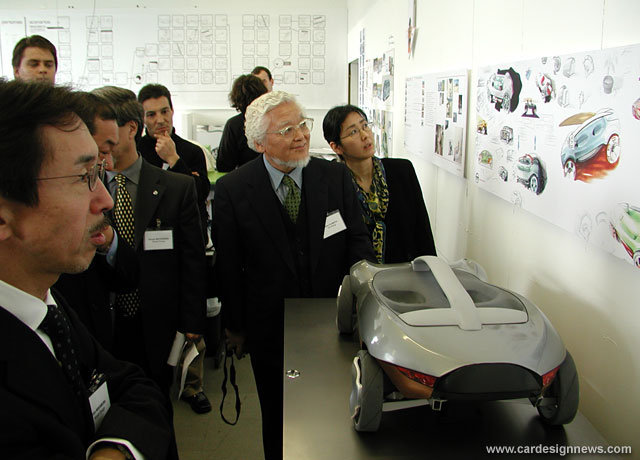 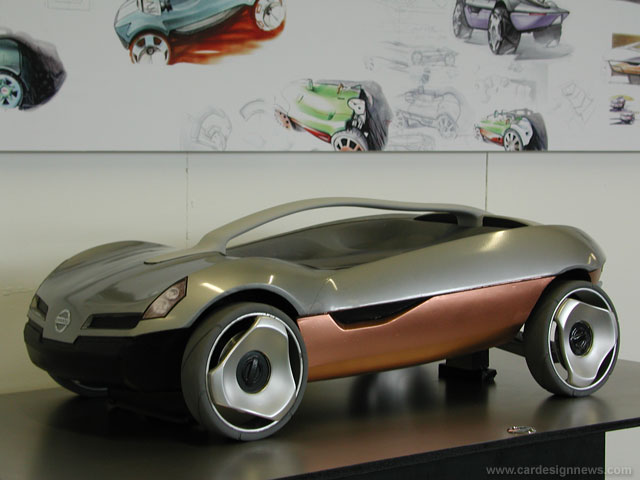 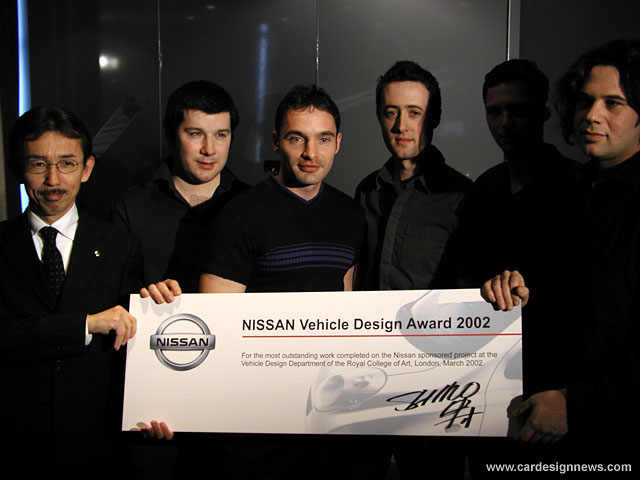 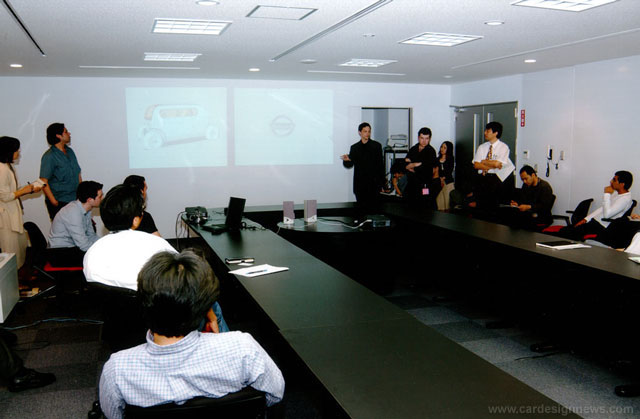