The Pforzheim course is one of the leading Transportation Design courses in Europe, offering BA and MA degrees. The work from the school always impresses with the high quality of scale models and digitally produced illustrations, and a unique 'house-style' featuring high-tech and science fiction influences.

The exhibition included work from graduating Diploma and Masters students, a Renault-sponsored project by the 5th and 7th semester students, as well as work from students in the earlier stages of the diploma and masters courses.

The Renault sponsored project was initiated with a briefing held by Renault Design Director Patrick LeQuement. Students designed entry-car concepts for developing countries. As with the past projects, the 5th semester students designed exterior proposals, while the 7th semester focused on interior design. Ten students were invited to Paris, where they had the opportunity to present their work to Patrick LeQuement and his design team.

The current sponsored project to be presented at the summer degree show in July is supported by Isuzu.

Juliane Blasi and Marcus Wallmayer presented a design scenario for an interstellar space mission. The thesis project is about the design and development of a manned, nine year space mission to our neighboring solar system Alpha Centauri. Together with NASA scientists they worked out a realistic transportation concept for 20 mission members. The journey to the 4.3 light-year distant destination would be on a ship with a laser-propelled lightsail.

The crew lives in a self sufficient biosphere with artificial gravity. The biosphere is designed in consideration of the psychological and physiological needs of humans as long term travelers. How can we create an attractive habitat which remains attractive during the entire journey? The interstellar mission was presented like a story, explaining scientific investigations with the help of sketches, drawings and text. By visualizing the mission's entire process a comprehensive overview of the whole scenario was given, describing the design phase of the spaceship and the crew's life in the biosphere up to the landing on the earthlike planet.

Kai Langer's 'Terior' degree project shows a new type of connection between exterior and interior in cars. This is not done by real physical breakthrough surfaces, but through the imagination of the viewer, to connect volumes and surfaces in the mind. The scale model displays a dramatic and well resolved sculptural form.

Jim Bastè presented the 'Bugatti Elephant - Luxe à la française', a diploma project made while at Volkswagen Motorsport. Although France is one of world leaders in luxury products, french luxury cars have been rare since the Second World War. The Bugatti Elephant is a vision of a modern french luxury limousine. The idea is based on the 1926 Bugatti Royale, and the name 'Elephant' comes from the Elephant sculptured by Ettore Bugatti's brother for the Royale's radiator emblem. The car also should have the paradoxal elegance of that standing elephant, traducing the paradoxes of french luxury, between tradition and innovation, showing and hiding, popular and private.

The car is 6m long and 1.4m high, but is dynamically designed, with kind of a 'coupé' silouhette. Its roof and front are covered with leather, and the seam in the middle is a tribute to the riveted Bugatti T57 Atlantic. The small glass panel on the side with a sculptured elephant on it, serves as an air outlet and a side indicator. Offering a large comfortable space to the passenger in the rear, the car is also designed to be as sporty to drive as a roadster, but it also can carry up to thirty wine cases in its refrigerated luggage compartment.

In his diploma presentation, Burkhard Leutiger presented a clubracer for Smart. This is a road-legal amateur racing car, perfect for trackdays, or the odd blast on well known B-roads. Its asymmetrical layout, with driver and motorcycle-derived engine side by side, has most of the weight concentrated in the center of the car, which makes for eager turn-in and high controllability.

A passenger can slip in behind the driver, so the Sunday morning or fastest lap-experience can be shared, an important selling point. At the track, the headlamps and rear bumper-module can be easily taken off, transforming the car into a serious racer, and saving weight. The project was conceived in association with MCC Smart GmbH, applying the flexibility and low investment costs of small volume manufacturers to a high volume industrial business. The car could be built to order in a highly personalized and flexible process, acting as a halo-car for the brand, and allowing to react on trends far quicker than usual in mass-production.

Henning Holstein presented a BMW Pace Car concept, aimed at all race car series, especialy for the American racing leagues. Designed for use as Pace and Safety Cars only, the concept represents their real status, further the car typifies the racing management. It's a silent trophy for the latest success of BMW motor sport.

Thomas Kraus diploma project 'Mars-buggy' is designed for missions to Mars to take place in 2040. Lightweight construction is important to reduce fuel-costs of the mission, so the seats and the load areas are held by a frame, not an entire body. The struts on each side of the vehicle are both the sliding-tracks of the crane, which can be moved to the front-end of the vehicle, and the side-impact protection of the passengers, in case of tumbling during hill-climbing expeditions. All devices that need to be swivelled are integrated in the harpoon at the front: the searchlight, the APX-Spectrometer (a detector for measuring the composition of different types of rock), and an anchor which is connected by two steel cables with a winch to assist in climbing steep slopes. The wheels are also reduced to the essential. Light forms characterize the design of the mars-buggy, in keeping with the light vehicle construction. Each wheel is electrically driven by wheel hub engines. The vehicle can be operated by remote control. For more flexibility there is no fixed drivers seat; the driver can sit in any of the four chairs which enables the vehicle to carry a wider range of loads. Operating controls are integrated in the space-suit.

Irina Espinoza Master's degree project 'Spirit of New Delhi' was made in collaboration with Johnson Controls Europe. It is an entry-micro-car for emerging markets. A one person vehicle with a storage compartment, that can be transformed into a second passenger seat.

With the same interior suitable for many markets, at the manufacturing stage interior components are interchangeable for right or left hand drive. A car for middle class young professionals, single or married with no immediate plans for children, and new generations with strong cultural values. In fulfilling these cultural and environmental needs, each place can have its own interior design: with colours and materials matching the feeling of their cities, the Spirit of New Delhi, Caracas, Shanghai, Kuala Lumpur.

Oliver Vogt presented his master´s project, 'Isetster' a three-wheeled roadster, based on a MINI package. The long hood hides not only the engine but also a large compartment. To provide an ultimate feeling of freedom, the Isetster has a transparent floor. Since the project was developed while working at the BMW studios, it was supposed to have a characteristic brand face. Vogt tried to revive the high grill, having its roots in the 1930s.Its light weight and the front wheel drive make the car both dynamic and easy to control. Since expensive parts could be taken from the MINI, this toy could be offered for an affordable price.

The Pforzheim Transportation design department is located on the outskirts of the town of Pforzheim, on the edge of the Black Forest, between Stuttgart and Karlsruhe. 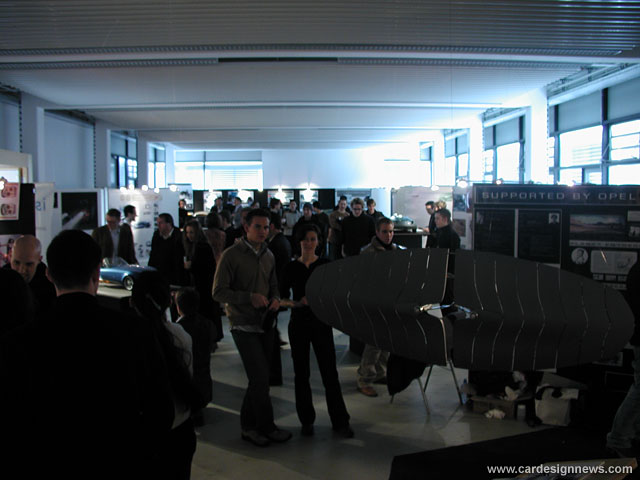 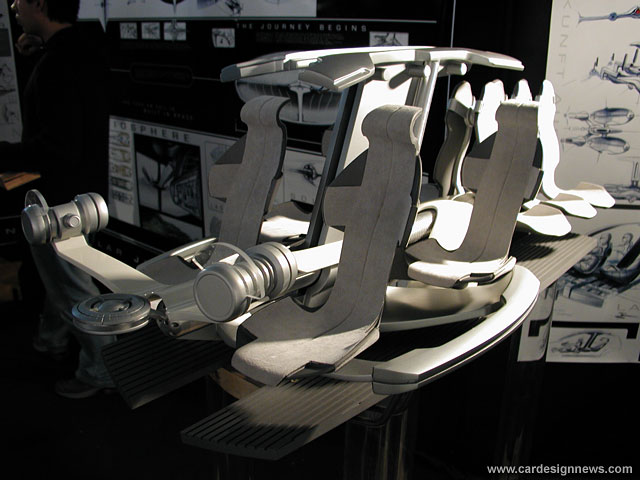 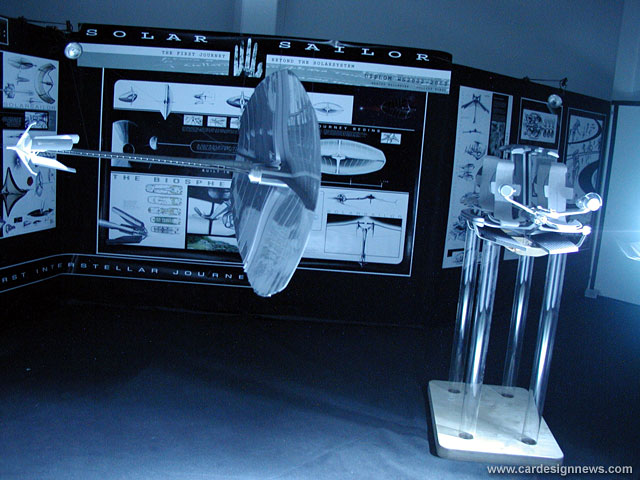 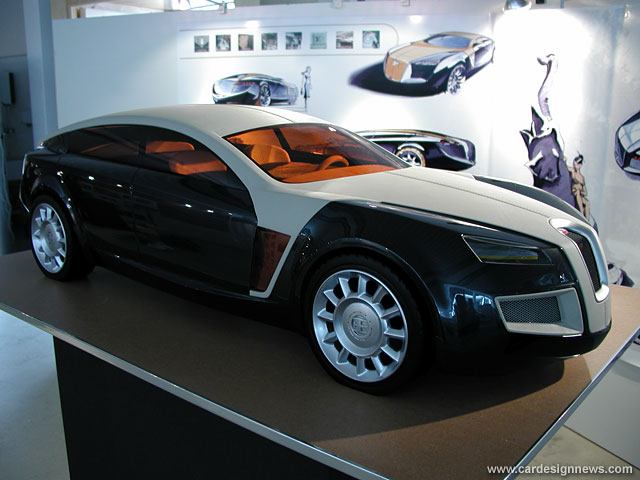 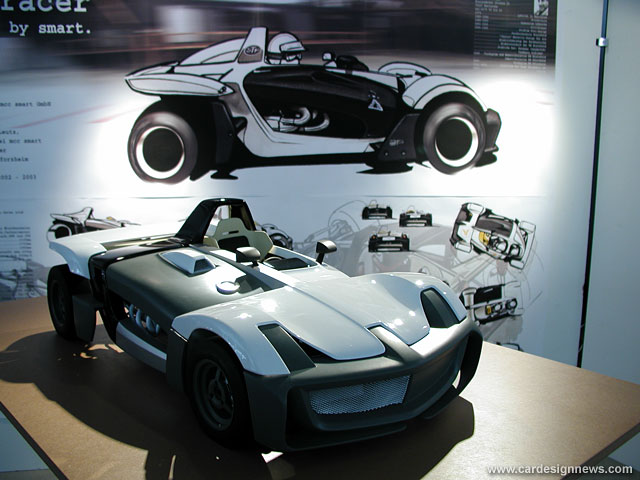 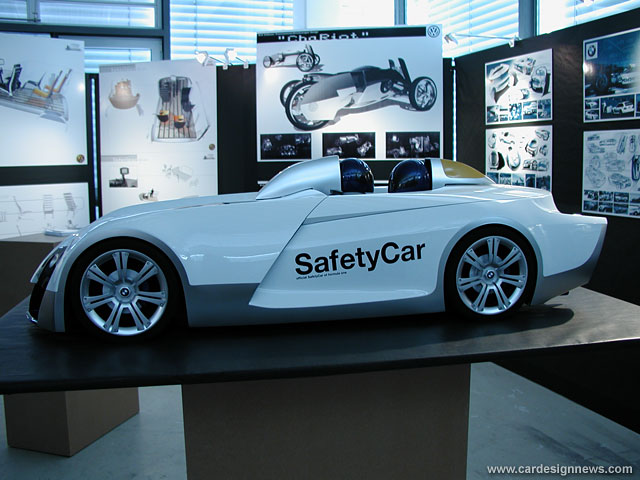 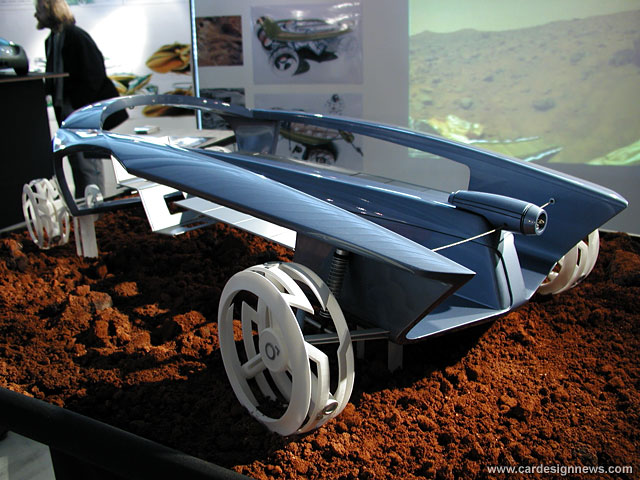 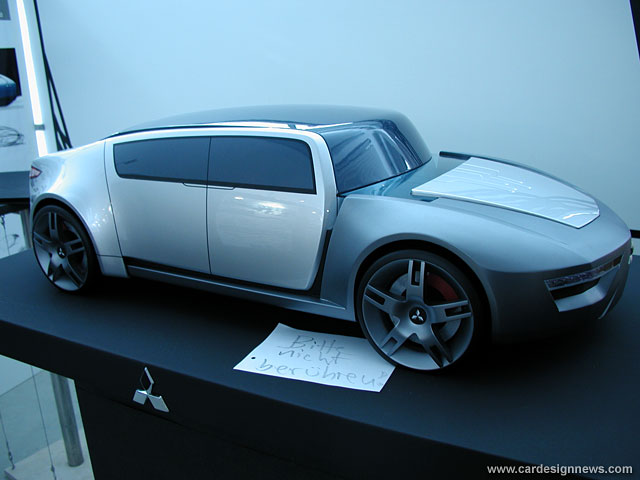 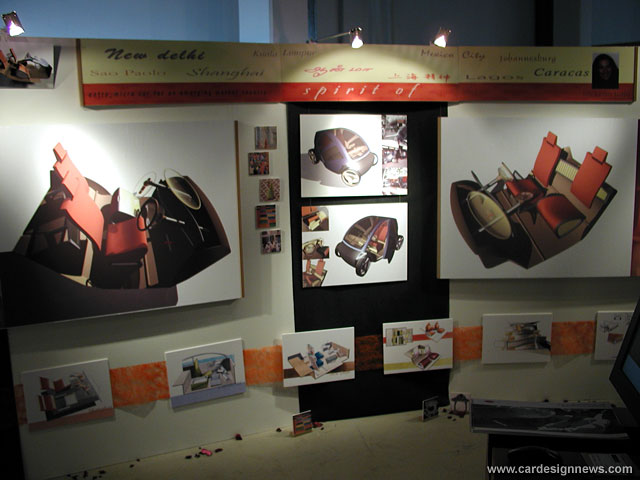 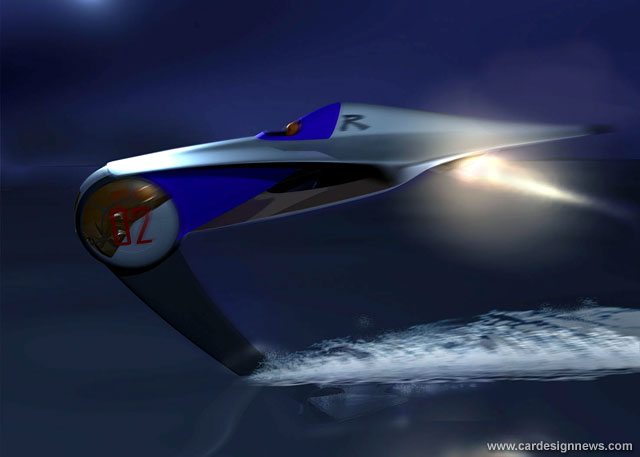 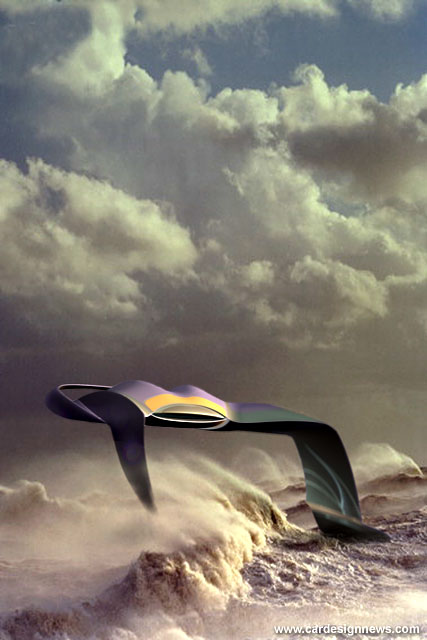 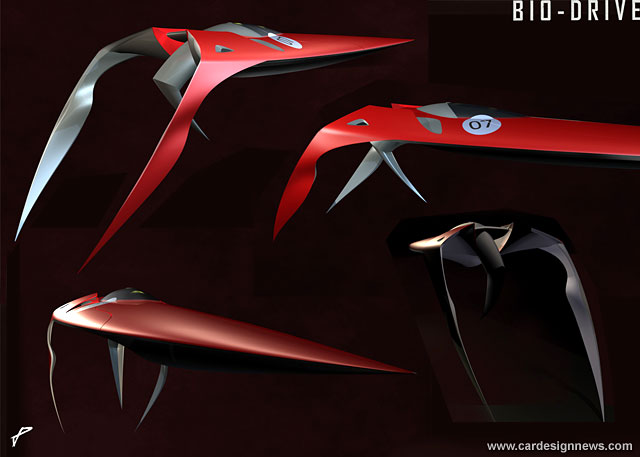 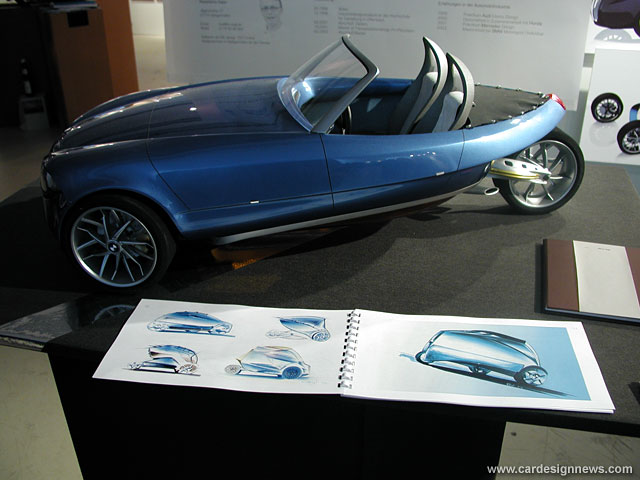 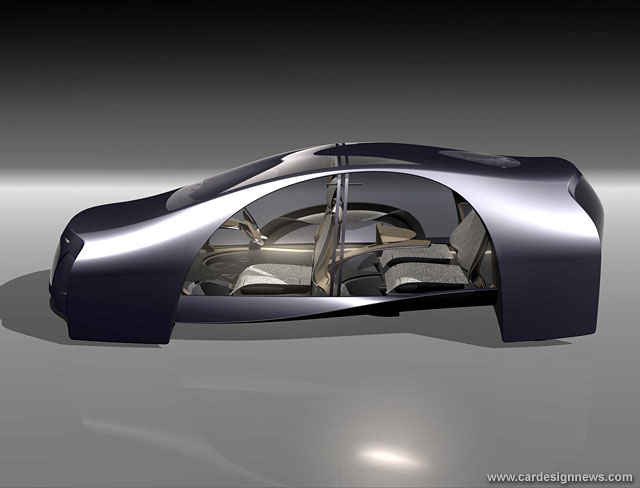 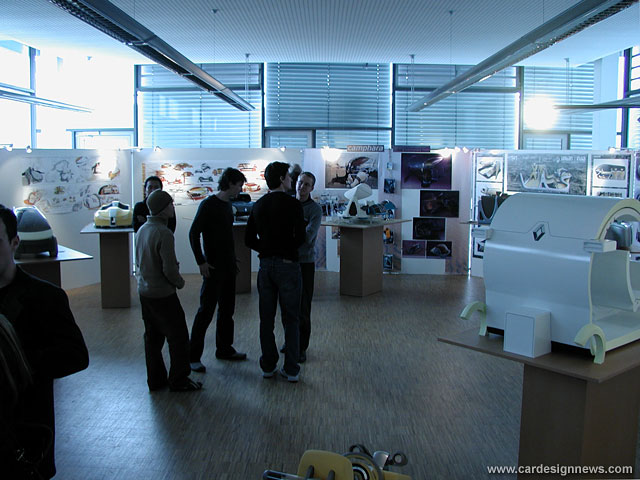 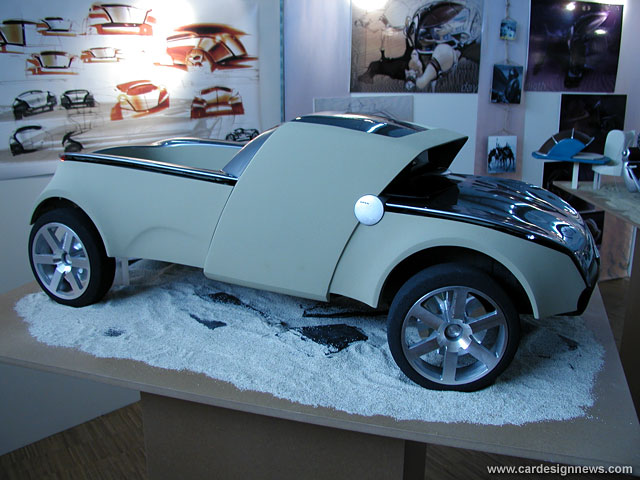 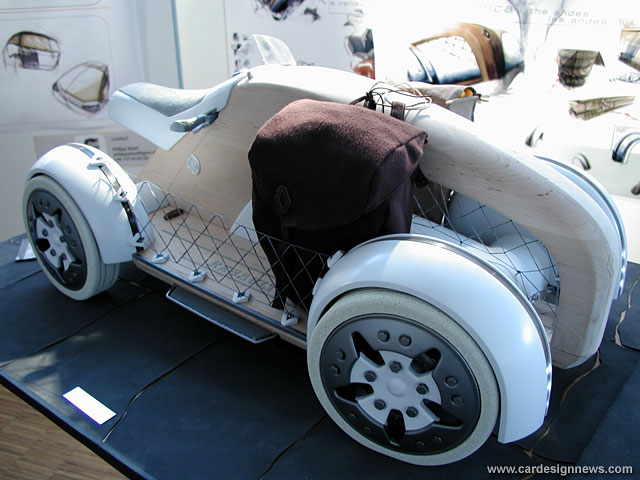 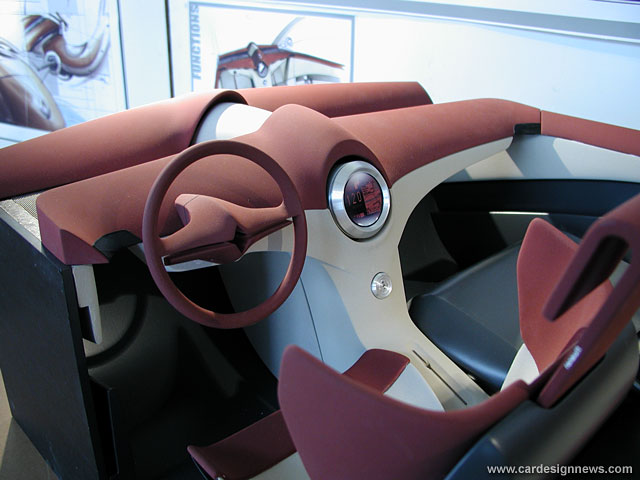 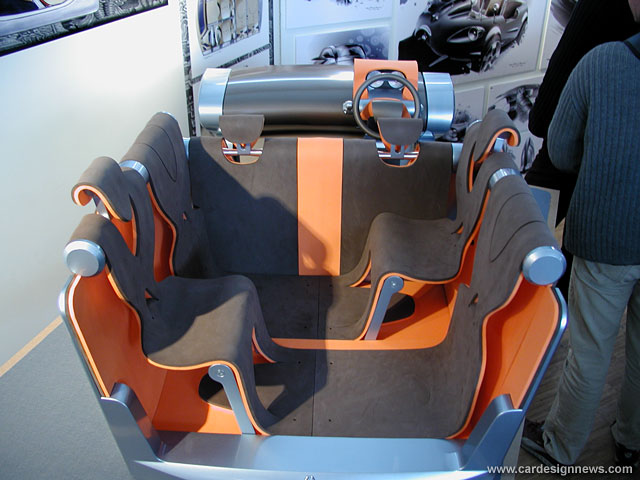