The Pforzheim course is one of the leading Transportation Design courses in Europe, offering BA and MA degrees. The exhibition included work from graduating Diploma and Masters students, an Isuzu-sponsored project by the 5th and 7th semester students, as well as work from students in the earlier stages of the diploma and masters courses.

Fabien Clottu presented a Mercedes sports coupe with unusual proportions for a Mercedes, that seek to give a dynamic and 'strong willed' character. "The idea was to design a Mercedes that could be used in a remake of a film such as 'Bullit'. This gave me the possibility to integrate the style elements and the atmoshere of this film in my concept."

Ilka Liebmann's 'Wasserlaüfer' is a vehicle for the road and on the water, using turbines in the rear wheels and an underbody design that creates a ground-effect air-cushion on land or sea. The vehicle is seen as bridging the gap between land and sea transport.

Mario Majdandzic presented 'Oxygen': "The intention of this project was to make a new, alternative and eco-friendly drive-system functional and attractive for the client. I classified the cylindrical air tank as the essential and most recognisable design element. The ellipsoidal openings are both housings for the front and rear lamps as well as air pressure cartridge holders. Because of the modular and flexible fueling concept, this vehicle is extremely light when used in the city. Long-distance journeys are accomplished with two or more air pressure cartridges. The 'air-stations' are located below the earth surface, fully automated and operated by robots. At the air-station, existing air pressure cartridges can be refilled with compressed air, additional cartridges loaded up and dispensable ones unloaded. The novel access concept consists of a divided horizontal frame, over which a fabric is stretched. If the vehicle is locked, only a single door slit is visible.

Daniel Keetmann presented 'Digital Sportiness' a drive-by-wire-interior for a sports car. As there are no mechanical connections, there is greater flexibility in the placement of components. The instruments are bigger and set far forward from to the driver for better eye focus adaptation. The interior has a spaceframe structure with two independent cabins for passenger protection. The seats are fixed - only the steering wheel with its electromechanical force-feedback module can be adjusted. A multimedia unit projects an operating environment in the driver´s sight using a holographic panel, and the command system uses finger tracking technology.

Chung-Won Kim proposed a personal sports aircraft. "My concept is based around the lying position of the pilot, which is intended to enhance the feeling of freedom in flying. The dream of flight was always connected with the idea of flying like a bird, so this position for the pilot is natural and quite logical.

Oliver Samson's project reflects the idea that a human being and a car should melt together to create a perfect symbiosis. The visual appearence of both should fit together and underline the functional symbiosis. 'Splendor' - the comic hero had a bad accident in his youth, and is now loaded with electrical enrergy. He transfers this power into his car, so the car doesnt need an engine. The hero himself is the power source and makes the car drive. As soon as he connects himself to the car it starts to live, it actually becomes a part of the comic hero. The project shows in a rather abstract way that cars have to become much more individual in order to fulfill the customers needs.

Andy Sugata proposed a Mercedes-Benz heavy truck, showing a new form language for the brand. The concept features a modular engine system that slides forward out of the vehicle.

Graduating Masters student Jung-Ho Jun proposed a Lotus sport-limousine. "The philosophy of Lotus is based on function and lightness, and I have tried to achieve the required volume and length of a four-seater vehicle, while using graphic elements, color harmony and contrasts to keep a light and sporty impression."

For the Isuzu-sponsored 'Supertruck' project the 5th semester students designed exterior proposals, while the 7th semester focused on interior design.

Andrew Hart-Barron presented 'LSV', a lightweight sports vehicle designed for both driving and flying enthusiasts. The ultra-light aircraft is easily converted to exciting road transport - with both vehicles minimal in construction to maximise fun. The pilot's position also intensifies the experience. The concept closely follows that of the Super 7 - a track machine that you can drive to the track - the LSV concept is an aircraft that you can drive to the airfield. The wings would be stored or even hired, and different wings and engines could be used to customise the vehicles performance on the road or in the air.

The Pforzheim Transportation design department is located on the outskirts of the town of Pforzheim, on the edge of the Black Forest, between Stuttgart and Karlsruhe.

The first three semesters of the Transportation Design course are taught in conjunction with the Industrial Design course, and in the 4th semester of the course the students begin to specialize in Transportation Design. During this semester the students develop their design projects from 2D to 3D using digital models rather than clay, using Alias|Wavefront Autostudio for modelling, packaging studies, renderings and animations. Only in the 5th semester do the students develop their projects with the use of clay models. This emphasis on digital design techniques early in the course reflects the changing nature of the automotive design process. 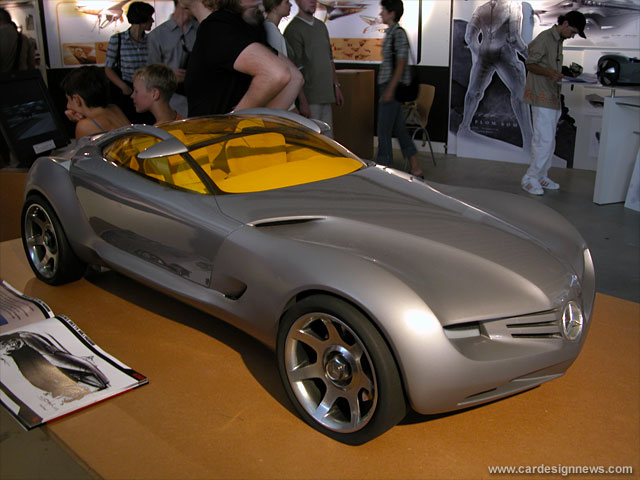 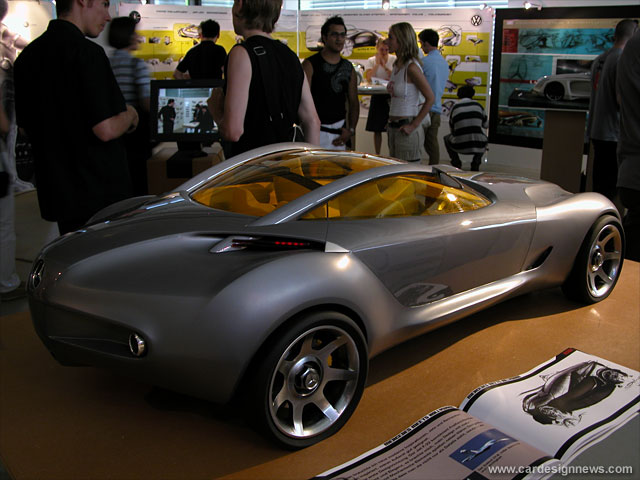 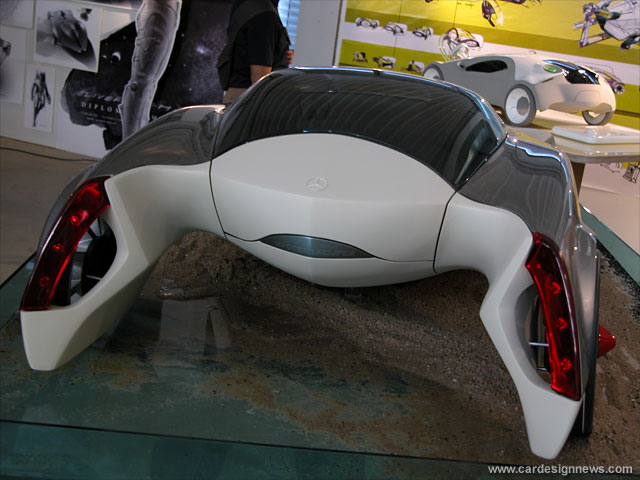 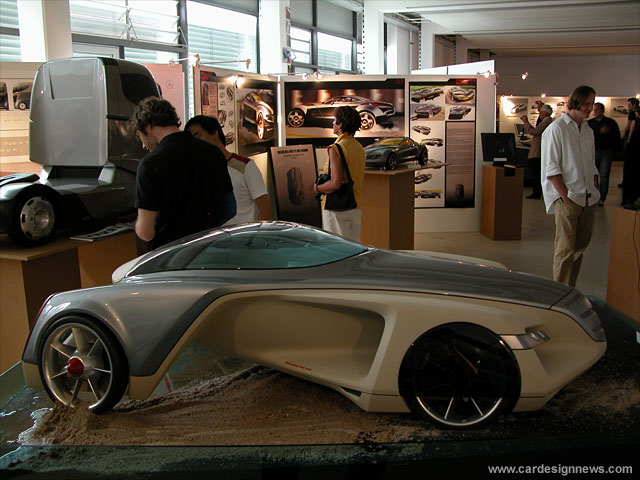 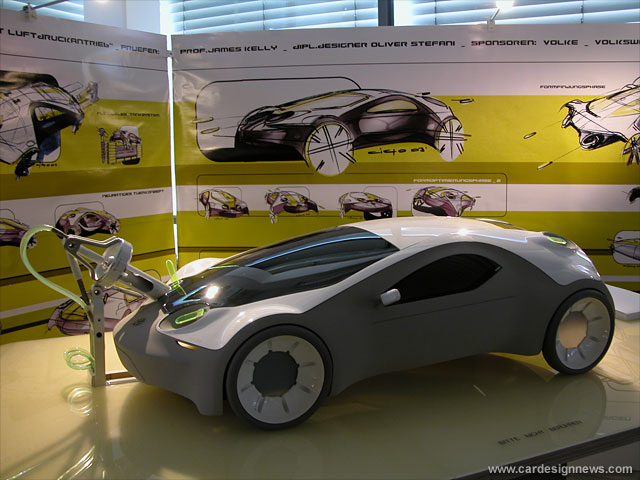 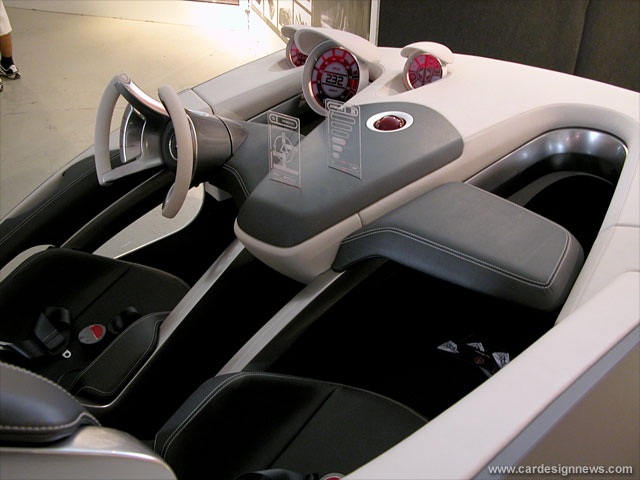 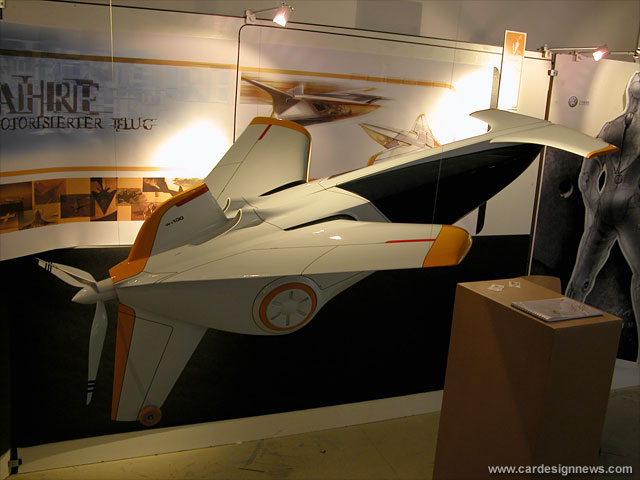 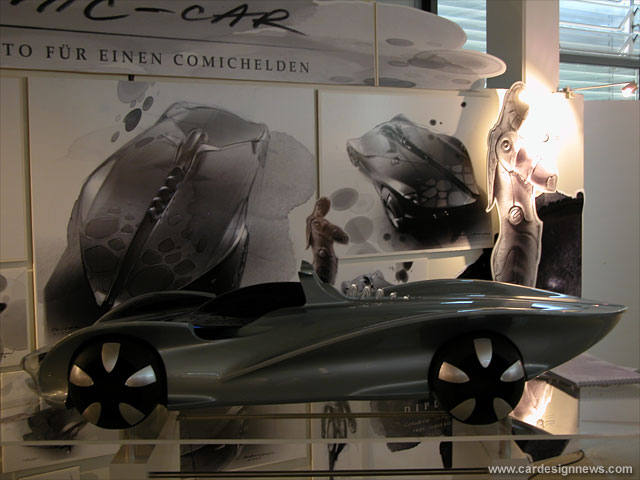 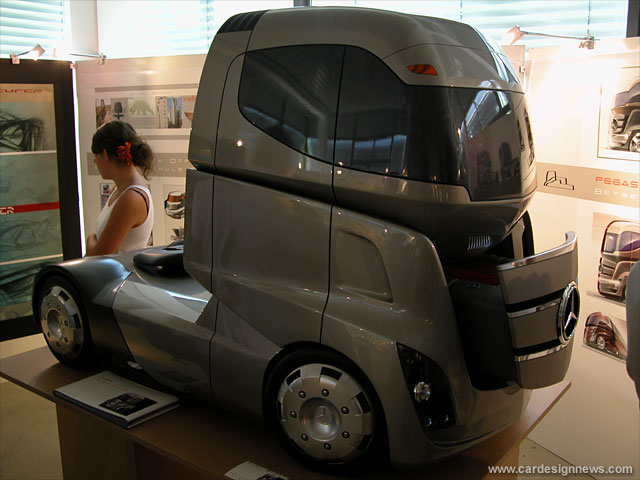 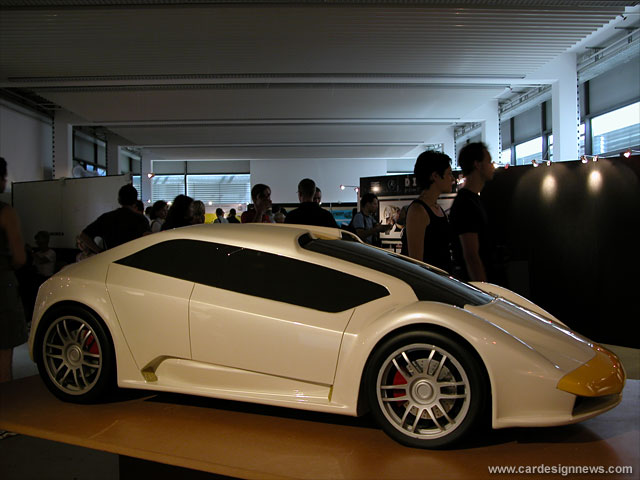 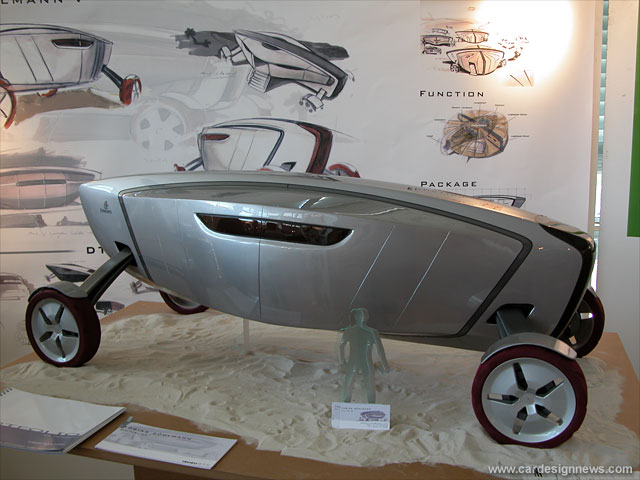 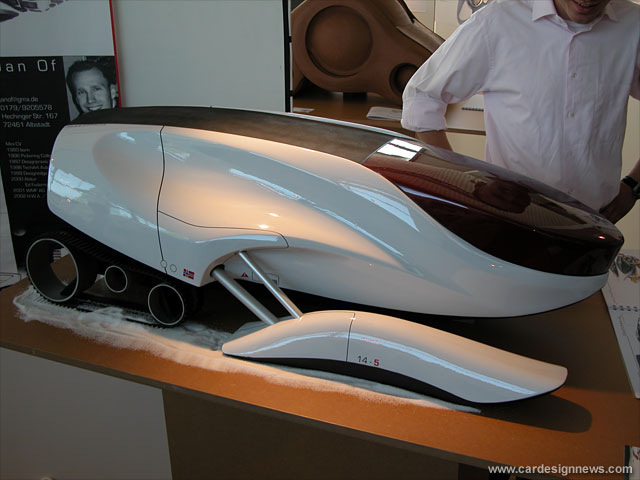 'Polar Express' by Jan Of 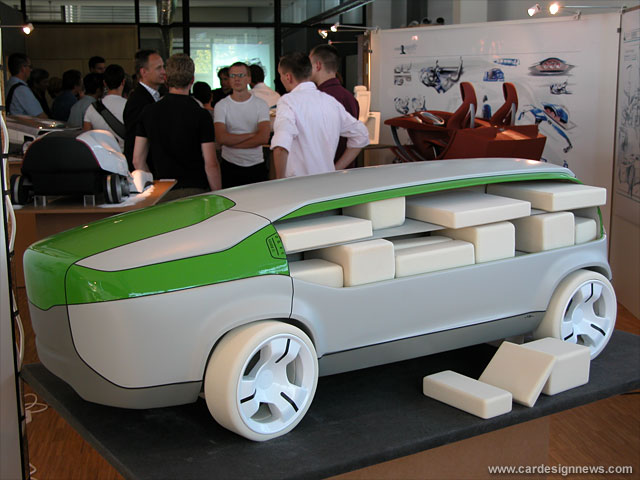 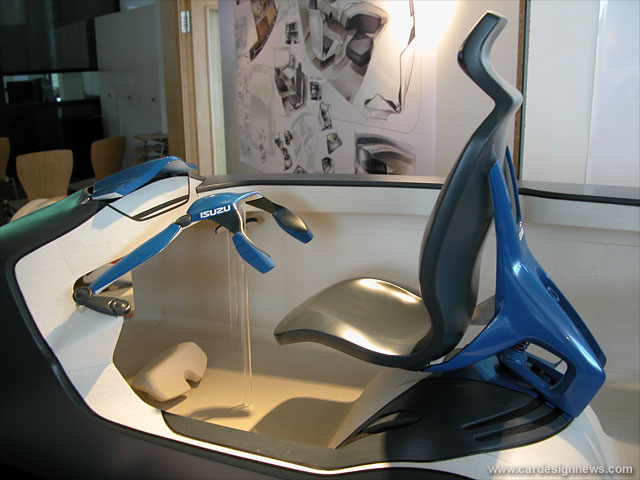 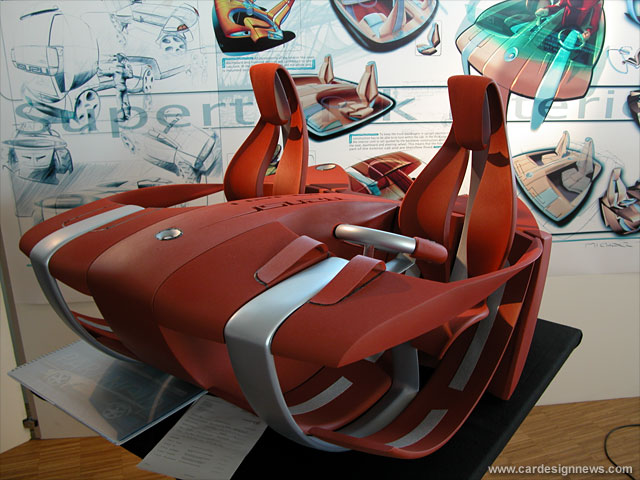 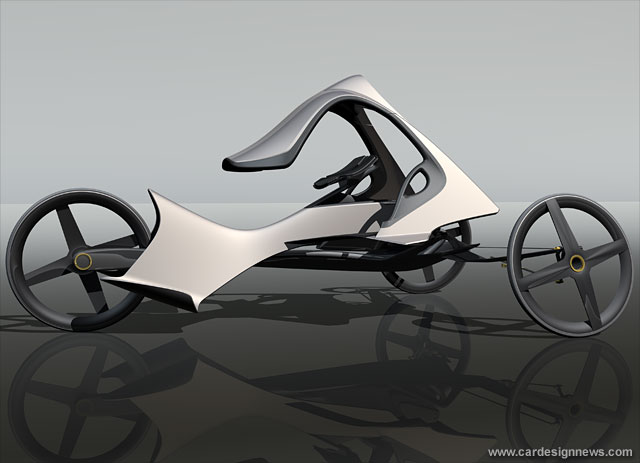 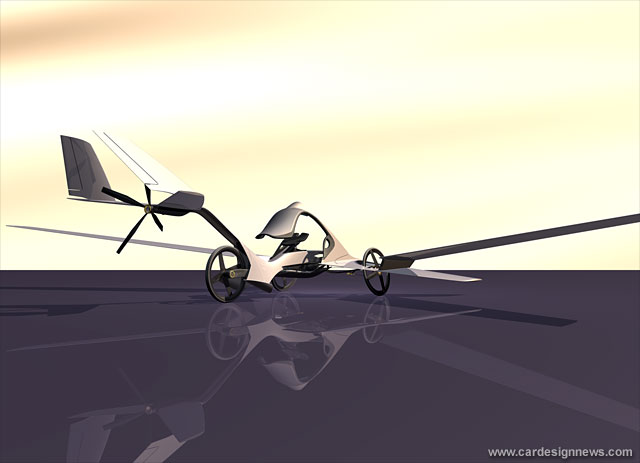 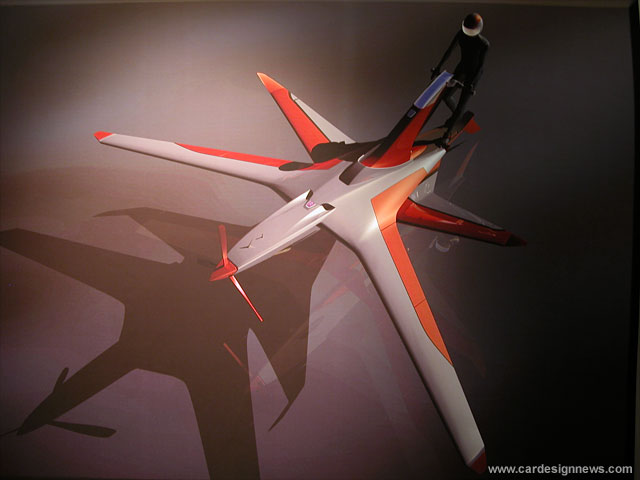 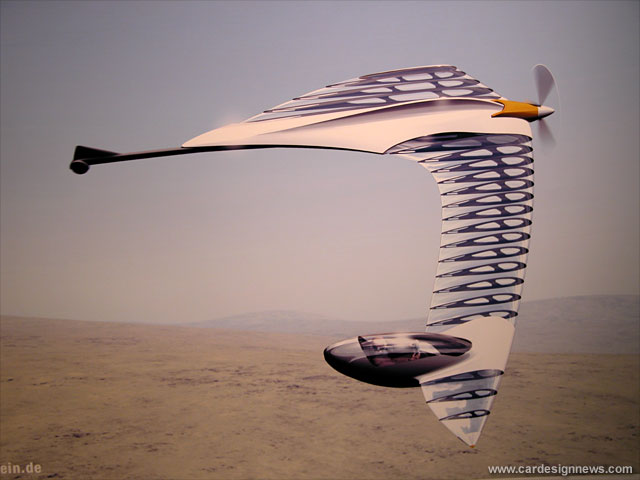 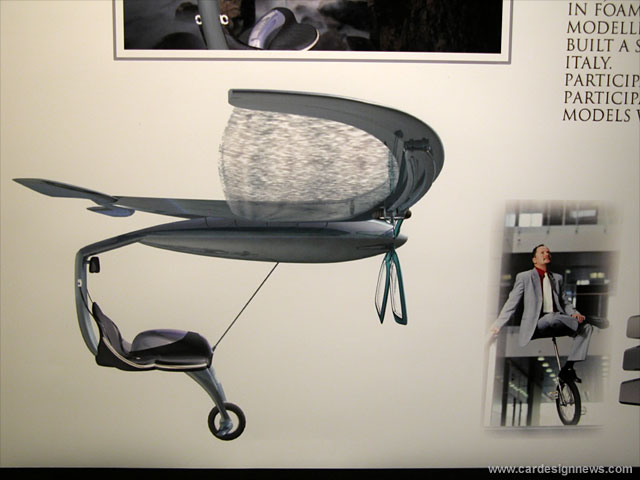 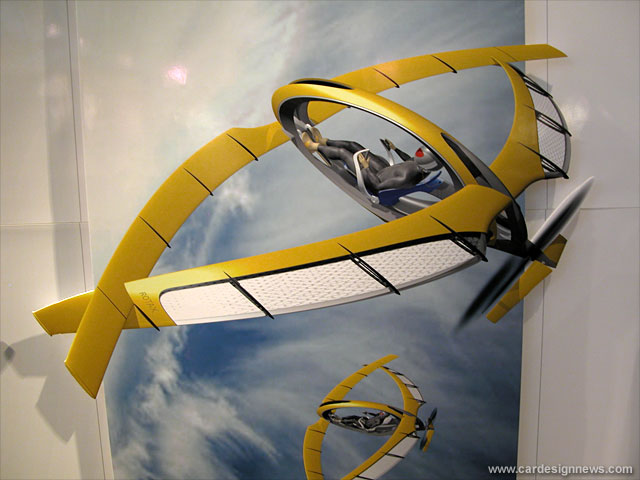