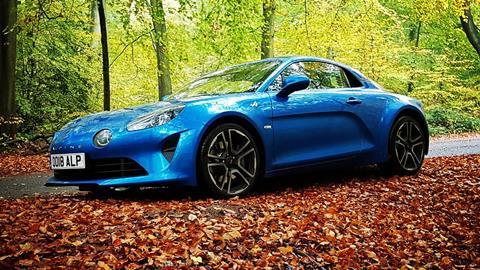 Alpine’s successful return has been one of the sensations of the past 12 months. Renault’s decision to revive a brand that previously hadn’t produced a car since 1995 and repurpose the famous Dieppe factory for once again building cars with that italic ‘A’ on them, has arguably been the only truly fresh thing to happen in the realm of sports cars for the past five years. 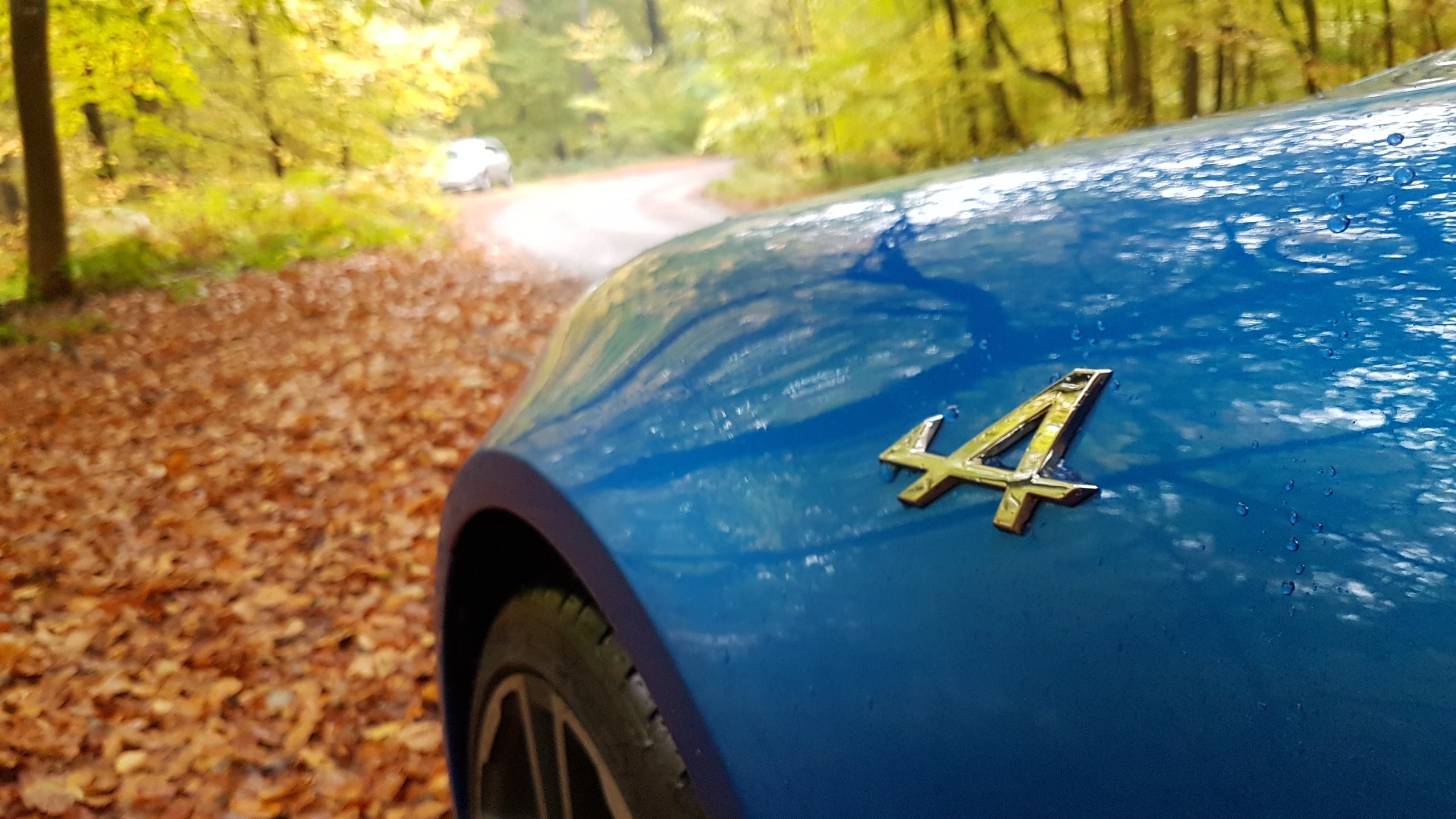 It’s not just about brand nostalgia, either; in our most excellent and splendid yearbook (which, we hasten to add, is still available), an 18-strong panel of some of the highest ranking active car designers voted the A110 as the third-best overall production car design of 2017. We’ve gone in-depth with the runner-up (Volvo XC40) and the winner (Range Rover Velar), so let us now complete the podium… 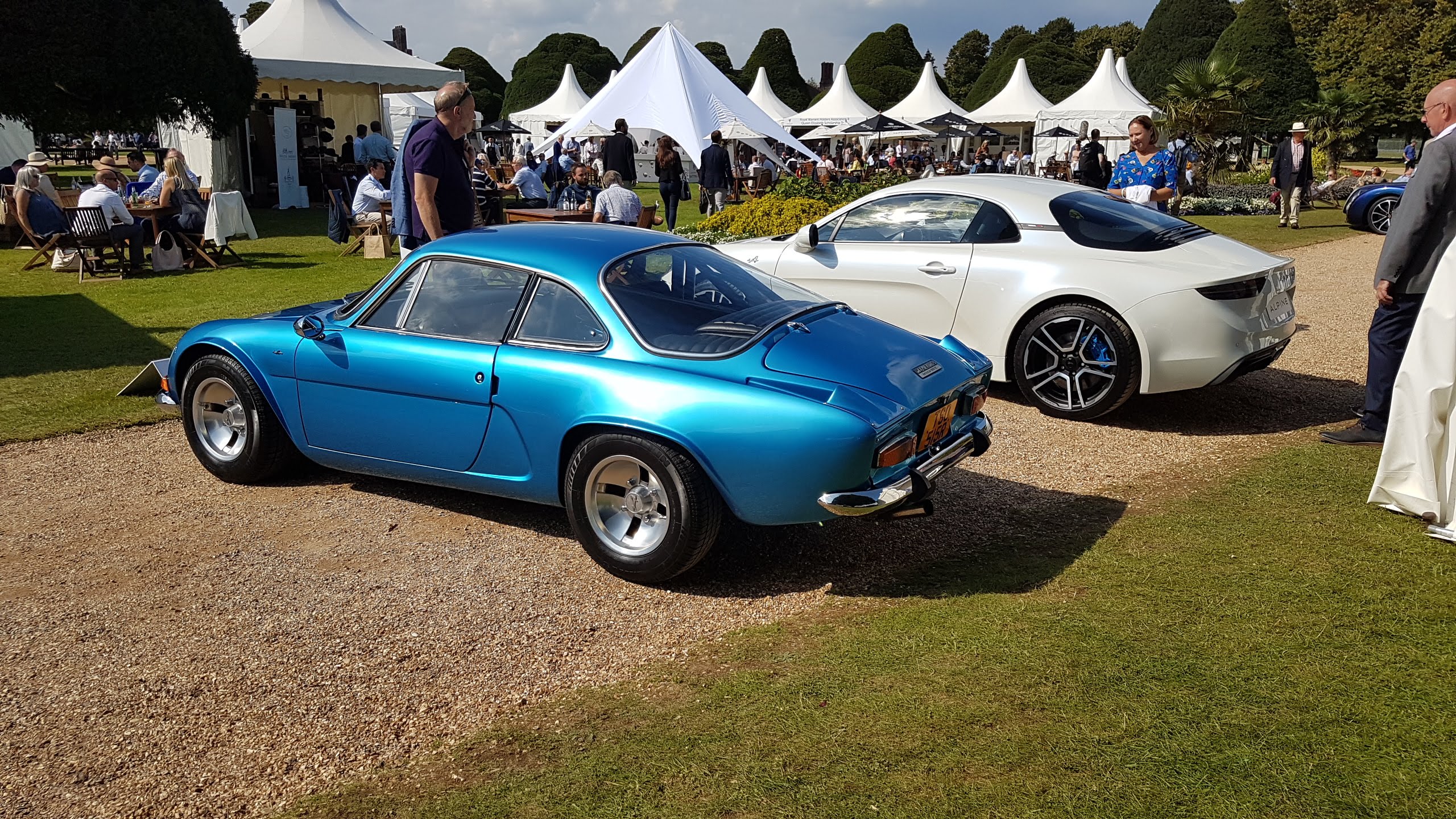 As the name strongly implies, the A110 is a 21st-century take on the original Alpine A110 Berlinette, the miniscule rear-engined coupé that won the inaugural FIA World Rally Championship in 1973. The present-day version takes graphical inspirations from the ‘70s car (DRG, DLO, bodyside surfacing) and applies them to clean-sheet, modern proportions. Its engine is now ahead of the rear axle, not behind it, allowing a shorter rear overhang and more compact silhouette (in isolation). 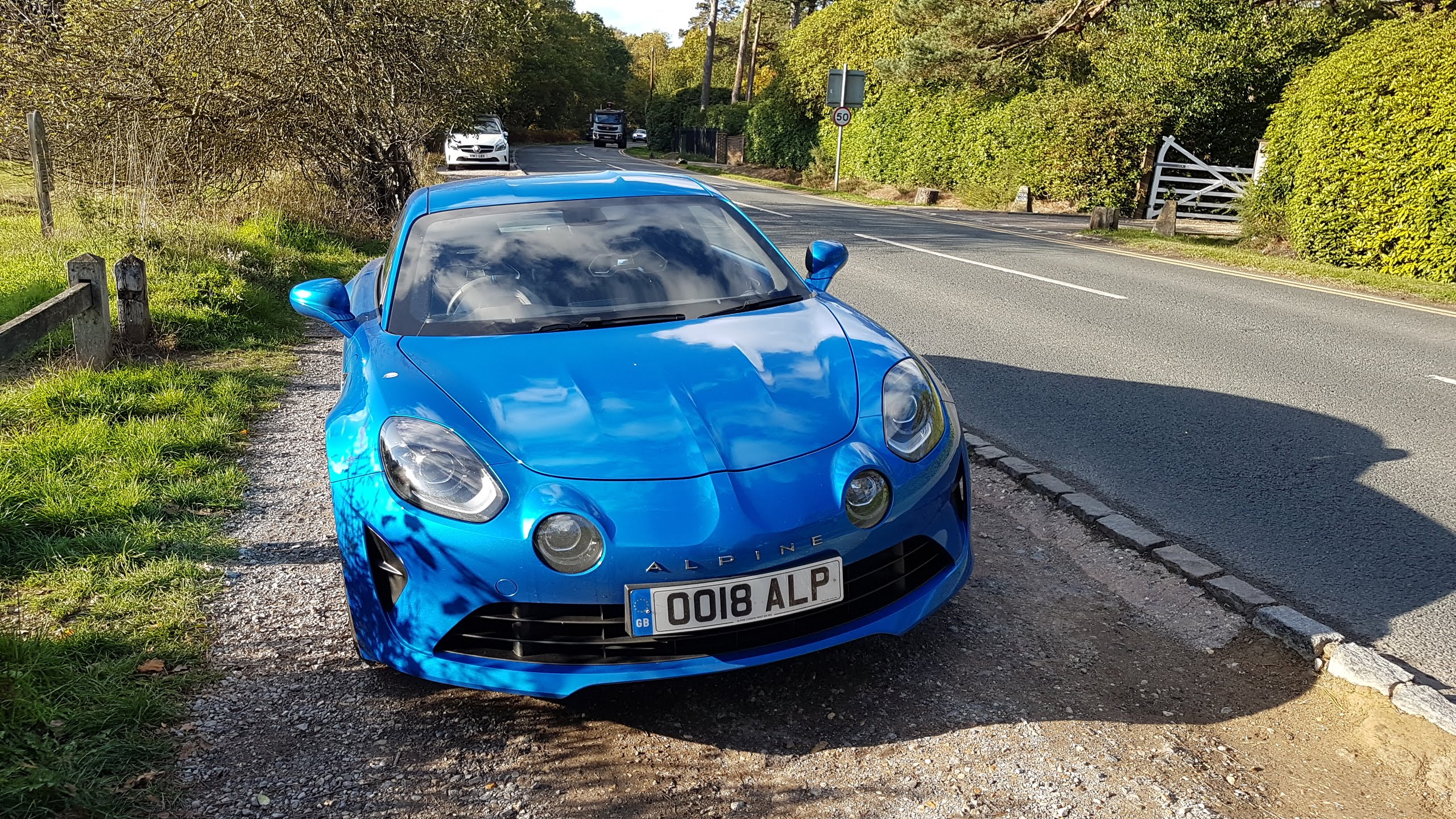 The cut-ring-quartet daytime running light signature gives the A110 an unmistakeable look on the move up front, with inspired stretched-X tail lights achieving similar at the back. More subtle tributes to the original include little ridges on the bonnet, halfway between the centreline and the shutline, which echo the external chrome hinges on the old rally star. The wheelarch flares have presence and improve the stance without looking cartoonish – and frankly the rear ones look brilliant in the bottom corner of each door mirror.

Perhaps the best sign of the success of this design, however, was the sight of a small child grabbing his elder relative’s arm as he jumped and pointed at the parked A110.  This is exactly the reaction – the moment of wondrous joy – that a sports car’s exterior should spontaneously evoke, and the Alpine’s did. Job done. 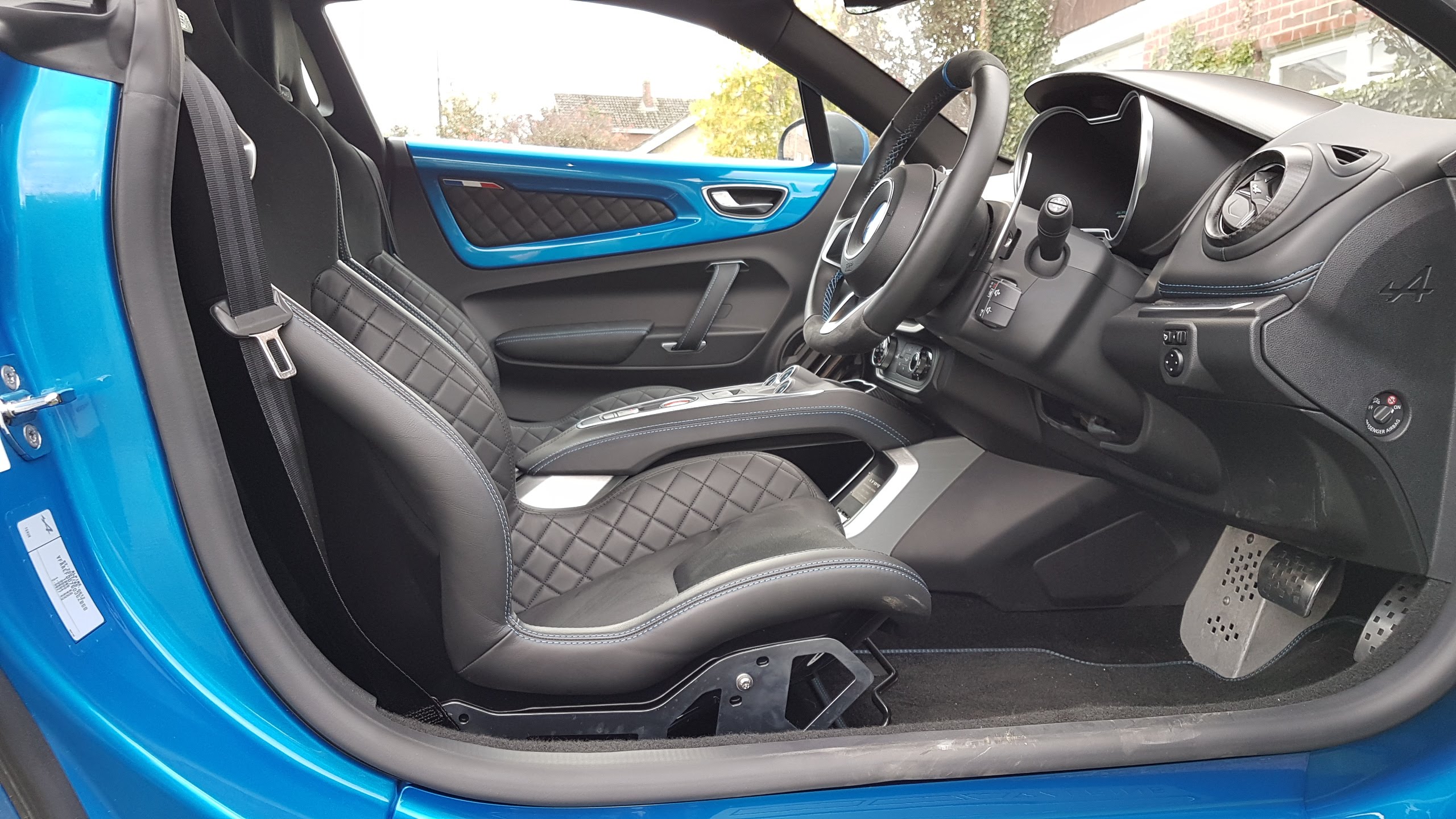 While the build quality is never in question, the stylishly minimalist cabin does comprise a slightly peculiar mix of high- and low-quality materials, the battle between design ideas and manufacturing costs arguably on clear display in places.

The occupants sit on fantastic custom-engineered Sabelt bucket seats with a partially-exposed aluminium frame and just enough padding in the right places – under suede and quilted leather upholstery – that they never cause aches or pains. They weigh in at 13.1kg each, around half what an off-the-shelf bucket would’ve weighed, and despite being a fixed-back single-piece design they manage to put occupants in an ideal position.

These, along with the aluminium pedals and footplate, plus (token, but genuine) carbonfibre trim on the vents and atop the aluminium-framed centre console, feel like quality motorsport-derived parts.

From there, it starts to slip gently downhill. Behind the smooth leather-and-suede steering wheel, the metal gear shift paddles are just the right size and nicely tactile – but when you pull them, the shift mechanism to which they connect doesn’t feel as metallic as that initial touchpoint promises, which is a bit of a shame. 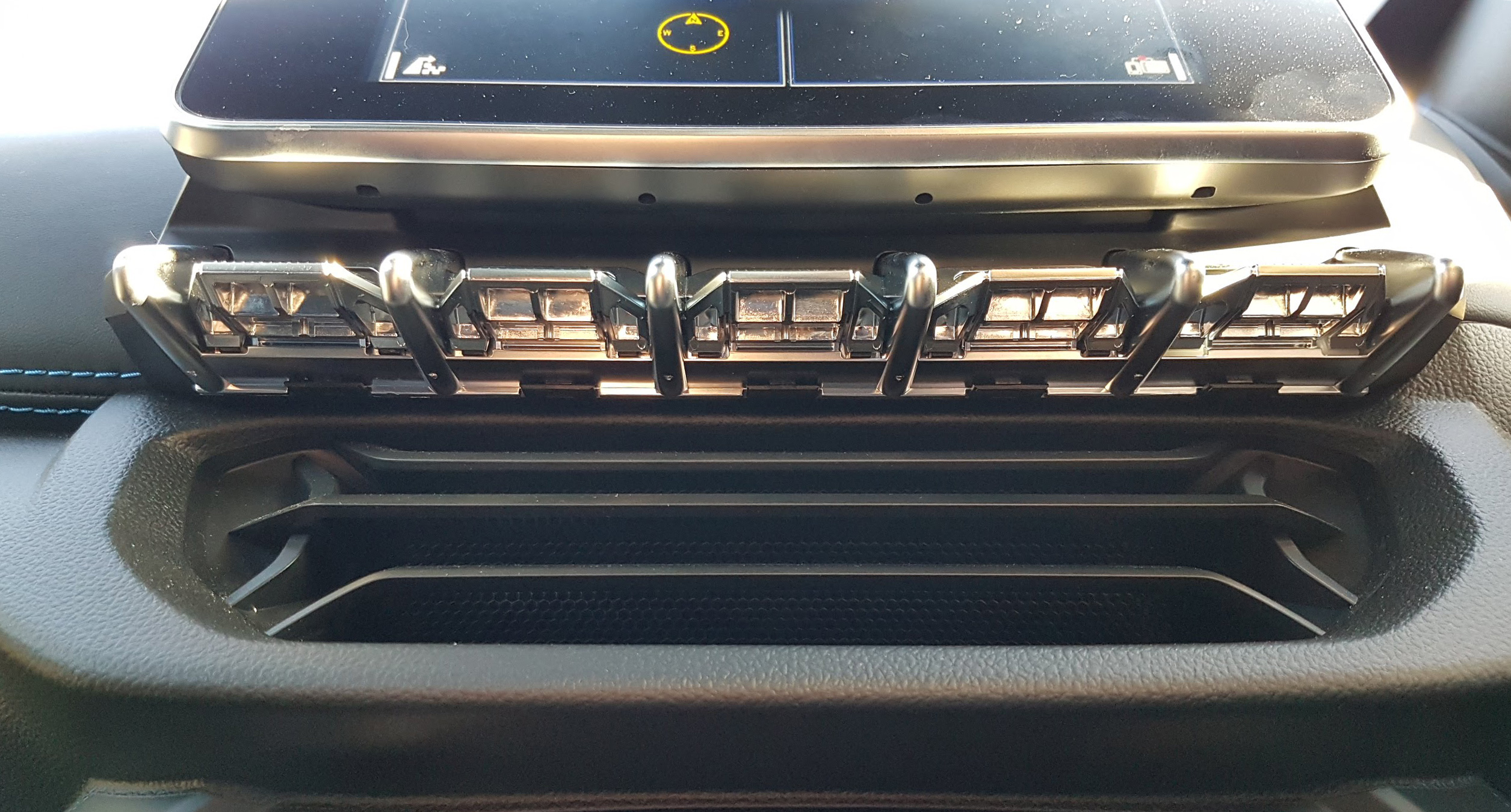 The switches beneath the centre touchscreen look like beautifully detailed metal pieces, right up until you touch them and they immediately feel like thin bits of plastic. Because they are. The body-coloured inserts at the top of the door panels look brilliant, but are also quite hard plastic. The HVAC knobs don’t feel that solid, while the column-mounted media controller has the texture and soft action of a chunky old PC keyboard… 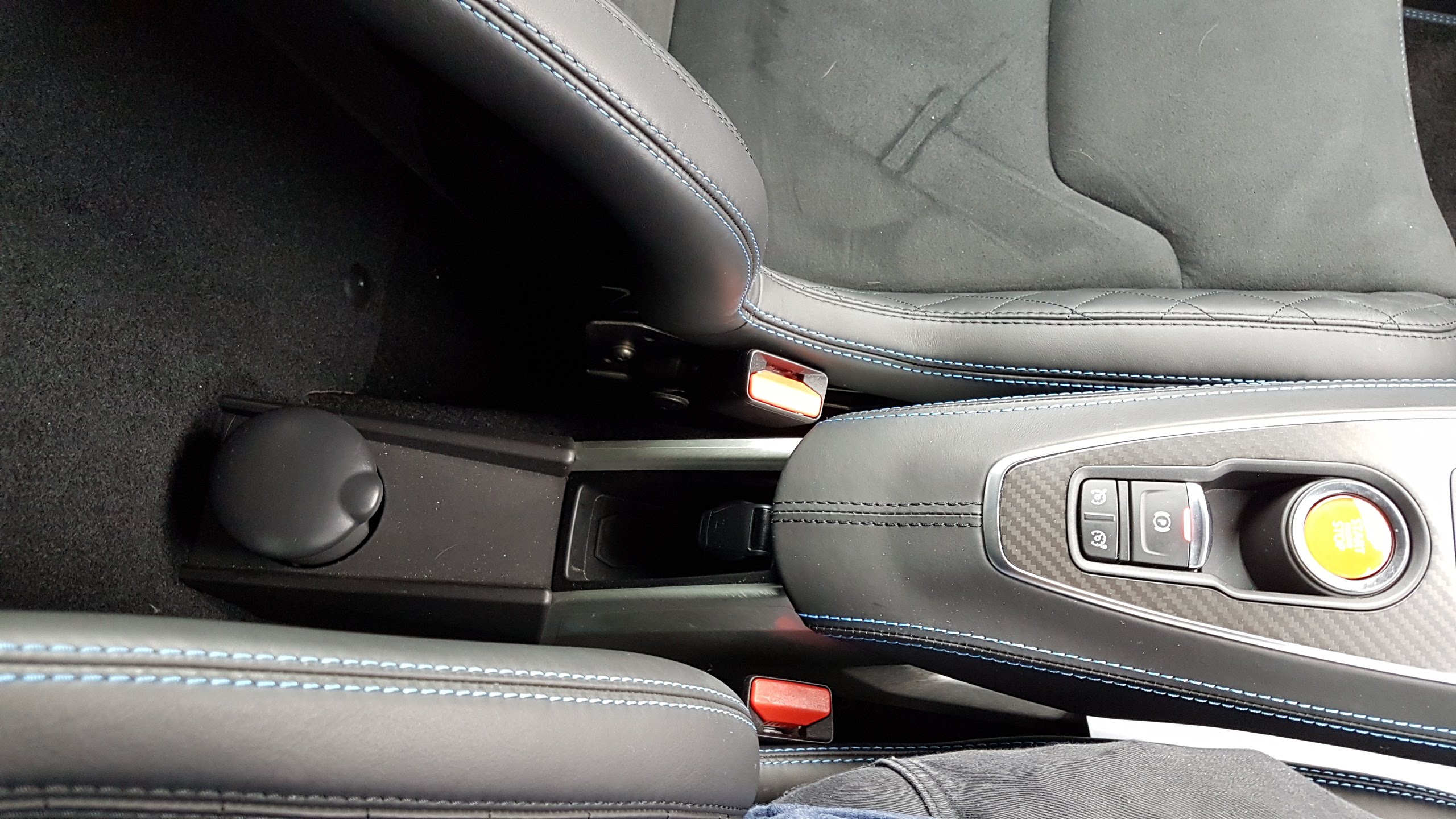 Elsewhere, there is but one cupholder, right at the back of the centre console, demanding that you reach awkwardly around the seat bolsters. The on-screen graphics for the IP and infotainment system, by contrast, look smart and are crystal clear – which was an important thing to get right given the mixed bag of materials. 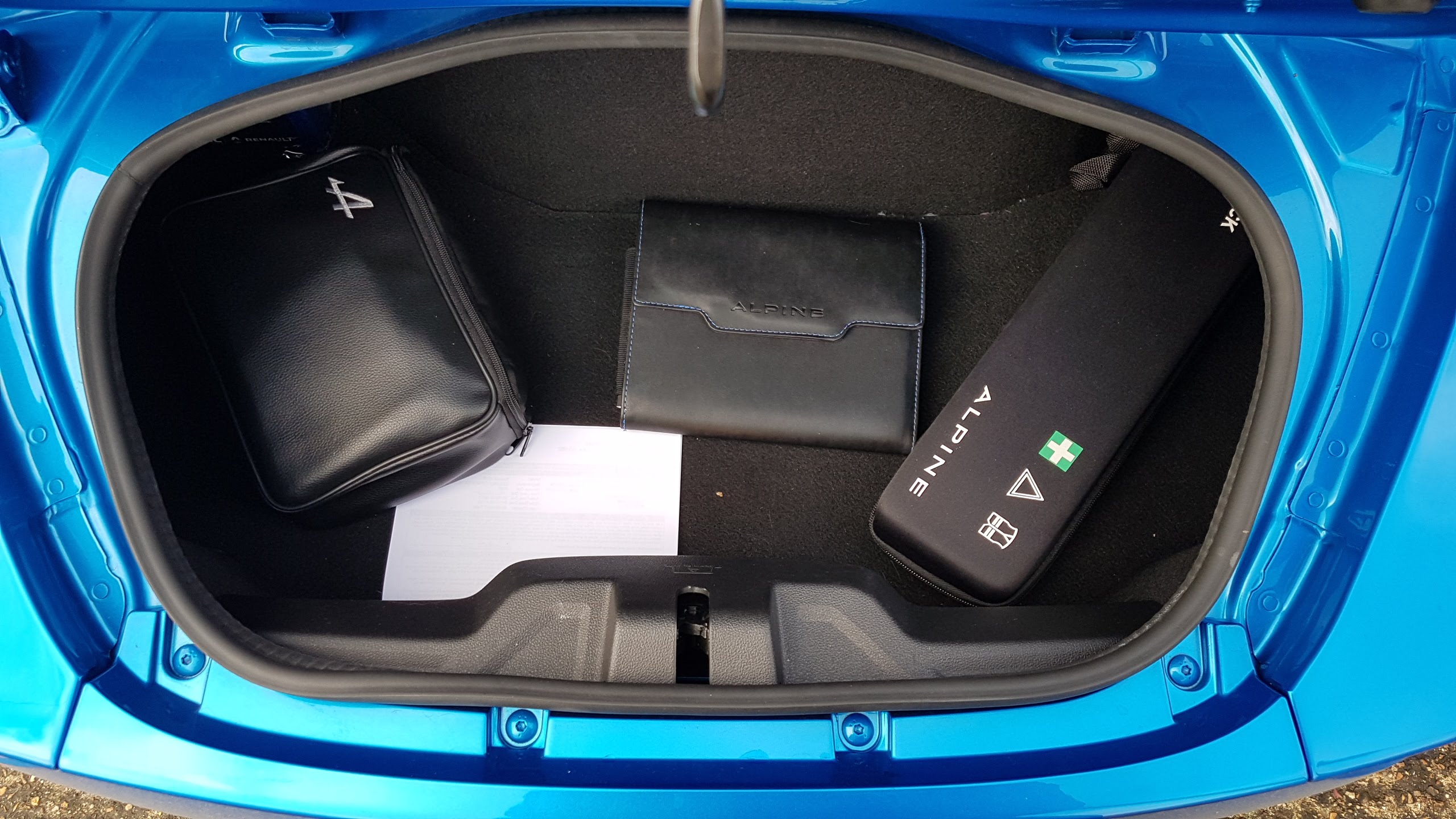 The front luggage area can take an airport carry-on bag, while the tighter rear boot (pictured) is mostly for carrying the tools and handbooks around – and gets a little warm sat above the central exhaust. There’s no interior glovebox or door pockets, but an umbrella can fit, loose, behind the seats.

When you first unlock the car ­­– using a standard-issue Renault key card hidden away in a more premium-feeling ‘A’-branded leather pouch – the centre screen plays an animation of a revolving CGI mountain range (the Alps, presumably) while it boots up. The digital IP shows a top view of the car driving into the middle of the screen from the right and rotating clockwise 90°, ready to show you if a door or lid is open by highlighting it in red, while the mileage appears on the right.  By this time the centre screen – running a different GUI from Renault-branded cars – is now showing the time of day. 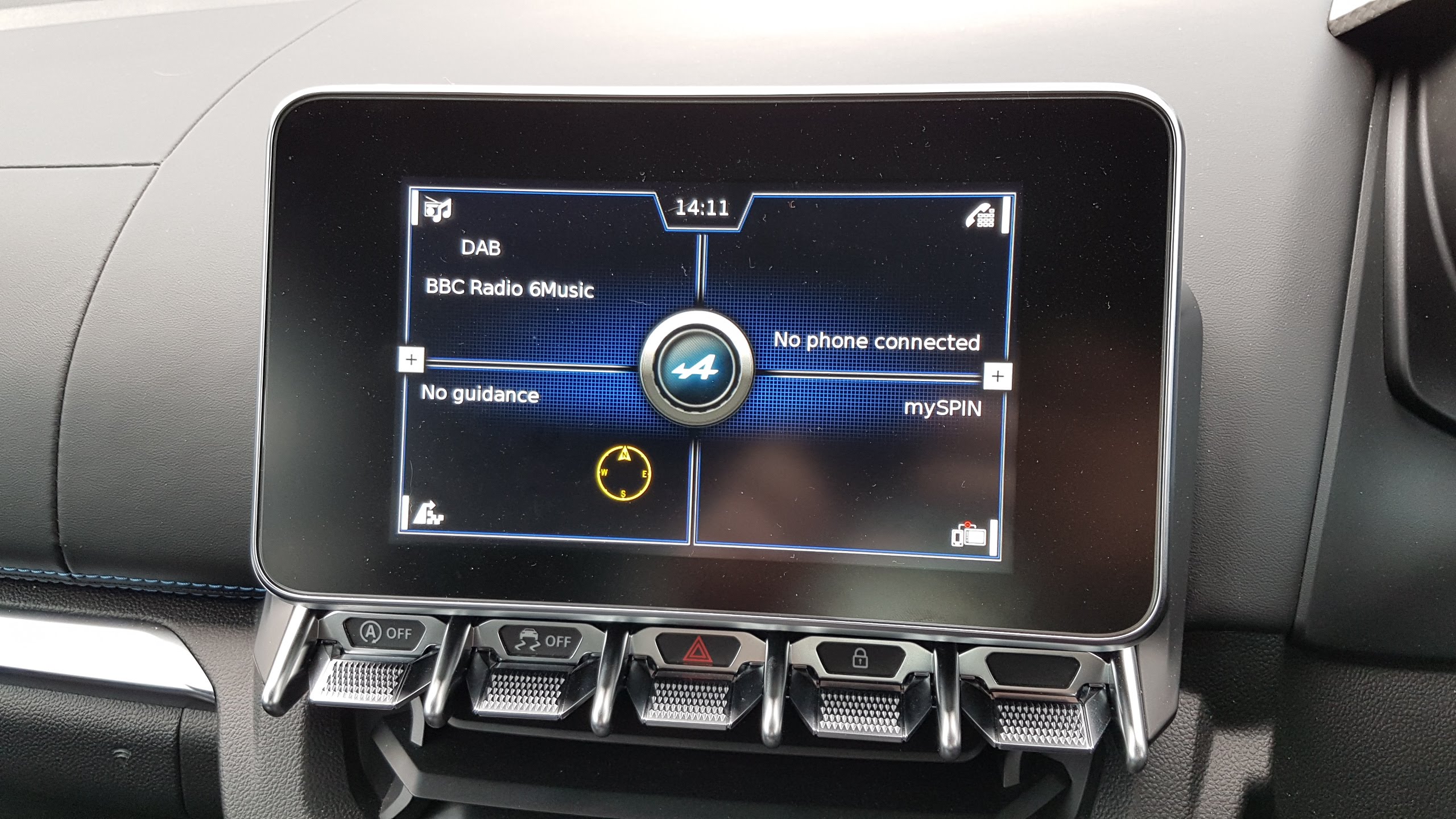 Tap the time and it’ll show you its Home view, with quadrants dedicated to radio, Bluetooth, smartphone mirroring (via the ‘mySPIN’ phone app) and GPS navigation. The digital clock atop this home screen compliments the simulated analogue clock nestled right-of-centre into the top of the IP. At the centre of it all is the circular ‘A’-branded shortcut to the ‘Alpine Telemetrics’ system – essentially a reskinned derivative of the ‘R.S. Monitor’ real-time performance data screens you find in a current Renaultsport Clio 220 hot hatch.

The seven-inch touchscreen has a satin finish to it, and requires a pretty firm press for anything to happen. There is no permanent ‘back’ or ‘home’ button on screen – to exit an area of the user interface, even some settings menus therein, you must push one of the white ‘+’ boxes on either side of the screen, then press the house icon that appears over the top – always on the passenger’s side – to return to the home screen (the same goes for on-screen volume adjustments). 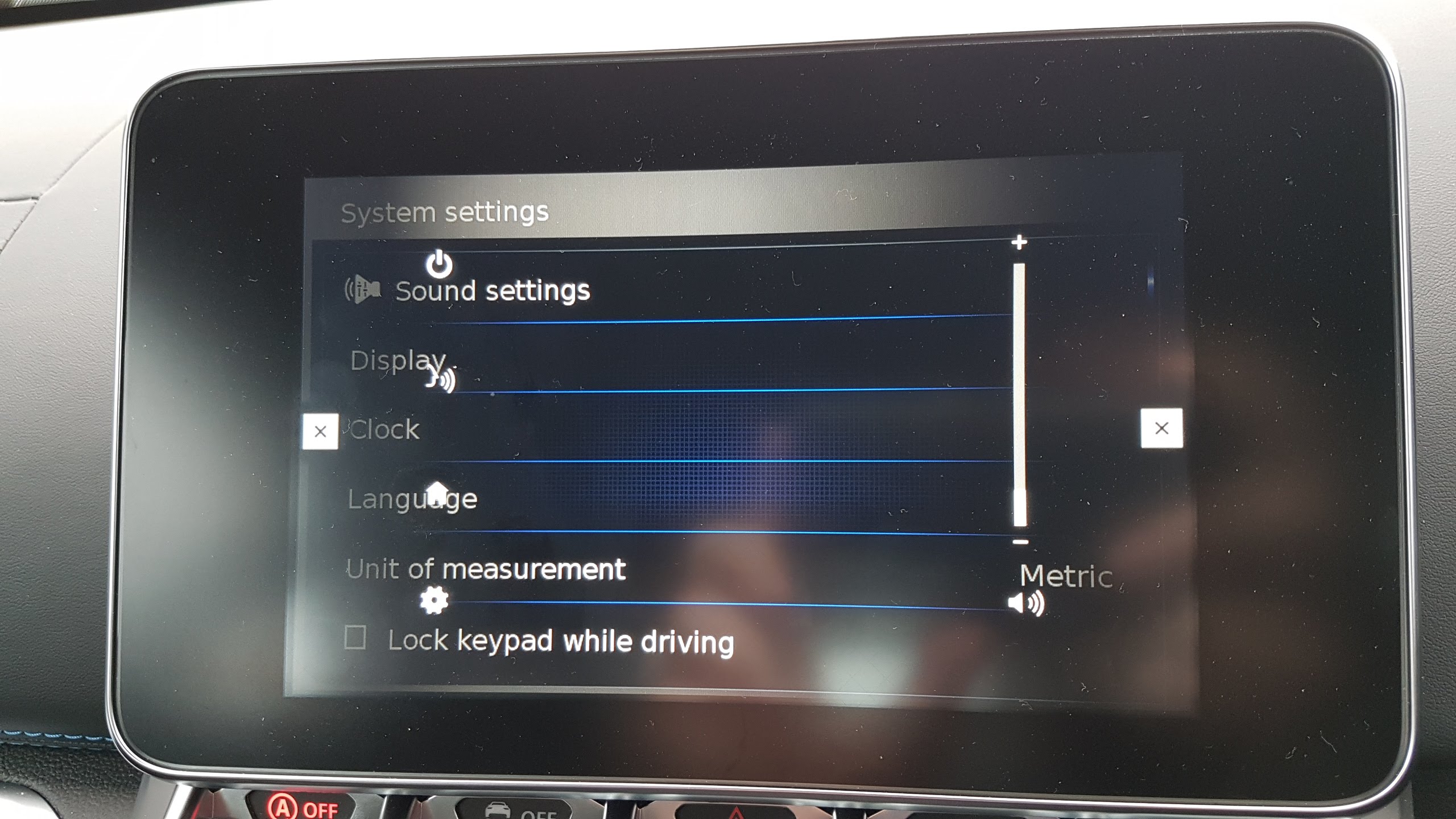 That said, if you want to go straight from, say, radio to phone, then three rectangular shortcuts are sitting in the top corner to facilitate jumping between functions… although these disappear if you enter the Telemetrics programme. 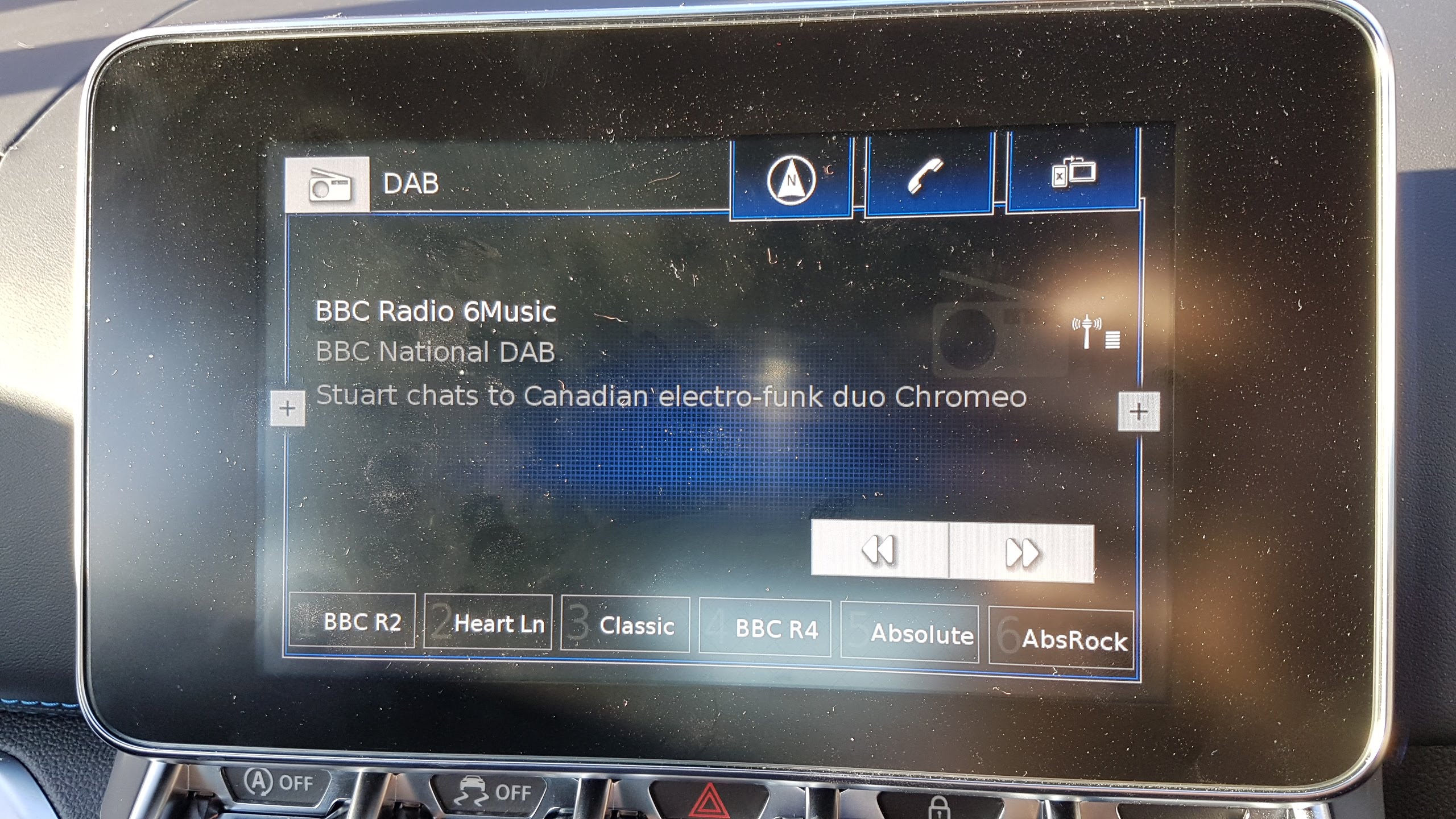 Some live vehicle data can be accessed on the IP in front of the driver, though, by scrolling with the buttons on the wiper stalk – including trip data, fuel data, a live G-meter, a compass(!), basic radio info and a digital rev readout to the nearest 50rpm.

The Bosch ‘mySPIN’ mirroring app works reasonably well – once you’ve fumbled around plugging your phone in via USB in the area underneath the centre console – but isn’t as organised or intuitive as Android Auto. The navigation, while competent, is similarly outclassed by the benchmark third-party system. 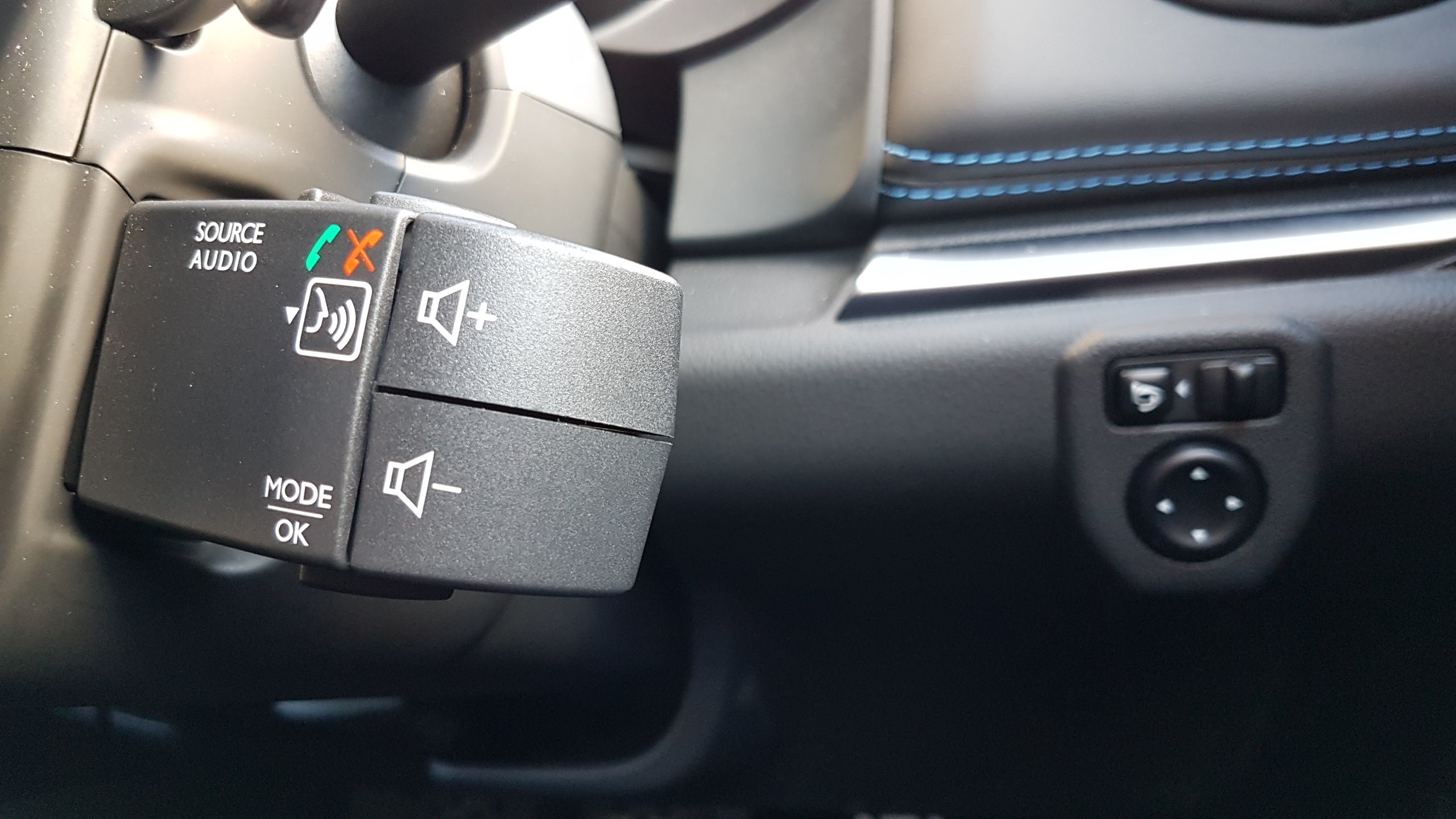 The chunky plastic module on the lower-right side of the steering column – a Renault carryover – can be used to enter and cycle through the telemetrics screens, as well as scroll through different media or radio options and adjust the volume directly. Given how often it’s likely to be used, it deserved to have more money spent on it. 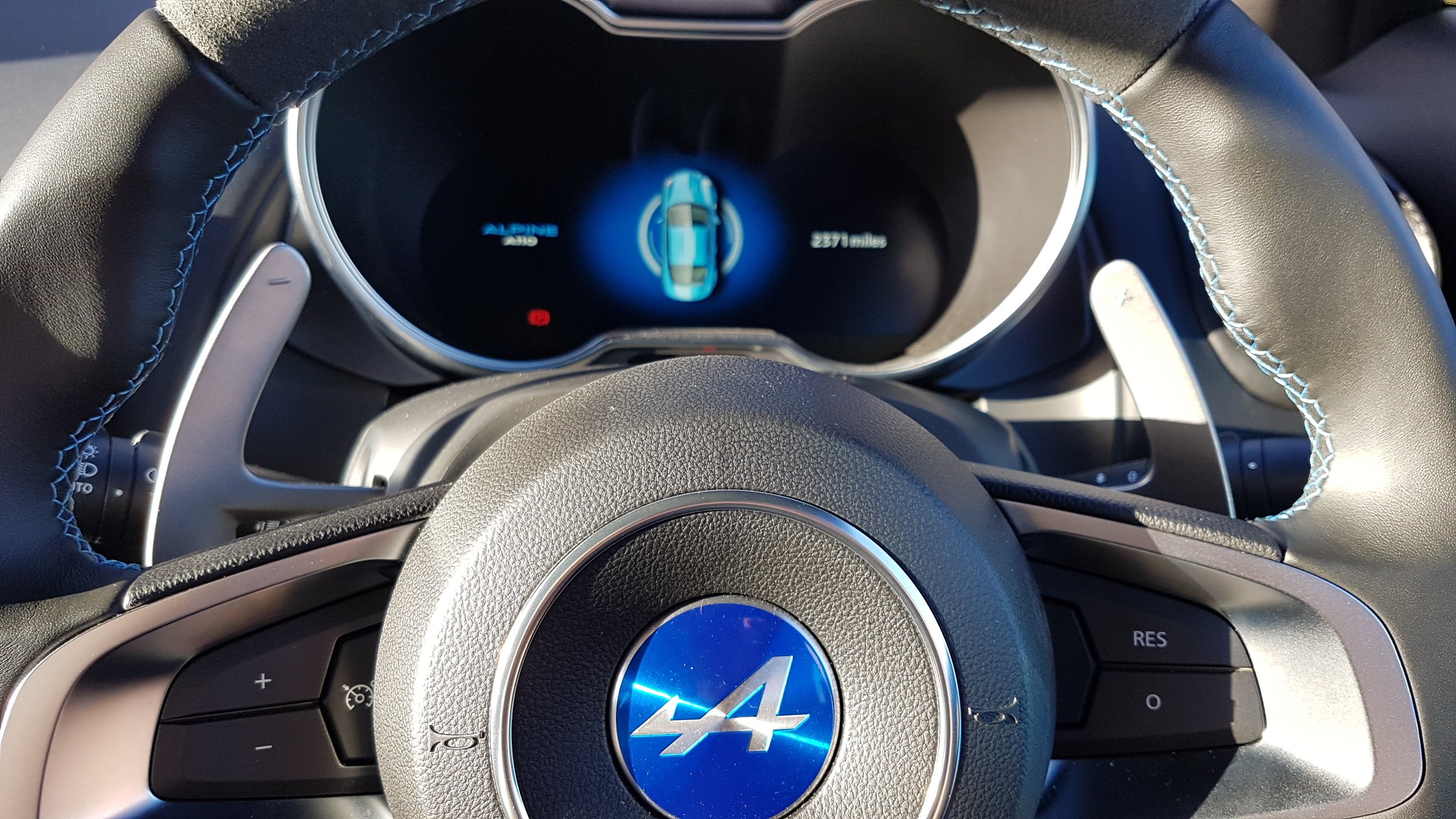 It may seem harsh to scrutinise a two-seat mid-engined sports car for its interior plastics and slightly baffling media ergonomics, but it matters because this is conceivably a lightweight sports car you could use day-to-day, pitched somewhere in the middle on a spectrum between the Lotus Elise and the Porsche 718 Cayman and priced like the latter. Thus, the everyday parts will to matter to many buyers as much as the 1103kg wet kerbweight, flat-floor aerodynamics and bright orange wheel-mounted Sport button… 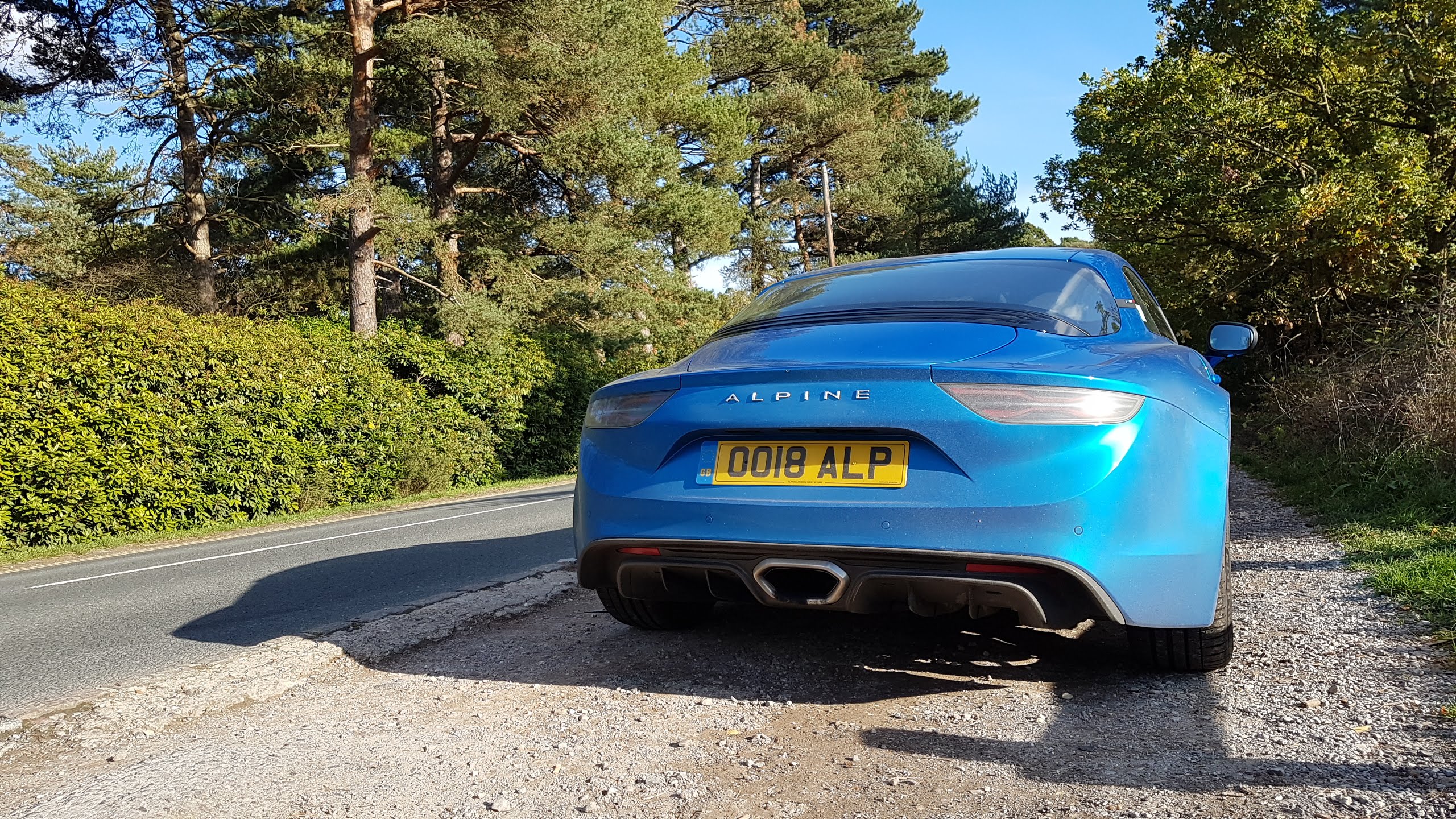 …however, it is of course engineered for far more than the commute route, and while we haven’t driven a 718 Cayman for comparison, we can tell you this: once you get a chance to send the Alpine down your favourite backroad, you will immediately stop caring about plastic screen controls.

The transmission defaults to automatic, is smooth and knows what it’s doing. Override it with a paddle, and the white ring of light around the ‘D’ on the tunnel turns blue. You then have around five seconds to press the ‘D’ and lock it into manual mode (otherwise the auto takes over again). The 1.8 turbo engine punches hard when asked, but there’s almost a second of lag before it does – more if you’re in auto and ask it to ‘kick down’ first – and ultimately it’s not the star of the show. The brakes are responsive and easy to modulate. 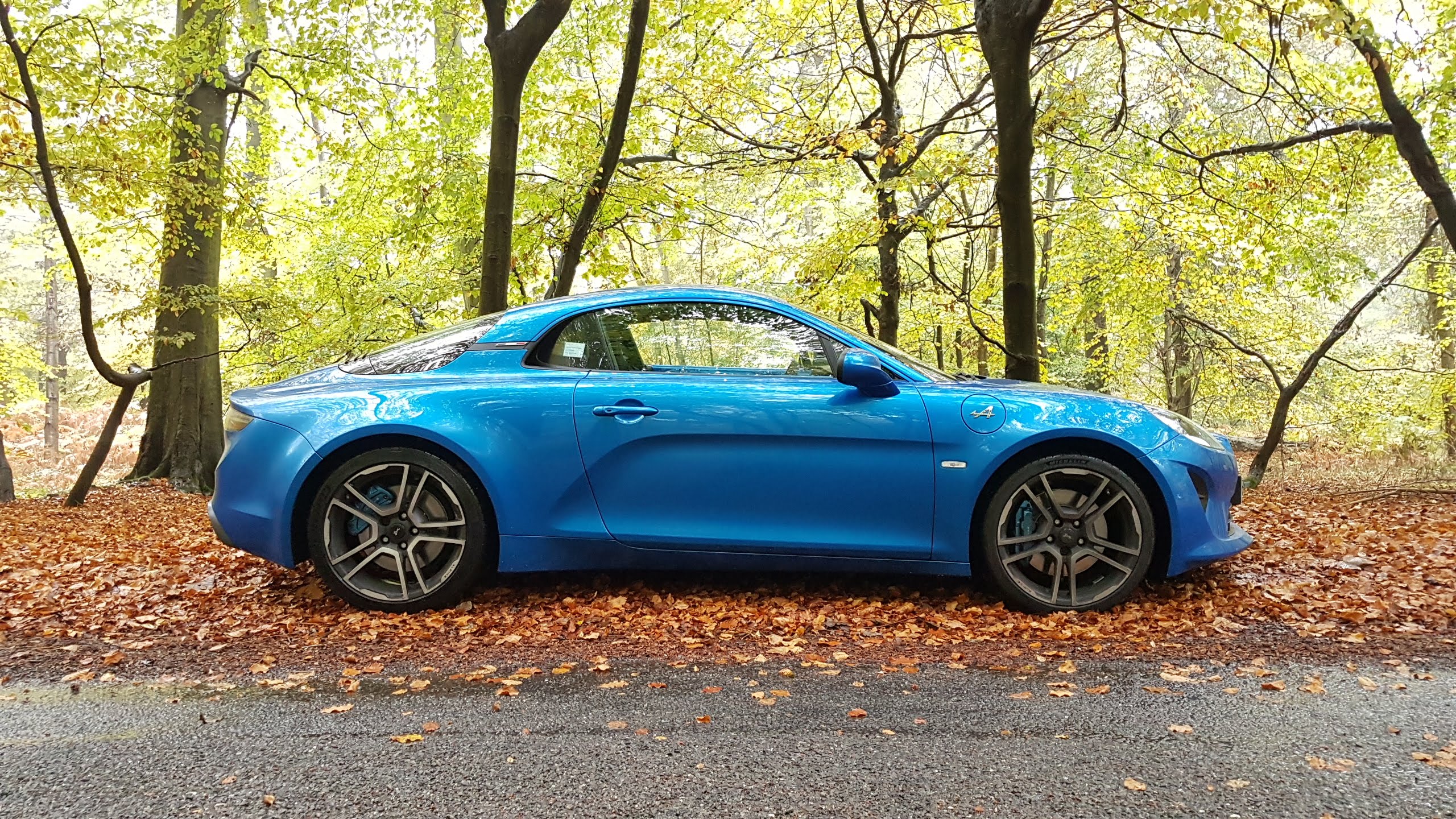 Sport mode gives the powertrain more snap, crackle and pop – that is, snappier throttle and gear-change response, plus (artificially induced) crackling and popping from the now-amplified active sports exhaust. You also get a different digi-IP layout, where the temperature and time ‘dials’ at the top are demoted in favour of real-time torque and power output gauges you’ll never read. Little racecar-style rev ‘lights’ appear between the restyled tachometer and speedometer. 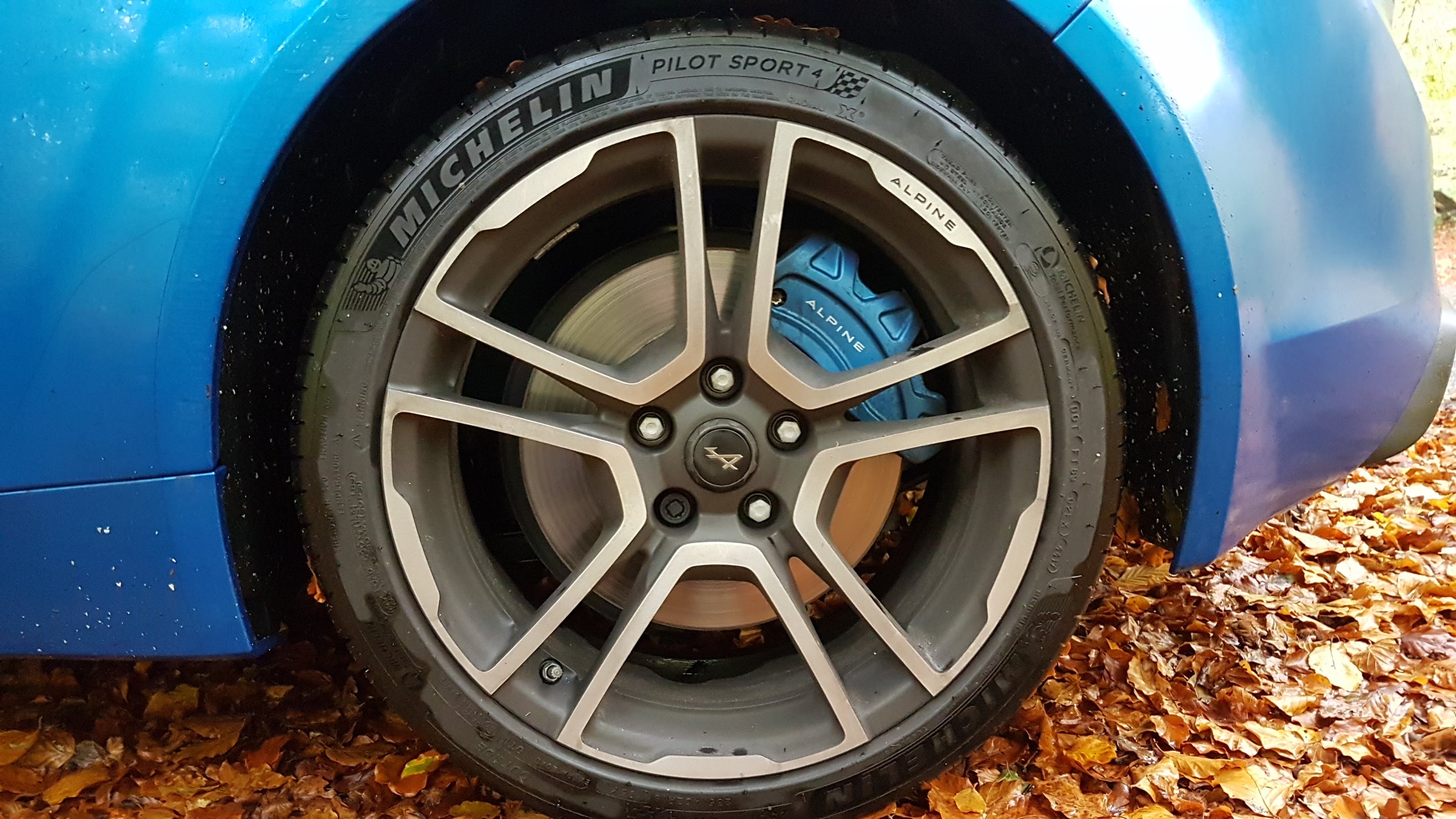 Speaking of modes, most new cars have two, three, or four different settings for their dampers (shock absorbers). The Alpine has none. Their engineers took the time to get the suspension set-up spot-on in the first place, rather than making you flick between a set of compromises, and the way it balances ride comfort with feedback and body control is just right for a sports car on UK roads.

Alpine’s engineers worked hard to get more travel into the suspension, to allow for softer damping without the car thumping into the bump stops on a raggedy B-road. This, combined with reasonably stiff springs, means the suspension tells you all about the road surface without bludgeoning you over the head with this information. It feels purposeful, but never punishing. 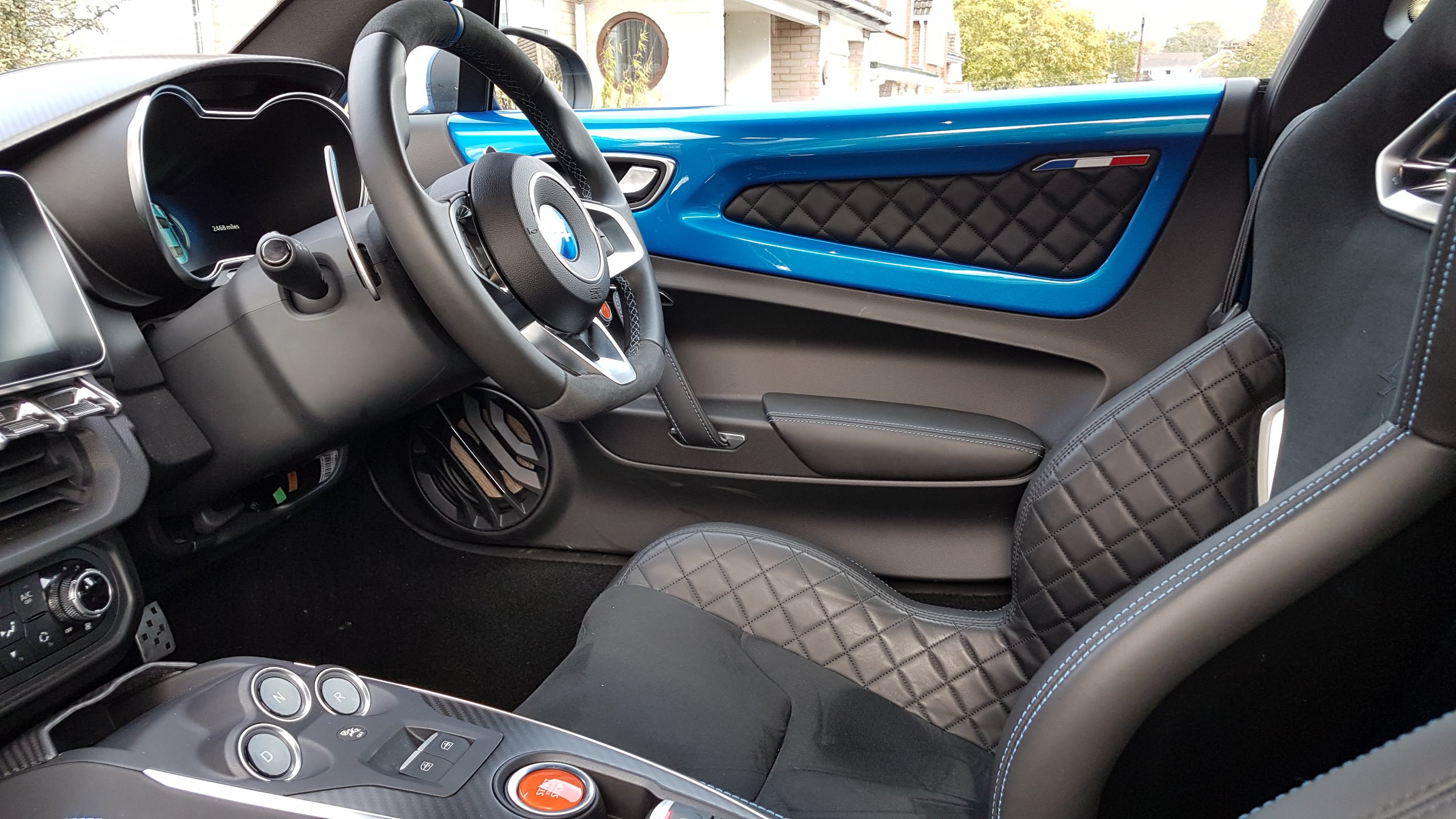 The electronically assisted steering has a similar balance of characteristics, as it can get nudged around by uneven surfaces, but remains smooth and light – arguably too light – to operate, not to mention pinpoint accurate. The turning circle is remarkably good, too. 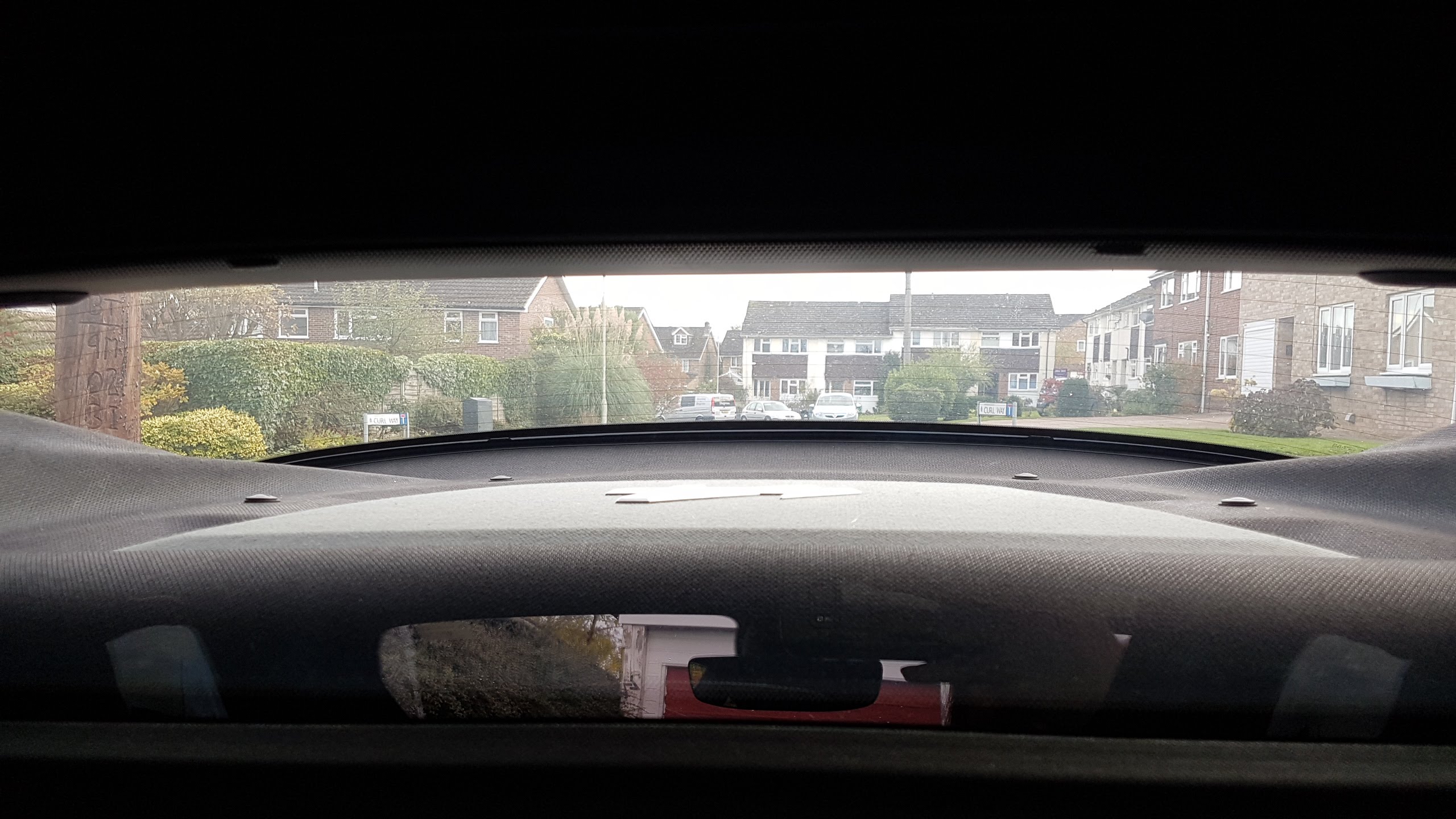 It’s just a shame the rear window is made a bit too narrow by the turbo cooling fans hidden under the grille at its base, as the reduced rear visibility and lack of parking camera make reversing less friendly. 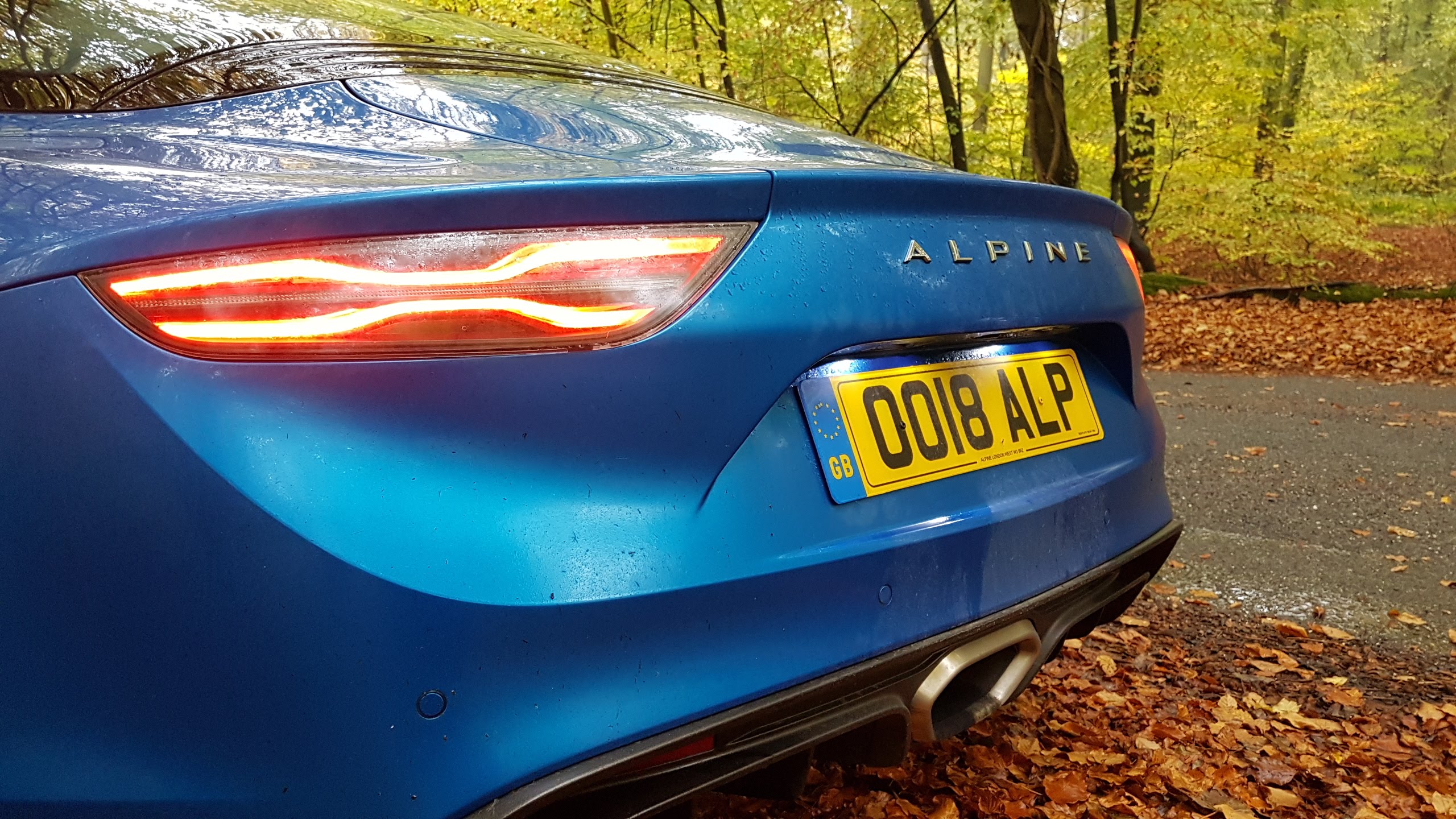 They haven’t quite judged this car to perfection… but they’re honestly not far off. Something a quarter-tonne lighter than the equivalent Porsche – and inevitably rarer, thus feeling more special – that is still usable on a daily basis if you want it to be, makes for a deeply enticing recipe… and when push comes to shove, the A110 delivers in the ways it must. It’s as manoeuvrable and smooth in the city (albeit with minimal rear visibility) as it is trustworthy and enthusiastic on a B-road.

Oh, and an underrated advantage of lightweight? In two days of spirited driving, followed by some motorway cruising and city congestion, it barely used 25 litres of fuel.

The world needs more light, characterful and engaging new cars like this… even if it also needs them to have better infotainment interfaces. 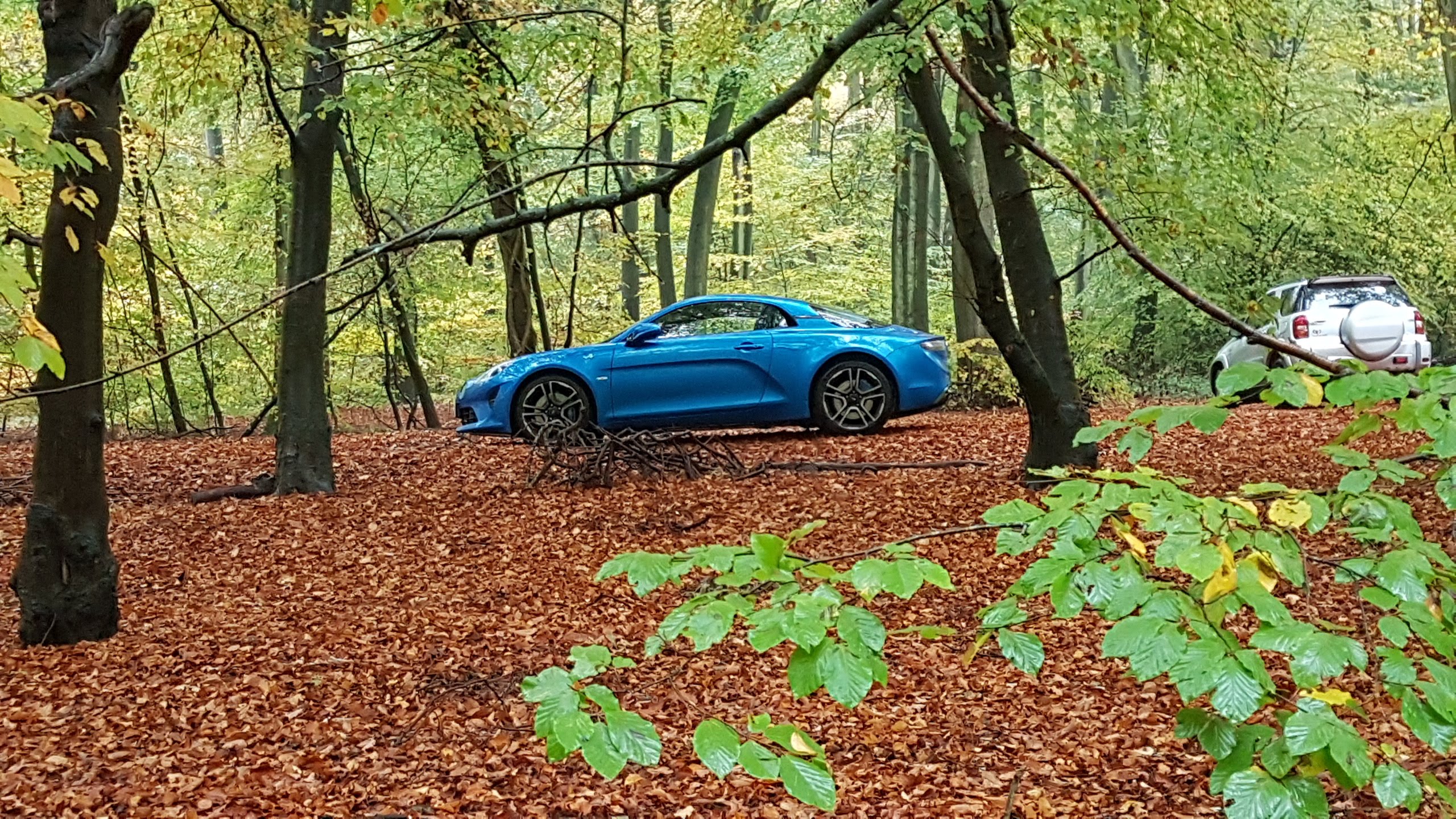 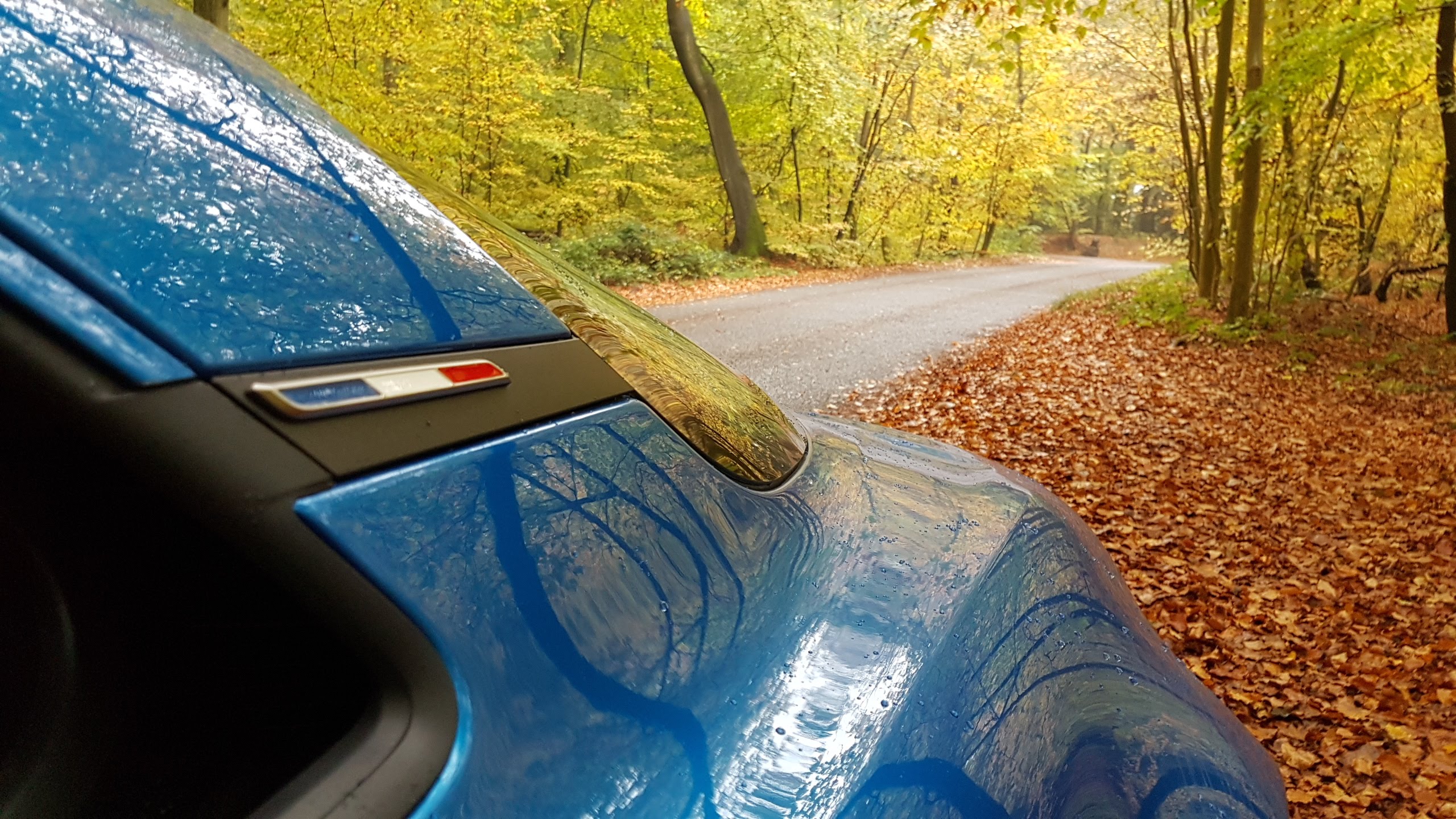