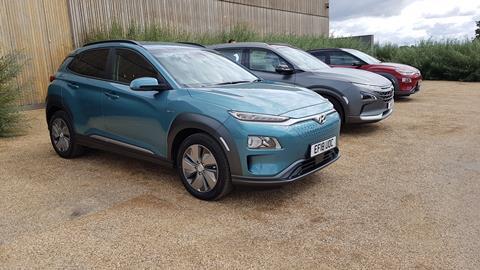 Charging about in a very convincing compact crossover EV, the Hyundai Kona Electric

Just about every major car company going has either added a small crossover to its range or is about to do so. On top of that, motor shows are increasingly filled with electric crossovers and SUVs that supposedly are exactly what every cool and happening car buyer (or leaser) is desperate to have on their driveway.

Hyundai is now offering a compact electric crossover of its own, a good few rungs down the financial ladder from the I-Paces, EQCs and Model Xs of the world. It brings all the appeal of such vehicles to a more everyday audience, starting as it does at £24,995 in the UK (after the government incentive discount). 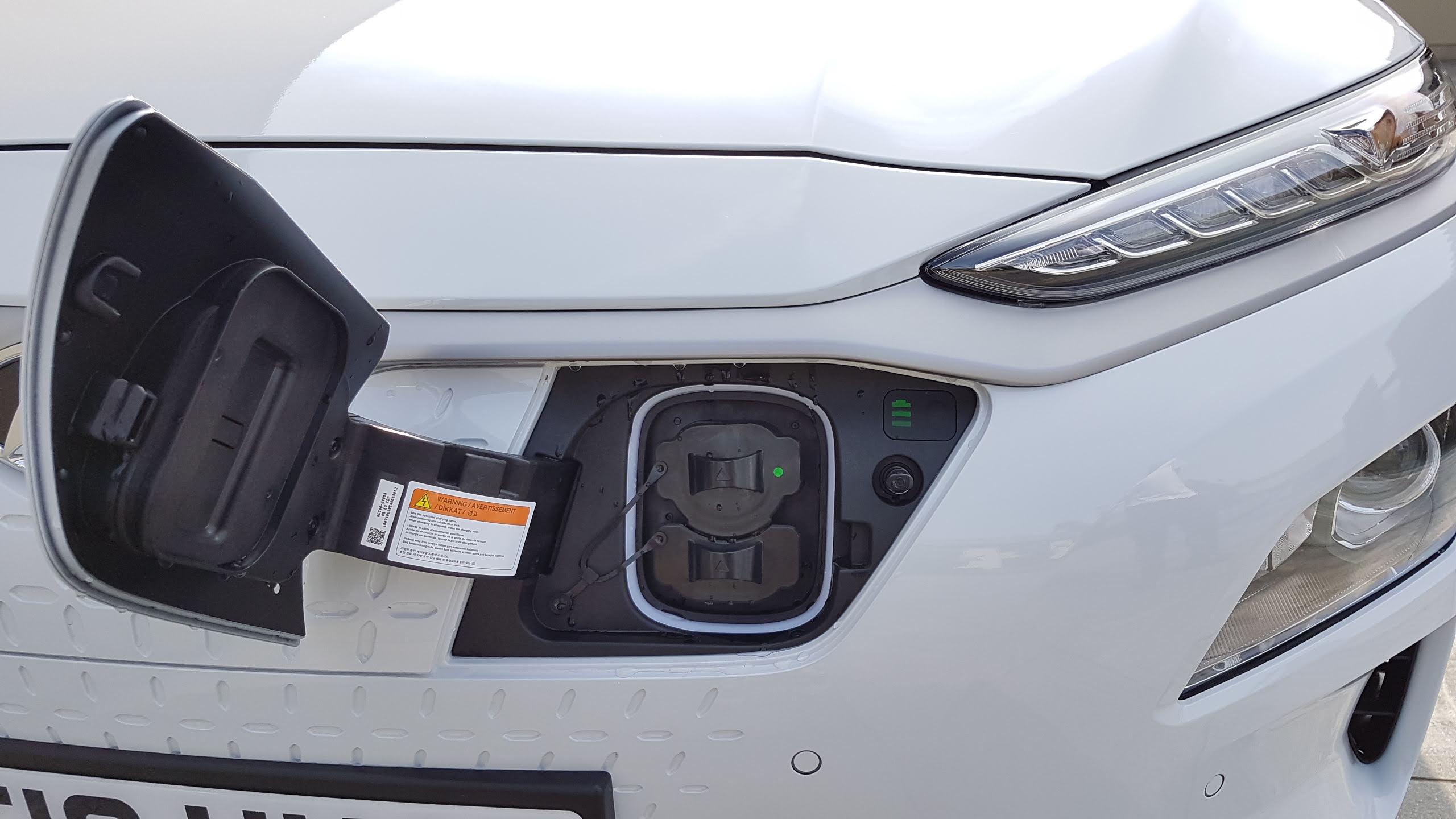 The Kona Electric may seem at a glance like a regular Kona crossover with its grilles blanked off and a battery/motor combo shoehorned in where the engine and gearbox used to be, but in fact the EV version was developed in parallel with the engine-powered version, with its own chassis architecture to facilitate a floor-mounted battery of either 39 or 64 kilowatt-hours.

The interior also takes advantage of the lack of transmission tunnel with a bespoke centre console – signifying clearly that this is not as simple as a penny-pinching derivative of a pre-existing car. 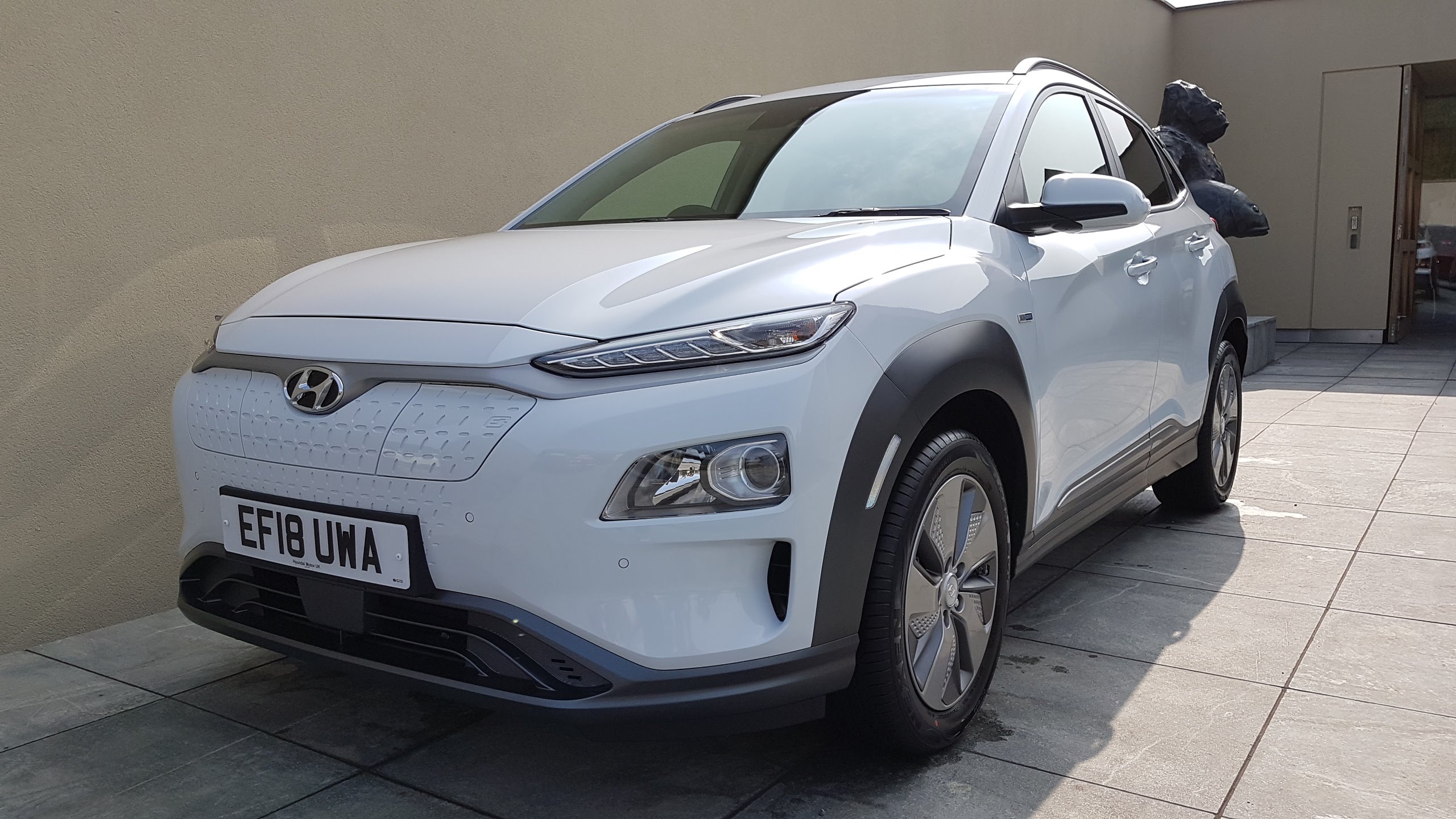 Having said that, the decision to base this crossover EV on a model equally designed (at least on the outside) for traditional engines means that the Kona struggles to look futuristic or Sci-Fi enough, compared to the more cab-forward Jaguar I-Pace and Tesla Model X – or the almost flat-nosed Porsche Taycan (née Mission E) – up in the premium sector on dedicated EV platforms.

On the flip side, that means people who are hesitant to switch to these alien new EVs will find this particular one familiar enough to consider it approachable. Well, it’s working for the Nissan Leaf…

The sheet metal of the Electric is interchangeable with that of the ‘normal’ Kona, an introduction to which you can read by clicking here (featuring Luc Donckerwolke, no less).

The bumpers, on the other hand, have been changed to give a smoother, cleaner feel. We are fine with this decision, as at the front, it has meant the removal of all the fake grilles above and alongside the main one, which has also been erased, as the lower grille can add enough cooling on its own. 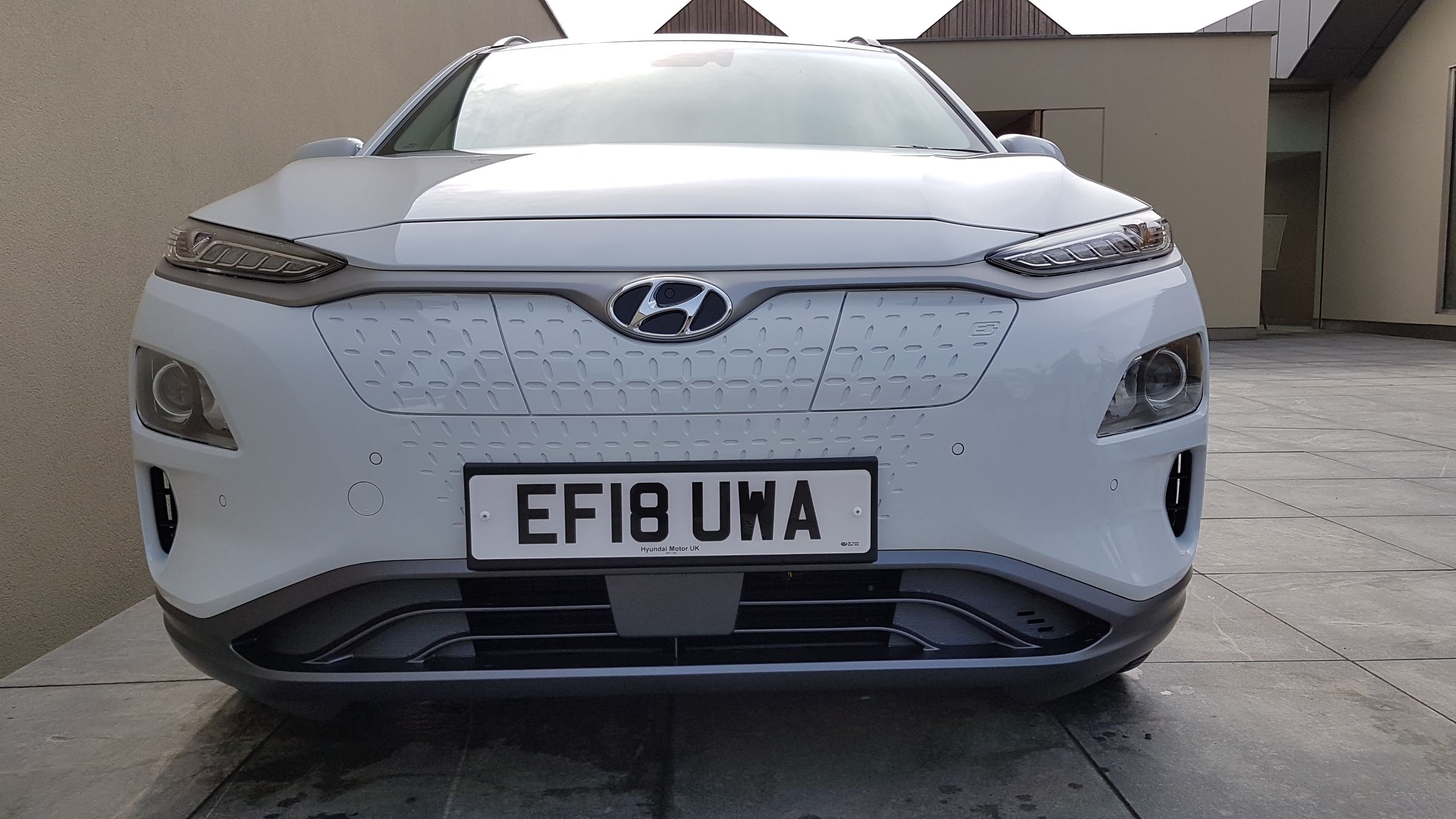 To stop it looking too plain, though, a dotted-line pattern adds some texturing as it reaches from the lower grille, to the silver-painted bridge linking the LED driving lights to the central ‘H’ badge. The panel on the driver’s left (with a plug icon on it – to the right of the pic above) hides the charging socket. The blanked-off symmetrical panel on the opposite side suggests that the whole assembly is flipped around for left-hand-drive markets.

Interestingly, the black plastic cladding that branched out of the wheelarch liner on its sister car to house the larger headlights sitting at mid-height, has also been taken away. This means that the front doesn’t match up with the rear end – which is unchanged in this regard – quite as coherently as on the non-electric version. An ‘air curtain’ sits beneath the headlights to guide the air smoothly through the front wheel arch. 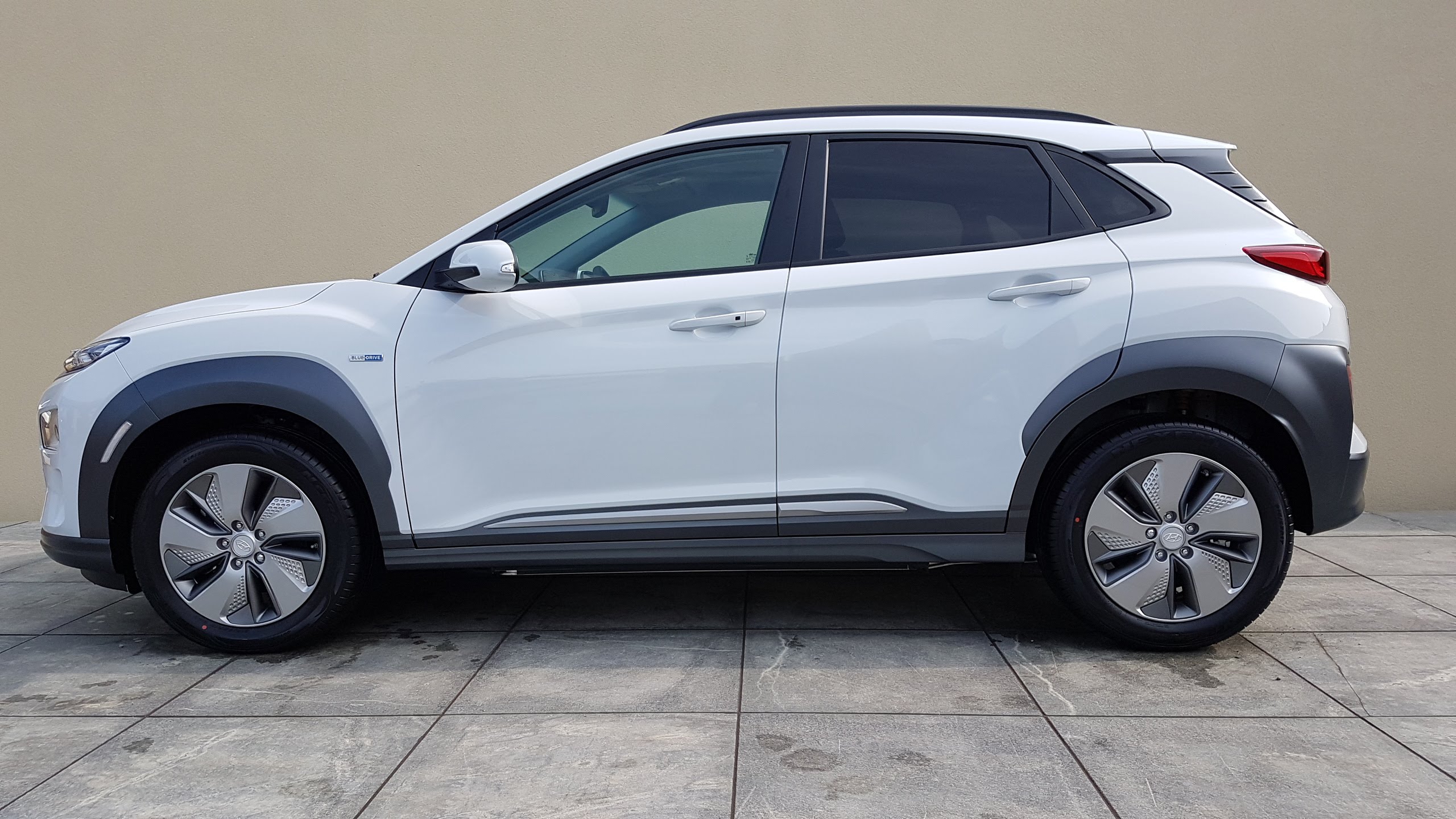 The bodyside design is unchanged from the conventional Kona, remaining relatively un-fussy with subtle haunches created by echoing the wheelarch cladding profile with a character line a few inches above it at each axle, while its slimline but chrome-trimmed light catcher initially runs parallel to the bone line below the DLO for a bit more visual rake.

The special low-drag 17-inch wheels are new though, flatter than they appear thanks to the grey inserts (and some ‘squircle’ texturing) which stop them looking like discs. The swept-back inserts are directional, but not reversed for the other side of the car, which is slightly annoying on a pedantic level. 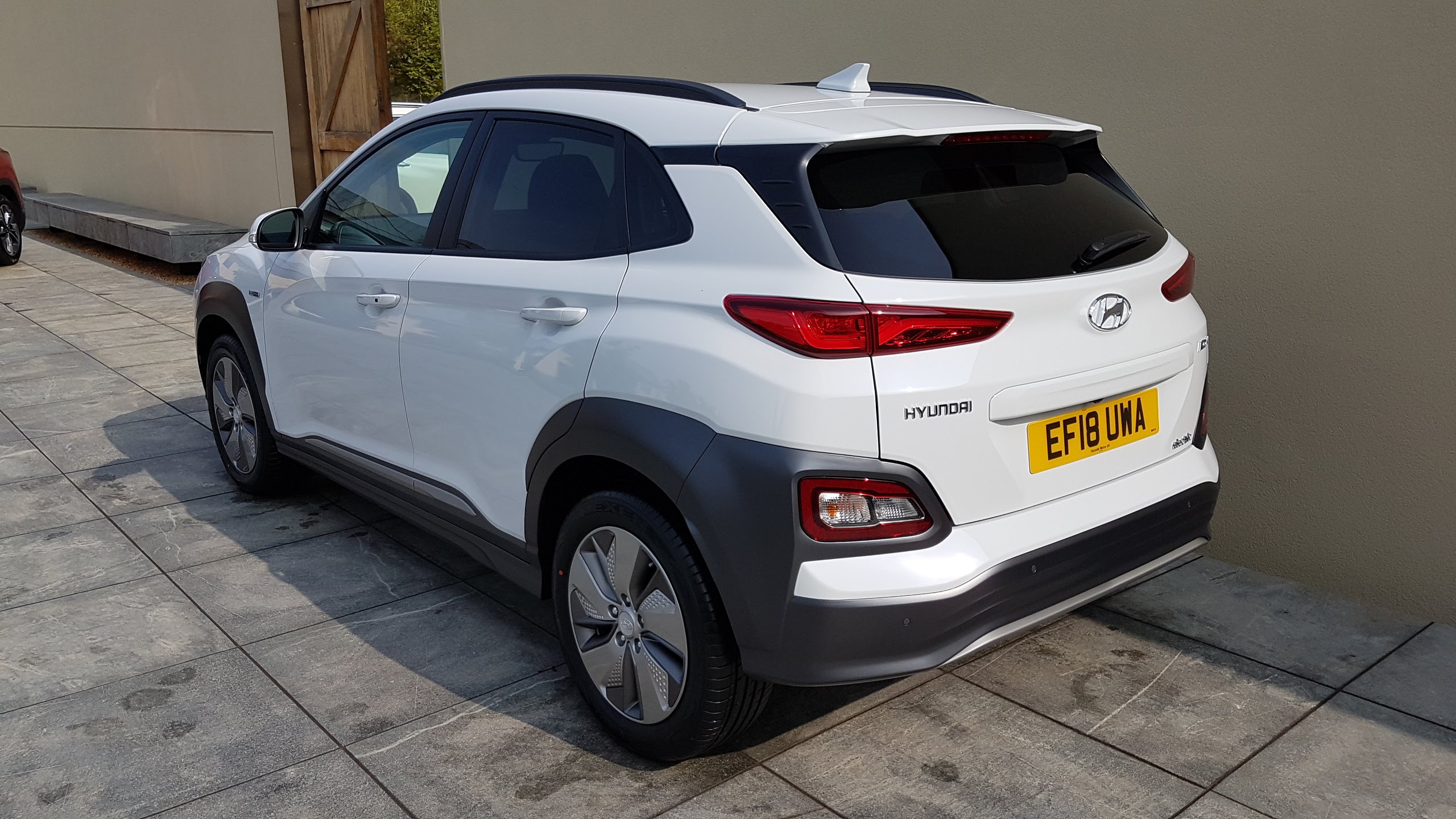 The rear bumper has a much smaller piece of silver trim at its bottom edge, the shape of which ripples through the black cladding in the absence of an exhaust pipe. The rest is unchanged. 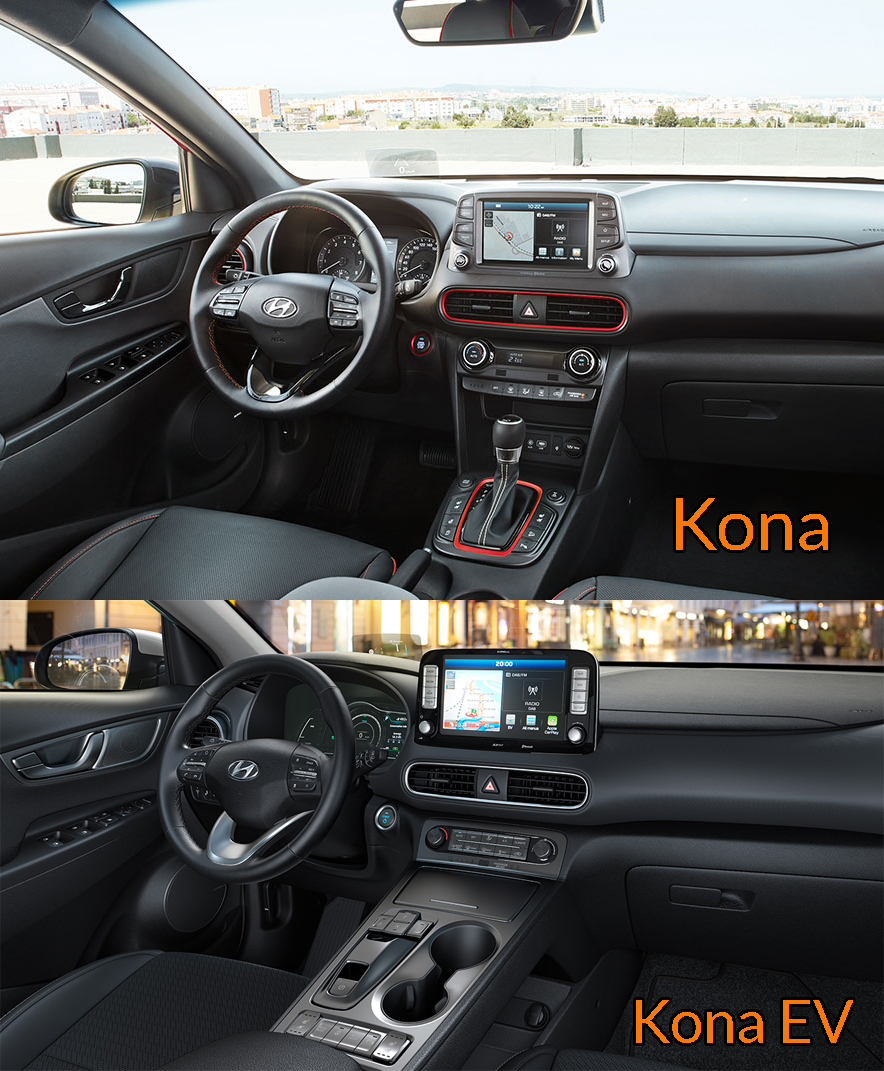 The electric Kona gets its own specific centre console. The main difference compared to the standard Kona is that the whole thing sits much higher, taking advantage of the lack of gear lever, to put things within easier reach and create a storage area below it, as it bridges the full gap between the central storage bin and the dashboard. 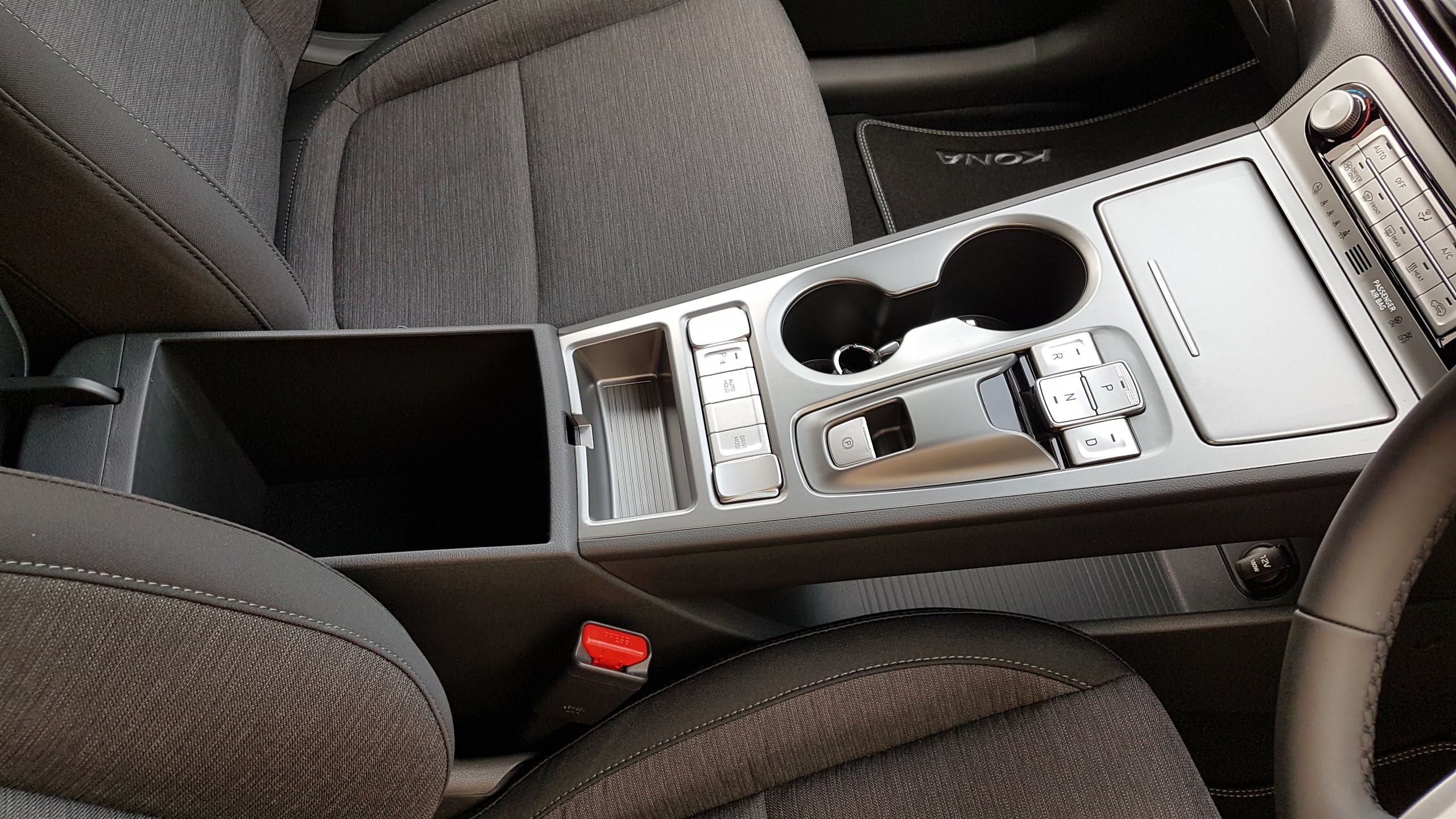 The design carries shades of NEXO in its greyness and its silvery buttons – and in fact, the transmission and parking brake cluster is the very same. There are, however, fewer buttons and knobs in here, in part to make space for two cupholders, plus a cubby to store (and wirelessly charge) your phone just ahead of the physical HVAC controls. 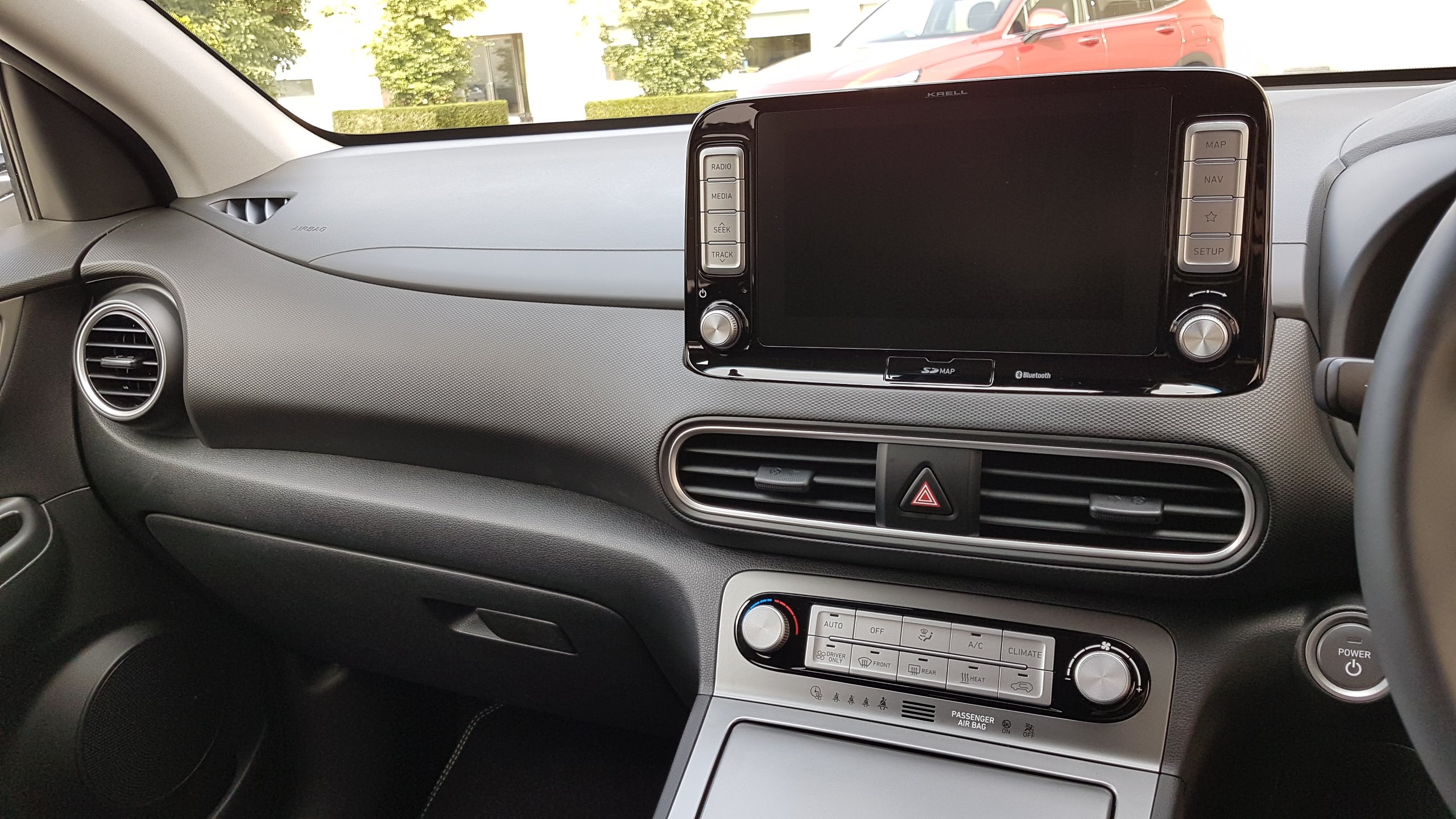 This in turn means that more functions need to be accessed via the eight-inch infotainment screen. It doesn’t look or feel as up-to-date as the NEXO’s (because it isn’t), its glossy black plastic protruding out of the conventional dash – but in fairness the Kona Electric is half the price overall.

The two physical knobs in the lower corners make it look like a digital Etch-a-Sketch, with additional silver buttons above for accessing specific functions of the media player (on the left) and satellite navigation (on the right). 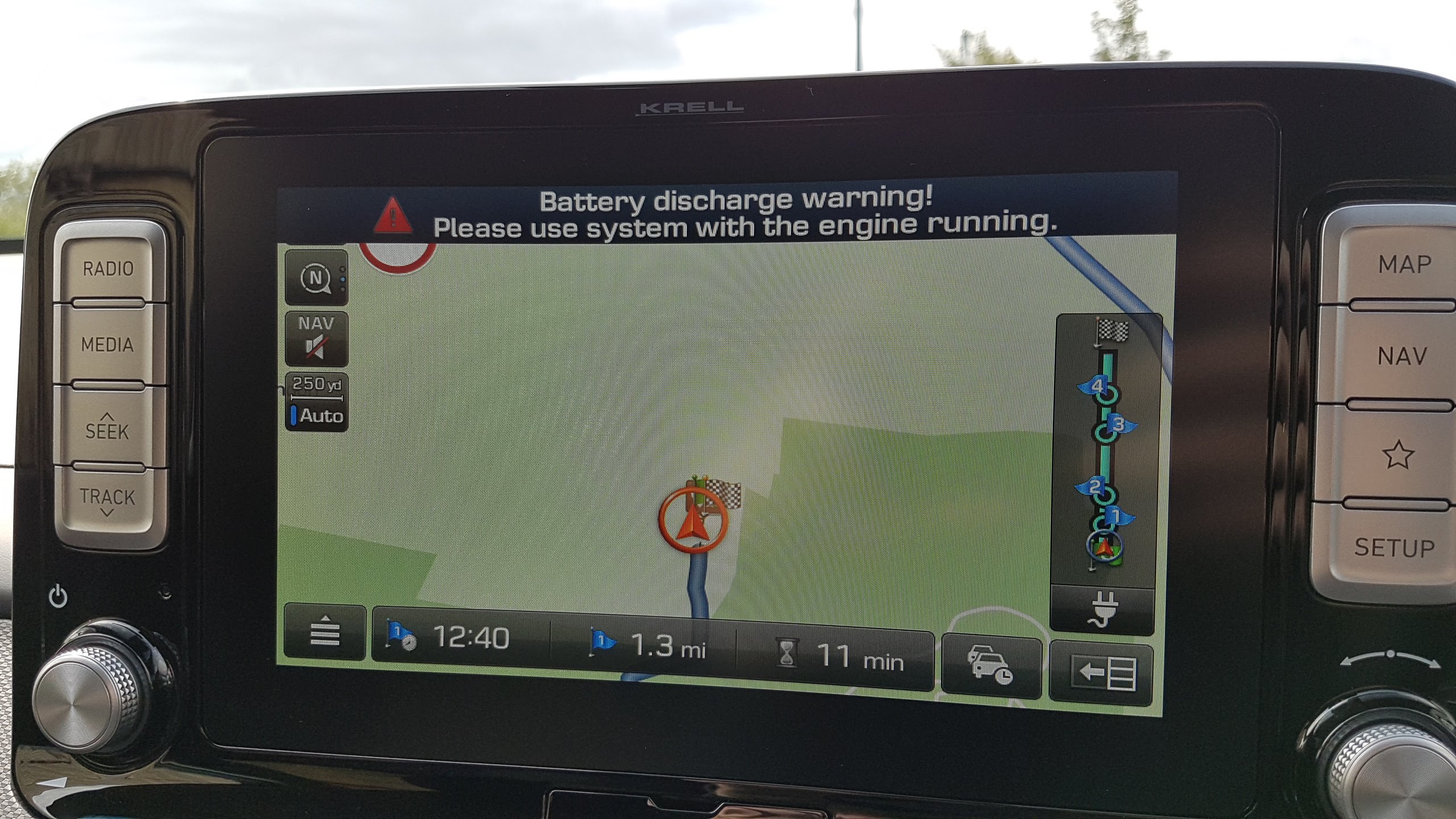 As the screen demands that you reach out and poke it – unlike the NEXO with its elbow-height controller on the centre console – it’s important to point out that, cheap though the plastic ‘body’ may look, the screen’s internal structure is solid enough that this fixed tablet never wobbled during usage while driving. Which is reassuring. 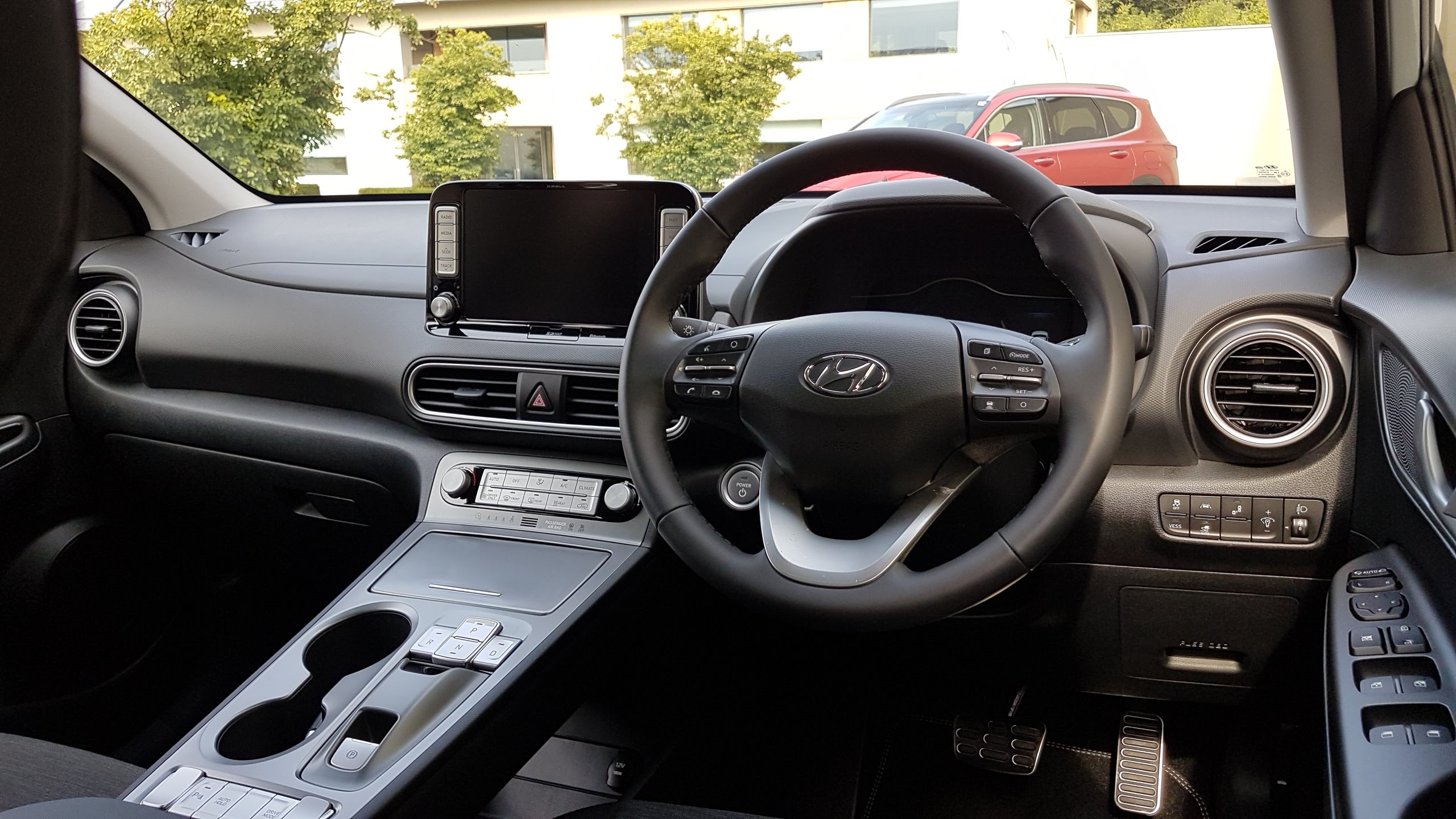 Overall, it’s a more logical cabin than their new fuel cell car, and slightly more upmarket than the conventional Kona – justifying the premium. 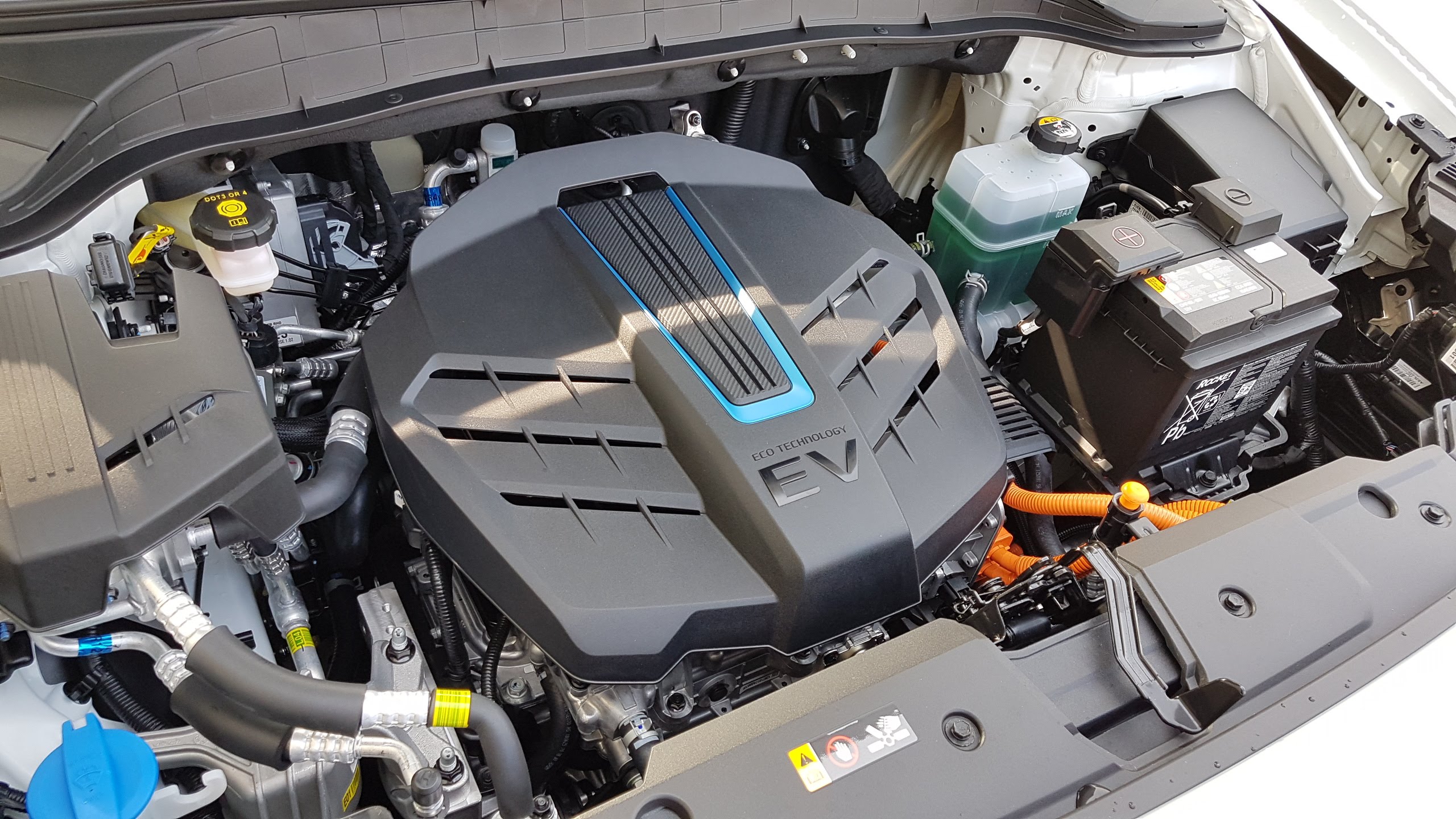 We tested the 39kWh version with its comparatively modest 100kW (134bhp) motor. Hyundai claims a maximum range of 194 miles for this version, while the 64kWh version with its 150kW (201bhp) motor can allegedly stretch all the way out to 300 miles – making the Kona, not the Tesla Model 3, the first mass-market long-range electric vehicle in the UK.

Both versions are front-wheel-drive to keep things simple, with the power control unit sat atop the motor to fill the ‘engine bay’. 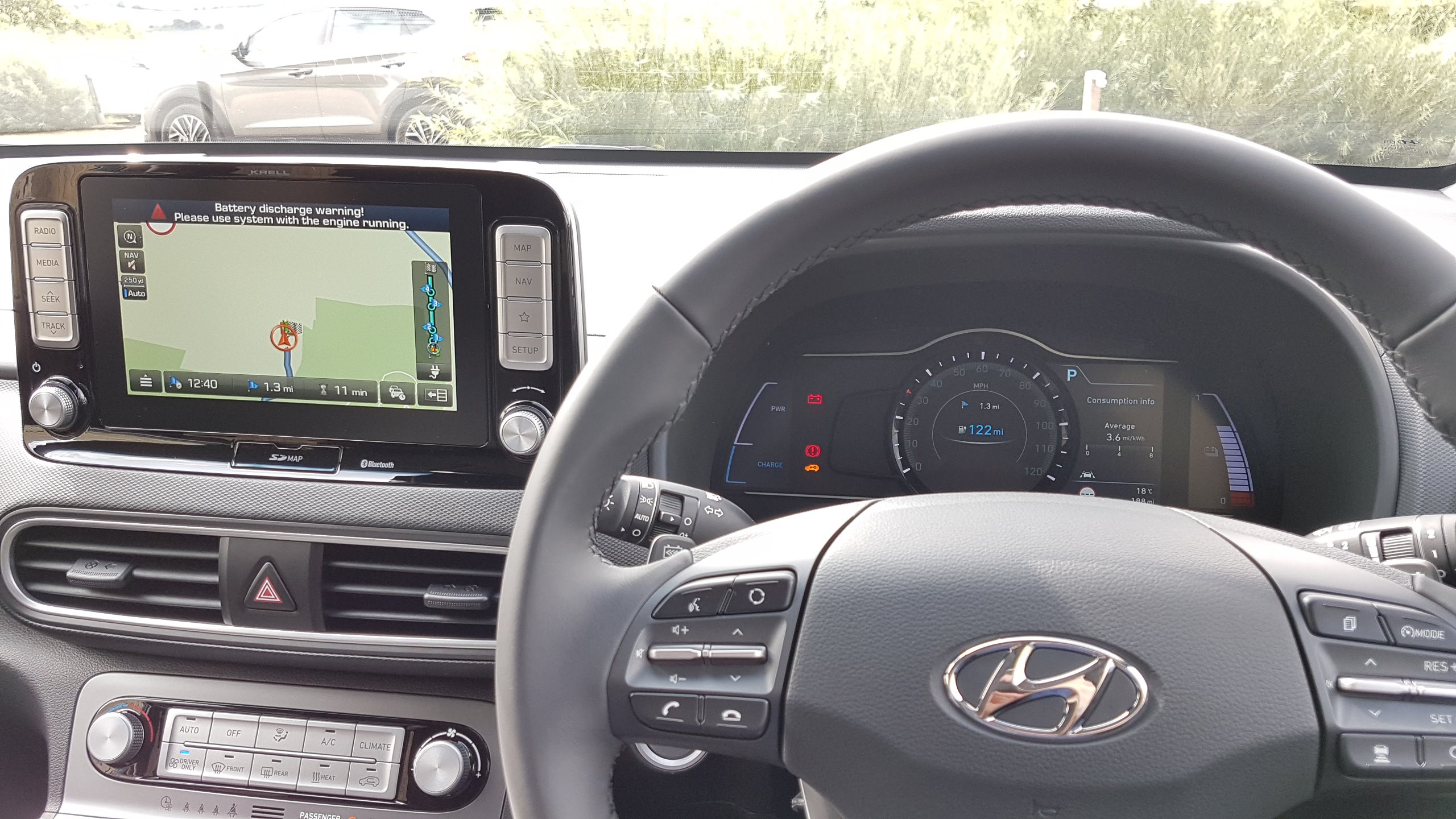 The digital IP shows you how demanding you’re being on the throttle, as well as how much it’s recharging when you lift and coast, in the graphic bar on its left. A gloss black plastic insert breaks up the expanse of screen and, together with raised silver outlines, creates a mix of analogue and digital that befits an electric version of a conventional car.

The central ‘dial’ has three different graphic designs, depending on the selected drive mode, with Comfort giving a simulation of an analogue speedometer dial where Eco and Sport instead focus on realtime power usage. 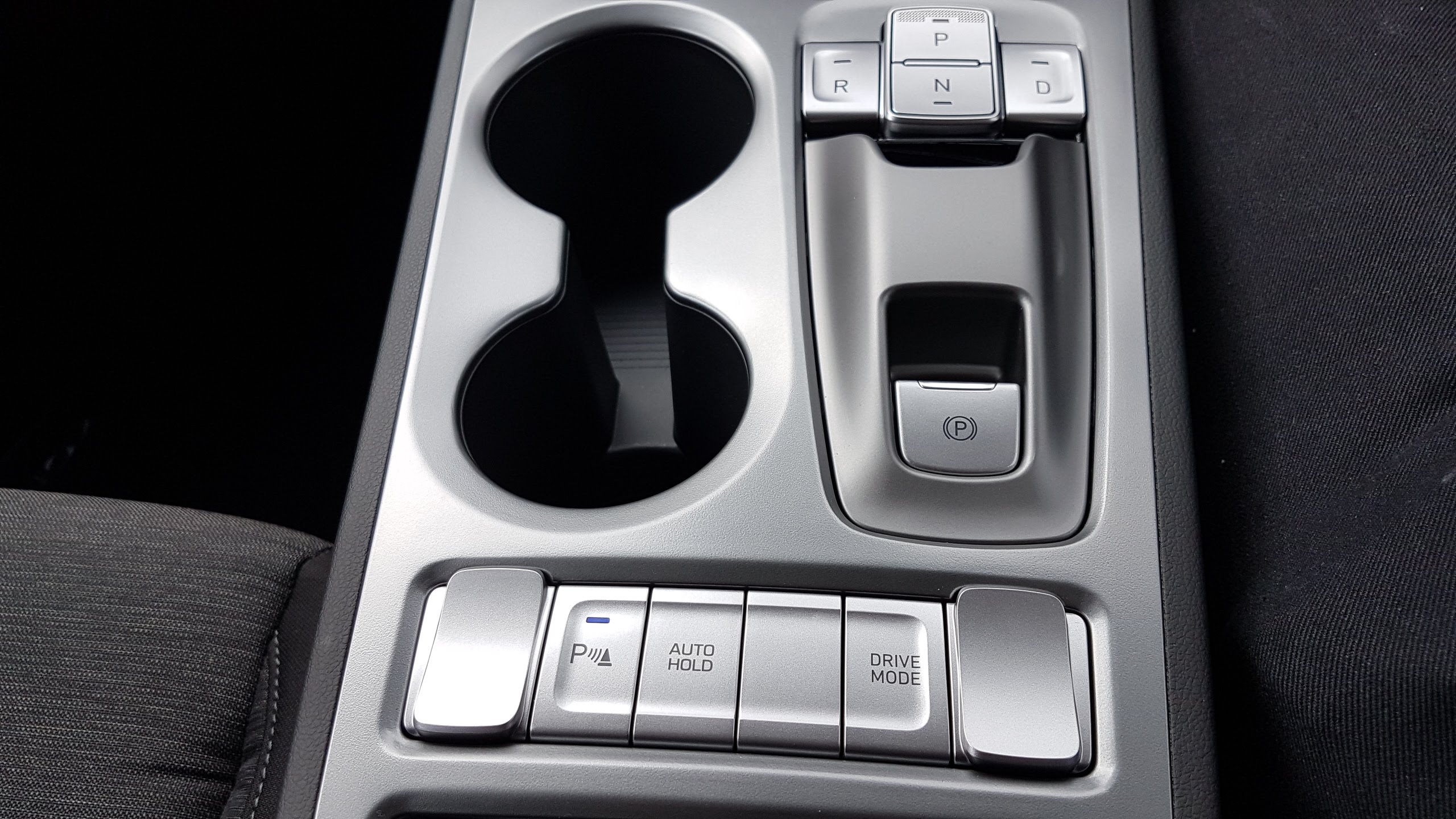 The main appeal of these crossovers – which are inherently heavier (meaning slower), less aerodynamic, worse on fuel, worse in the corners with a higher centre-of-gravity, and more expensive than equivalent hatchbacks – is supposed to be the high driving position which gives a ‘commanding’ view of the road. However, we didn’t really notice any benefit during our drive, but then we were out in the countryside, rather than an urban area where it might matter more for manoeuvring. Either it isn’t as noticeable on country lanes, or the Kona doesn’t actually sit you much higher than is usual.

What is noticeable, however, is the effect of switching between Eco, Comfort and Sport modes, using a button under the driver’s elbow which should really be within easier reach – perhaps on the steering wheel, like the i30 N. 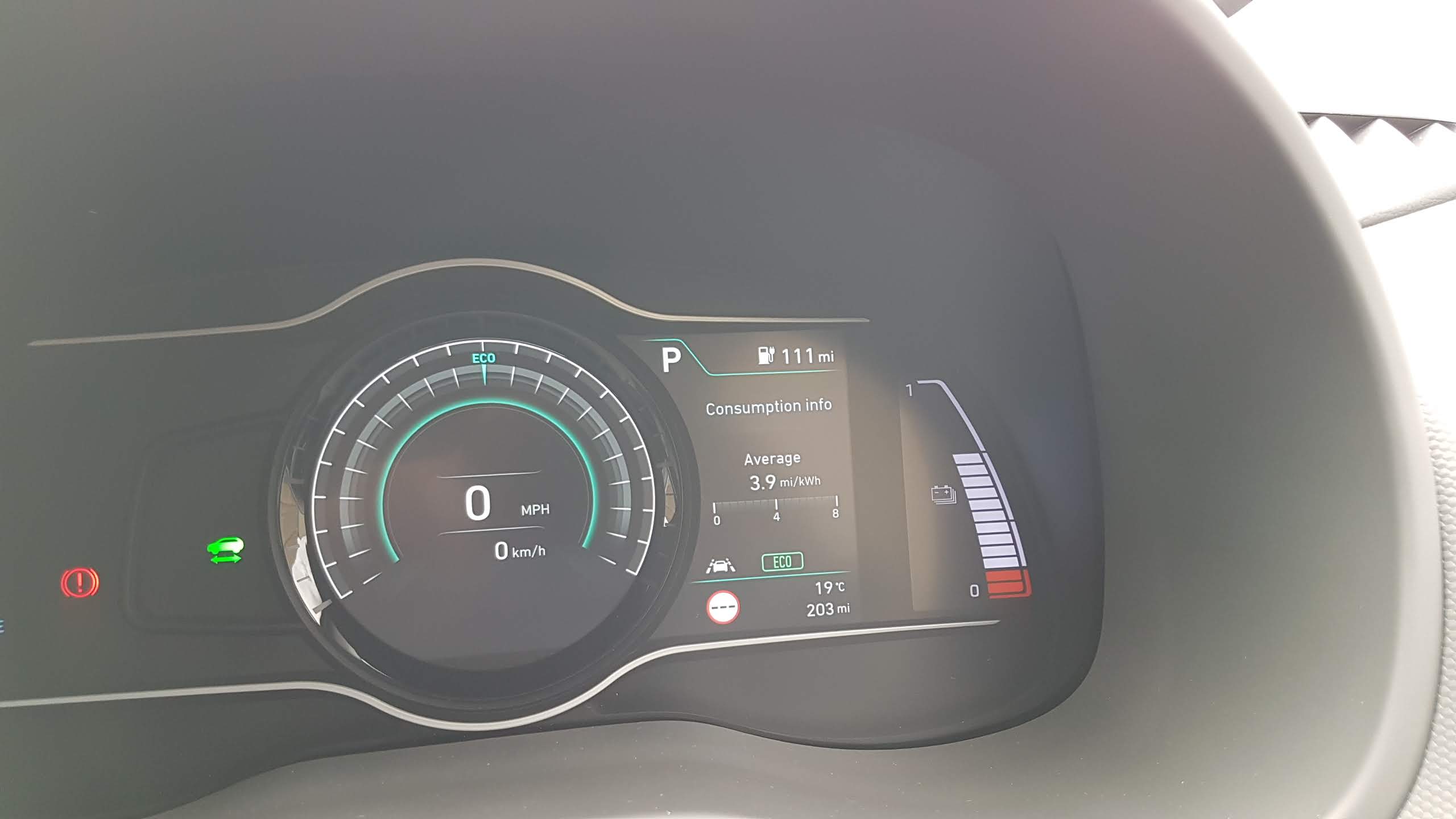 Eco is the default, sensibly, wherein the initial throttle response is calm and gradual, to sip electricity, and the braking effect caused by energy regeneration is ever-present. In the strongest setting, that adjustable regeneration is strong enough to feel like a decent press of the physical brake pedal – ideal for roads where the limit drops from 60 to 30 for villages, or for descending steep hills. 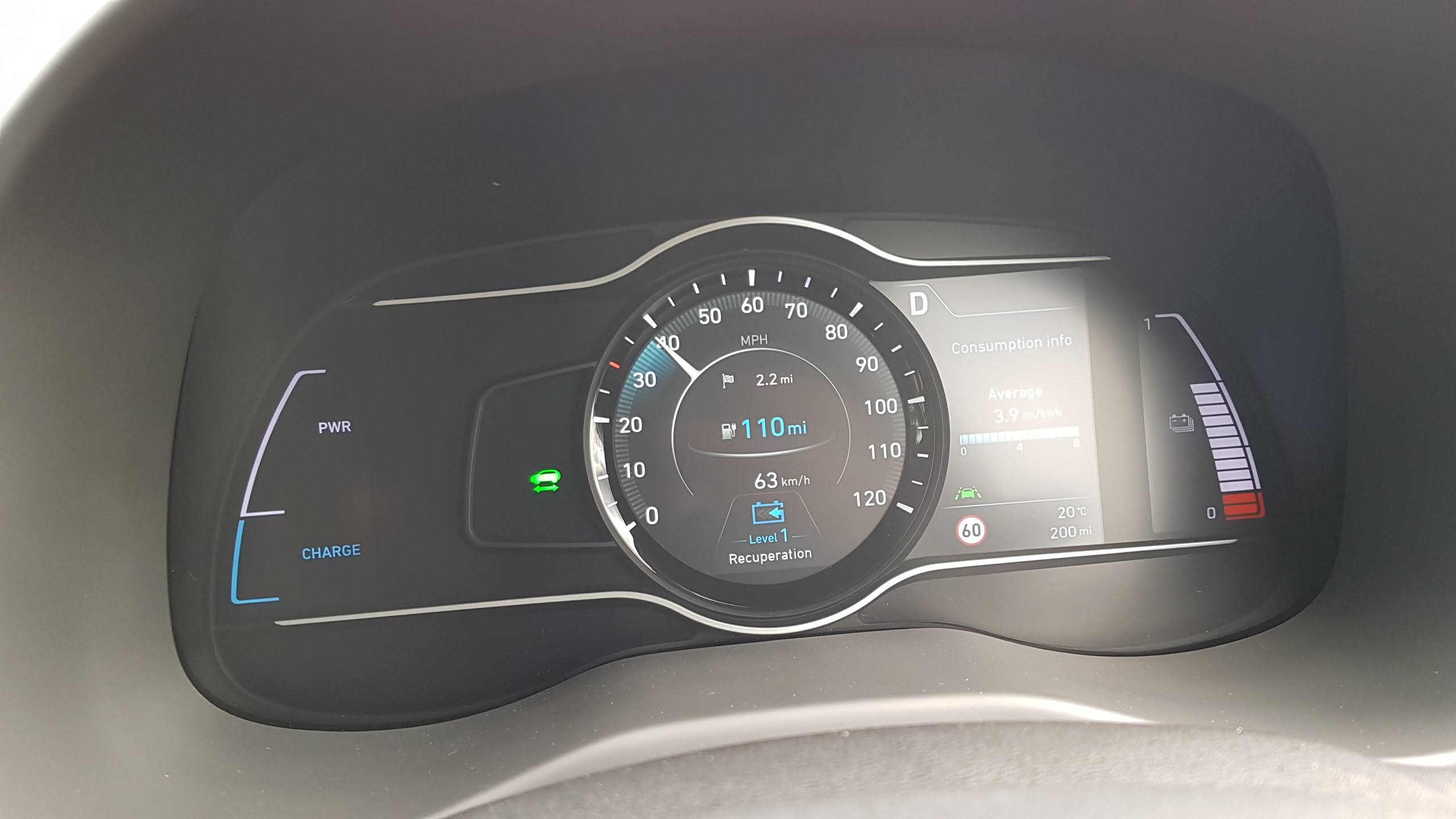 Selecting Comfort (which apparently is the new Normal) instantly gives a sense of power being ‘freed up’ as the car feels less like it’s being held back by regen’, even though that’s still happening. Acceleration is sharper too. The measurement lines around the edge of the speedo only light up in this mode, as the numbers shown in Eco and Sport don’t relate to MPH – something which took a bit of getting used to. 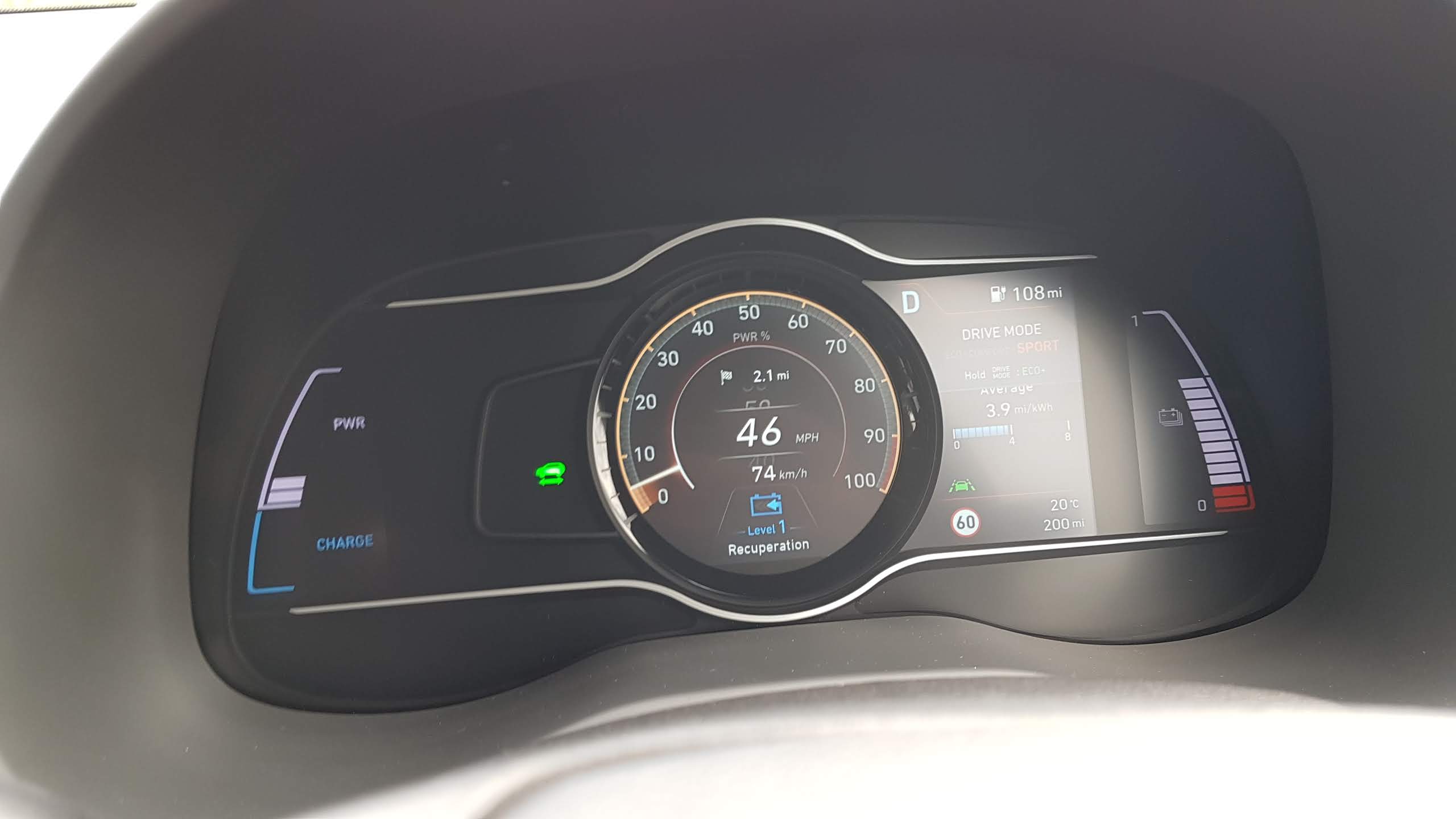 Sport mode makes the throttle response… entertaining. Heavy throttle at low speed overwhelms the front tyres fairly easily with 291lb/ft of instant torque, until they bite back and launch you forwards with a satisfying surge… for a couple of seconds, at least. The ring of numbers is no longer telling you speed in this mode, but instead how much power you’re using, as a percentage. 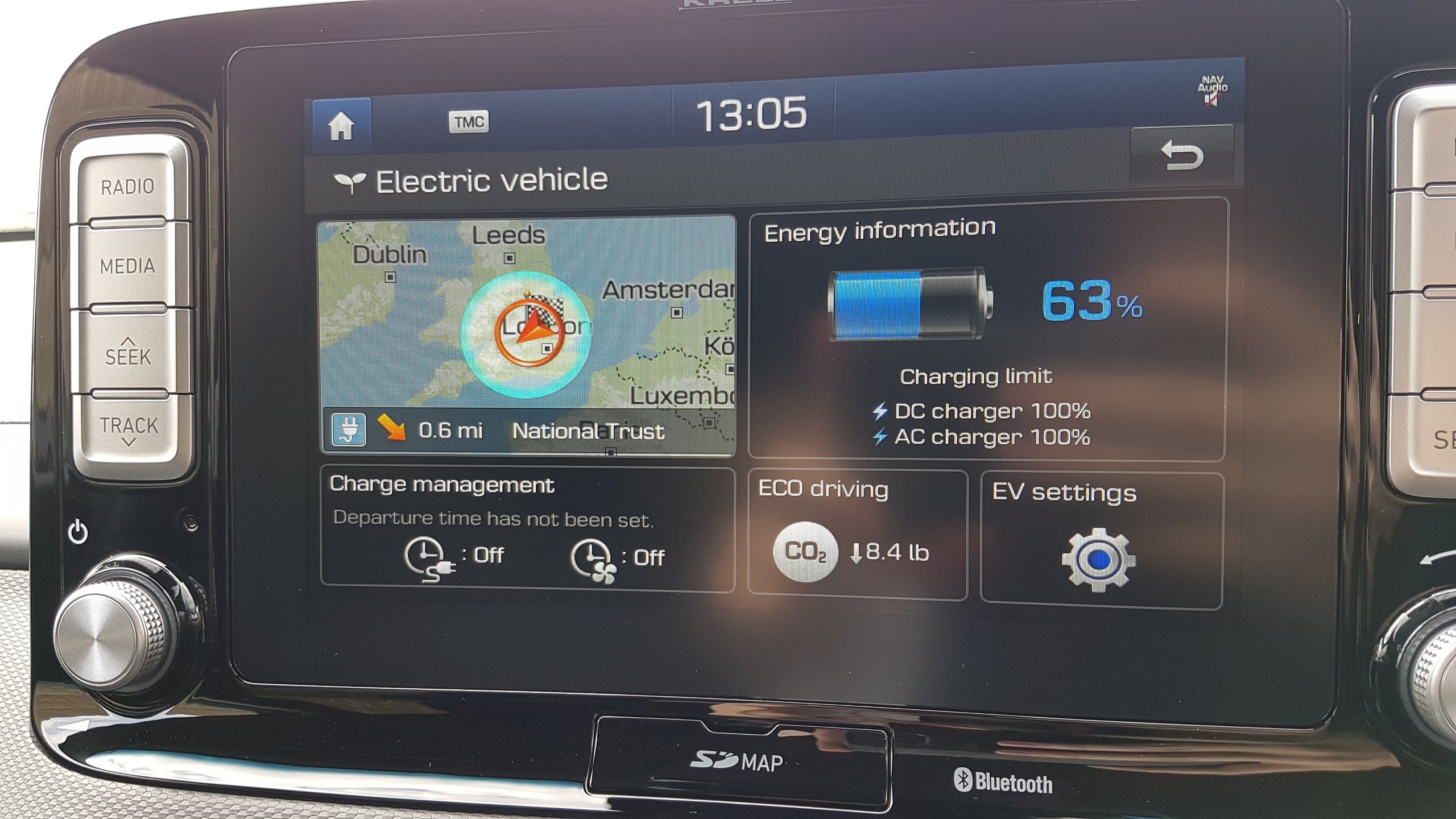 The responsive dash screen has a UI design akin to a smartphone OS, with fingertip-sized icons to access menus. The EV-specific section holds information about the current journey, including a map of the nearest charging stations; battery level, approximate remaining range and a smug little box telling you how much CO2 you’ve saved.

The infotainment functions are best left to passengers when on the move, although the wheel-mounted controls for audio and cruise control feel good and work well. 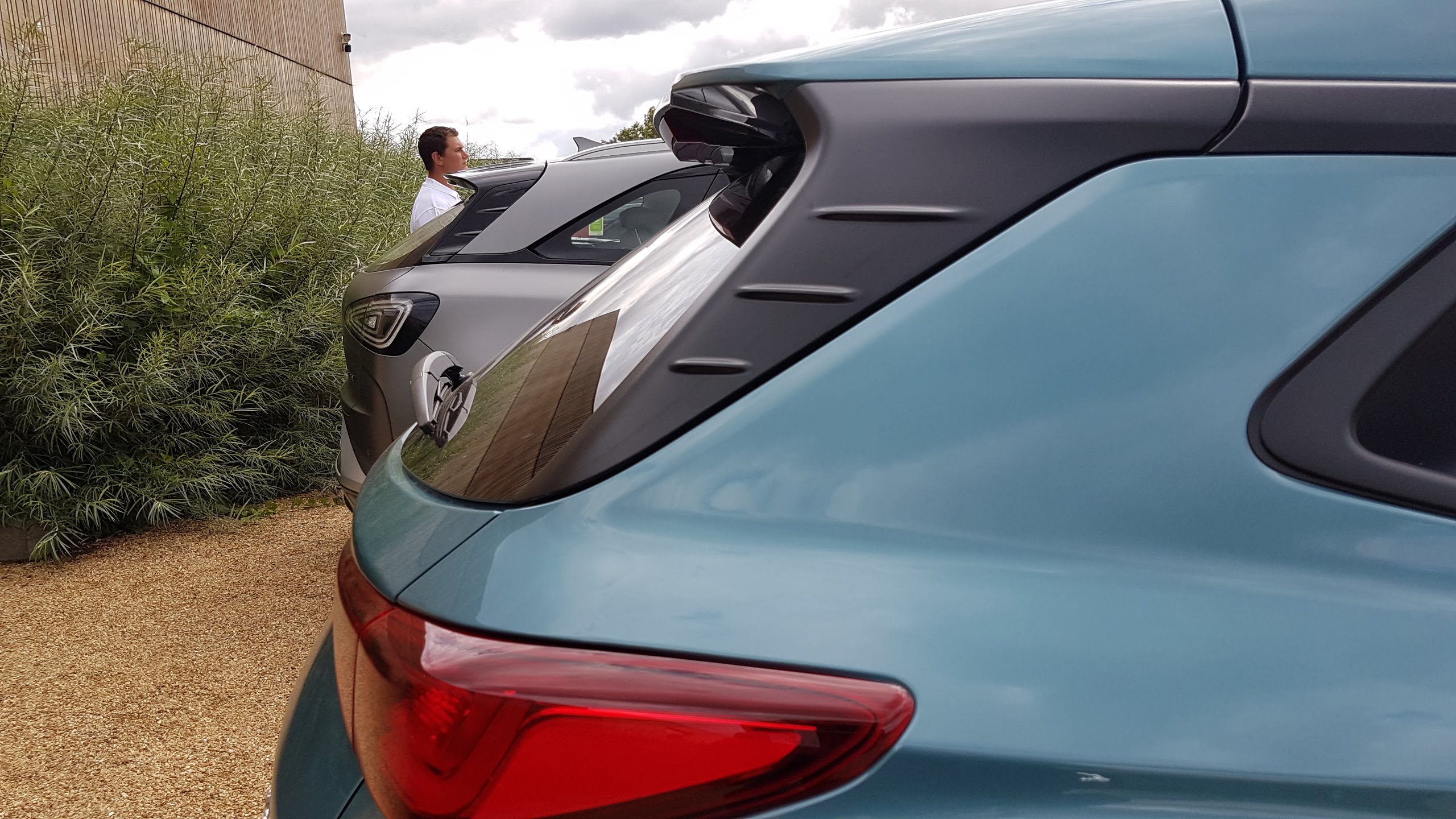 The Kona Electric makes for a thoroughly convincing EV overall, one that is fundamentally easy to understand – from a design, a UX and a driving point of view – plus a nice place to spend time in. Its added quietness and smoothness in comparison to a traditionally-powered car of this size also makes it a more relaxing proposition in day-to-day driving.

All in all, it’s an electric vehicle that the average person could quite comfortably justify as their only vehicle. Given the combination of relatable on-trend looks, a clean and logical interior (variable IP layout notwithstanding), the range on offer in the big-battery version, and its lack of major flaws, perhaps they should.