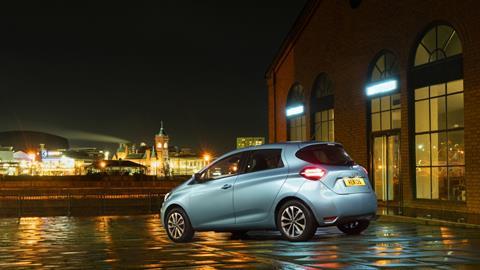 Nimble, comfortable and light on the environment, the Renault Zoe is an adept city companion. If only London’s EV infrastructure was equally as good, says Michael Nash

Electric vehicles are always marketed by carmakers as the perfect urban companion. With zero local carbon emissions, and the fact that city authorities around the world are intent on discouraging entry of older combustion-powered vehicles (particularly diesels), EVs make more sense than ever for city driving.

The Renault Zoe is currently Europe’s best selling EV, beating the likes of the Tesla Model 3 and the Nissan Leaf. Renault describes the Zoe as ”La citadine qui électrise votre quotidien”, which translates to ”The city dweller that electrifies your daily life.”

But is the design of the EV suited for busy urban environments and daily commutes in slow-moving traffic? We spent a week in the Zoe to find out.

The Zoe’s shape is very close to the latest generation Clio (which is shares a platform with), but the edges are softer and body work is curvier. The front of the Zoe is more forgiving, with the headlamps and ‘grille’ area sitting back into the bonnet, and a big Renault badge in the centre hiding the charge port. The fog lights and surrounding air vents are the same as those on the Clio. 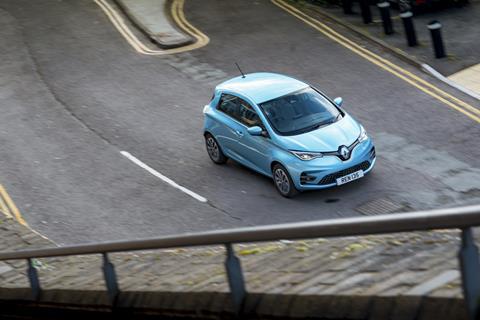 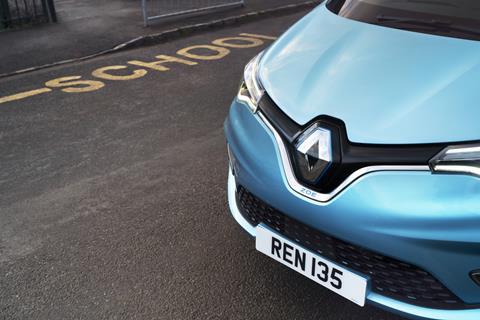 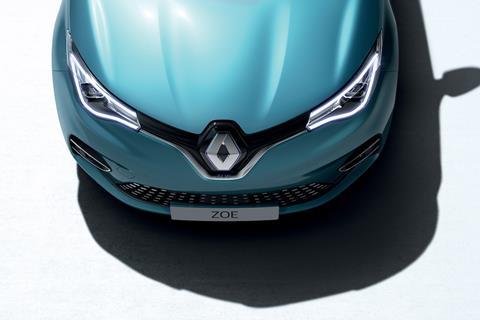 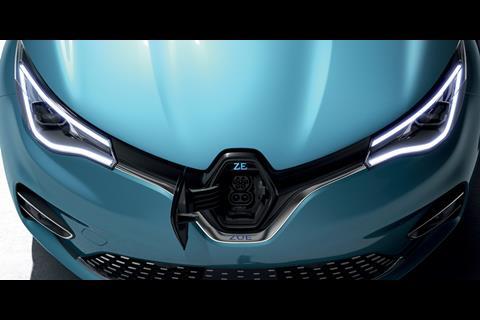 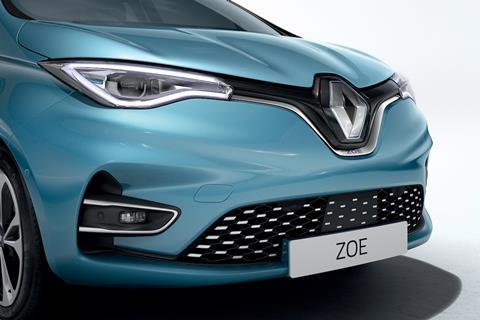 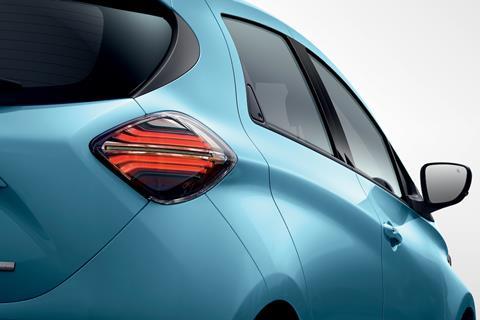 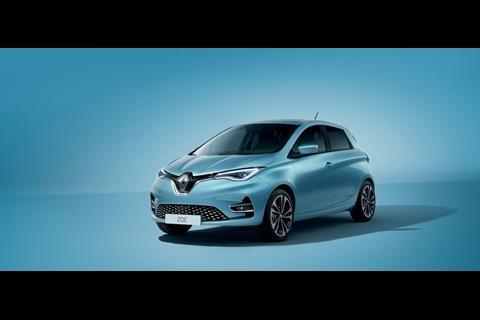 A lack of skirts allows the body work to run without interruption on the side. Two clear lines meet in the middle, the first running from the top of the headlamps and below the front window, the other starting in the middle of the rear lamp and finishing at the front door handle.

The rear is tucked in, pushing the roof up to make the Zoe look taller and slimmer than the Clio. Curvy body work to the wide lower section of the back end makes for a unique feel, though it is somewhat similar to Fiat 500. The rear lamps are diamond-shaped, and a slight crease in the body work emphasises their position.

Renault decided to make considerable changes to the inside of the new Zoe, and it feels much fresher and more modern than the previous generation. This is primarily down to the quality of materials used throughout, which are far nicer to touch and more aesthically pleasing.

The central 10-inch touchscreen is larger and no longer sits inside a chunky, cheap plastic case. Instead it is thin and square, and is placed upright on the dash above three climate control dials. The previous generation Zoe had one large and one small dial with several switches in between, making it look busy and dated. 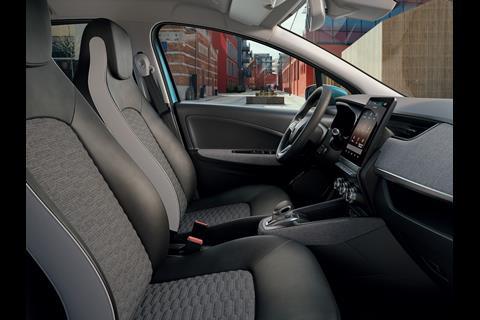 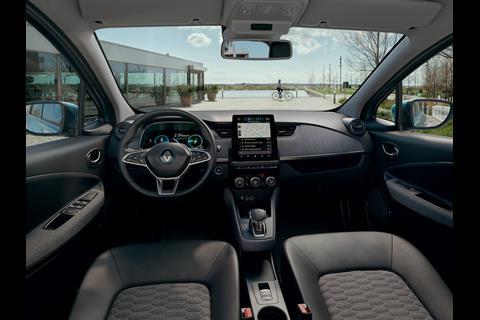 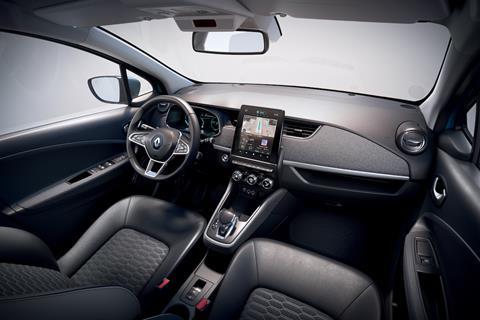 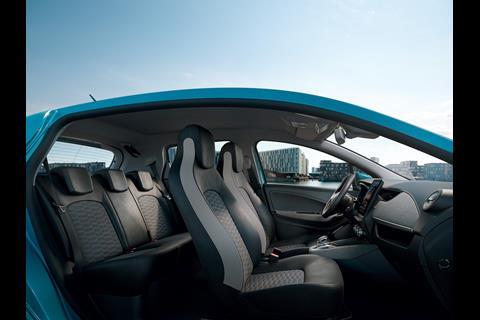 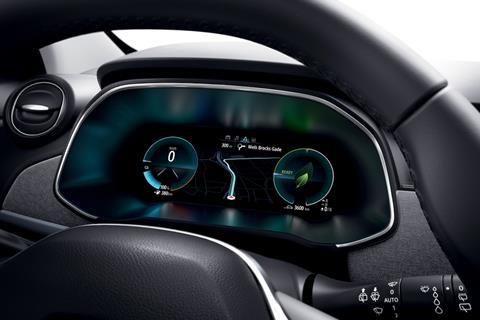 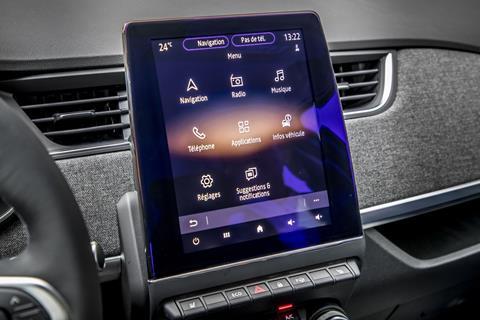 The rounded shape of the dash is similar to the one in the old Zoe, but this time the middle section is finished with fabric that continues on the centre console. There is a strip chrome underlining the fabric, acting as a break between it and the hard plastic beneath.

The upholstery is made from recycled carded yarn and produced using a manufacturing process that negates the need for chemical transformation, cutting related CO2 emissions by over 60%.

The latest Zoe has more power and range thanks to an updated 52kWh battery and a new motor. As a result, Renault says that the new model will do 245 miles on a cycle full charge, up from the 190 miles of the previous Zoe and slightly over the Nissan Leaf’s 235 mile range. This will last over a week for short inner-city commutes. It also has 135hp more than the first generation Zoe, with 0-100kph taking just 7.1 seconds.

Both a type-2 socket for AC charging and a two-pin input for DC charging are housed under the Renault badge at the front, maximising the amount of stations available to the driver. It is particularly useful when one charge station is down, which is very common in the centre of the city. 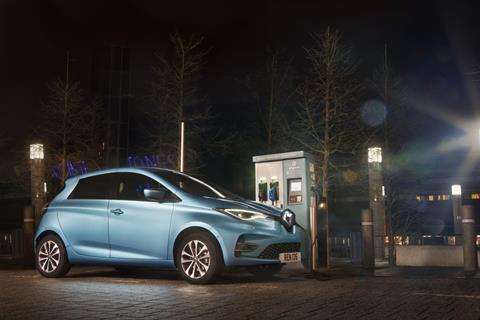 One of the perennial issues with EVs is that, without a combustion engine, noises that would otherwise be drowned out are audible. The silence of the Zoe’s electric power is refreshing, but in busy traffic, engines from other cars and loud motorbikes become extremely clear. The artificial whir produced by the Zoe to warn pedestrians is also obvious when braking and accelerating. Wind and tyre noise, however, are kept fairly minimal thanks to additional acoustic treatment to the cabin and a re-engineered suspension.

As well as helping to cut noise in the cabin, the new suspension makes the Zoe slightly smoother on rough city roads that are long overdue a resurface. However, big potholes will still have a significant and noticeable impact. This again is due to the lack of background noise in the cabin, rather than the performance of the car itself.

The Zoe has the same wheelbase and width as the Clio, but has longer overhangs and is 100mm taller in order to house the battery pack beneath the back seats. Nevertheless, it still feels compact when sat behind the wheel, and is small enough to make city parking simple enough. The tight turning circle also helps, coming in at 10.6m compared to 11m for the Nissan Leaf. There is also a suit of cameras and sensors to guide the driver, and systems include hands-free parking as well as automatic emergency braking. 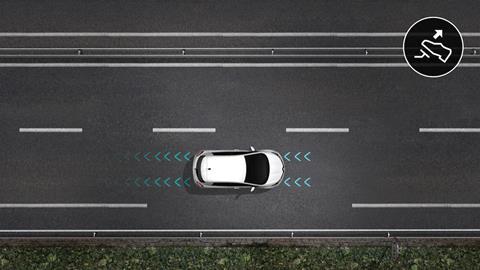 Graphic of the Renault Zoe in ‘B-mode’

A simple push of the ‘e-shifter’ gearbox allows the driver to change from the standard ‘D-mode’ to a new addition – ‘B-mode’. With acute decceleration applied when feet are off the pedals, ‘B-mode’ has been specially designed to reduce the need for the driver to step on the brake. It is particularly useful in stop-start city traffic.

Renault did extensive customer research before releasing the new Zoe, and as a result, came up with a new on-board system called ‘Easy Link’. It can be connected to the ’MY Renault’ app on a smartphone, which allows users to plan trips before entering the vehicle and take into account aspects such as charge points for the route. It has all been designed to make the Zoe more functional and to enhance the user experience, and while longer trips out of the city will still require planning, the integration of Renault’s Easy Link system does make it easier than ever.

A week driving around the city in the Renault Zoe did bring up some issues. Pulling up at a charging station only to find out that it is not working happened on numerous occasions, and the rules of parking in certain areas without risking a ticket were unclear. However, these are not issues related to the car itself, but the infrastructure and the wider legislation related to EVs.

The Zoe itself is proof that carmakers can design an electric car for the city. Its size, functionality and performance were more than suited to a twice-daily commute of around ten miles, and the interior provided a comfortable and calming space to sit in while in rush hour traffic. It may not turn many heads or win many beauty awards, but the Zoe’s design clearly makes it a firm option for those in need of a city runaround.