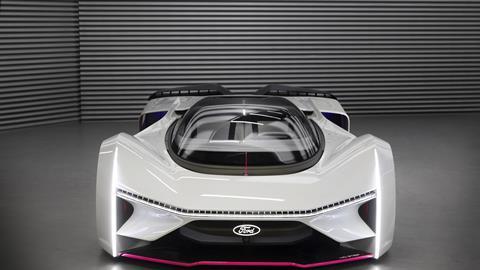 Team Fordzilla has unveiled its P1 virtual race car. Although it was made for gaming, the company has also produced a full-scale physical model in the real world.

The car features a lightweight monocoque structure with a jet fighter-style glass dome at its centre covering the cockpit. Inside, LED notification units keep the driver and co-pilot informed on track status, and a small screen on the steering wheel enables live data exchange between the car and the team in the pit.

Dramatic body work emphasises the aerodynamic properties of the P1 – the sculpted front end and extremely angular sides funnel air behind the wheels, and the risen front fenders allow air to slide over the top before hitting the enormous rear spoiler. Most dramatic of all is the exposed back end. Everything is visible, giving the P1 a sense of rawness and showcasing its power.

There is a clear continuity in the design work achieved through the lighting signature. At the front end, two vertical LED strips are positioned at the very edges of the car, running along the body work that covers the wheels. And at the back, a single vertical LED strip dissects the centre of the car, starting beneath the Ford badge where the two sides of the spoiler meet and finishing between the minimalist rear bumper. It is simple, but very effective. 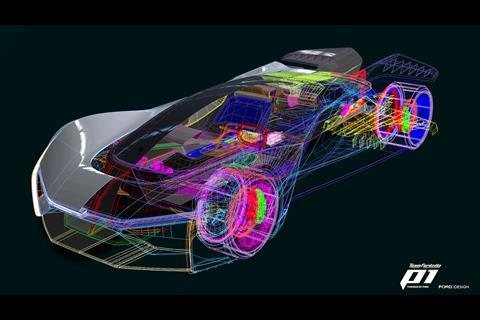 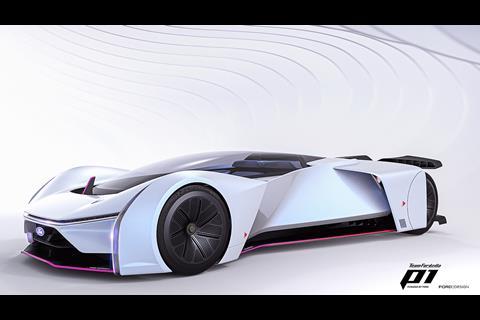 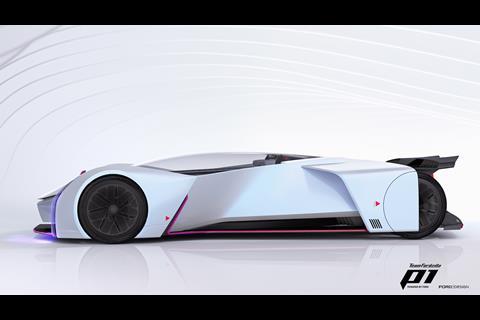 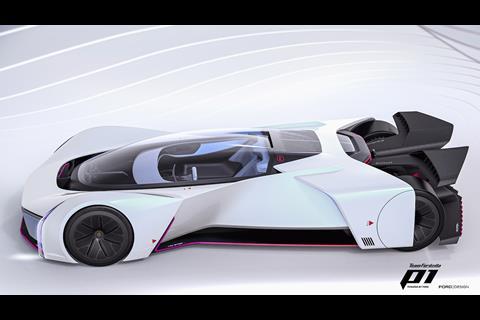 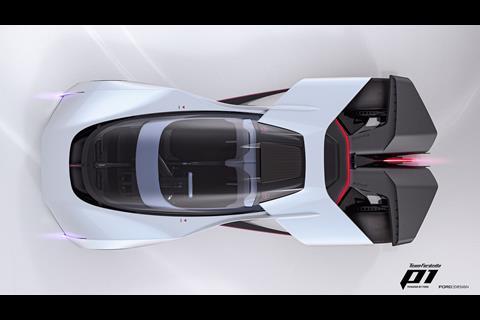 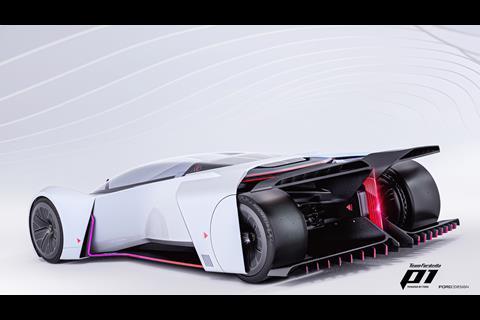 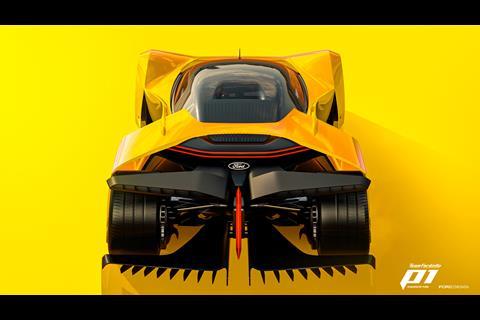 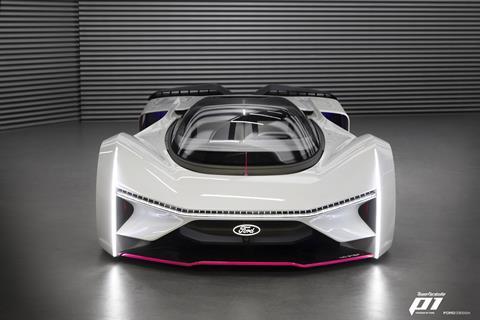 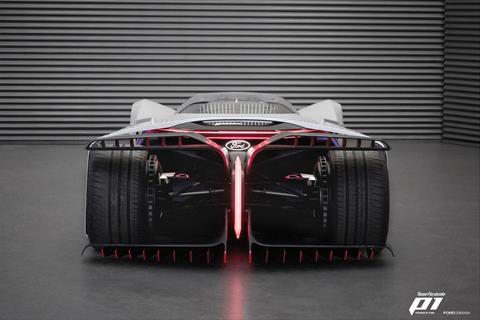 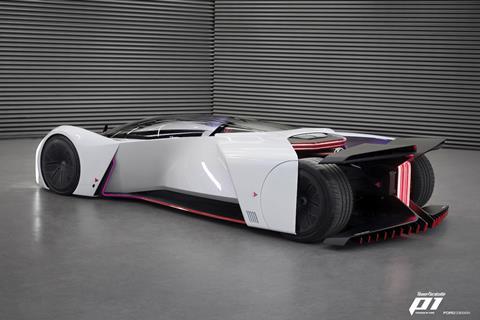 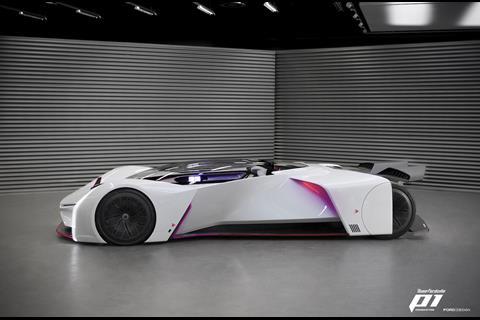 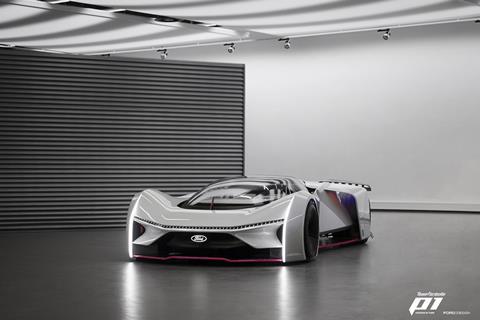 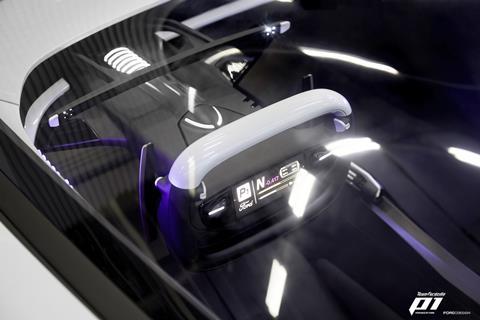 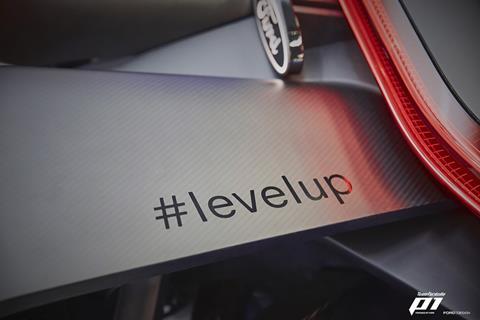 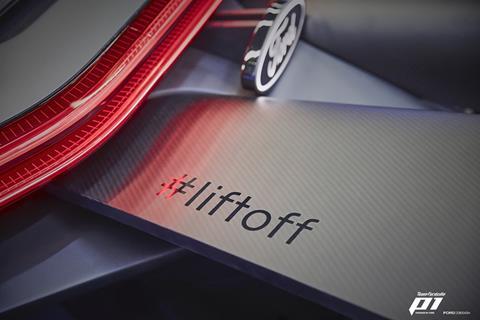 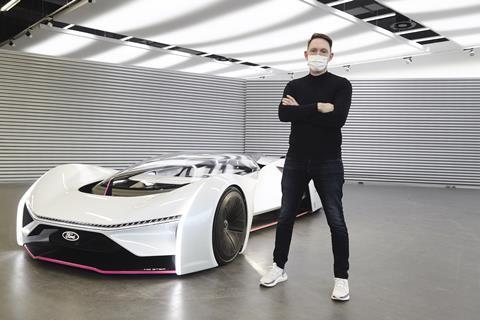 Arturo Ariño and Robert Engelmann, exterior and interior designers at Ford, are attributed with the design of the P1. However, many of the decisions were made in collaboration with the gaming community. Team Fordzilla asked players to vote via Twitter for their favourite iterations of the seat or wheel design, for example, while other decisions were made by players that won head-to-head races.

The P1 is the first Ford to be built without any of the designers having met, with the Covid pandemic preventing any face-to-face design reviews. Instead, the team, which is spread across five different countries, worked remotely to finish the project in only seven weeks.

Speaking to Car Design News, Amko Leenarts, Ford of Europe’s design director, described the benefits of the situation. “Everything went so fast in this strange year, and standing next to the car makes me realise how much we’ve learned again,” he said. “No constraint is holding us back from disrupting the industry by redefining how to design a beautiful car for the digital world.”

The reveal of the P1 comes shortly after Jaguar showcased its Vision Gran Turismo SV virtual race car. The team also built the model in the real-world as a design study.