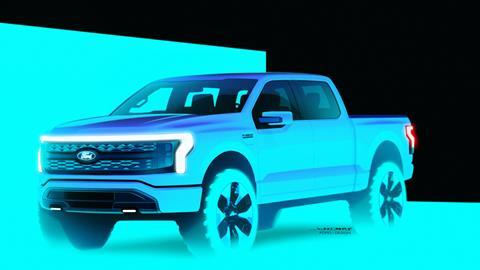 In the United States, the ICE versus EV debate became a battleground in an ongoing culture war. But as more and more combustion era icons go electric, can design help cut through the noise and usher in a new automotive culture?

Remember the ‘rollin’ coal’ phenomenon?’ A fringe pursuit among a certain group of climate-sceptic truck owners, coal rollers adapted their Rams and Fords to spew thick black smoke from their exhaust all over fellow motorists. Prime targets were Tesla drivers whose choice of vehicle marked them out as the type of cappuccino-sucking liberal who’d sneered at the values of ‘real America.’

Rollin’ coal first became a thing around the same time as Donald Trump entered the Whitehouse, and its exponents were no doubt emboldened by 45’s rollback of freedom-constraining environmental policies. ‘Rollin’ coal’ was a soot-leaden, futile fastball from blue collar America aimed squarely at a highly-educated, moneyed elite who could buy into a perceived set of higher moral standards. Though tempting to dismiss as a sideshow, rollin’ coal mirrored the political climate – General Motors, for example, initially sided with President Trump over California’s stance on carbon emissions.

The automotive world has always been an exercise in personal projection – you can tell a great deal about a person’s political and cultural beliefs, not to mention their social strata they aspire to belong to, by what car they drive. As culture war hawks became ever shriller, it was inevitable that car ownership would become a battleground: Conservative vs Liberal, Republican vs Democrat, ICE vs EV. Still, the current front lines are more blurred than they once were. The Toyota Prius, formerly the preferred vehicle of eco-conscious, San Francisco-types beautifully lampooned in South Park, is now synonymous with Uber drivers adrift in the capricious waters of the gig economy birthed by the very same culture.

With the arrival of an electrified version of Ford’s best-selling truck, the behemothic F-series, the lines are further disrupted. The F-series has undoubtedly doused more than its fair share of Elon Musk fans in angry clouds of black smoke. Now, with the unveiling of F-150 Lightning, Ford has launched a vehicle incapable of such noxious feats.

Even coal rollers may feel less antipathy towards battery-power when they discover there is an expansive, and fully powered storage space where the engine used to be

In cultural terms, it feels like a sea change. Eulogising about the virtues of EVs from the cockpit of his beloved ’68 Corvette Stingray, President Biden invoked a Fordian spirit of forward-thinking and innovation during his presidential campaign. The Lightning embodies that vision of American industry. But to maintain its spot as the top seller, the F-series will have to tow Ford’s long-established customer base along with it as well as tap into the nascent EV market, which still accounts for a small fraction of vehicles sold in the US.

How to do this? The answer lies in good design. One of the key reasons why the F-series has endured is it has consistently delivered on the Ford-tough promise, however archaic that might feel in today’s emasculated, digital culture. As Ford will tell you, the list of innovations attached to the 45-year F-series project is lengthy: the luxury Five Star Extra Cab, anti-lock brakes, aluminium chassis and Ecoboost engines, to name a few.

Understandably Ford has been keen to talk up the capabilities of the truck. Even coal rollers may feel less antipathy towards battery-power when they discover there is an expansive, and fully powered storage space where the engine used to reside. And how about the towering reserves of torque, delivered in an instant. Couple this with a low-ish price tag, and the Lightning’s path to mass market acceptance amid an cross-cultural coalition of traditional and new consumers is clear. Smoothing the transition to the new world, the Lightning’s aesthetic steers well clear of any radical new styling. As The Who once sang when confronted by a new wave of pretenders: ’meet the new boss, same as the old boss’.

Bit by bit, the curtain is falling on the last vestiges of 20th century technology. The Lightning follows on the heels of the Hummer EV – another former gas-guzzler gone green – and Ford’s parallel electrification of a snarling V8 icon, the Mustang. The show isn’t over yet, not while niggling questions about how genuinely sustainable EVs are with regards to the carbon debt battery production owes, but the Lightning is another step towards a new world. Ford calls its latest contribution to the new landscape the truck of the future. Whose future we will soon see, but the conversation has changed for good.