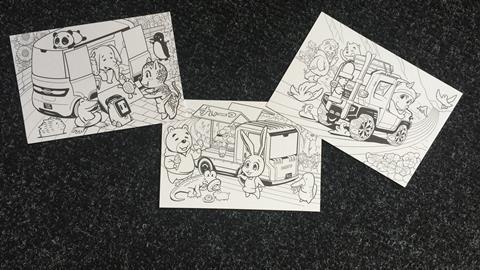 Now that Daihatsu is a much more a Japan-focused brand than in decades previous – it pulled out of the European market in 2013 and became a full-owned subsidiary of Toyota in 2016 – its designers seemingly don’t have too many relevant public outlets in which to show their conceptual thoughts in full-scale. So the good-value, small vehicle specialist marque tends to go big at the Tokyo Motor Show and for 2019’s event it wheeled out four full-size concepts with fully-realised interiors.

Like on the Suzuki stand, information had to be gently coaxed out of their staff, but once a smiley interpreter was found she arranged a meet to discuss a few of them with the equally helpful Tomoyoshi Yoneyama, assistant manager in Daihatsu’s styling department number one. 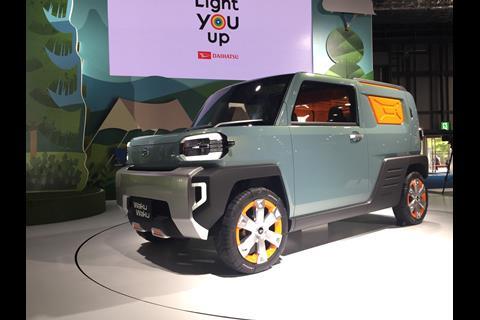 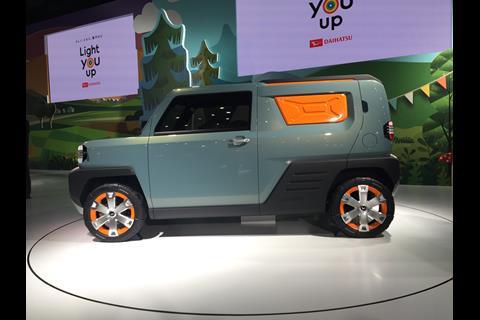 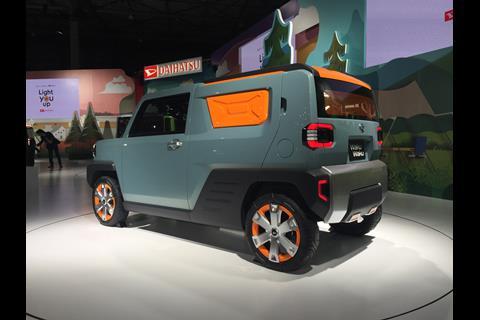 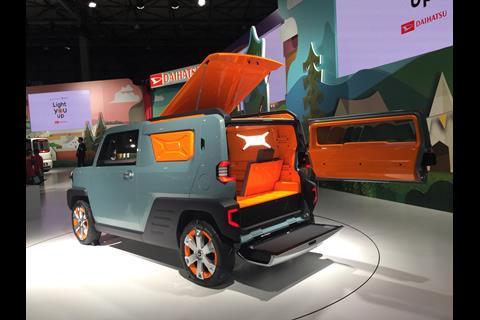 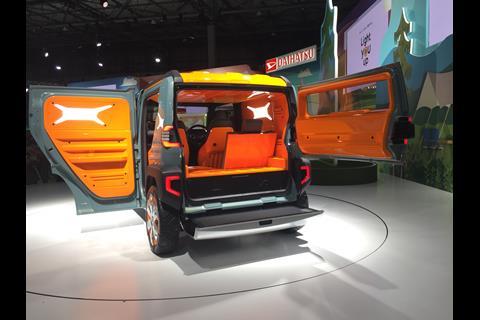 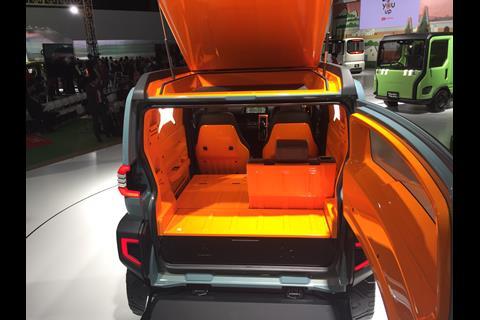 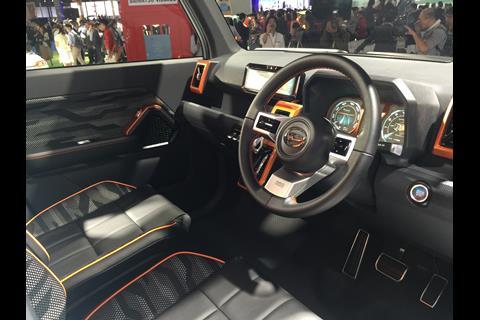 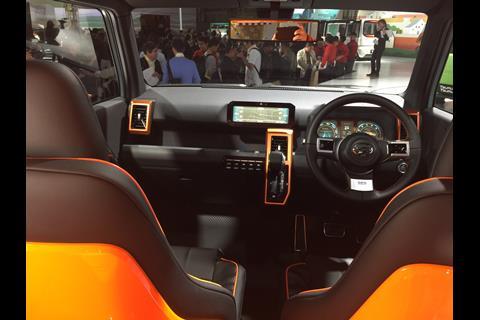 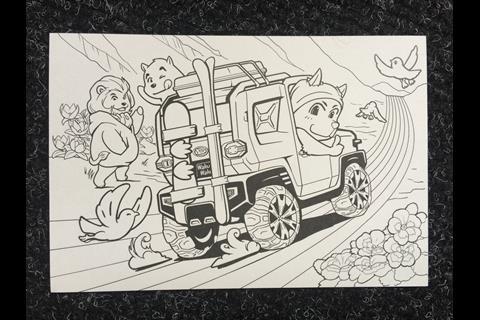 Yoneyama explained that the chunky Waku Waku mini-4x4 (above) is roughly kei-sized and “aimed at students and first-car buyers for outdoor pursuits.” The 3700mm long, 1475mm wide and 1630mm high design certainly has lots of practical and thoughtful function, including an easy-clean compartment to house wet clothes and dirty footwear, cleverly hidden underneath a large roof hatch opening that hinges above the B-pillar. There are also metal-backed rear seats which fold flat to provide a rugged boot floor for sports equipment.

The rear windows are blanked out with an orange-coloured plate (which provides a neat punctuation point against the rest of the grey-blue bodywork) is nicely in tune with the orange-dominated rear-end colour and trim theme, and also provides privacy for changing, as Yoneyama adds: “There are no windows there as we imagined the rear seat area as a secret room”. Up front, the design of the dash and seats look more conventional and production-regular, with a black-dominated colour scheme and orange accents, but still showcasing some pleasingly detailed controls and vents with a predominantly horizontal/vertical graphic theme. 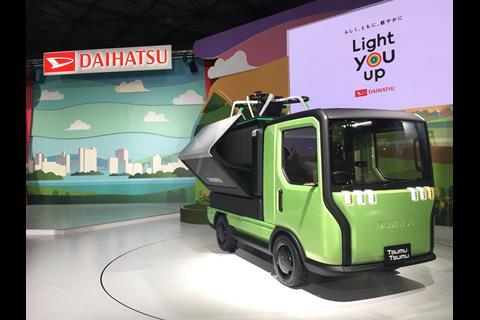 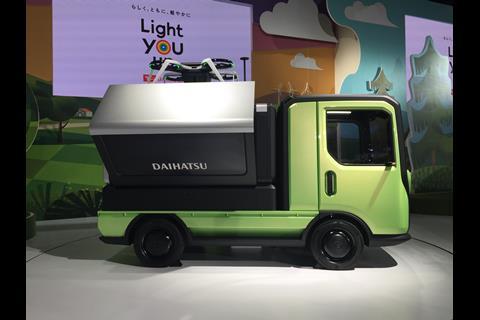 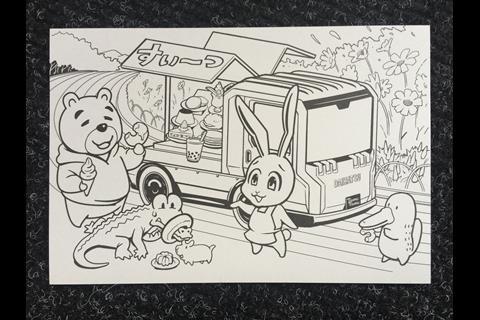 Along from the Waku Waku, the slab-fronted, no-grille bright green Tsumu Tsumu truck channelled Japanese robot helmet-style vibes while showcasing a functional interchangeable cargo load box. The version displayed on stand featured a sizeable drone nestling inside, with the lid of the box removed so the device could fly upwards and off, on command. Yoneyama said that in this configuration the drone is imagined as a crop-spraying tool for farmers, rather than an Ironman support vehicle, but could equally be swapped for a box that acted as a private interior space for humans too.

Beyond those notional uses, perhaps the most interesting design element of the Tsumu Tsumu is its B-pillar-hinged cab doors, whose lower sections wrap around the front of the vehicle. With part of front cab cut away to accommodate this approach, when these large doors are unlocked, a huge and very practical opening is created for easy ingress and egress. 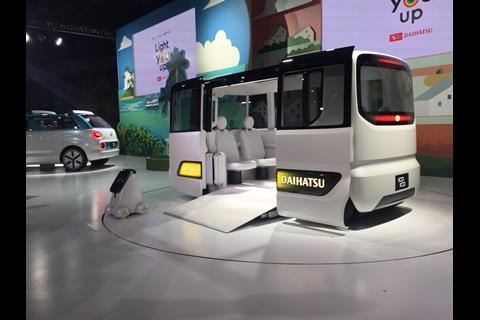 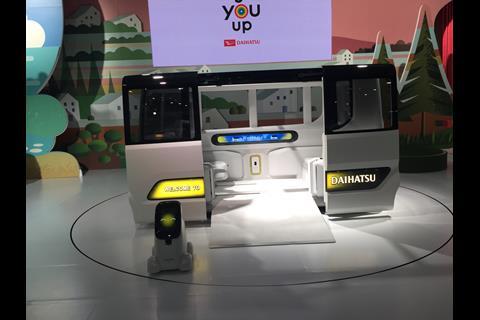 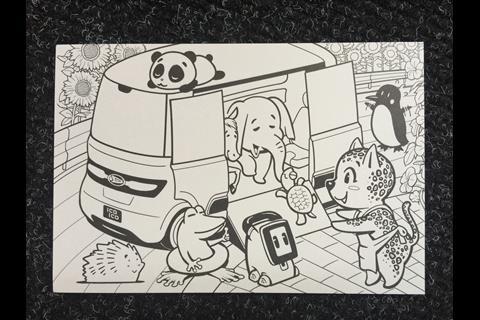 The third Daihatsu Tokyo 2019 concept was the Ico lco – a one-box, first-mile or last-mile, public transporter with an easy-access slope to a very wide side-door opening – which aims to help less mobile wheelchair-bound folk or holiday-makers with lots of luggage, and would likely be owned by a local authority for hire on demand, rather than a private individual. Akin to the Toyota e-Palette in concept, the Icolco also comes with a care robot called Nipote to provide extra assistance. As Daihatsu’s parent company Toyota has a whole department working on robots now – CDN got to see a few small prototypes in action fetching and carrying – this aspect is not as fanciful as it seems, albeit perhaps a decade away from being commercially viable. 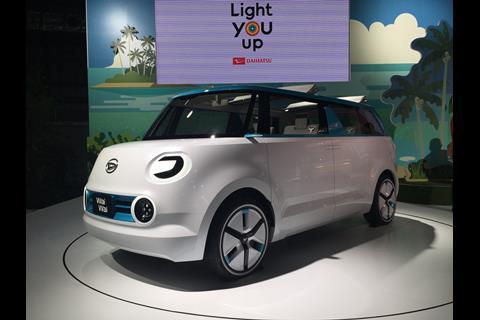 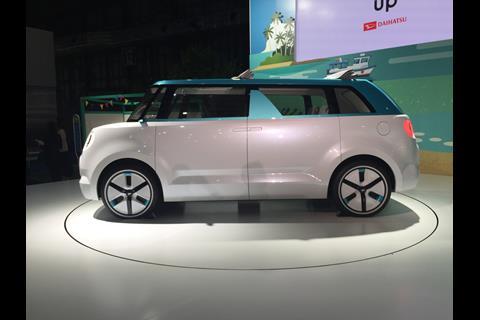 The final concept of the quartet was the Wai Wai six-seater compact MPV, aiming to differentiate itself from other competitors in the class – says Daihatsu’s official PR – by offering a “modern, friendly design.” It is both, but to suggest by implication that the minivan segment is dominated by aggressive designs might be pushing it a bit. Nonetheless, the Wai Wai appeared to be a cleanly designed and well-proportioned family vehicle (that puts the Fiat 500L to shame) whose three-row interior managed to feel spacious, courtesy of two roof openings with fabric covers that roll back like the on Citroën 2CV (and many small cars since). 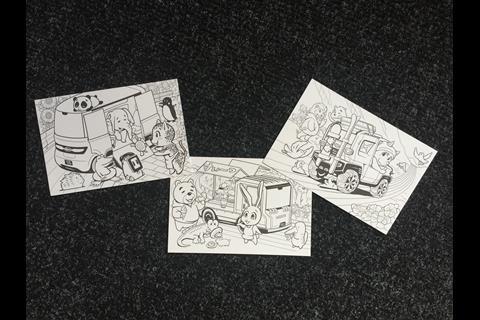 Daihatsu’s scaled-back global market ambitions make it a bit of an unknown quantity to non-Japanese residents these days, but its bold and varied 2019 Tokyo show offering suggests its design staff are still being allowed to dream. Indeed, its large, well laid-out and child-friendly stand – complete with super-low tables and stools with colouring pencils and paper – encouraged its current and potential future customers to dream a little too. Curious and charming.