Automobile Quarterly was a prestigious magazine published from 1962 to 2012. It wasn’t your average newsagent car mag but was of extremely high quality; a periodical book featuring superb journalism and photographs with no advertising. All this automotive journalistic goodness was bound in a wide-format, 100-plus page hardbound book with gold embossed lettering on the front. Each issue was meant to be a collector’s item, and it was! Today, even the index issues are still sought after.

Automotive Quarterly’s publisher was L. Scott Bailey*, a veteran Public Relations consultant, automotive enthusiast, and all-around bon vivant. Bailey had served as vice president and chairman of public relations for the Antique Automobile Club of America. While working at these positions, Bailey recognized the need for a premium automotive journal, one that transcended the traditional car magazine format.

Transcending the traditional car magazine format meant undertaking interesting (expensive) projects. One of these projects would prove to be Bailey’s most ambitious and ultimately mysterious. Bailey purchased a 1965 Mustang – then the darling of the nascent pony car class – and convinced Alitalia to fly the car to Italy (as a partial sponsor of the project), where Carrozzeria Bertone would be commissioned to ‘restyle’ it with a European flair.

Why the Mustang? Bailey explained himself in Automobile Quarterly: “Few American cars of recent vintage have so completely captured the European imagination as has the [new] Ford Mustang. The European motor press has reported on its performance – on the road and in competition – with undeniable enthusiasm. But somewhat less enthusiastic has been their regard for the Mustang’s styling, which one writer has described as ‘a form not fully resolved between a sedan and a sports car.’ In the past year we have had occasion to discuss the Mustang with a number of prominent Europeans. When we were in Italy last fall, we spoke at length with Nuccio Bertone not only about the Mustang but about other derivations of the fastback style, which originated in Italy in 1925. As a result of this meeting, Automobile Quarterly commissioned the Carrozzeria Bertone of Turin to design and build a special-bodied Mustang to be introduced at the 1965 New York International Automobile show.”

Naturally, such a project came with a few constraints. No mechanicals were to be changed. The car had to be fast-tracked to make it back to the states for the New York Auto Show. The colour had to be changed from its production red to something more classic and continental. 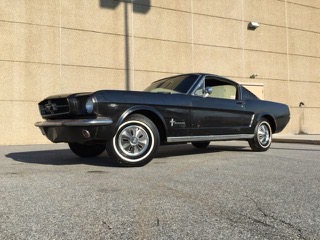 The Mustang that was delivered to Bertone was a fastback 2+2 Mustang (but not a GT), with a 289 cu. inch V8, a four-speed transmission, wire hubcaps and whitewall tyres. Nuccio Bertone and staff looked over the pony car and set to work. Bertone had already tapped one of his new designers to spearhead the project: Giorgetto Giugiaro.

Giugiaro’s solution was to aesthetically lighten and streamline the Mustang’s chunky form. At the front, he redesigned the body to sit lower on the chassis, and gave it a lower, sloping nose. This meant cutting down the radiator in defiance of Bailey’s orders to allow the sheetmetal to sit over the V8 engine assembly.  Also necessary, were three “power bulges” in the hood, with two sporting small vents. This was a bit of Bertone sleight-of-hand as the vented bulges were actually over the shock absorbers. The cowl was also lowered by an inch. 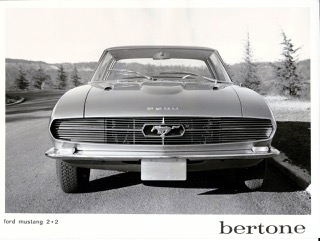 The front mask of the Mustang acquired quad headlights hidden behind retractable covers that extended the pattern of the grille across the front of the car. The Mustang symbol, centred on the fascia, was about the only recognizable piece from the original car. 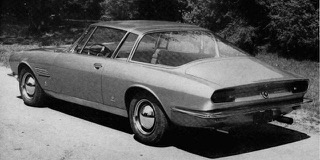 At the glasshouse, the sail panels of the Mustang fastback were replaced by a wraparound rear window that looked like the Plymouth Barracuda of the time. Roof pillars were whisper-thin allowing for more glass. The small rear windows by the rear seats actually visually dropped – the only Mustang to ever have such a feature. The roof was stainless steel; another trick to visually lighten the car. 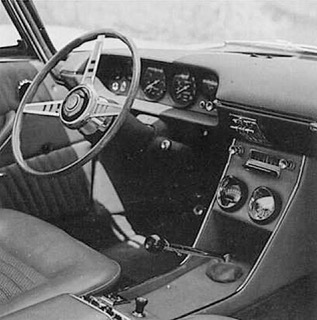 The interior was redesigned and wrapped in caramel-coloured vinyl. The standard gearstick was reused, but two elements of the factory Rally Pac option (clock and tachometer) were moved from their central position at the steering column to occupy a prominent position in the centre stack  The steering wheel was rimmed in wood as, was the centre horn button which sported the AQ quatrefoil emblem. In the rear, the jump seats folded down to create a luggage shelf. 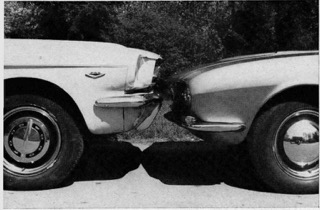 The factory stock wheels, tyres, and hubcaps were jettisoned in favour of a set of smaller Campagnolo 6x14-inch wheels designed by Bertone and cast of a light Elektron magnesium alloy. These were wrapped by black wall radials, replacing the standard whitewalls. Simple ‘moon’ hubcaps were placed on the wheels. The car was painted a ‘metallic light blue’ according to Bertone, a sort of silvery blue/green, which had an elegance that matched the lines of the redesigned car. 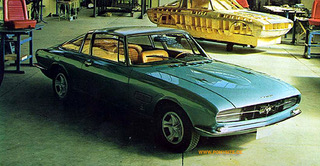 The Bertone Mustang flew via Alitalia back to New York where it reached the Auto Show just barely in time. There it won wide acclaim for its design and was a crowd and industry favourite. It even won Best in Show for the year. Thereafter the car was loaded back on an Alitalia plane for the European auto shows. After touring these shows, again to much acclaim, the car suddenly disappeared.

Later, Bertone advertised the car for sale for $10,000.00 supposedly 1/3 of its original cost. It is not known if a buyer came forth, but when the Bertone collection was liquidated in 2014, the Mustang was not among the cars assembled. Scott Bailey had searched in vain some years earlier for the car – even taking out advertisements in American and European car magazines – but to no avail. Whoever owns it keeps it under wraps. Perhaps it will soon re-emerge at a Concours and a new generation of designers and enthusiasts can once again fully appreciate the design genius of Giugiaro and the publisher who entrusted him to redesign an American icon.

[For a interesting comparison, see CDN’s article on the Corvette Rondine, a factory-sponsored Tom Tjaarda/ Pininfarina design from the same era: /articles/concept-car-of-the-week/2016/09/corvette-rondine].

*Scott Bailey’s obituary, and a good profile of him:
http://www.nytimes.com/2012/07/16/business/media/l-scott-bailey-founder-of-automobile-quarterly-dies-at-87.html