Racing on California’s dry lakes dates back to before World War II, but the sport became a real phenomenon in the years after the war. Hot rods and speciality cars like streamliners would streak across the dry lake beds hoping to set records for speed in the forbidding desert landscape. 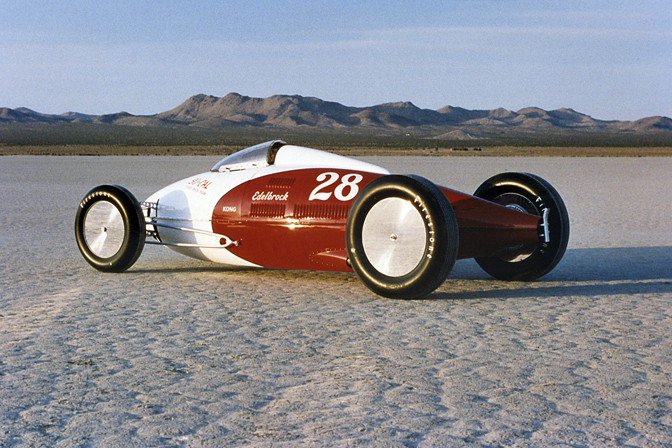 Alex Xydias’ legendary Belly Tank Lakester. Not the first, but the icon nevertheless

At the same time, the types of machine racing at the lakes expanded with the addition of a strange new lozenge-shaped type of car most commonly called a ‘belly tanker’. First developed by Bill Burke, the belly tankers were made from surplus teardrop-shaped fuel tanks that had been suspended under certain fighters and bombers flying over the Pacific. The tanks extended the range of these planes and could be jettisoned when empty. 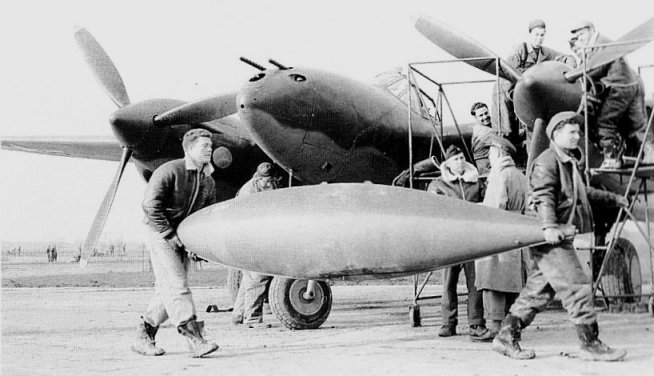 A belly tank being prepared for installation on a P38 fighter

There were thousands of these tanks lying around after the war. Many were recycled, but others were repurposed by hot rodders into sleek, streamlined racers of various types. Available for scrap metal prices, the belly tanks could be combined with Ford axles and flathead V8s to create a homemade racer for minimal cost. 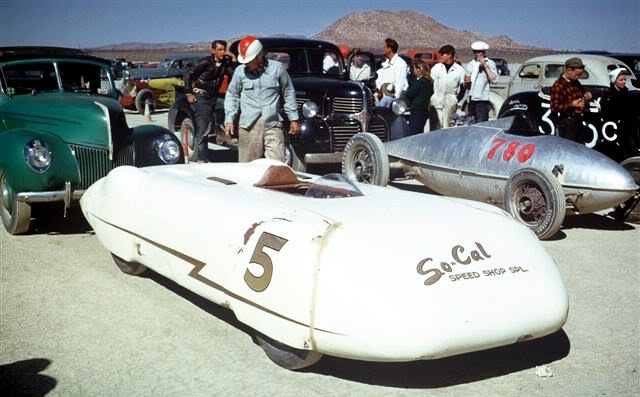 The most famous of these was the SoCal Lakester made by Alex Xydias. Xydias has been an engineer serving on a B17 in the war and then opened the SoCal Speed Shop in Burbank to serve the local hot rodding community. He made a name for himself with the SoCal Streamliner, the first hot rod to top 200 MPH on the salt flats. His assistant Bill Burke, mentioned above, developed the first belly tanker out of a tiny 168-gallon P-51 Mustang tank.  Soon, Burke and Xydias were adopting larger 305-gallon tanks (from P-38 Lightning fighters) into the racers that have become synonymous with the Lakester format. 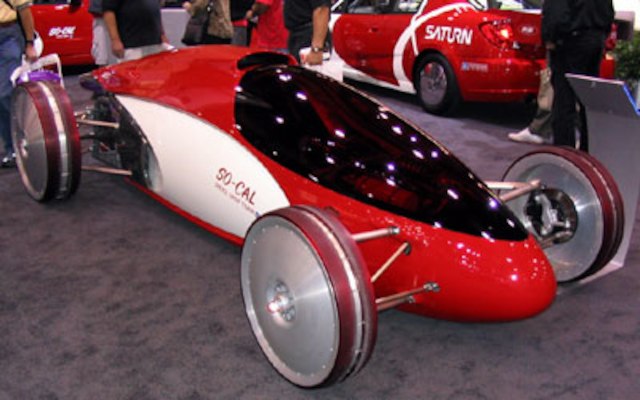 The GM Ecotec Lakester at the 2003 SEMA show

It was the spirit and form of these cars that GM sought to recapture in the Ecotec Lakester concept of 2003. Introduced at the SEMA show of that year, the Lakester garnered lots of attention, mostly because of its retro belly tank shape and references to Xydias’ classics of old. It was more than a casual reference too, as SoCal Speed Shop partnered with GM on the project. 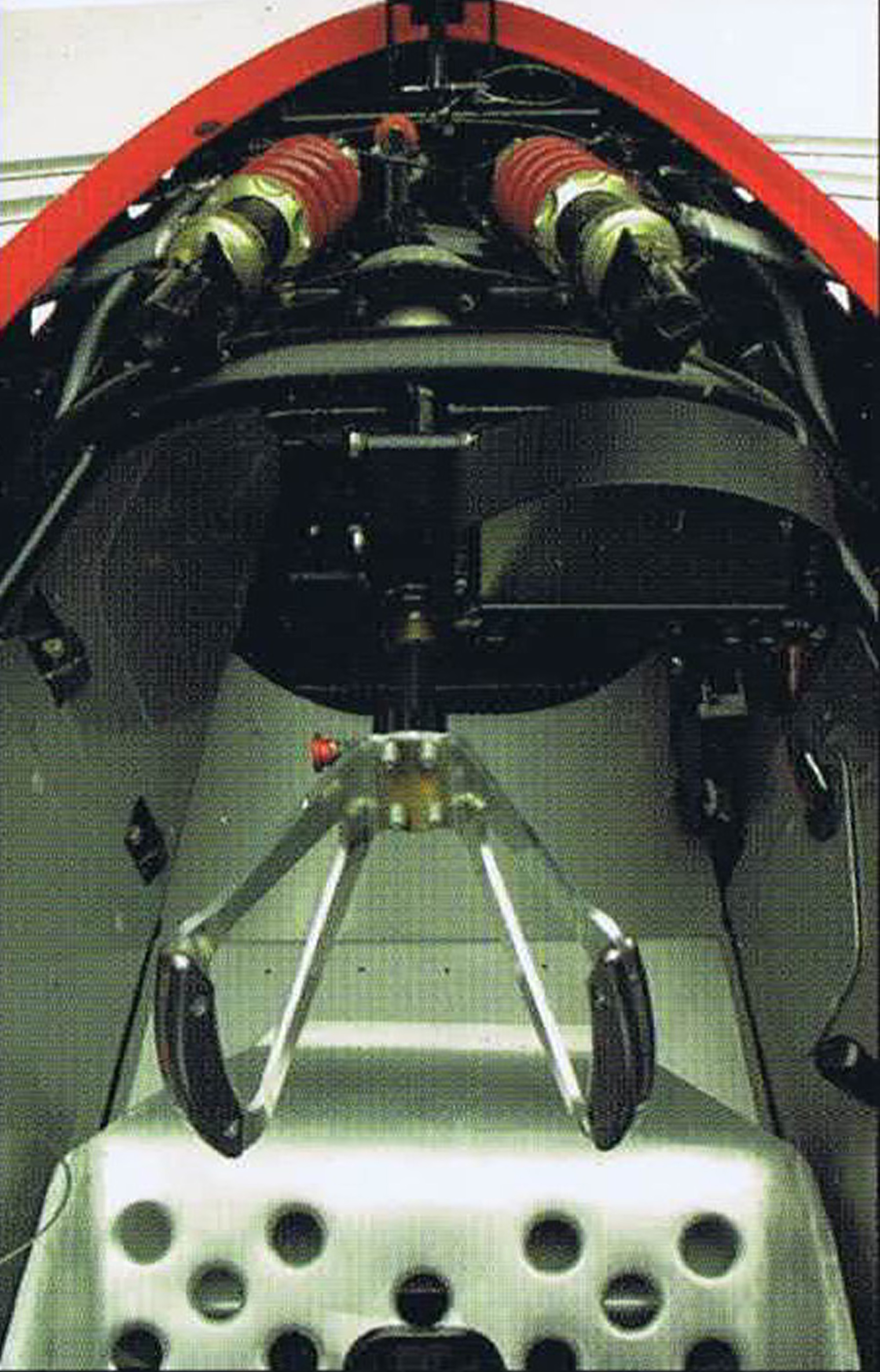 The Ecotec Lakester cockpit – all function, no sci-fi gadgetry here

The Lakester was styled by Frank Saucedo of GM’s Advanced Styling Studio, and engineered at GM’s performance division. The car wasn’t an exact replica of Burke’s original; the design updated the teardrop shape to an enclosed ovoid rather than an open-cockpit speedster. The body was made of carbonfibre and fibreglass, rather than steel stretched around a tubular steel frame, while the canopy was constructed of plexiglass. 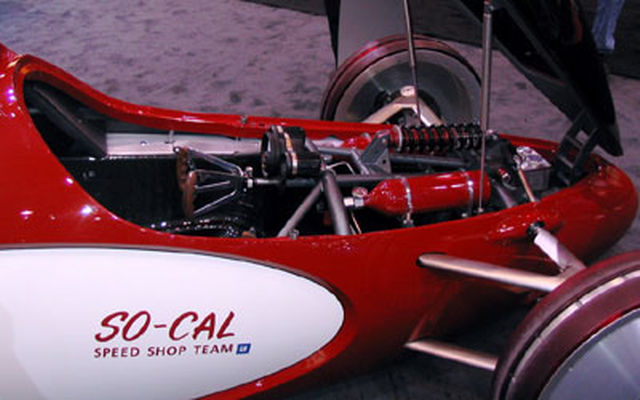 Another view of the cockpit – just the basics, no time for infotainment at 200mph

The Lakester was engineered at GM’s performance division, with SoCal Speed shop consulting at both the preliminary design and engineering phases of the project.  The power was supplied by GM’s signature Ecotec engine, first developed in Europe and adopted for GM products in the US. Naturally, this engine was modified for the SEMA show version of the Lakester. It was supercharged to deliver 200bhp and mounted transversely, no easy feat in the narrow end of a teardrop-shaped body. A four-speed automatic transaxle drove the rear wheels. The Lakester sat dramatically on steel wheels measuring 26 inches (660mm) in the front and 30 inches (762mm) at the rear, shod in a layer of red polyurethane – the same stuff skateboard wheels are made of. 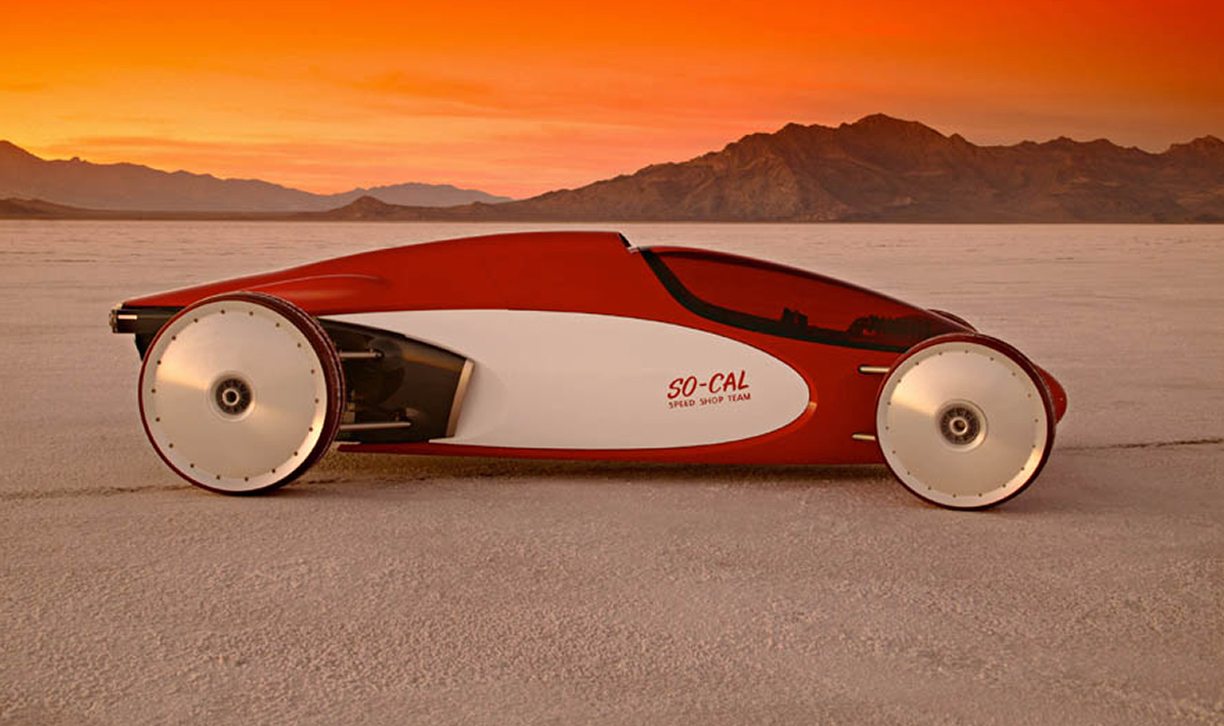 Classic Lakester shape , but with an enclosed cockpit

Purists attending the SEMA show looked at the Ecotec Lakester as a curiosity, but not as a serious vehicle. Many thought it an over-large ‘Hot Wheels’ toy car... but GM and SoCal Speed Shop had other plans beyond SEMA. The car was outfitted for running on the salt flats and taken to Bonneville to try to set new records for its class.

The first year was a modest success, with a possible record-breaking run only nullified by a judging error. 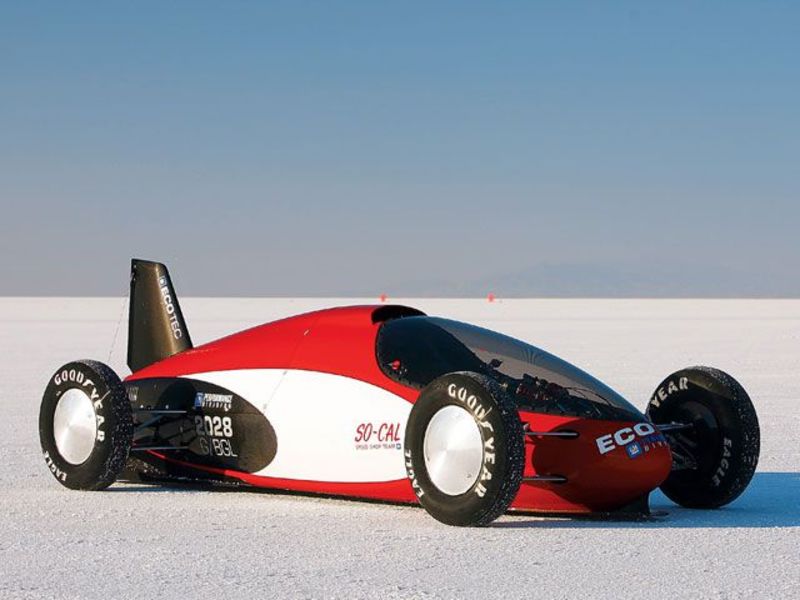 GM vowed to return to the flats the following year, still eager to prove the performance worthiness of the Ecotec engine. Along the way, the Lakester itself got some significant upgrades. A scale model was sent to Auto Research Center in Indianapolis to get some serious wind tunnel testing. When it emerged, small winglets were added, a flat floor was integrated and an enormous vertical stabiliser was mounted at the rear. 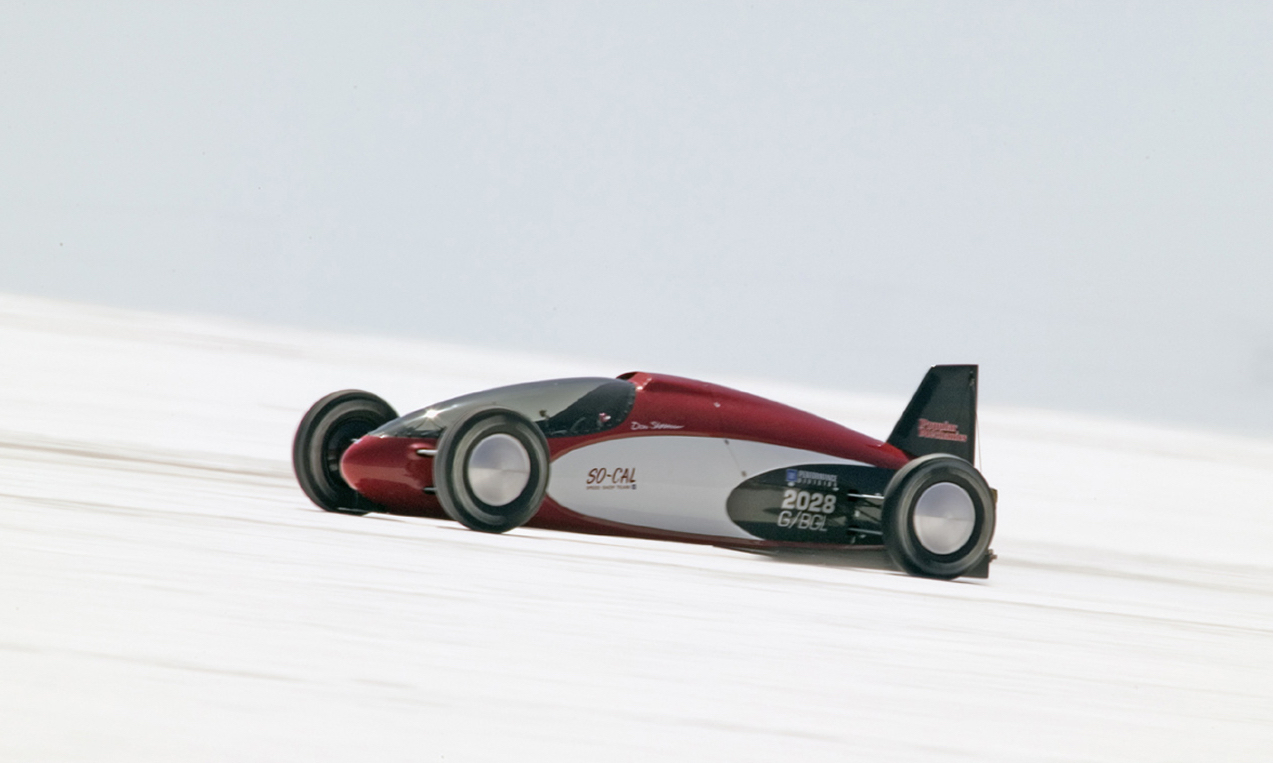 The Ecotec engine, which had been a stock performance model right out of the crate for the first year, was tweaked with wider camshafts and forged pistons, among other improvements. These coaxed another 60 horsepower out of the two-litre engine, taking it up to a maximum of 312 horsepower.

Perhaps the best change of all, however, was the use of special Goodyear racing tyres, designed for the salt flats and riding on 15-inch (380mm) steel wheels, replacing the previous Dunlop set.

The alterations made for a very satisfying set of runs across the Bonneville Salt Flats, with one run clocked at 203mph. The average for all the runs was 189.205mph, good enough to set a record for the Lakester class at the time. 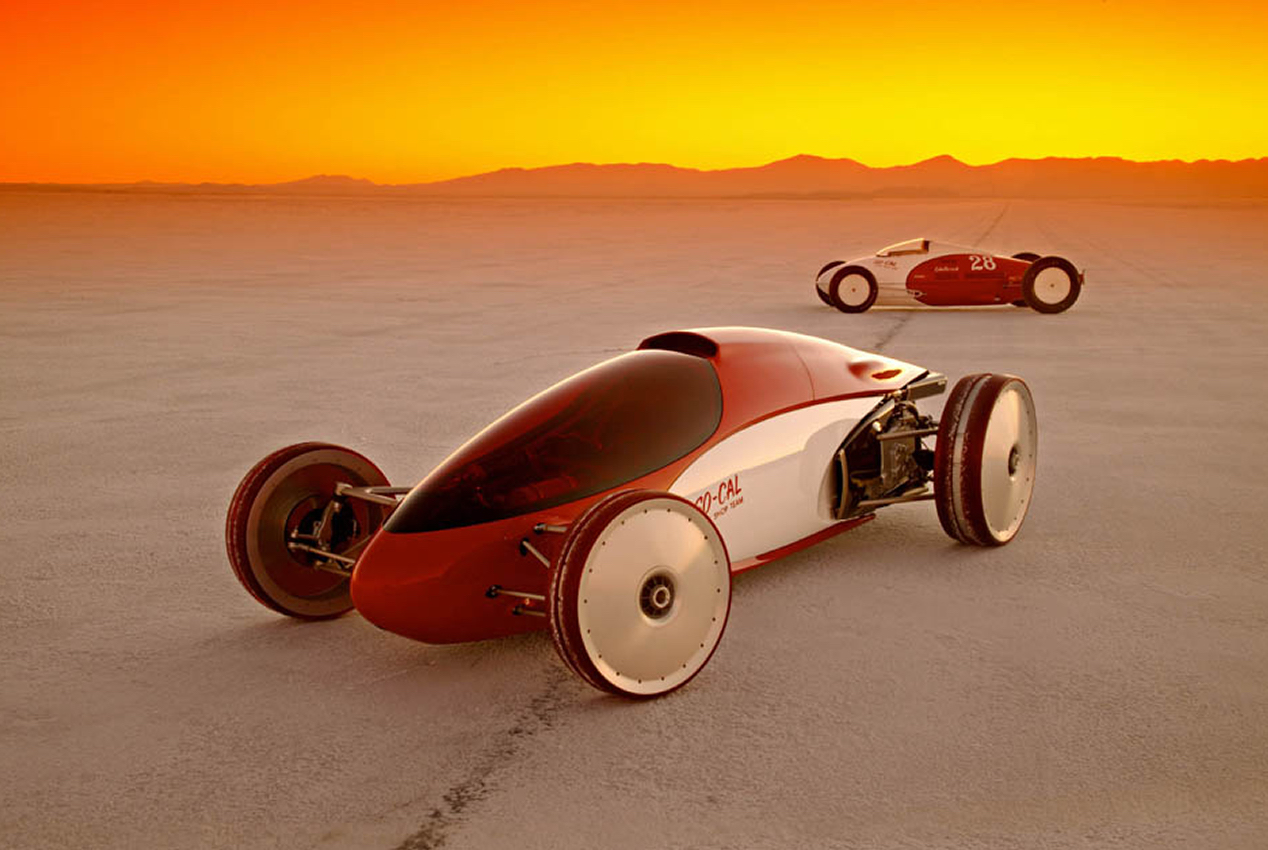 SoCal Speed Shop still exists in Pomona California and is a legend in the hot rod community. Lakesters still race on the salt flats of Bonneville – they have their own class, and records are still being broken.  Perhaps in a new era of electrification we will see a new Lakester with a performance battery pack and massive electric motors. Or perhaps a new kind of sports car can emerge – a single seat, ovoid speedster, a sort of electric Morgan (with four wheels) for the individual enthusiast.

That would be quite a legacy for Burke, Xydias and all the dry lake racers. 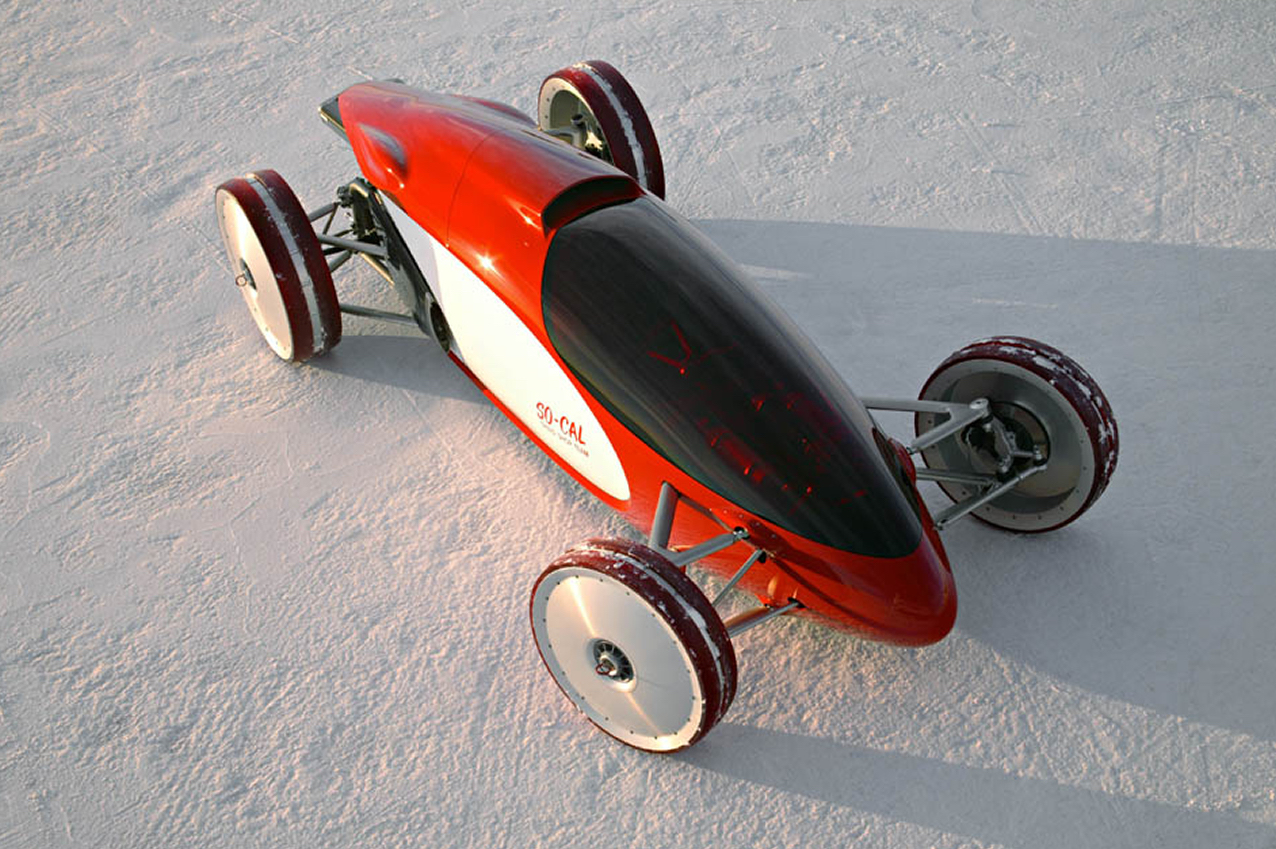 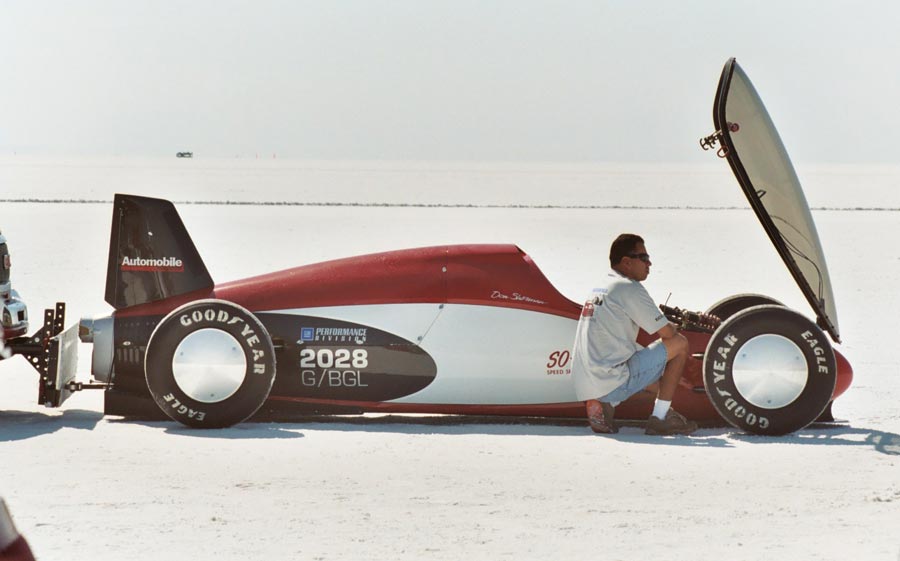