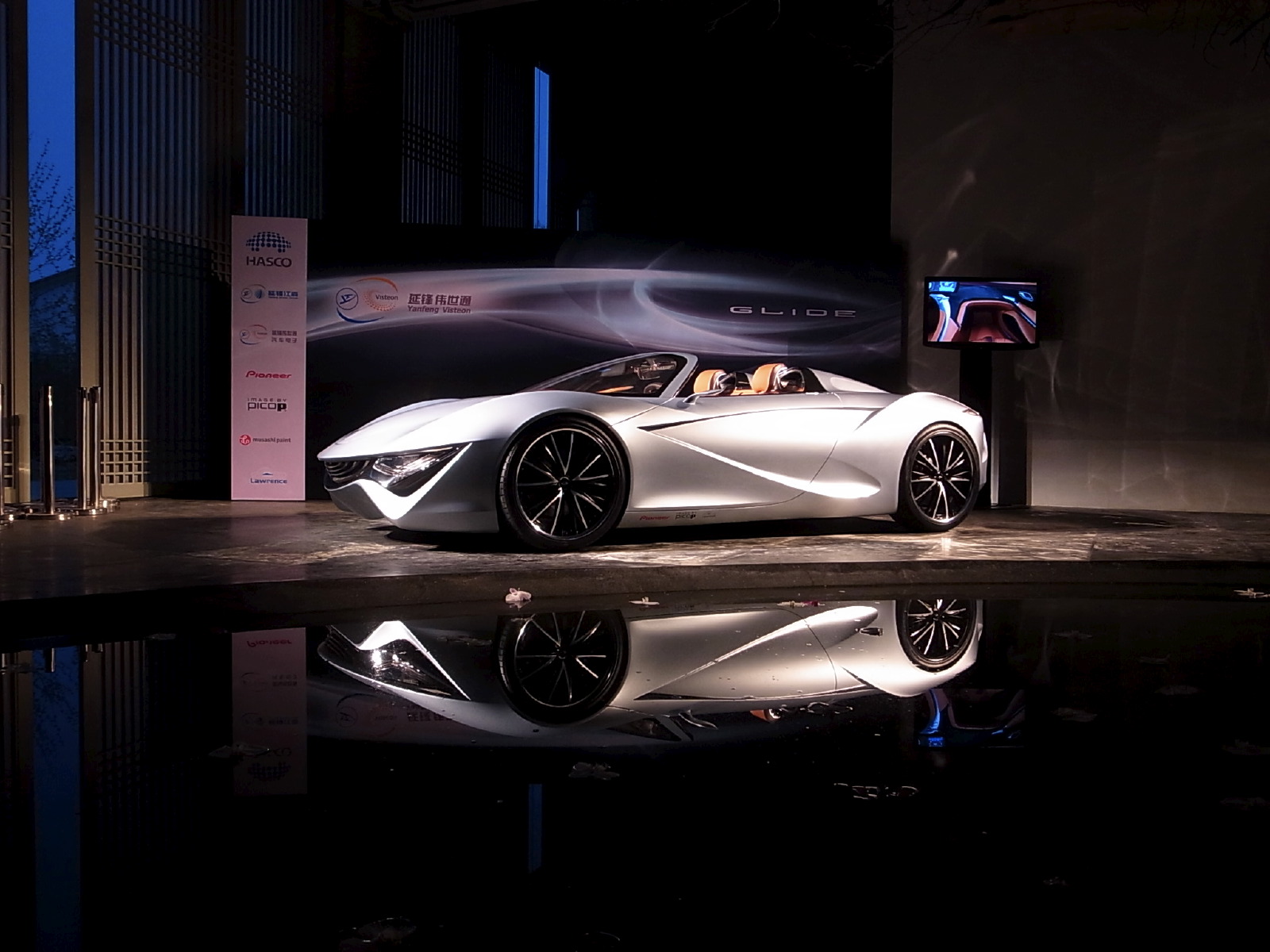 Yanfeng Visteon Glide at Car Design Night Beijing (above and below). Click for larger images 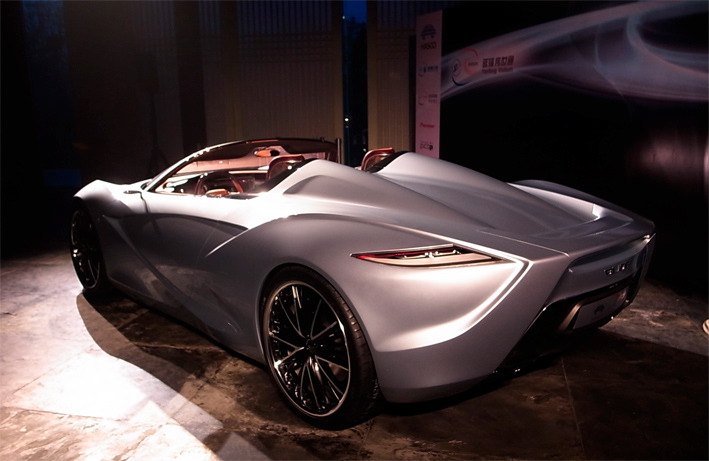 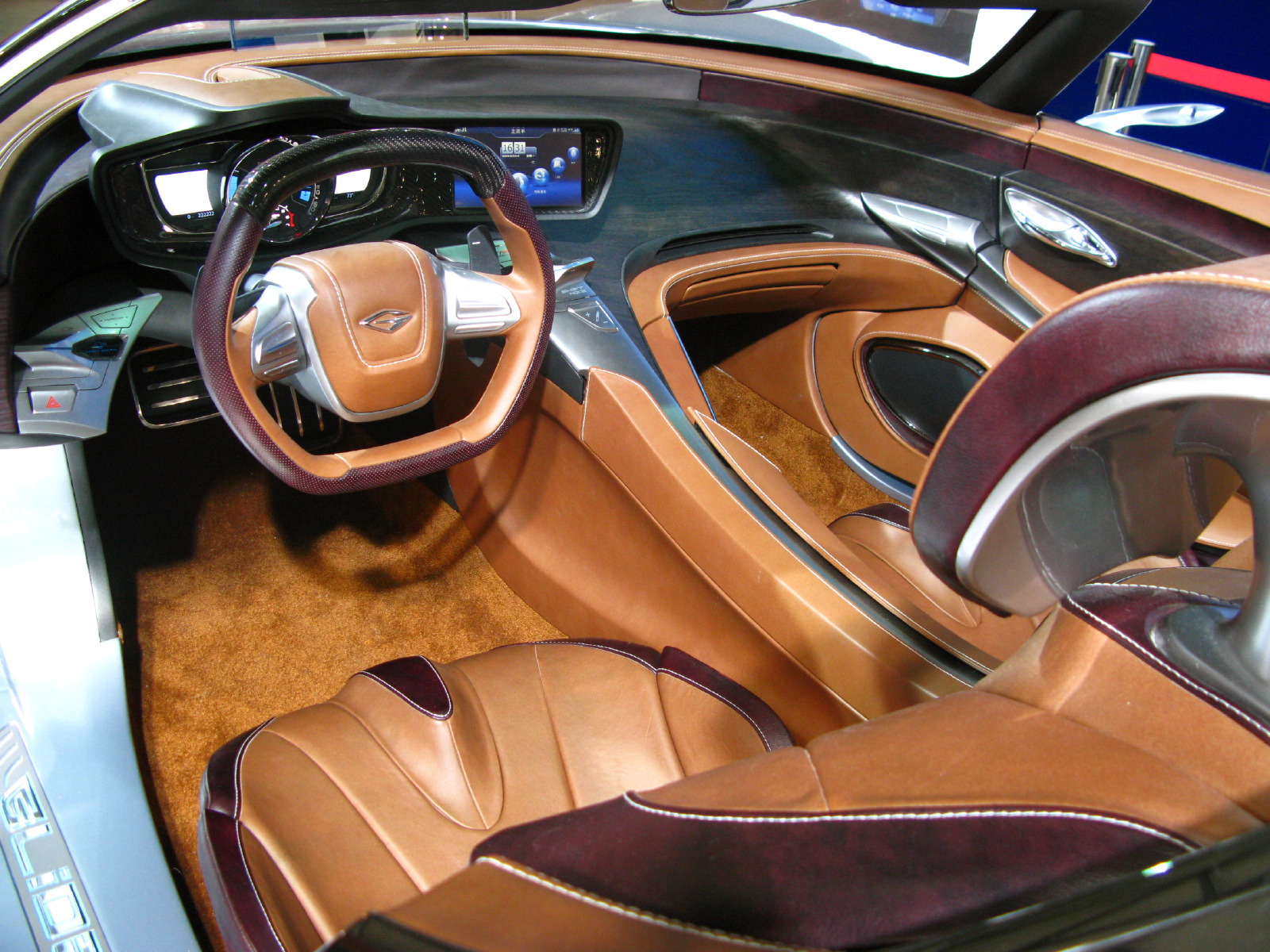 The interior is split into two zones – a hi-tech cockpit for the driver and a sophisticated, comfortable space for the passenger 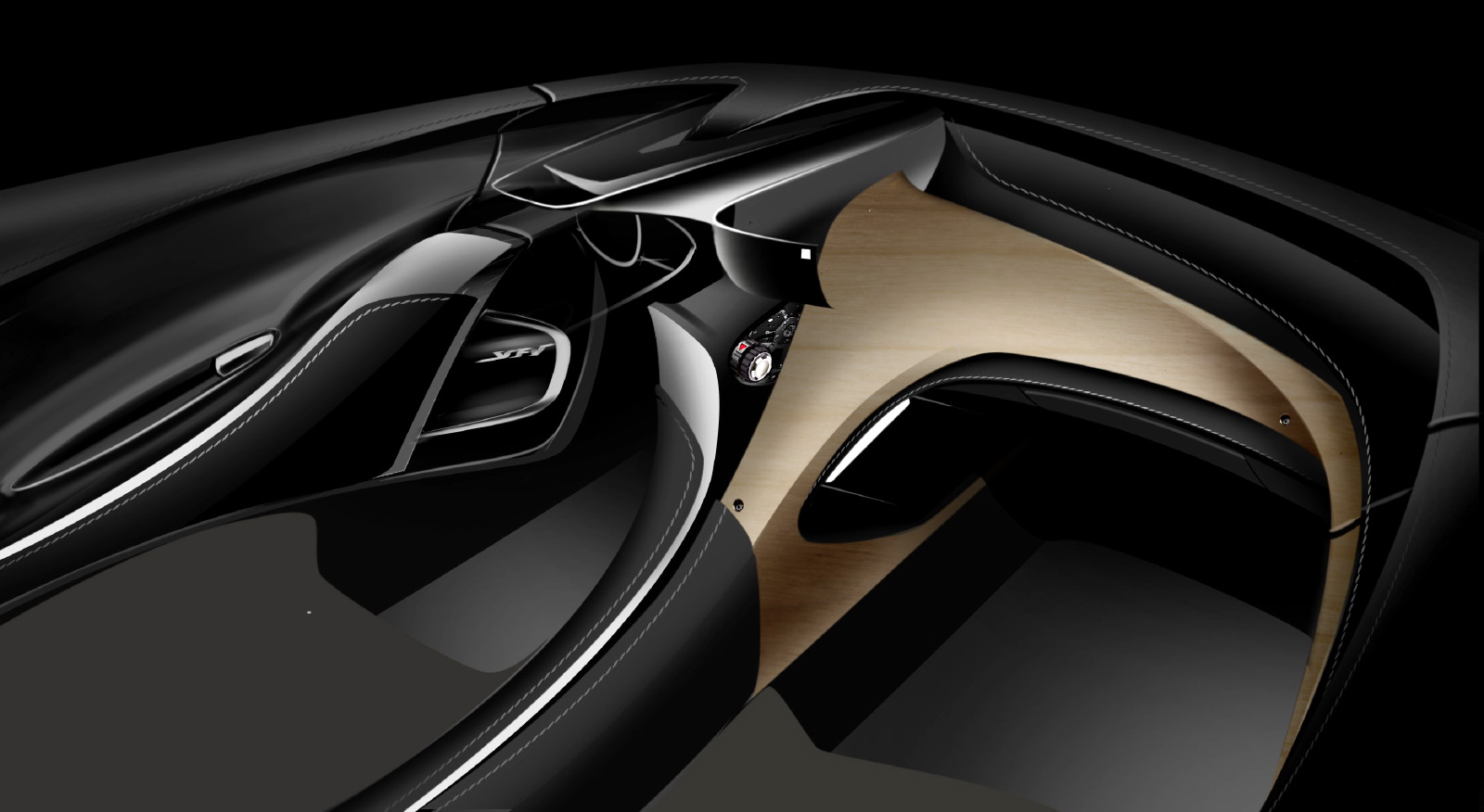 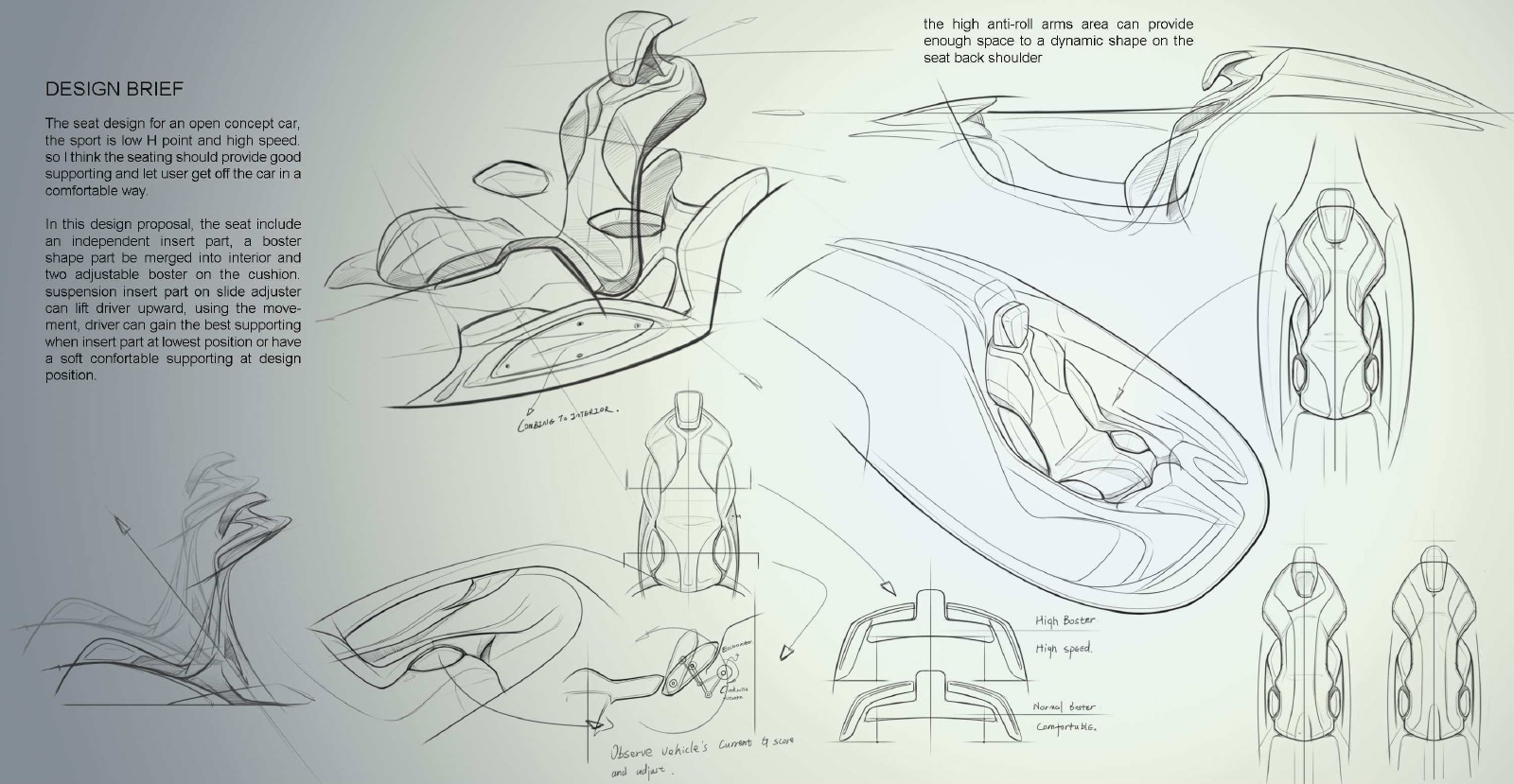 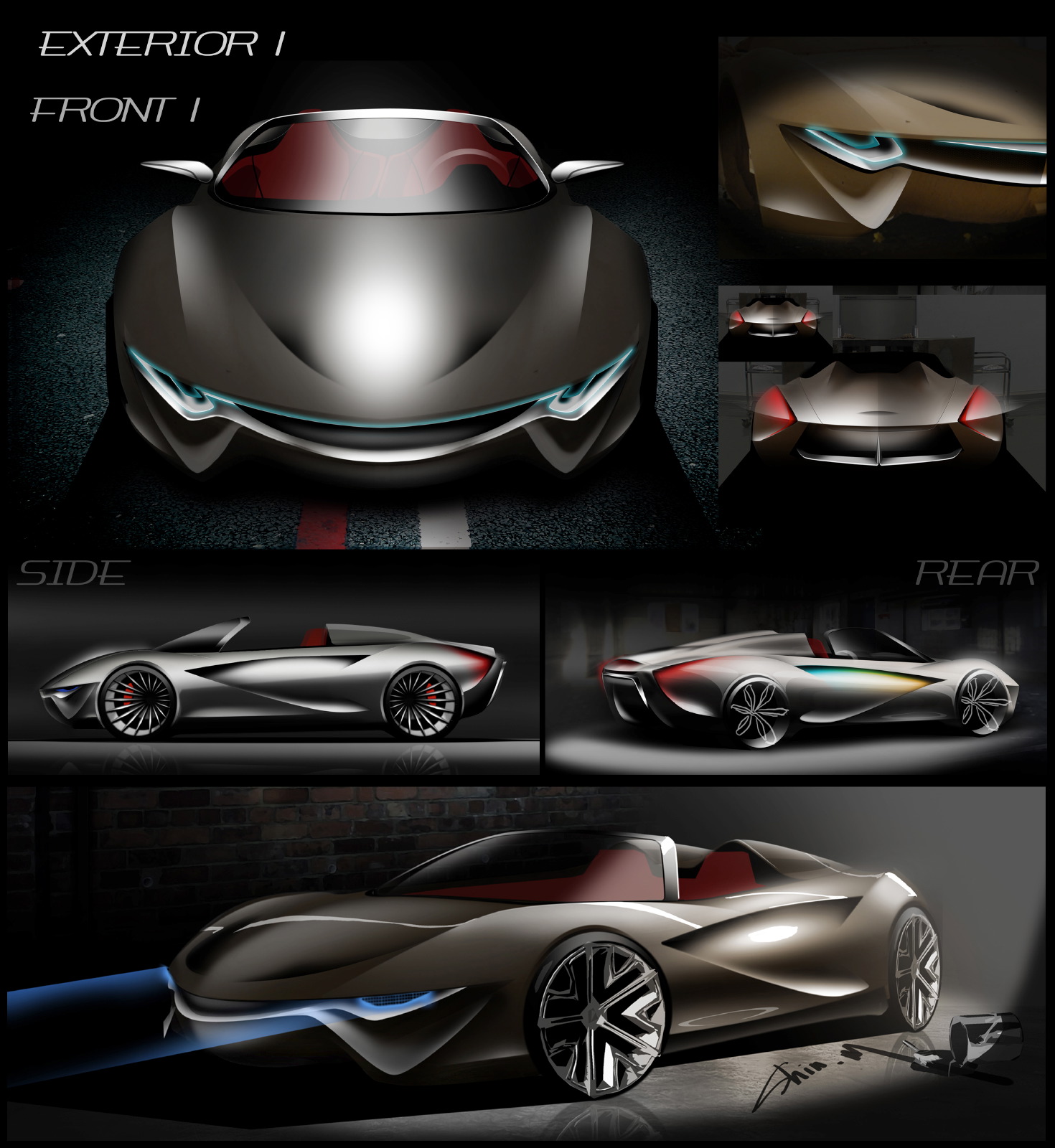 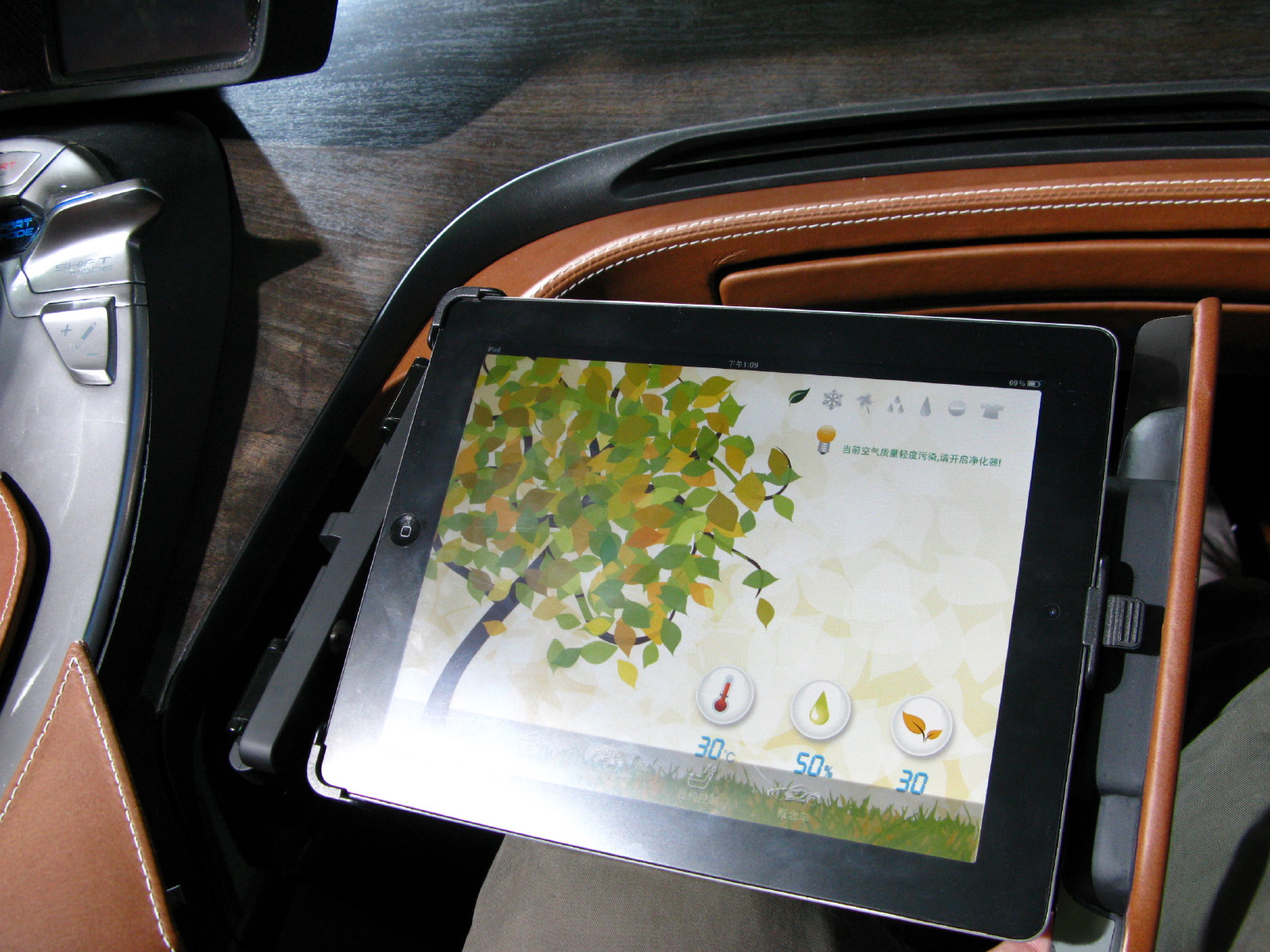 Retractable iPad holder is an example of "Premium Function Design"

Those who attended our Designers' Night in Beijing earlier in the year will have seen the Yanfeng Visteon Glide concept car, a car many thought one of the best displayed throughout the whole motor show period.

However many asked why a Tier 1 supplier Yanfeng Visteon has gone to the effort and expense of creating a full concept car, especially one as exotic as the Glide, especially when the company's core business is designing and supplying interior components.

We caught up with Shizuki Kajiyama, Yanfeng Visteon's Design Studio Manager to find out more about the project.

"The first reason we built this car is that we do exterior styling work, which is unique to Yanfeng Visteon," explains Kajiyama. "From a business point of view we need to demonstrate our exterior competency in how was can integrate our products into the rest of the body." 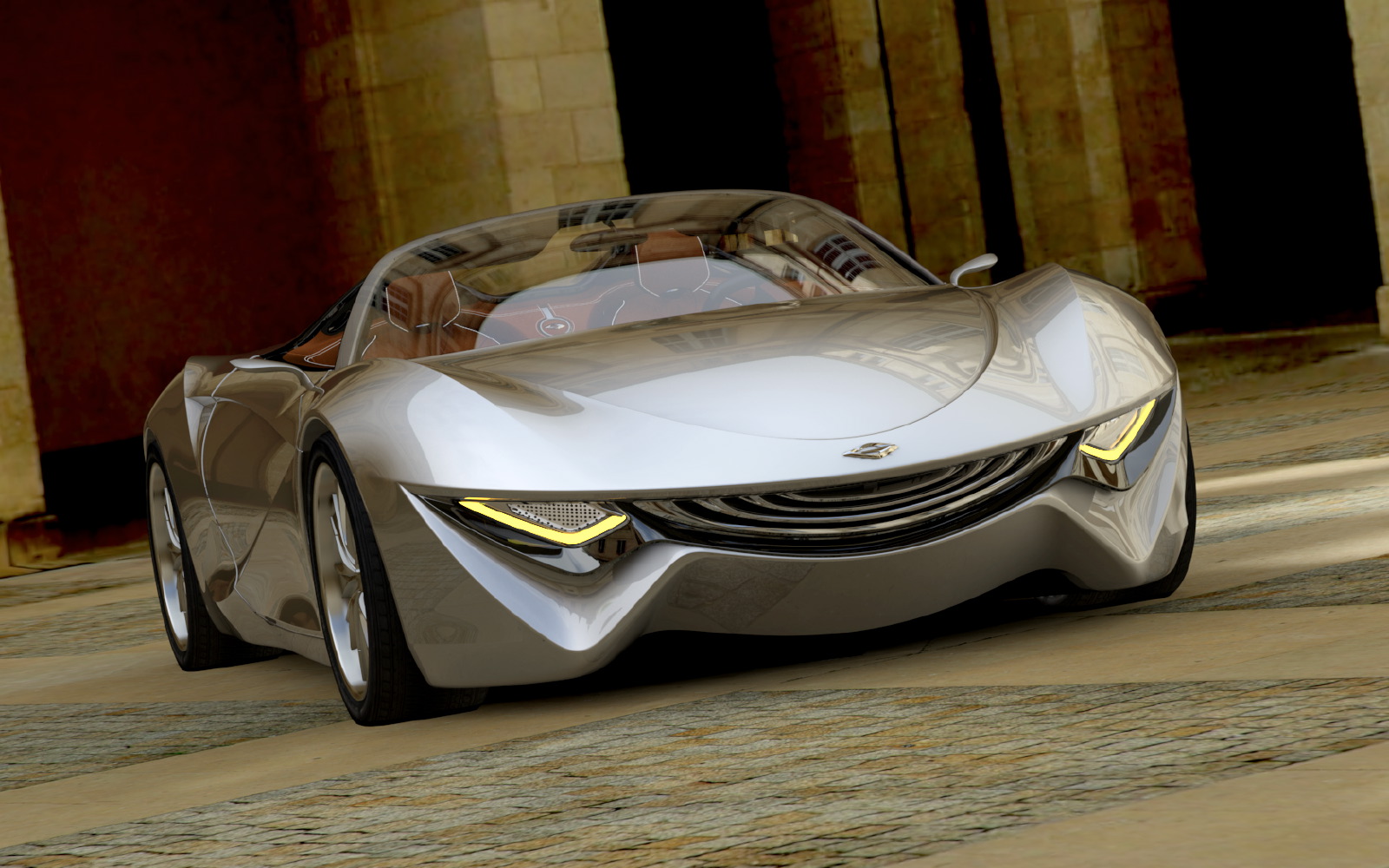 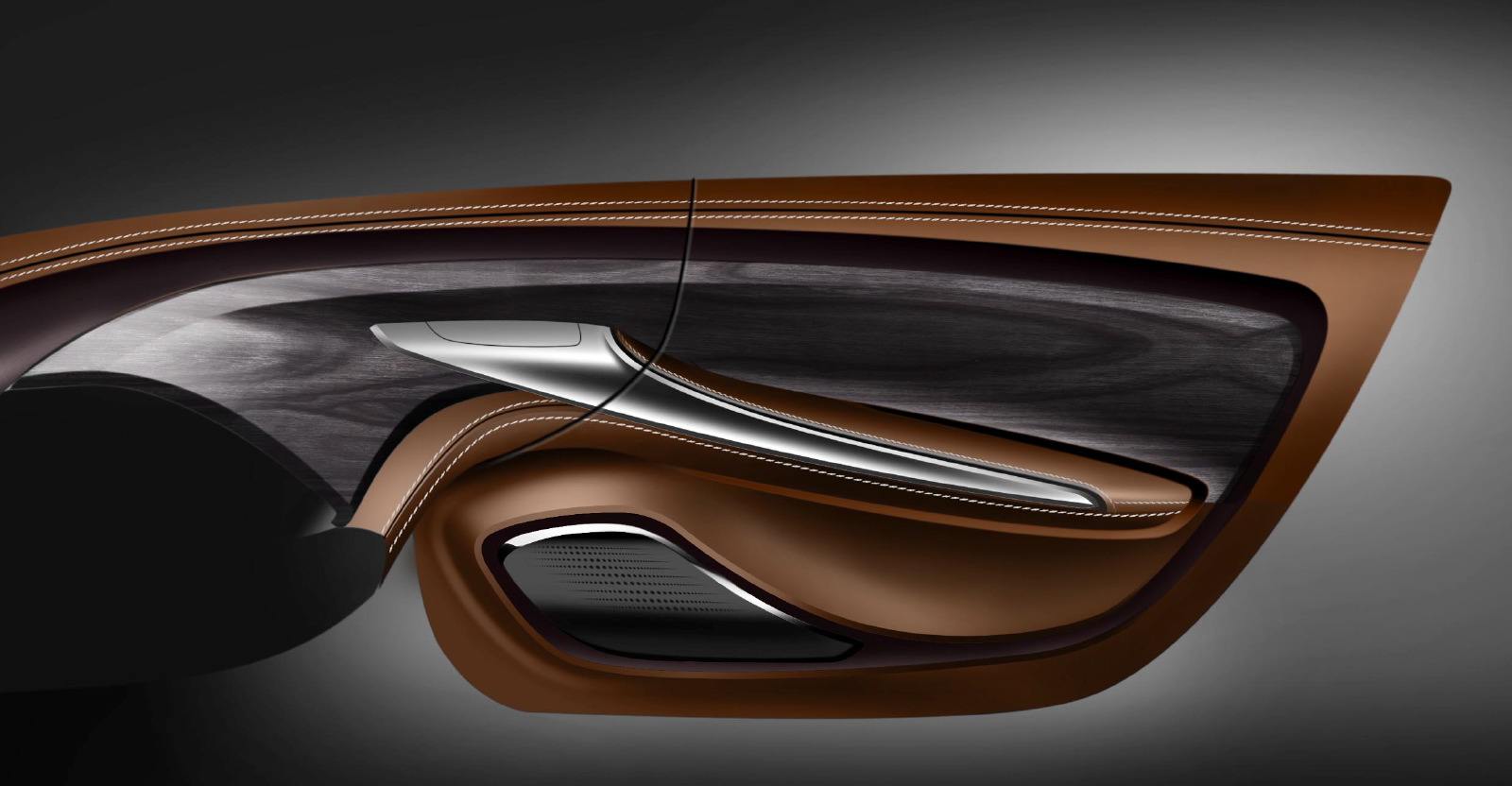 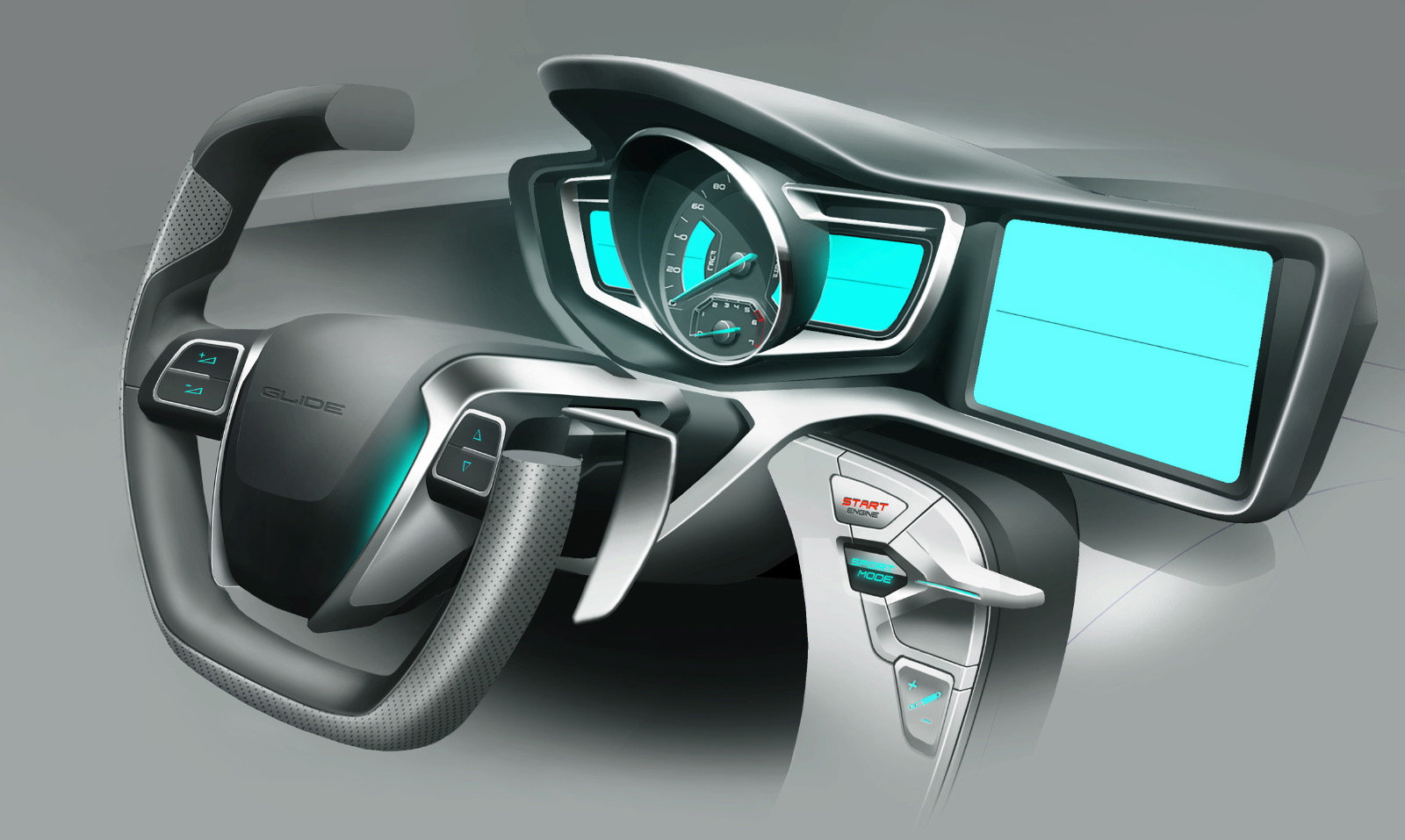 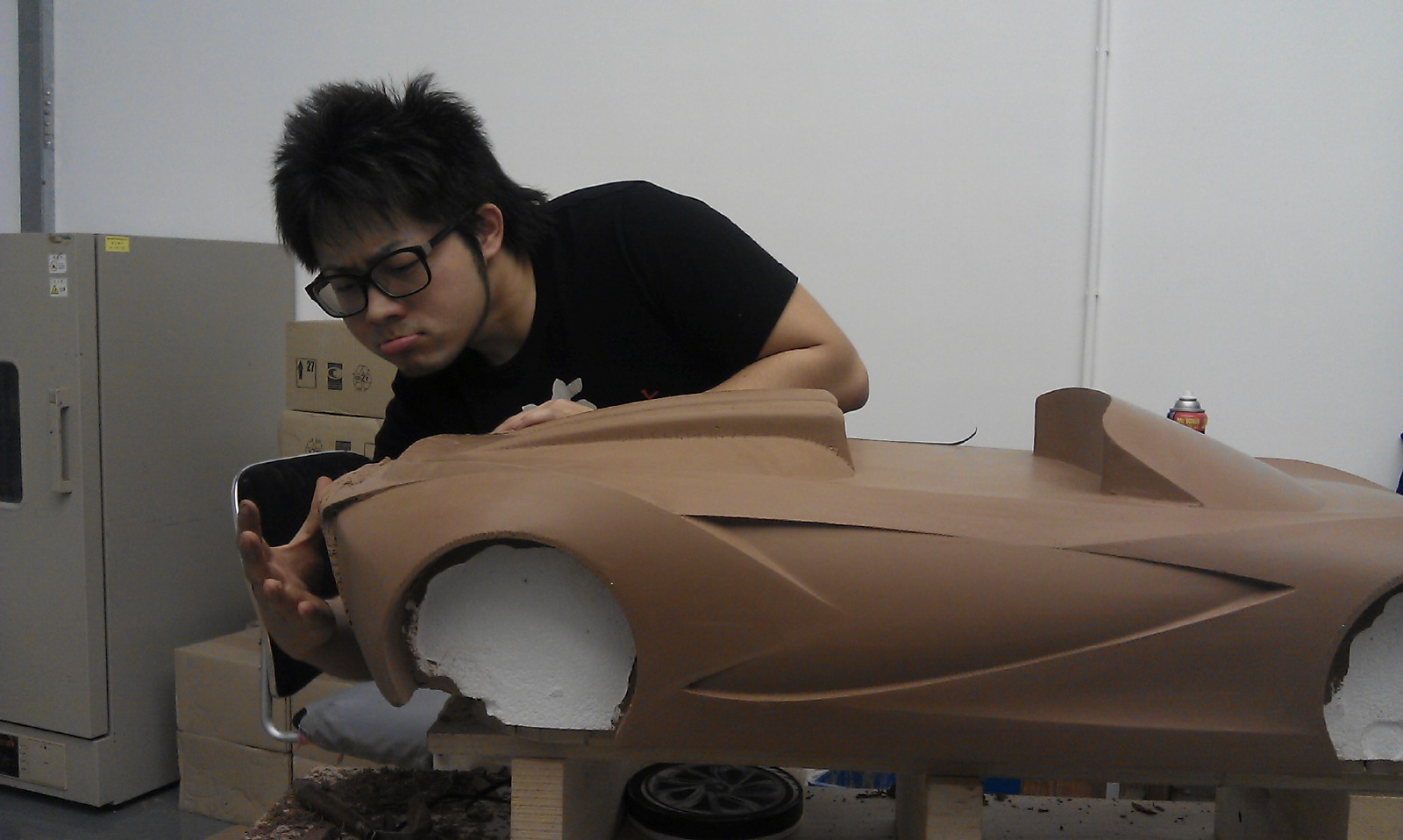 Quarter-scale clays were used to choose the final exterior design 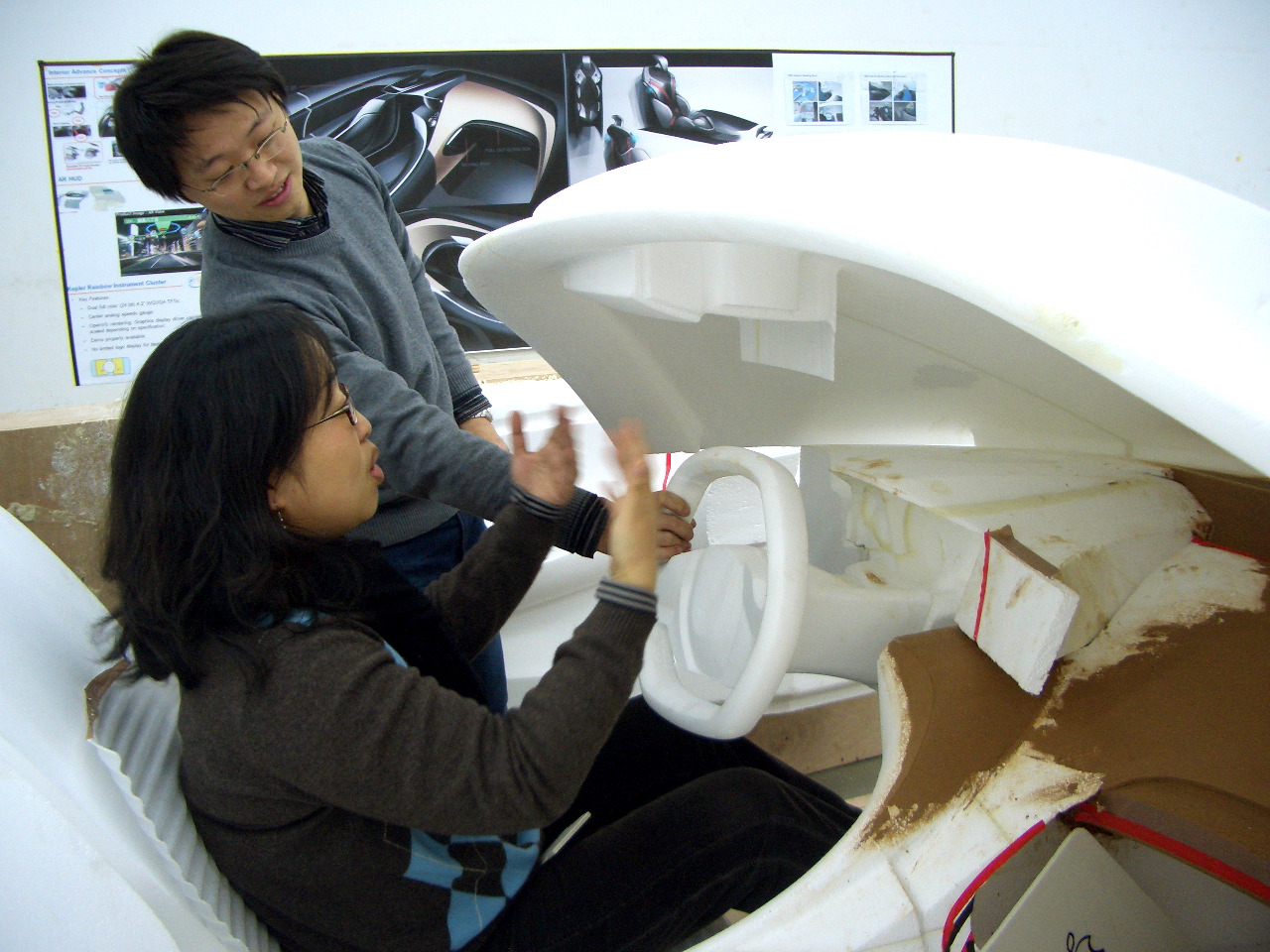 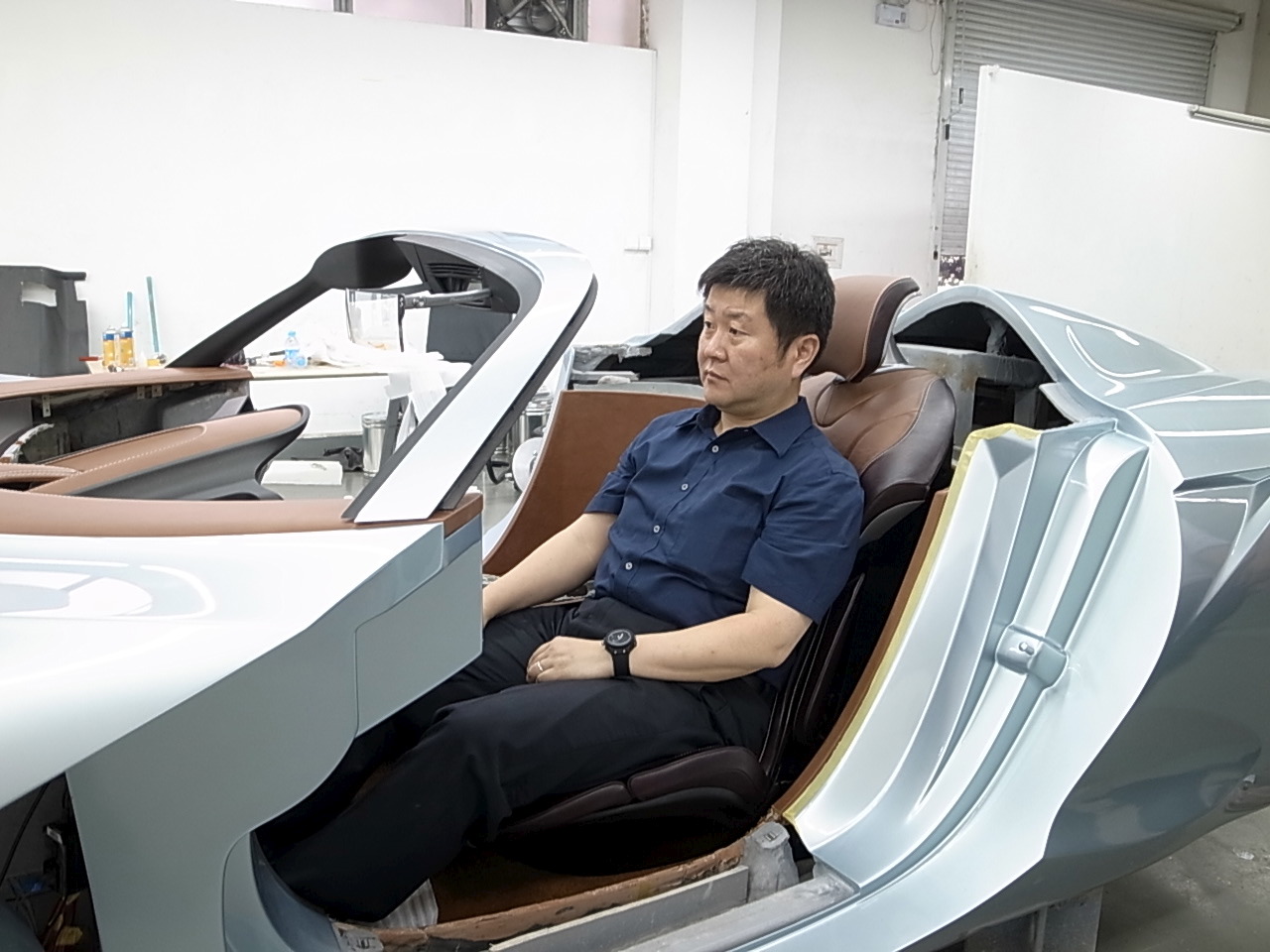 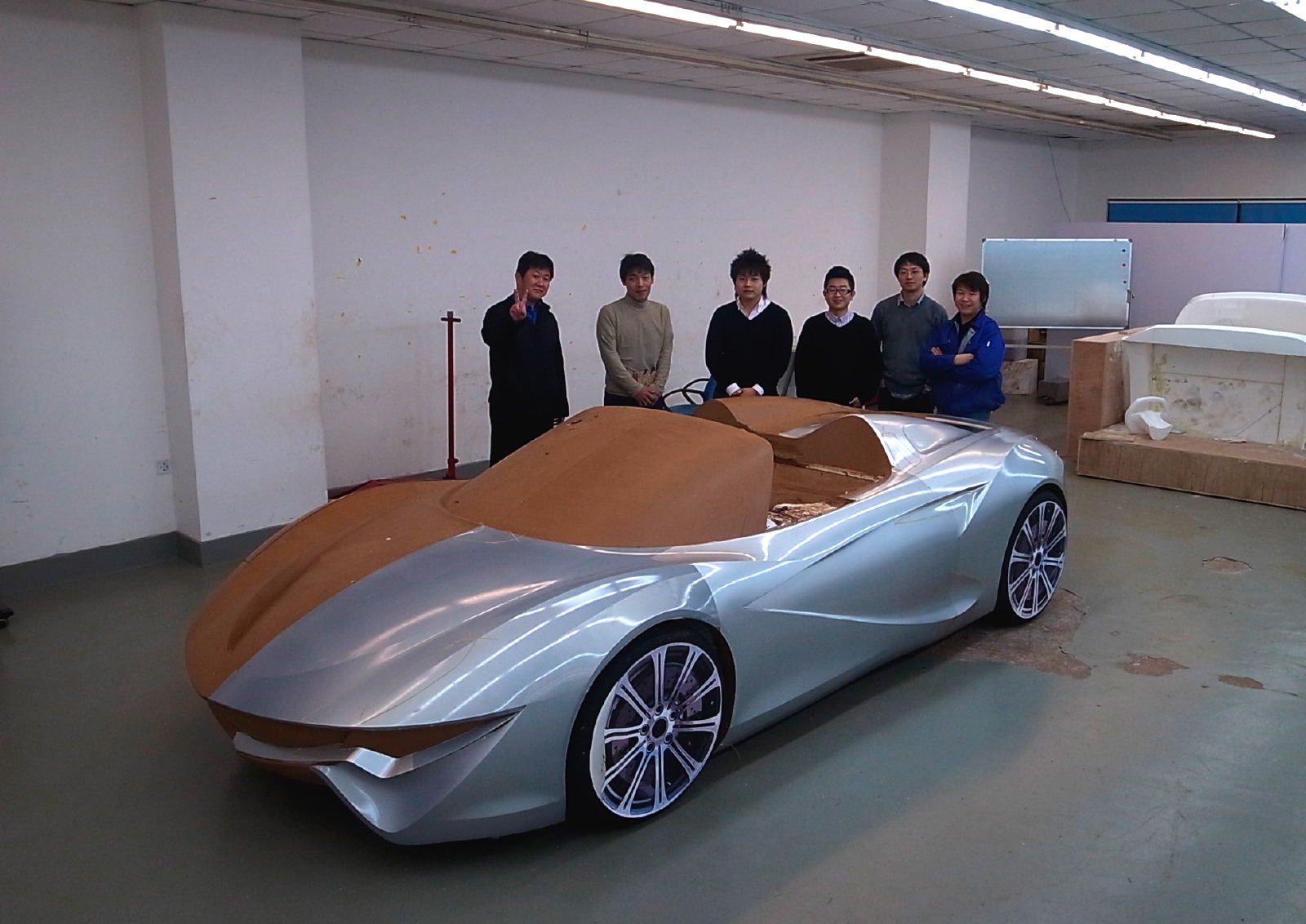 The design team with the full-size clay

However that only tells part of the story. A common-or-garden sedan would have shown this ability. The truth is that the designers at Yanfeng Visteon are passionate about cars, none more so than Shizuki himself. "All car designers want to work on a sports car so this helped us understand what our young designers' emotions are."

And it was the young designers who really drove this project, steered by Kajiyama. The Glide took 8 months to complete, starting at end of August 2011, unusually, with the interior design. "We had the interior theme first as we're an interior supplier mainly. Then I said to the team ‘ok guys now come up with some nice shapes for the exterior that fit with the interior theme'."

This isn't Yanfeng Visteon's first open-topped sports car concept - it showed the Fengyi in 2008 - but the brief for the Glide called for an extra element of sophistication: as the awareness of a new generation of Chinese premium car buyers increases, so too does the need to reflect fashion trends and incorporate unique cultural values, whilst also appealing to global consumers. A tough brief.

As in most studios, the Yanfeng Visteon design team were involved in an internal competition, starting with proposals from four designers for both interior and interior, reduced to two and then choosing the final themes.

"We always work like this," explains Kajiyama. "For the interior the themes were presented as 2D renderings, including key functions, HMI and driver information and HVAC concepts. We care about all the details."

Yan LiXing's theme for the interior is based around the idea of two different walls was chosen as he was named lead interior designer. The left side is more driver-focused and high-tech yet also easy to operate with each function placed in an optimum location. The passenger area is more comfort-oriented and includes a vast area of wood.

"I've seen many interior design presentations and the idea of having large areas of wood is coming back on trend," Kajiyama tells CDN. "We tried to maximize this but it's a challenge to create such a large concave surface from laminated wood, which runs from the IP to the door. We tried many times with our supplier - a British company called Lawrence." The end result is an elegant, almost architectural feel to the IP.

Meanwhile another team at JV partners Yanfeng Johnson Controls, led by Pierre Wabster, started work on the seating design. "After we finished the overall interior 2D design theme we took this to the Yanfeng JCI team and they started sketching to match," Kajiyama says of the relationship. "One thing we stressed is that the driving area has a separate, moveable ‘driving pod' - steering, HMI and pedals all together to fit the driving position." The idea is that a fixed seat and movable IP gives the driver the best position. To make the diver look good is all part of a premium design too, it would seem. The chosen design, by Yan Chao, fit the brief perfectly, while seamlessly blending into the rest of the design.

Once the interior theme was chosen, the team then set about creating the exterior around it. "This time we really focused on the right proportions - very close to the classic sports car feeling rather than a wacky, progressive shape," says Kajiyama with reference to the previous Fengyi.

"For the exterior proposals we had the 2D renderings plus a sketchy foam model. I always encourage the exterior designers to make these maquettes to show main volumes and character lines. Then we decided on one design to make into a quarter-scale clay." The chosen theme was by young designer Shinichi Muto.

The exterior form and surfacing inspiration was traditional Chinese silk and its mix of sophistication, understatement and fluid forms. The key graphics and feature lines reflect this with taught yet disciplined execution, while unique exterior indirect lighting highlights the character surfaces.

"Audi and BMW have already shown light tube technology moving from the front end of the car to the rear," Kajiyama explains. "Interior lighting is very advanced now but this sort of exterior lighting is relatively new thing. To stand out in the dark I think this is a very effective way of showing off sculptural form and brand identity."

It's not just the exterior that has received innovative, premium design solutions. Inside a number of features help raise the standard to what Kajiyama describes as "premium function design".

"On a sports car it's usually a drop-down glovebox but when you do this it hits your knees and this isn't good enough for an upper-market customer," explains Kajiyama. "This uses a push-push operation - we're trying to develop this for premium cars where you need space for legroom."

Similarly an iPad holder answers the demand for tablets in cars and streamlined storage, again push-push. It glides up then you can angle it sideways and rotate. It can also be used for the driver, acts as very secure storage when the car is parked.

Even the iPad software has been integrated, controlling seat adjustment and heating, cooling. This is part of a wider digital HMI package that includes a TFT gauge pack and HUD, developed in collaboration with Pioneer.

The more you explore the Glide, the more you appreciate its worth as a showcase for Yanfeng Visteon's design capabilities in an increasingly brand- and quality-conscious market.