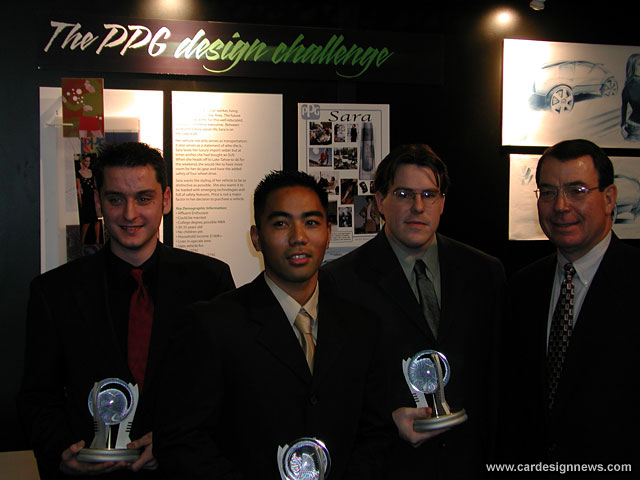 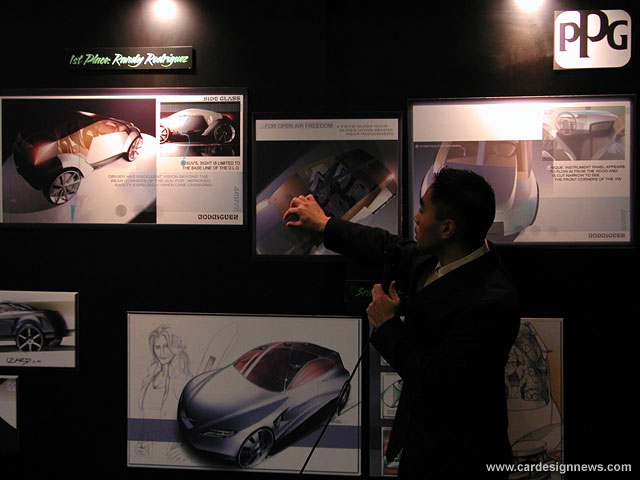 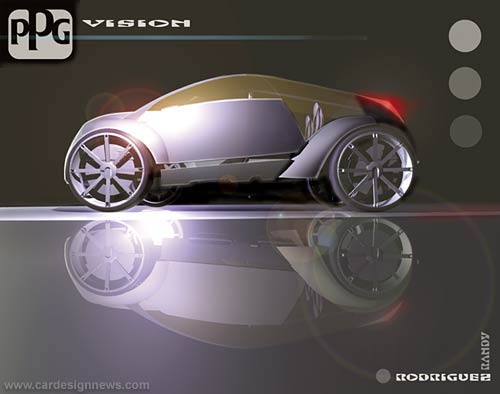 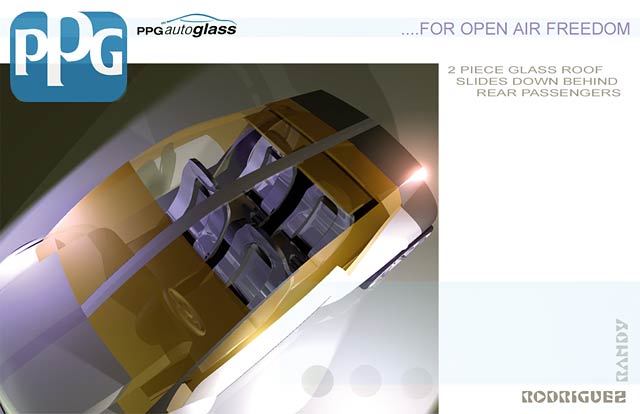 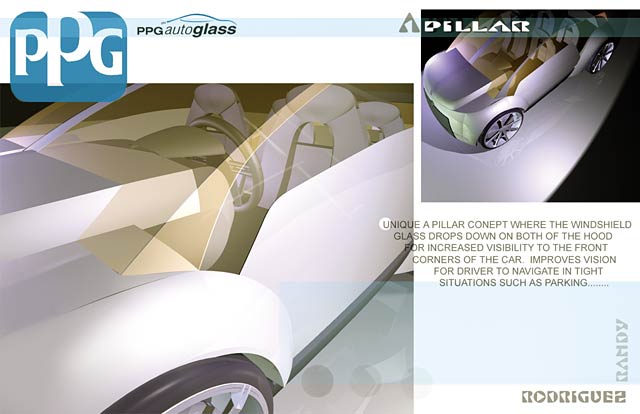 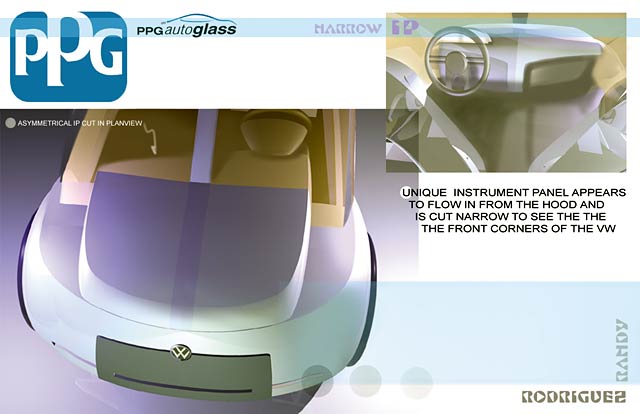 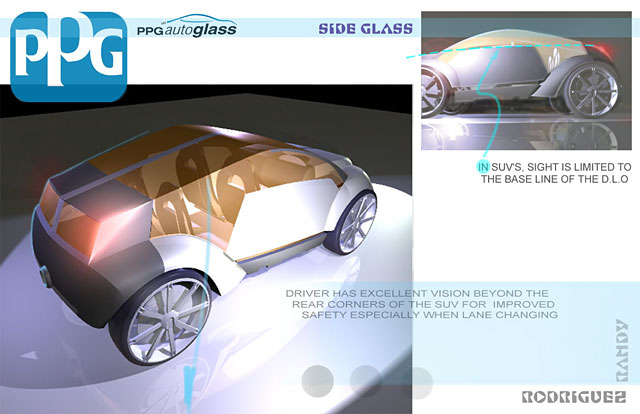 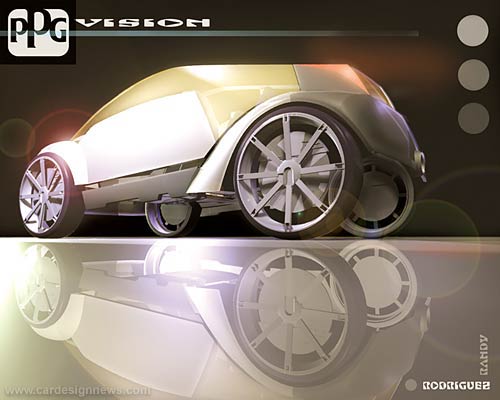 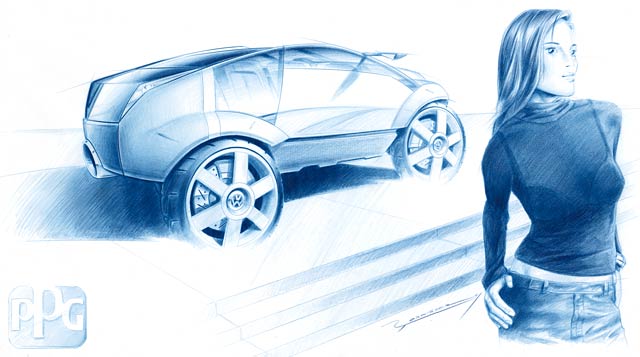 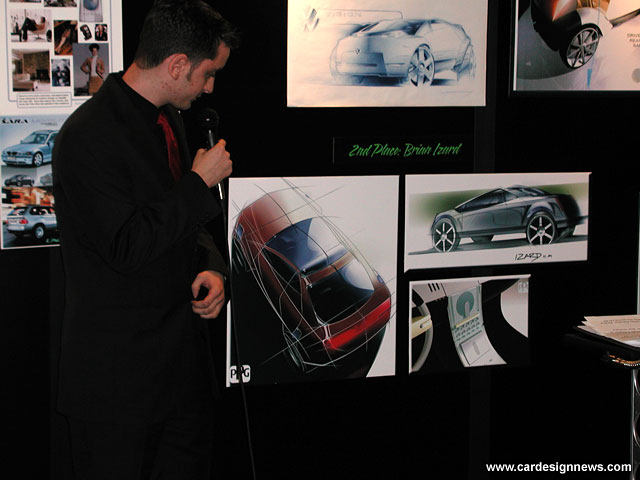 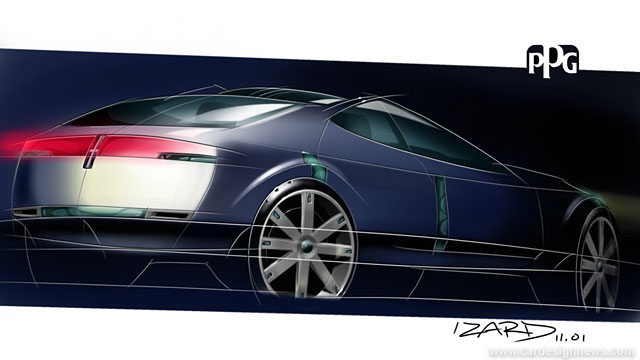 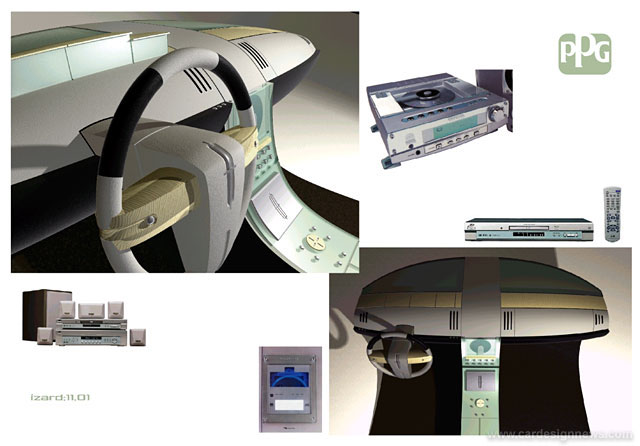 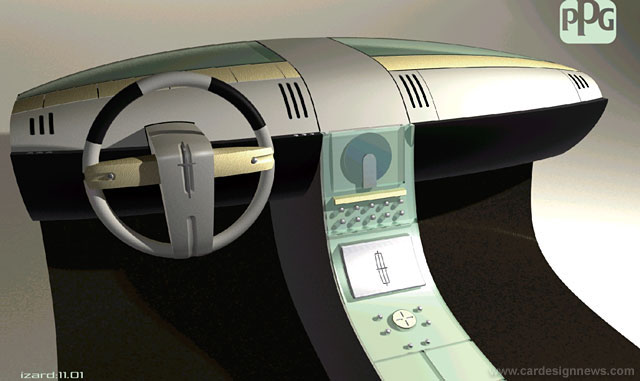 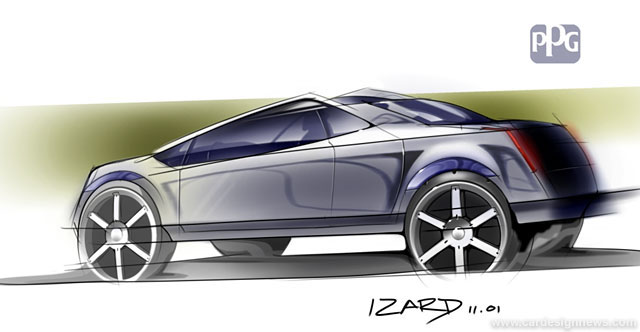 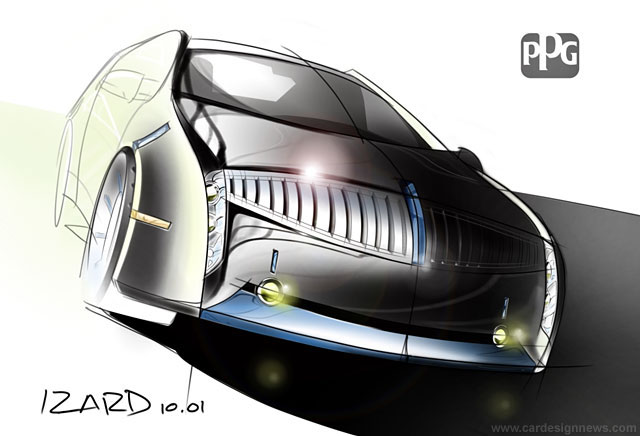 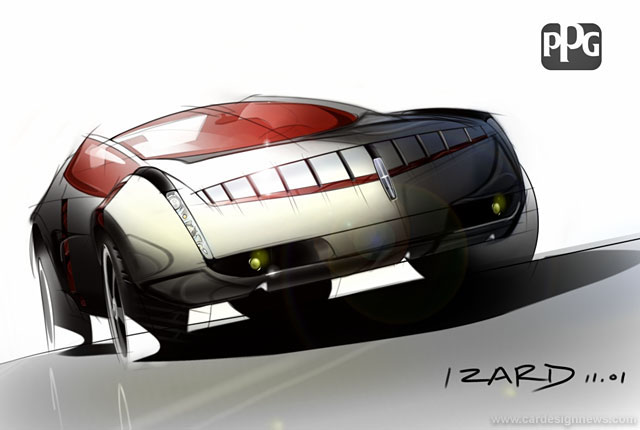 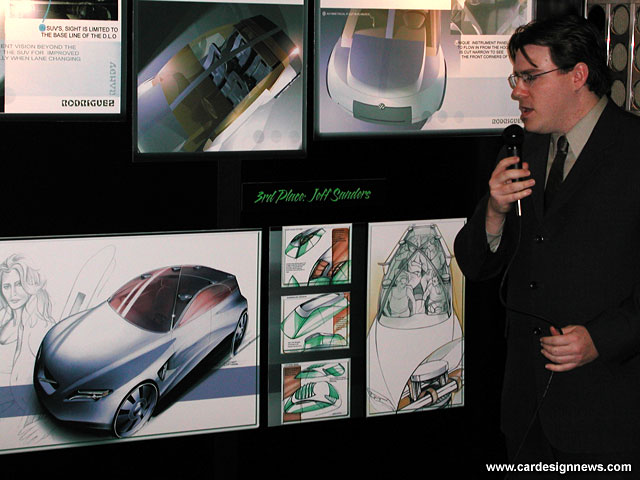 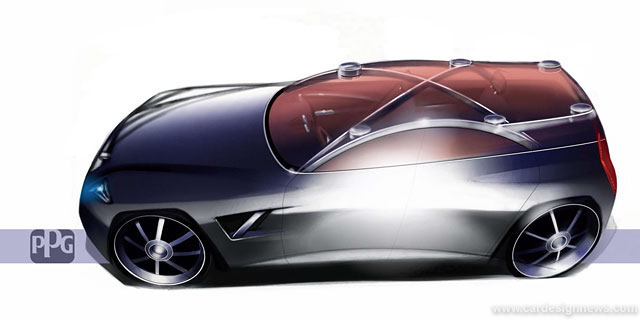 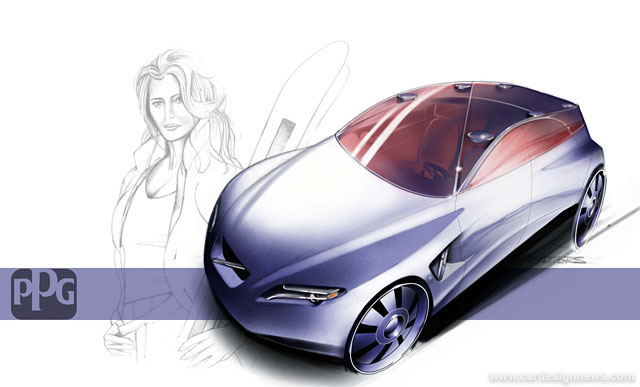 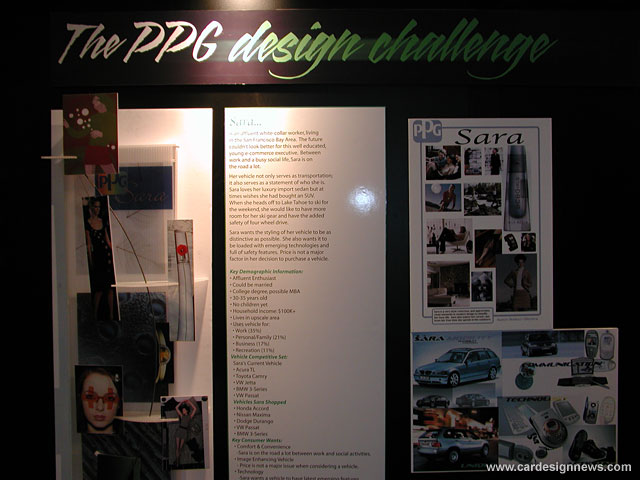 The project brief was based around a theoretical San Francisco based consumer named Sara, defined by J.D. Power 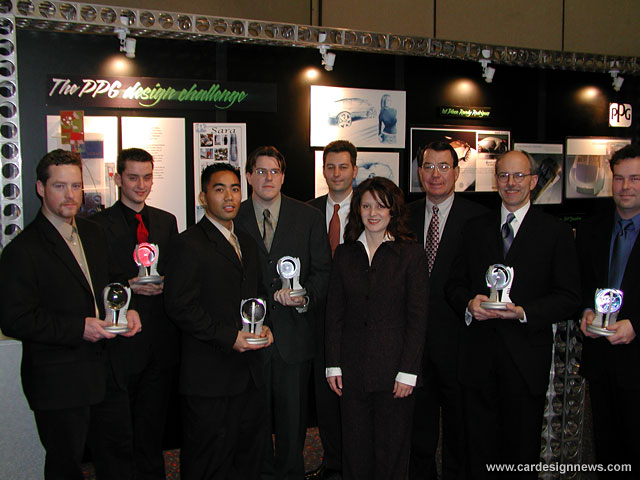 Mar 13, 2002 - In a recent competition sponsored by Pittsburgh-based glassmaker PPG Industries, winning designs by students of Detroit's College for Creative Studies showed how glass can add safety and security as well as utility, comfort and convenience for a luxury 2008 vehicle.

While dark glass on today's vehicles provides passenger privacy and symbolizes status, tomorrow's automotive designers see glass tops, spanning from the windshield across the roof to the back window, on luxury vehicles so that occupants can see and be seen.

Hahn presented the awards during ceremonies at the North American International Auto Show in Detroit, on January 9, 2002. The students received scholarships of $1,500 for first place, $1,000 for second place and $500 for third place.

Randy Rodriguez's first-place design is for a car-like crossover vehicle that has the ruggedness and versatility of a sport utility, with extensive use of glass above the daylight opening to enhance visibility and, therefore, safety. Each section of the two-piece glass roof can be moved down behind the rear passenger seats.

Instead of the windshield having the traditional curved, framed shape, sections on both sides at the A-pillar step down below the main base, dropping onto a narrowed, carved-out hood. This allows the driver to see the front corners of the vehicle.

In place of the traditional rear side door, glass extends from the roof to the rear fender, forming a 'V' with the fender and front door, to enhance the drivers ability to see out, while allowing rear seat passengers to have unobstructed views of the road.

An aluminium center bar from the hood to the trunk adds structural integrity. The two pieces of the glass roof are separated by the bar, and can be moved on the center pillar behind the rear passenger seats, resembling a T-top.

A glass strip along the lower body side can be illuminated to improve safety, acting as a large side marker light to make the vehicle more visible to other drivers. A running board flips down to act as a step, and the glass luminosity intensifies and acts as a puddle light, illuminating the ground for passengers stepping in and out of the vehicle.

The asymmetrical instrument panel seems to be an extension of the hood that appears to flow inside the cabin. The instrument panel cuts across diagonally and narrows on the passenger side to afford the driver a better view.

Expecting life in 2008 to be busier with more traffic, Rodriguez said he designed his vehicle to allow the driver to see the road better for dramatically improved safety.

Rodriguez described the project as "extremely challenging because it was much more than a styling exercise," with his search to find unique glass concepts resulting in "new shapes and functions."

Brian Izard's second-place design is for an elegant, luxurious vehicle that combines the sportiness of a sport utility with the cargo storage and flexibility of a hatchback.

Izard shows how glass in vibrant colors can be used to create visual excitement and complement body paint, focusing on the beauty and clean lines of the material

Inspired by the stained glass windows of cathedrals, Izard selects bright colors of glass, allowing it to be used as decoration with different shades of body paint - wine red glass with a black body, purple glass with a red body, aquamarine glass with a blue body, ochre glass with a cerulean blue body. A glass roof creates an open, airy feeling for the passenger compartment.

Izard added visual interest with splashes of brightly colored glass above the wheels in vertical or curved horizontal insets, and vertically along the door trim

By replacing chrome and other bright materials with glass where "practical and feasible," Izard says he "presents a visual depth and interest to the exterior and interior of the vehicle."

Inside his concept vehicle, for example, a frosted green glass center console creates visual depth. The glass has a plane surface, and the underlying material is visible, creating a dynamic play of surfaces.

Izard wanted his use of glass to be "practical and feasible, nore production oriented" so he chose to keep the lines and functionality of the glass consistent and simple. He says he found the competition enjoyable because it allowed him to learn the use of a new material. "This project forced me to challenge the conventions of how glass is customarily utilized in automobiles. It added a new material to my toolbox of design."

Jeff Sanders' third-place design is for a four-door station wagon-type vehicle with glass forming the entire top above the daylight opening. A single piece of glass comprises the windshield and elongated roof, supported by a crisscrossing polished aluminum frame that extends from the cowl exhaust outlets to form the A-pillars and curves down behind the back door.

Sanders met the design challenge for glass to add safety and security by affording enhanced visibility. "The idea was to make the occupant highly visible, as an image car, while improving safety with better visibility," said Sanders.

Six dome shaped cylinders adjoin the frame to "add interest like jewellery or ornamentation," with four of them holding airbags. "the main purpose of my glass design was to incorporate overhead airbag packaging in the design," Sanders said. "I wanted the side impact airbag to be the focal point as a design element and a safety visual cue. The cylinders also house an overhaed sound system.

With the crossing framework, a multitude of overhead storage options is possible, meeting the challenge for utility. For example, an overhead screen can be added to provide shade as well as storage areas. A glass sunroof can be installedwith individual louvers that can be opened.

Twenty-five transportation design seniors submitted concepts. To prepare them for the contest, PPG glass and coatings experts provided the students with information about glass manufacturing and design and color trends. They also heard from Amy McFarren, senior manager, J.D. Power and Associates. The concepts were based on a targeted consumer defined by J.D. Power: an affluent e-commerce executive named Sara, 30 to 35 years old, living in the San Francisco area whose vehicle is a statement of who she is.

Designs were judged on appropriateness and creativity, the students' sketch work and idea generation, and professionalism of the students' presentations before the judges.

PPG is North America's largest manufacturer of automotive glass for original-equipment and replacement applications, and the world's leading maker of transportation coatings. The company has been an official sponsor of the North American International Auto Show for eight years.

Located in downtown Detroit's Cultural Center, the College for Creative Studies is one of the leading arts education institutions in the USA, and has one of the world’s most recognized and respected transportation design programs.

The course benefits from close ties with manufacturers and their major suppliers. The award-winning faculty is drawn from both academe and industry to provide students with a balance of theory and practical application. Many of the Transportation Design teachers are practising automotive designers from the Detroit-based car makers.