Behind the door of an anonymous-looking industrial building in south Manchester, northern England, a guy called Dennis Platt is carefully examining a massive two-metre steel roller spinning at great speed. Surrounded by dark metallic machinery that requires grease and patience in equal measure – and which in some cases has been there for half a century or more – the work is exacting and the environment decidedly mechanical.

Through the microscope he’s studying the texture of the engraving that’s slowly being created – due to the pressure of the much smaller roller just above his head pressing down – to make sure the pattern repeats perfectly as the little roller moves along the bigger roller’s length, so the latter can ultimately be used to create various textures without seam or join showing.

When we visit, Dennis is working on the imprint for an engraving for a humble toilet tissue product, but in his 46-year career as a master engraver he and his team have worked on huge parts for Rolls-Royce aircraft, material for a supplier to luxury luggage legend Louis Vuitton, the gently textured foil on yoghurt pot tops as well as developing lots of finishes for automotive materials too. 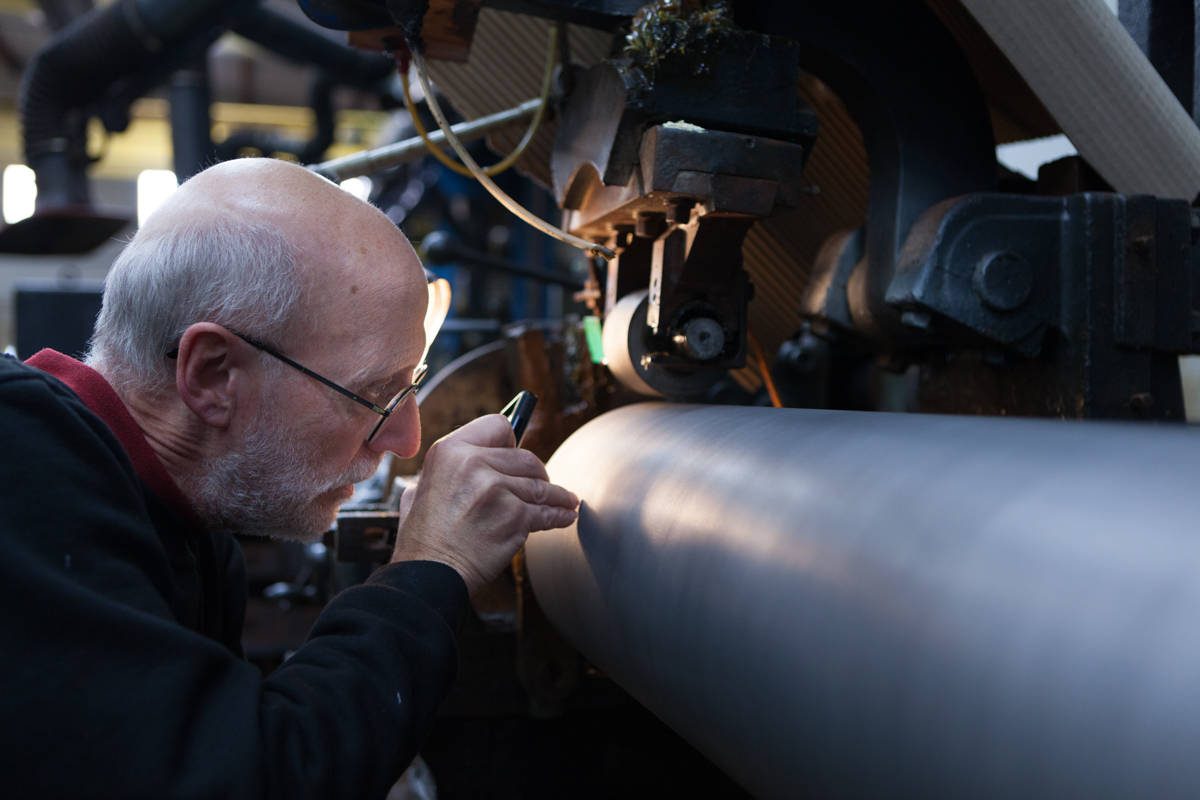 With depths of pattern and design between two thousandths of an inch to 50 thousandths (or 100 microns), his sharp eyes and skill make him a crucial part of the global Standex Engraving business. If it’s good enough for Louis Vuitton, it’s probably good enough for JLR.

In stark contrast, just a couple of doors and rooms away, young graphic designers Winnie Yim and Lauren Murphy sit in a smart white office space surrounded by prototypes for car surfaces, busy designing textures on a computer. Once happy with their designs, they are converted to bit map files and sent to a much more modern-looking roller, which is wrapped in paper and connected to a computer-controlled Rapid Prototyping Machine (RTP). This ultra-high resolution 3D printing machine – 3600 dots per square inch – then fires out tiny dots of a clever (and secret) material at the paper in cumulative layers to build up a texture, a bit like a very subtle 3D printer.

This layered design “in positive”, is then cast in a silicon mould from the print before Standex makes its textured Model-Tech skins from that mould to wrap around all manner of car interior surfaces (and a few special editions of this book).

This is the varied and complex world of Standex Engraving and its design consultancy Architexture, which its studio head of design Mike Miller sums up perfectly: “It’s where heavy engineering meets flower arranging.”

We’re in Standex’s Manchester-based Architexture studio to collaborate on a few designs and techniques the firm is helping us with to gain an embossed pattern for the cover of our latest yearbook – which is available now. It’s been a challenge, because due to the time and cost constraints of our process and print deadline, we’ve had to ask the Standex team to work with a Winter & Co book binding material rather than an automotive one they’re more used to. 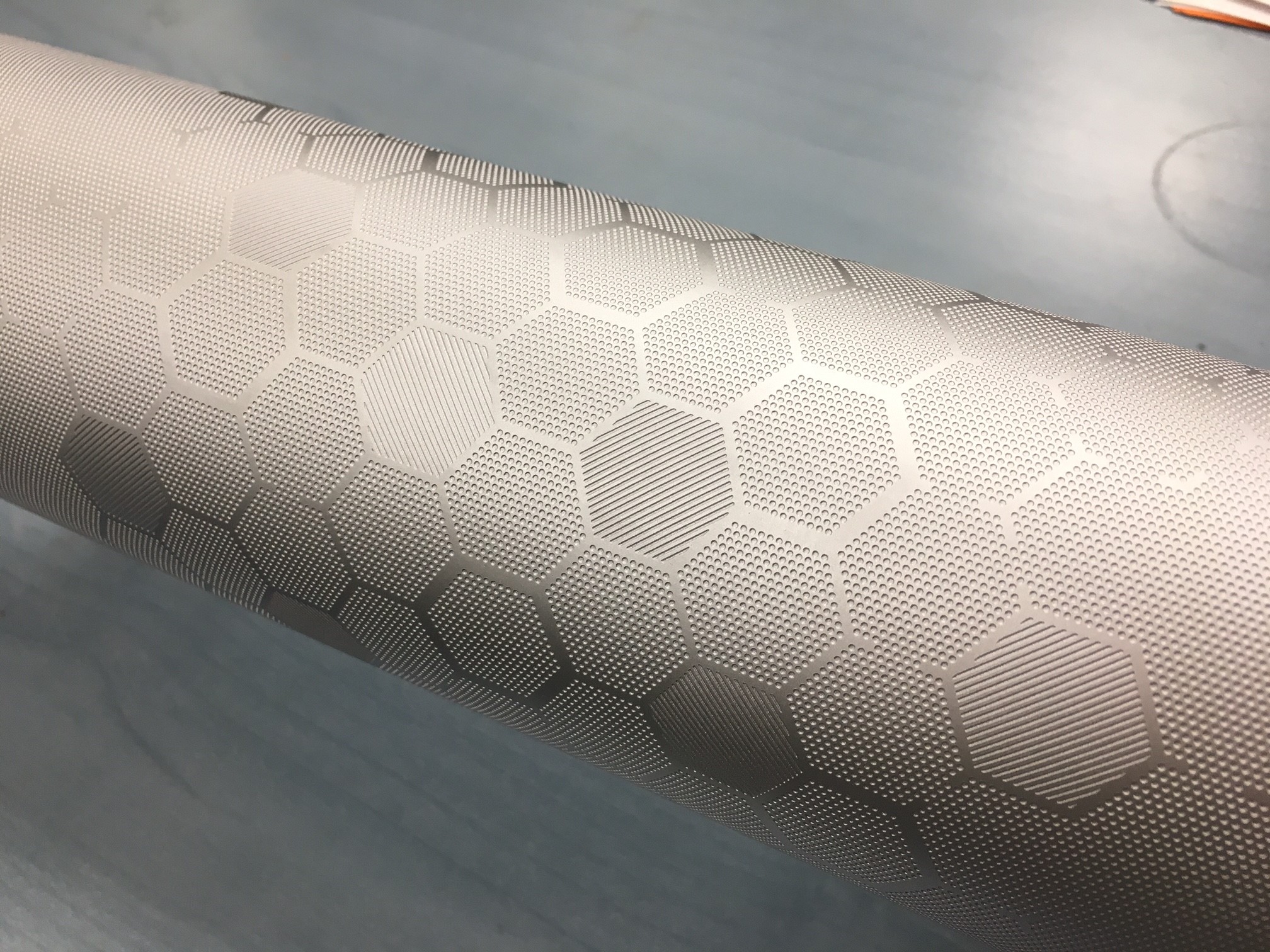 Once we agree on the design made by Winnie and Lauren, it’s fed through to Standex’s proprietary 3D printing machine from which a chemically-etched “negative” pattern is created on a metal roller that will then be pressed into our cover paper to form our “positive” cover artwork. But before that can happen, the foot-wide steel roller is physically transferred a few hours’ drive south to Winter’s Cambridge printing facility, used to test the paper, before that embossed batch is sent on to Diamond Print Services in Enfield, north London, for binding to the cover and the pages within.

Miller can talk for England about the various processes and procedures that the company he works for excels at, and is visibly proud to be part of a craft-based tradition that extends well beyond his colleague Dennis’s long career. An engraving found on a sea shell in Java thought to be half a million years old is one of the earliest known examples and a hand-engraved roller in soap stone that celebrated the Persian king Cyrus’s victory over Babylon in 5th century BC (and now sits in the British Museum) is another.

“You could argue it was the world’s first production roller,” Miller enthuses, “it was engraved, rolled into a material which was embossed and then used as a communication tool around the kingdom so everyone got the same message. That story resonates with what we do with our production rollers.”

Warming to the subject, Miller continues: “The Gutenberg printing press of circa 1440 allowed The Bible to be printed because they wanted everybody in Christendom to sing from the same hymn sheet. This is the cultural history of engraving. What then became interesting was the progression from print rollers to wallpaper rollers producing all these different aesthetics, but at the same time – because of the limitations of the production process – it became enormously expensive to produce new textures so the same textures were being reused and reinvented constantly. 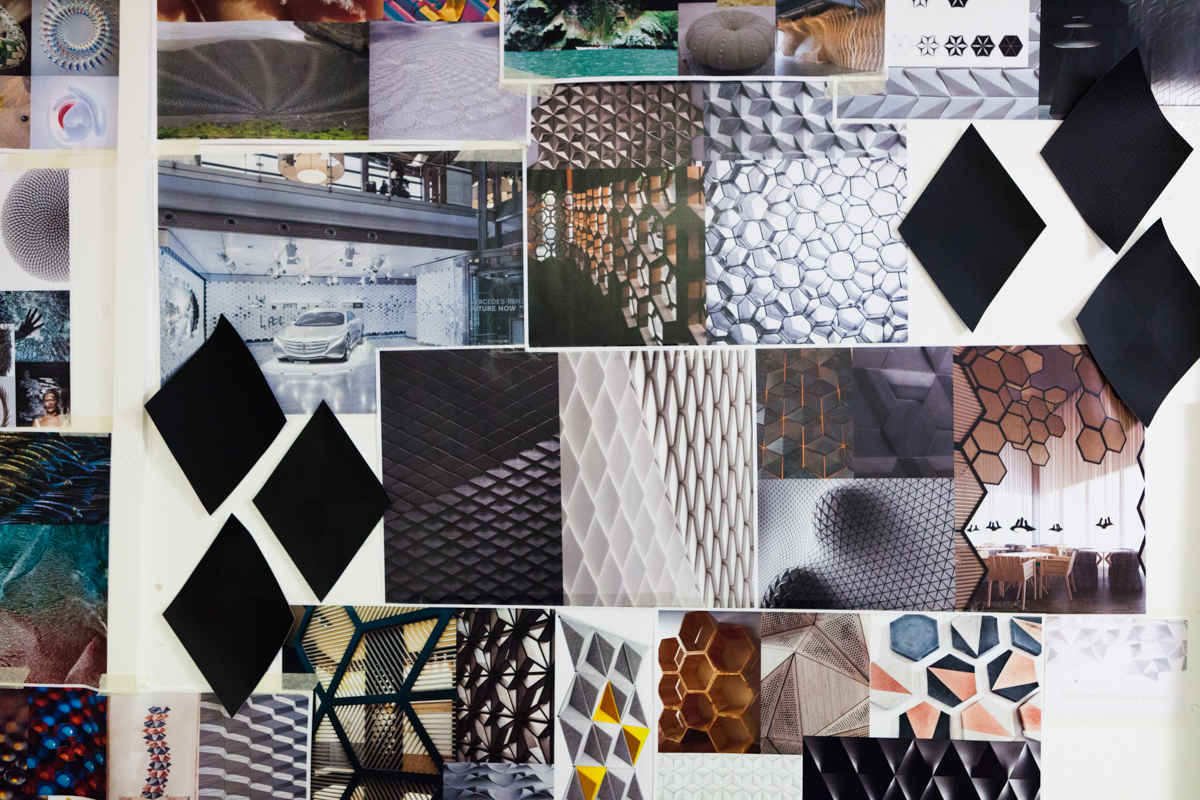 Texture ideas for our cover produced in the UK design studio.

Miller explains: “Until the development of systems like Architexture, within the car industry there was little choice. Colour and material designers became ‘choosers’ rather than ‘creative designers’. They couldn’t create something new because it was too expensive. But with our RTP machine we can print 100 completely different textures simultaneously. That would take you a couple of years using conventional technology. Architexture gives people the opportunity to create different design textures, see them through to the verification process and gives them the confidence to then start thinking, ‘maybe we can use texture in a much more expressive, artistic and cultural way’. For me, nirvana would be individual car companies starting to use the opportunity that Architexture gives them on texture as an expressive tool in line with their particular design DNAs.”

Miller explains that Architexture can offer chemical etching – “which has the benefit of being able to be carried out globally and is relatively inexpensive in terms of plant and equipment but is reliant on the craft skill of the technician”. But he appears even more excited by the firm’s laser etching ability, “because it gives you the capability of manipulating the textured surface in an x, y and z position, on the tool. And you can engrave one micron at a time. It’s more expensive but aesthetically it’s potentially going to cause a massive expansion in what’s actually engraved onto surfaces.”

The firm’s capability is usefully global too. Standex Engraving has 37 plants across the world. “Standex is an enabling company,” clarifies Miller. “We don’t actually make anything other than prototypes, but through that process we enable the carmakers to do something new. The beauty of Standex is that because we have all these plants around the world, we can do a programme for a carmaker even though it’s being made in different parts of the world and still guarantee consistency.” And through its design consultancy Architexture, it boasts creative studios in Manchester, UK, where Miller works, Detroit, USA – headed up by chief designer Lilana Nicoghosian – and Shanghai China – where Charlene Zhou and Cole Chen lead the design team. 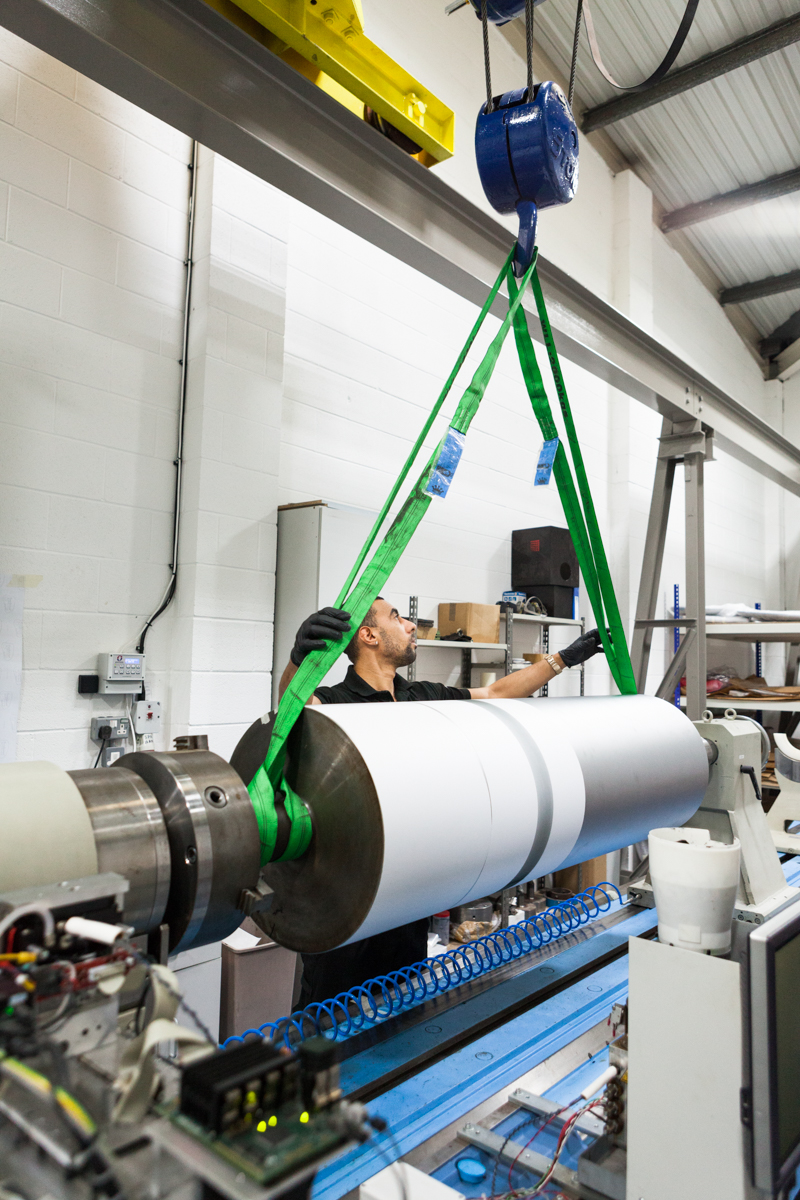 Another roller is winched into place by Duane Smith

This gives the firm a chance to work in near-term and future-facing ways. “There are two parallel streams,” explains Miller. “You have production work which is always going to be relatively conservative, and show cars and advanced design stuff. The idea with Architexture is that we can facilitate both. We’re working on numerous production programmes at the moment. We’ve designed new grains, stuff that has been etched, rollers that have been made and material produced. And at the same time we are working on some advanced design projects where the concept of the grain is so far away from any conservative precursor, it’s rocket science.”

Our cover is much simpler than that, sporting a design that reflects the ongoing automotive trend of hexagonal motifs on both interiors and exteriors – including the Renault Trezor concept and numerous others in 2016. Nonetheless, we hope this story helps create a little understanding of how our book cover’s look and feel was created, through skills honed for decades and built upon noble traditions that stretch back three millennia, or more.

Car Design Review 4 contains the best concept and production cars of the year, as chosen by the world's leading designers, trends, student work, and much more. And it's available now.