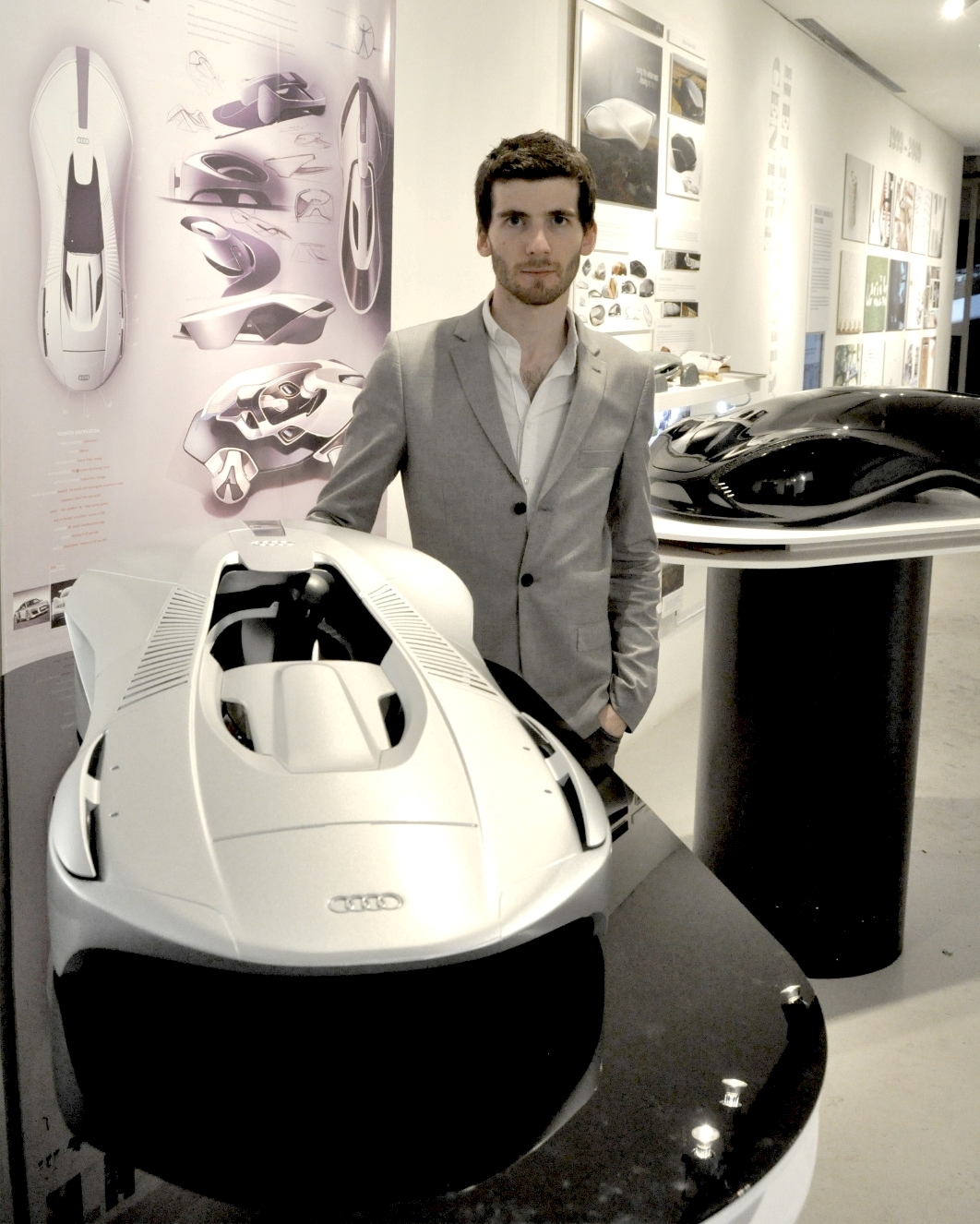 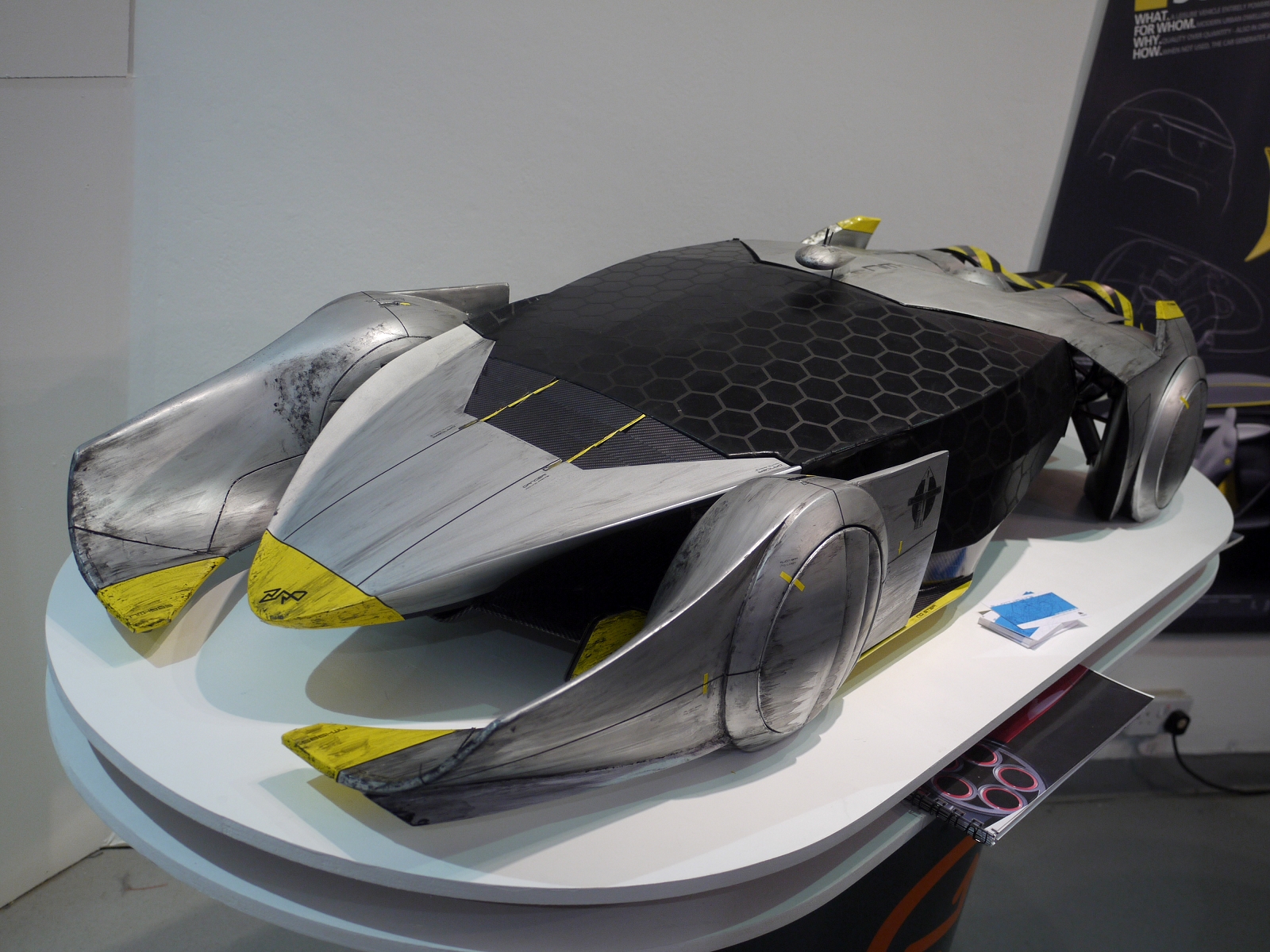 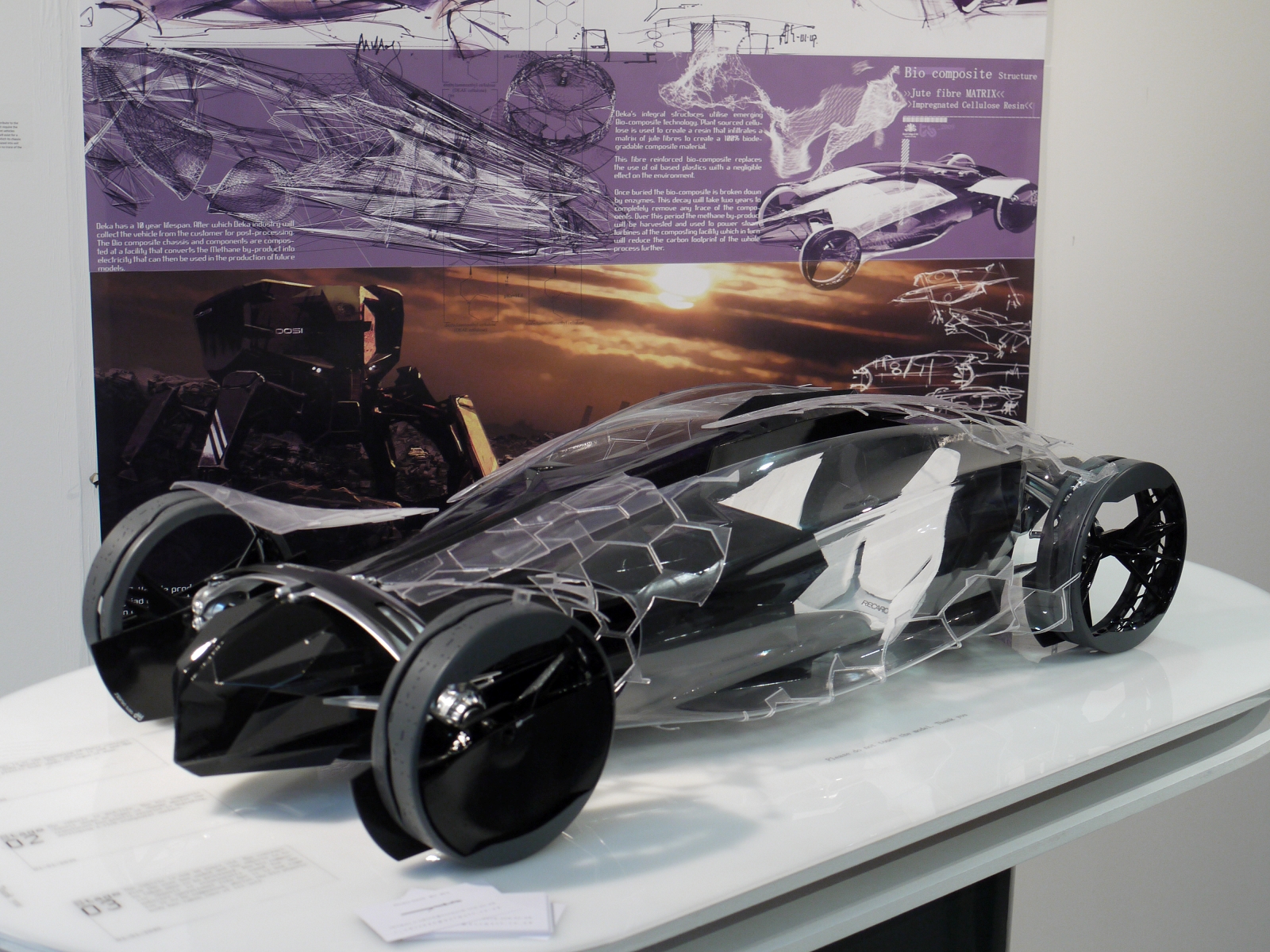 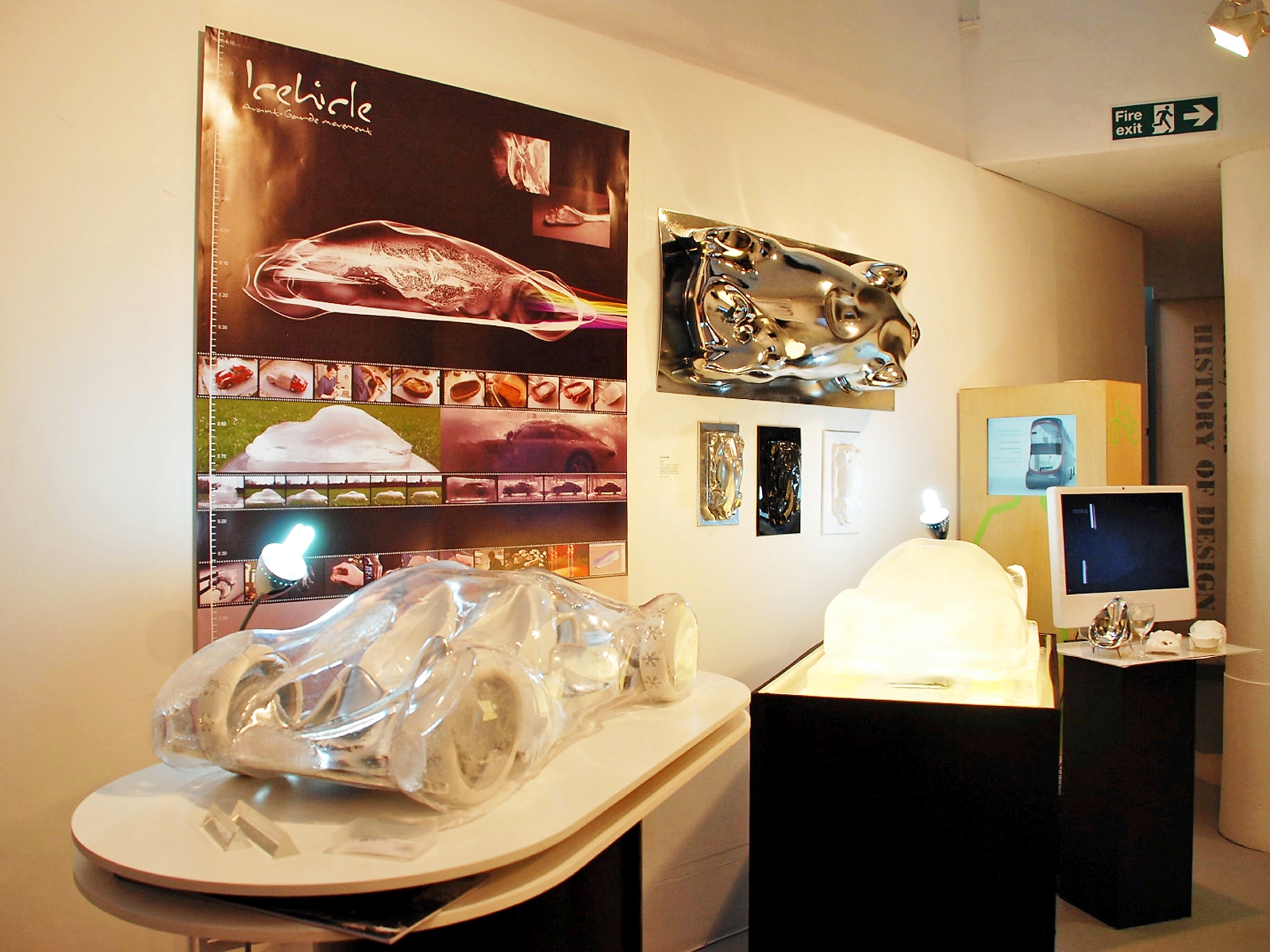 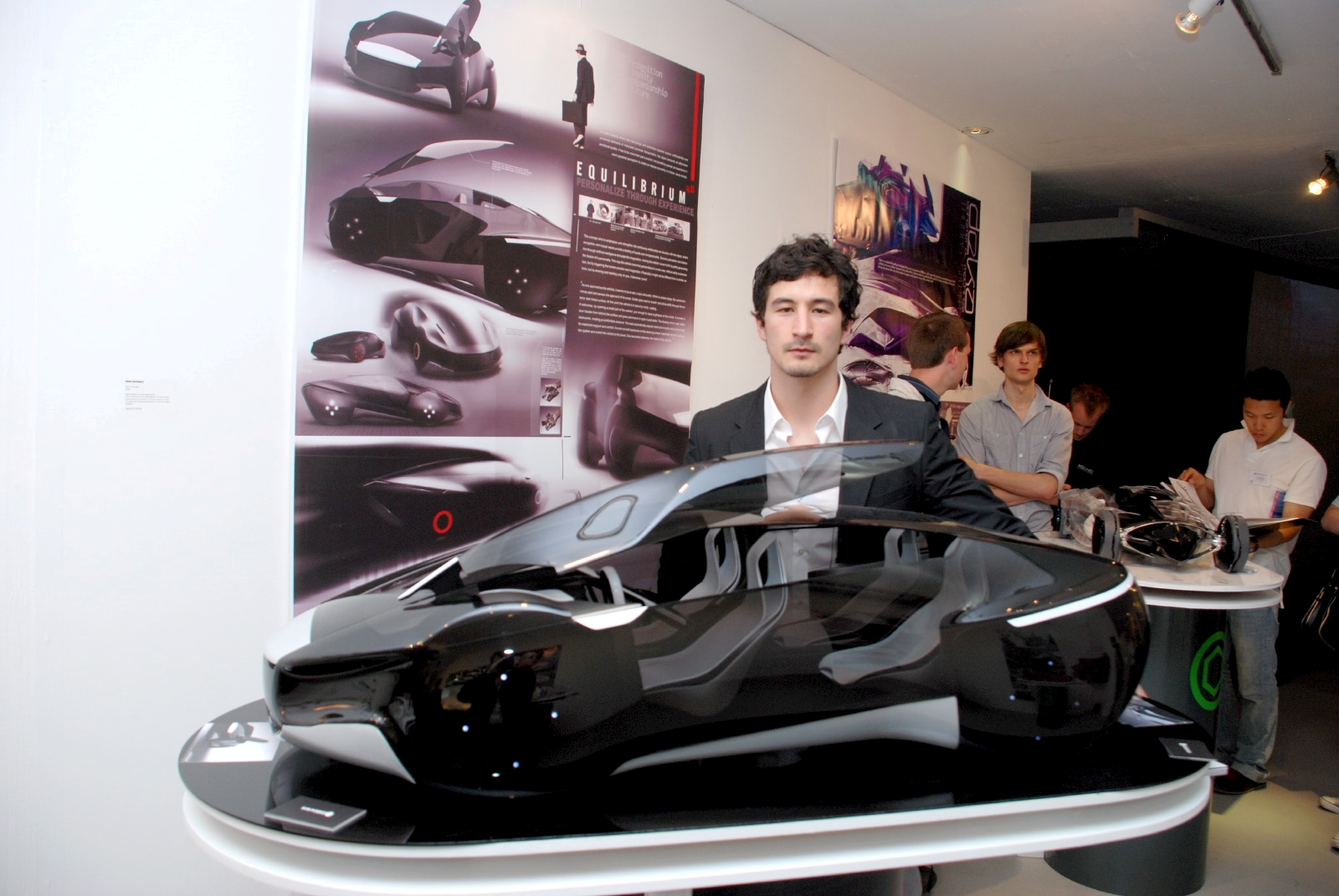 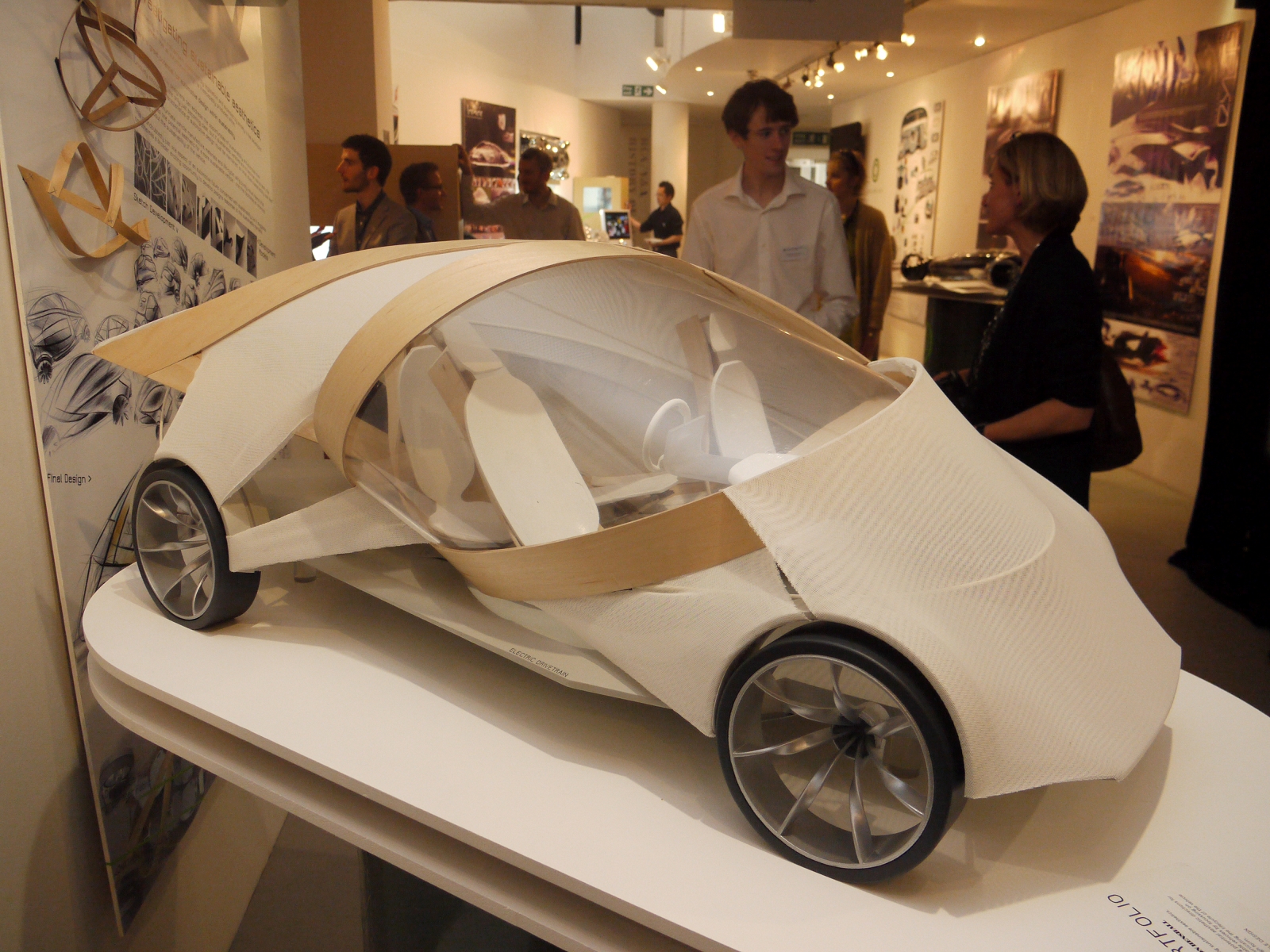 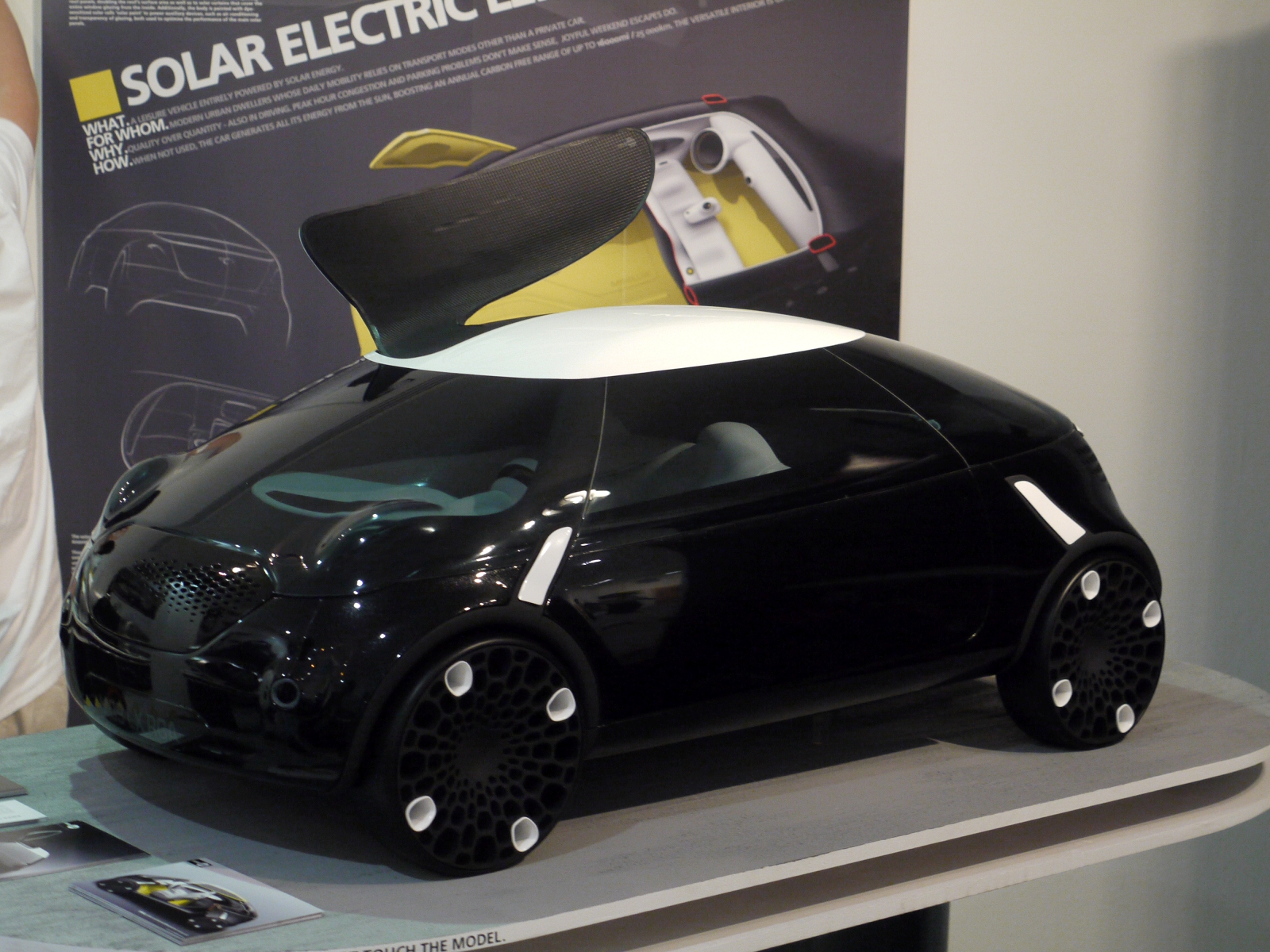 Audi Exo-line
Andrea Mocellin
The Exo-line is a new vision for a human-powered vehicle for use on alternative landscapes. Inspired by skateboards and gravity racing cars, the concept features exoskeleton technology and geometric lines - which converge at the center cockpit - to emphasize balance. The vehicle revolves around three core themes: technology, expressed in the form of a robotic system; aesthetics, which is informed by art; and human power, which is exemplified in the minimalist design. Using a synchronized system, the user is fully engaged inside the cockpit - when their body turns the wheels join the movement. An Audi-sponsored project, Exo-line was inspired by the aesthetic of the historic Auto Union Silver Arrow and the Audi Rosemeyer and AVUS concepts. He chose to make the concept an aluminum-bodied vehicle (a thin layer, only 5mm thick surrounds the entire car), which embodies the lightweight DNA of the German brand. 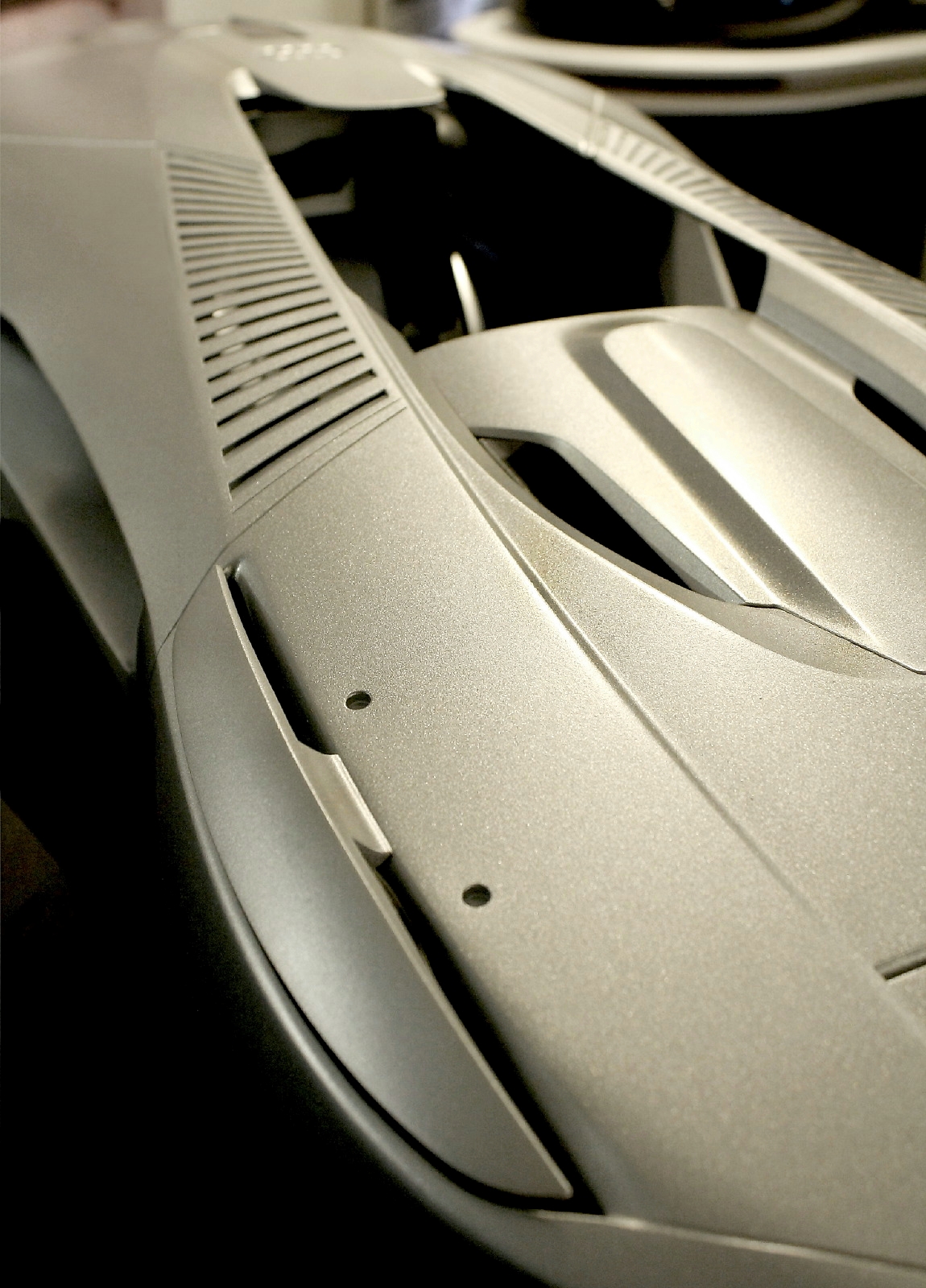 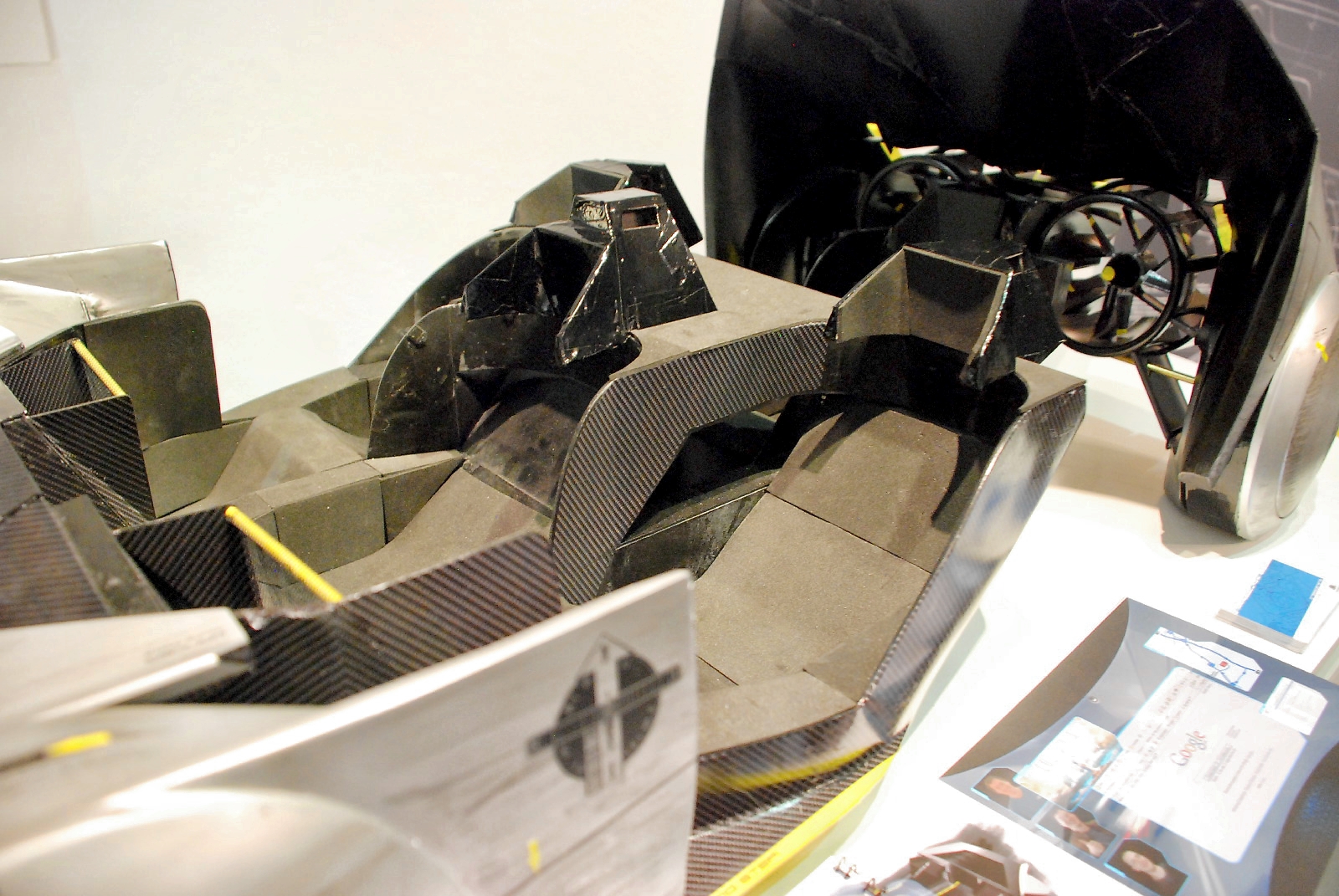 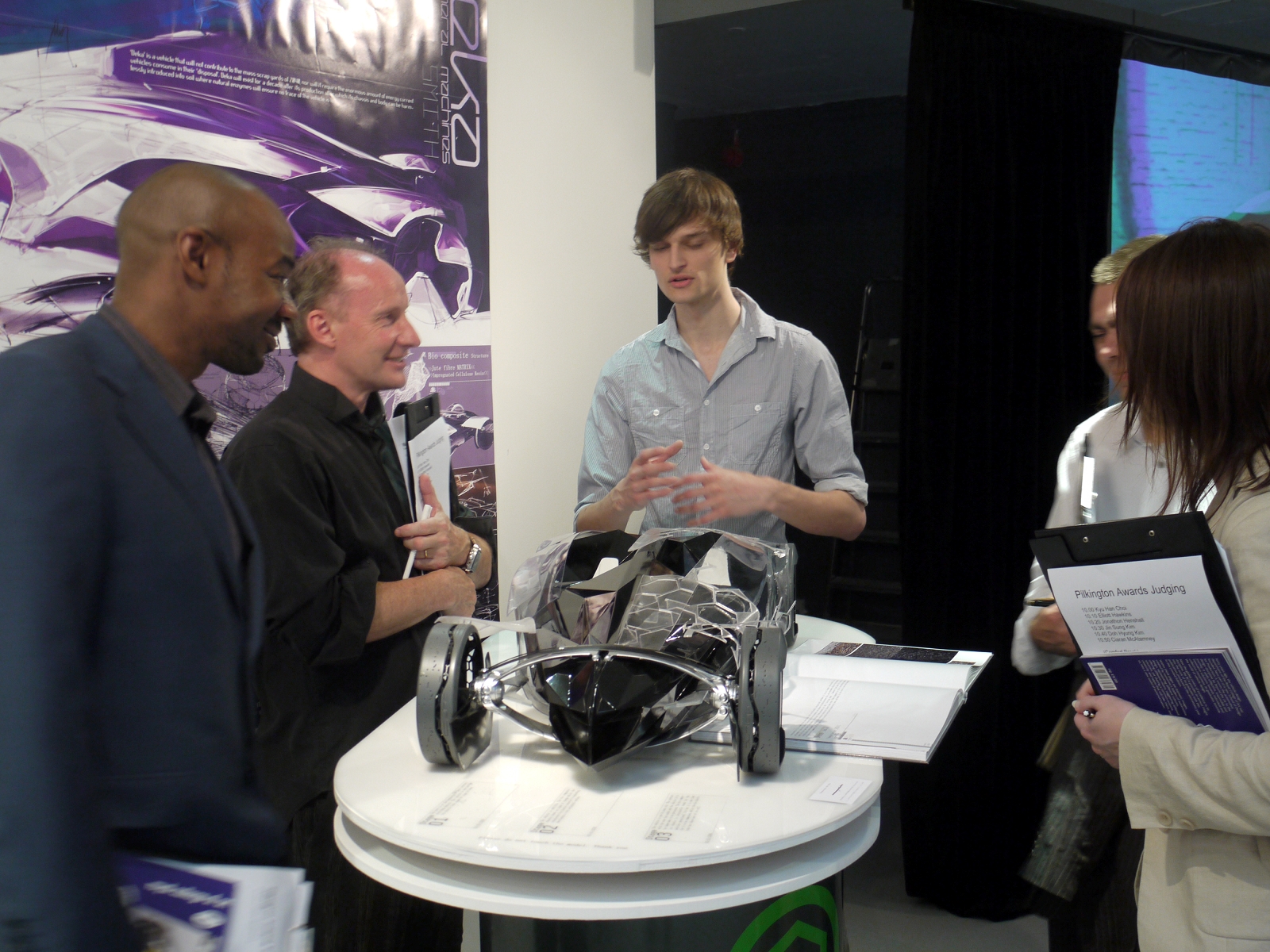 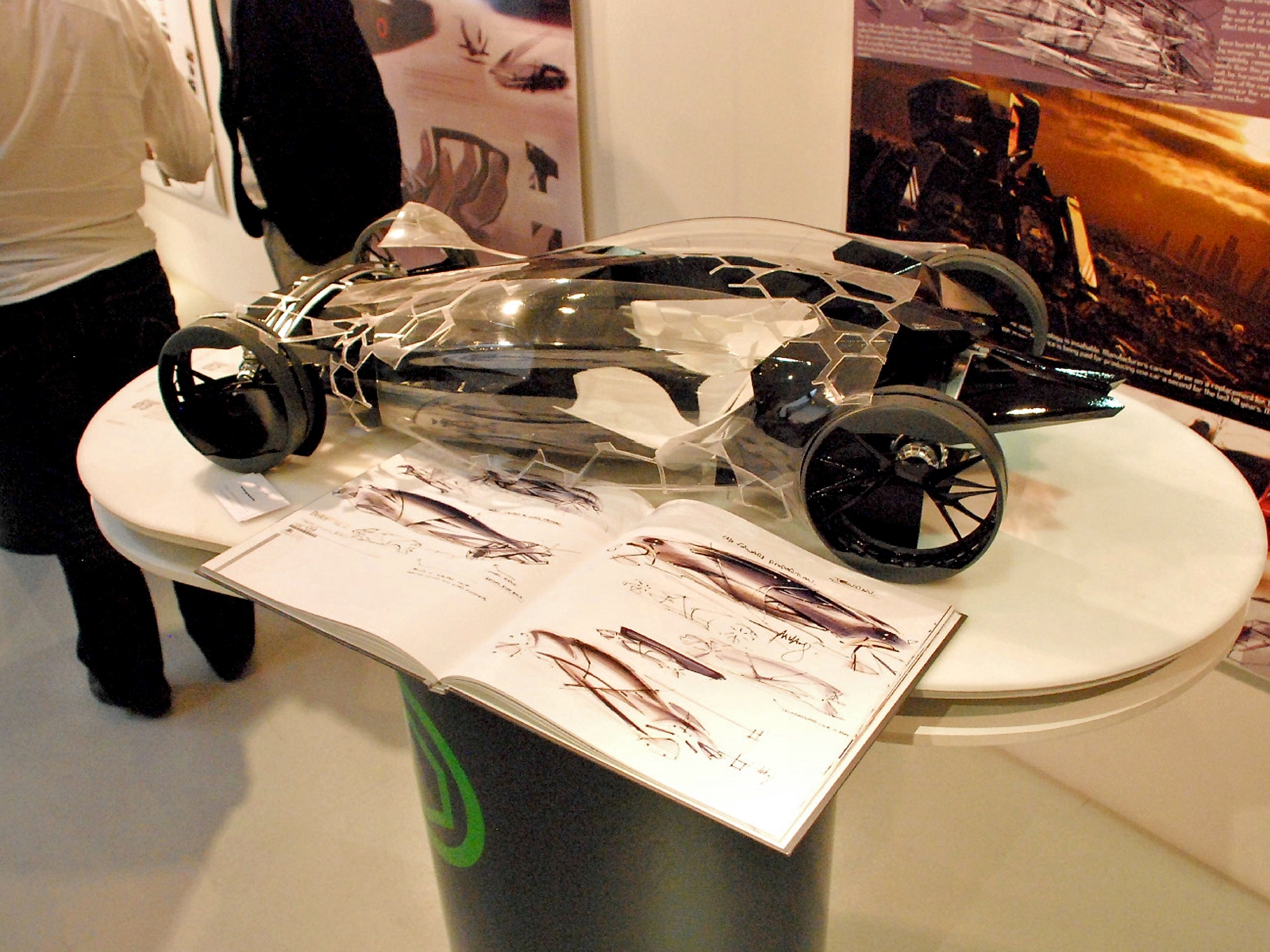 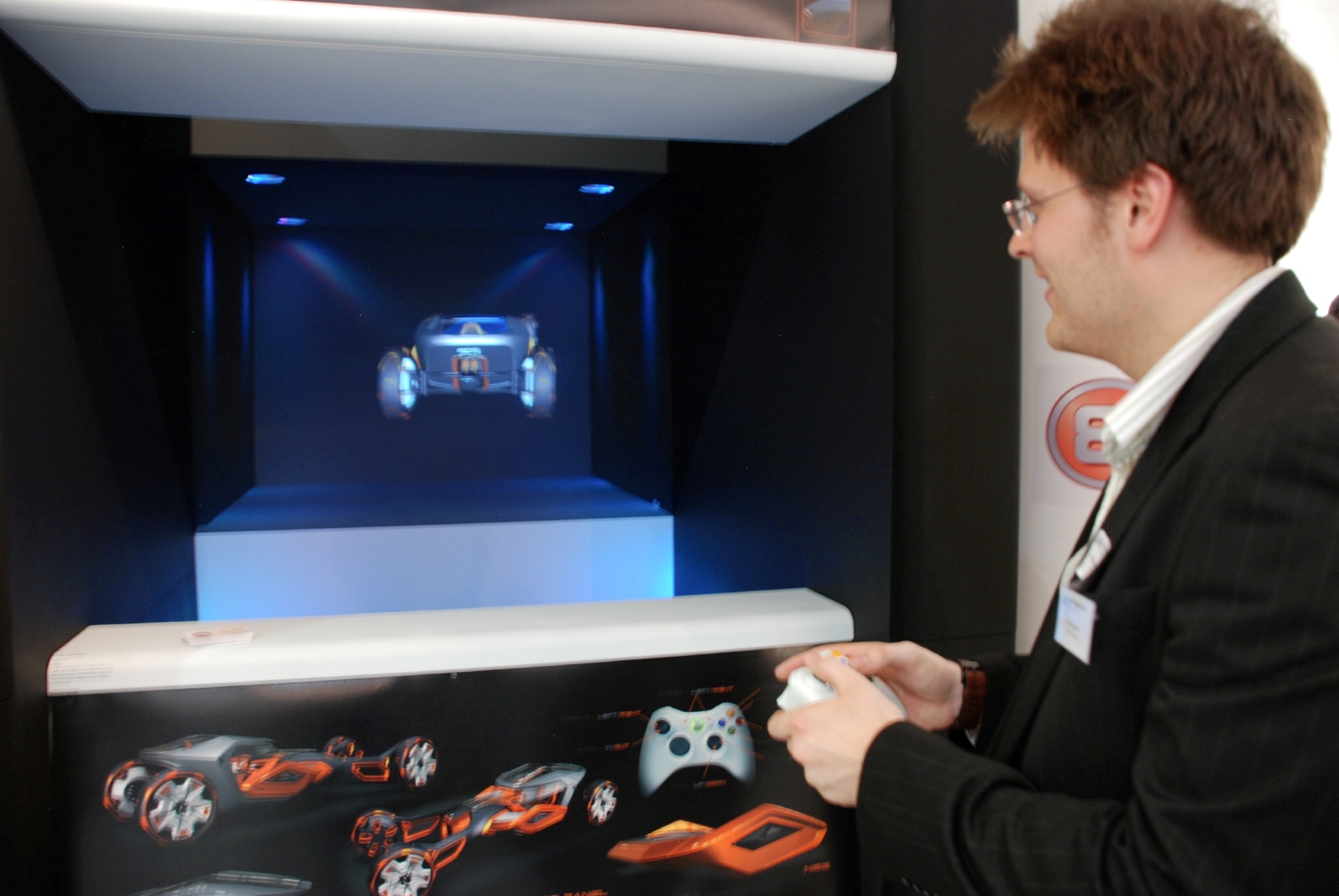 Carl Saunders (above) demonstrates his bespoke ‘Idenion' concept (below) 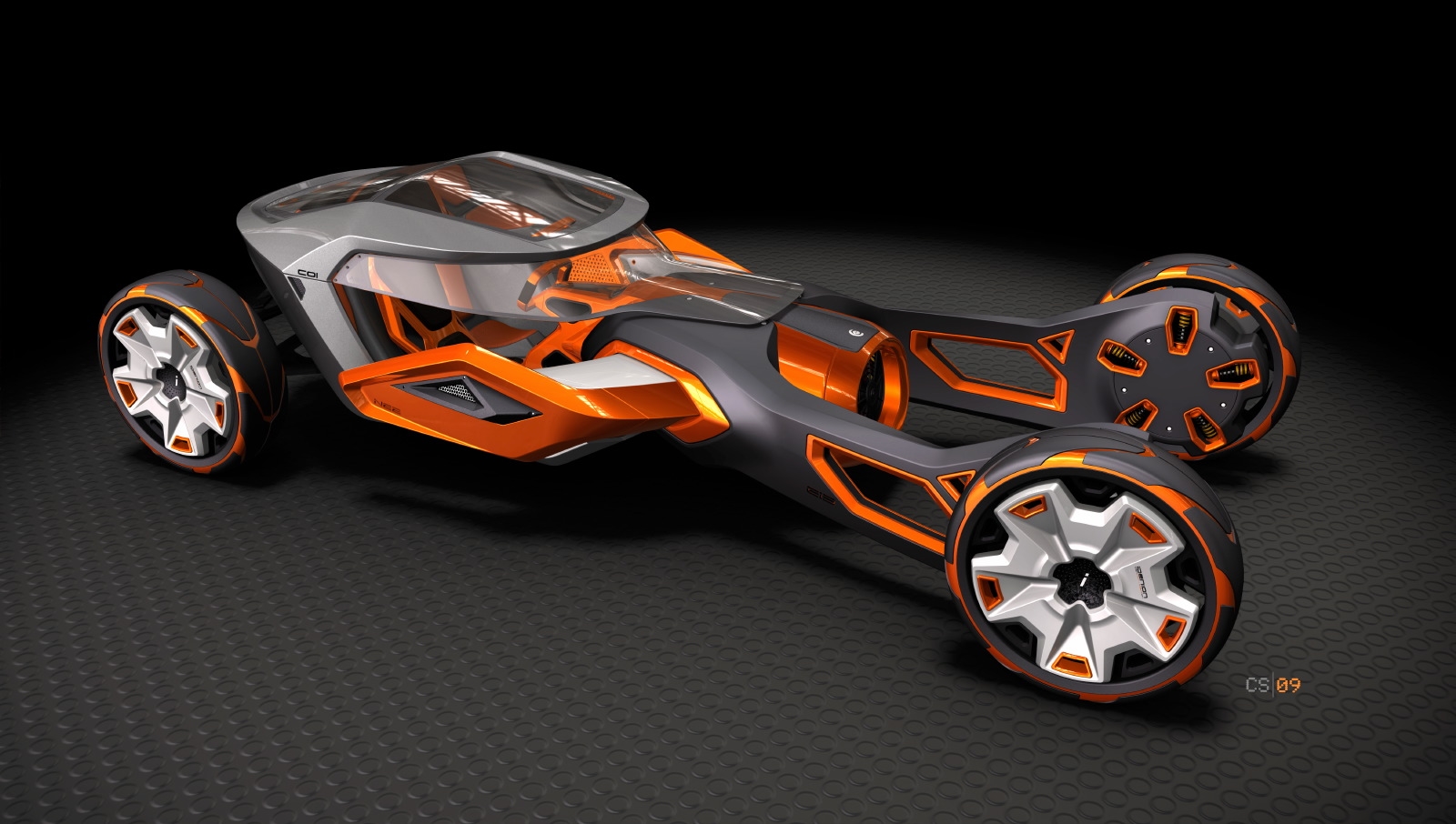 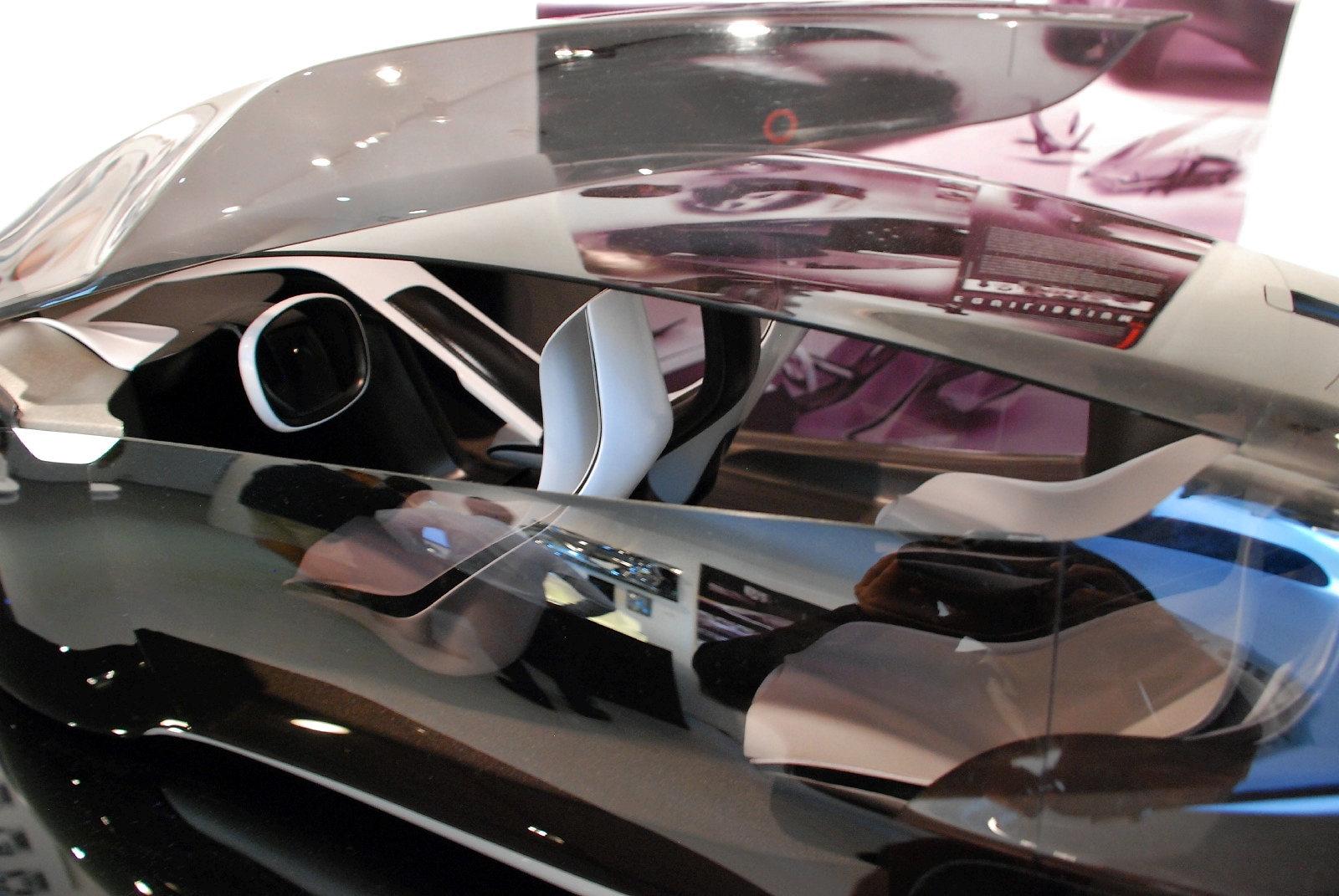 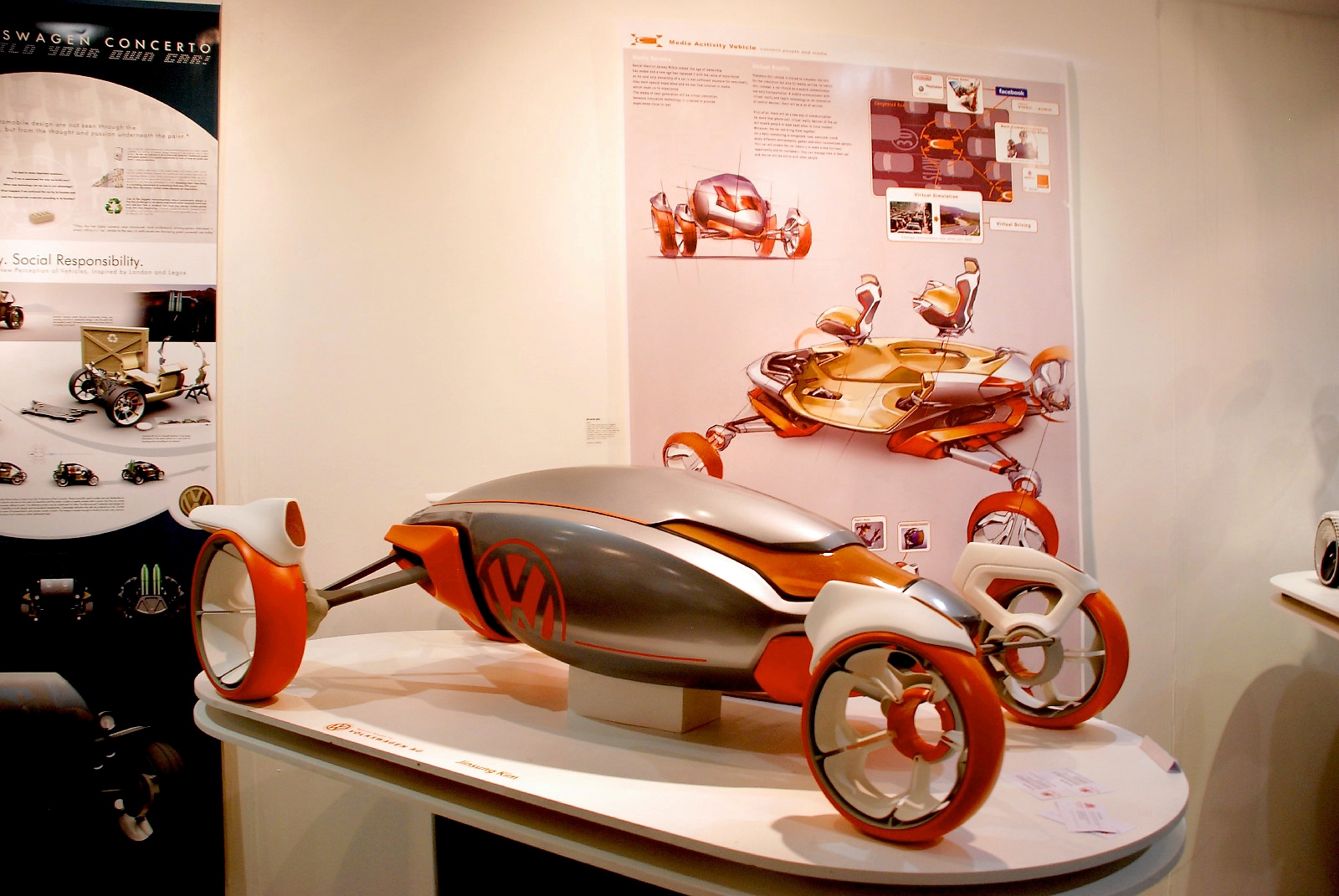 Avro ICV
Elliott Hawkins
Having studied engineering before venturing into design, Hawkins explained that he's always had a preference for engineering-driven products. Wanting aerodynamics to be a key aspect of his AVRO inter-city vehicle project, he devised a 1:18 scale wind tunnel which was powered by a 170mph leaf blower. After having created four noses for the vehicle he picked the most aerodynamic form and used it for the model on display. The lightweight, automated electric vehicle is made to travel long distances.

The minimalist four-passenger 'virtual' interior (which has three staggered mesh seats in front and one at the rear) features wraparound screens around each occupant so they can work, watch movies or gaze at the outside world rapidly going by. Powered by two hub-mounted motors at the front and a turbine at the rear - which recharges the battery pack - the concept also features a roof that is wrapped in solar fabric. "It's an engineered tool you could hammer up the motorway with some patina and character," Hawkins enthused, "like Battersea power station - a bit run down with a bit more soul."

Deka
Thomas Smith
The 'Deka' concept was prompted by the new ‘end of life' directive whereby automakers would be responsible for the disposal of their vehicle at the end of its life cycle. As this government legislation encourages people to treat their cars as disposable objects, Smith proposes a vehicle made from biodegradable plastics that disintegrate over a ten-year timespan, thus giving the car its name.

Intended for commercialization in the year 2030, the vehicle would be offered under contact and have a date stamp printed on the chassis, indicating the vehicle's lifespan. As the car ages it adds a personal element to ownership: "The car ages as a pet would, giving it an organic or human quality," Smith told CDN. "The decay is a positive thing, which could potentially create a brand identity." The faceted center section is made of bio-composite material which is buried in soil when the car reaches the end of its life.

Equilibrium
Bob Romkes
The Equilibrium concept looks at vehicle personalization in a new way, building on the relationship between a car and its user. As the vehicle's owner approaches, a system within the car senses the individual's heartbeat and sets a welcoming sequence in motion: the wheels light up and the door handles appear. The seats, floating on a center frame, slide back to facilitate ingress. Once inside the car, the owner's heartbeat is sensed through the steering wheel and a response takes place. Over time the vehicle adapts to the owner by studying his/her characteristics.

The sleek exterior is made from a rubber-metal material with nanotechnology at its core - materials currently being explored in aviation for use on airplane wings. This artificial muscle enables the car's surfacing to stretch by 300 percent, while also being three times lighter and stronger than metal. It also expands and contracts to steer the wheels of the car via a drive-by-wire system. The technology also reduces the amount of internal components, allowing for a spacious four-passenger cabin, thanks in part to the mechanisms having been moved to the exterior of the car and a front-mounted battery pack powering electric motors in the rear wheels.

Other concepts on display at the show included Ralph Tayler-Webb's 'Halcyon', an aerodynamic two-seater inspired by an owl; the three-seat, individually-tailored 'Idenion' by Carl Saunders; 'Mini Lux', a new interpretation for a solar-powered electric urban vehicle by Jukka Rautiainen; Kyu Han Choi's 'Icehicle', which can best be described as fine art; a vehicle which investigates sustainable aesthetics by Jonathan Henshall; and the 'Media Activity Vehicle' by Jin Sung Kim.