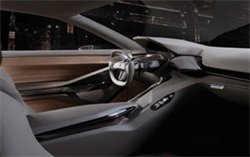 The HX1 features a further evolution of the horizontal, layered 3 interior architecture and very sculptured, 3D surface language previously explored on the company’s SR1 and HX1 concepts. On the transmission tunnel, just above the driver’s armrest, is a discreet touchpad trimmed in matching grey leather milled down to a thickness of just 0.1mm. “There’s no reason why a touchpad today has to be a matte black piece of plastic – you can cover it with anything you want,” says Leenarts. “Instead of having lots of bits and pieces that we have to put into one big bezel, we were able to integrate these elements directly into the leather.” The touchpad operates the foldout screen in the centre console, which is closed in this photo, denoting (along with the rounder steering wheel) that the car is in ‘city’ mode. The matte-silver buttons on the side of the armrest are used to navigate in and out of the infotainment menu.

The way that the concept’s primary functions wrap around the driver will be a key theme inside future Fords. The touchscreens on the Evos feature three-dimensional OLED displays already in use in Samsung mobile phones.

The front seats (shown here in sketch form) were inspired by classic chair designs by Eames and Jacobsen, but still feature modern safety and comfort functions such as the motorcyclist jacket back protection shield-infl uenced ribbed shell, and air- or liquid-fi lled horizontal fi llets inside that can be adjusted according to user preference.

Vercarmodel’s engineers insert the dashboard assembly through the show car’s beetlecarapace-
style, roof-hinged doors during assembly at its facility in Italy. The build process was overseen by Ford’s supervisor for concept design engineering, Patrick Verhee.

Project X81 grew out of the Sportlounge concept of 2005 and is the third model launched under Citroën’s DS sub-brand. These fi rst interior sketches from June 2007 by interior designer Christophe Cayrol explore a new environment which invites the occupants to participate in a voyage where automotive and aeronautical passion are mixed. “The aim was to create an interior as radical as the exterior: simultaneously unique, daring and alluring, and resolutely dynamic with a driver-orientated style,” says design manager Alexandre Malval. “In addition, we wanted to maintain a link to the pure tradition of the most beautiful interiors in the history of Citroën, such as the CX and SM, with their broad surfaces and full volumes.”

The second interior theme was milled in polystyrene in September 2007. This model convinced Citroën management to approve a new direction for the interior and develop a more refi ned hard model in record time for a test clinic in June 2008. “The interior is characterized by the powerful volume of the dashboard, with its asymmetrical instrument façade and high centre console. The façade and the controls have a strong technological character,” points out Malval, before adding, “The dominant central console combining luxury and technology is complemented by the roof console, which appears to be its ‘refl ection’ in the middle of the twin panorama sunroofs.” Both elements contain toggle switches that project the aeronautical theme of the original concept.

FRANKFURT, 14 September 2011:   As the doors closed on the final press day of the Frankfurt Motor Show, design students, media and top professionals from around the globe gathered at the renowned Cocoon Club to watch sponsors Peugeot and Volkswagen announce that the 2011 Interior Motives Student Designer of the Year is Felix Godard, from France’s Strate Collège.

“True genius” was the description of his work by Peugeot Interior Design Director Amko Leenarts. In fact Godard’s futuristic Metis Age concept scored a unanimous victory in the Best Artistic Visualisation category. It then went on to earn its French creator the accolade of overall Student Designer of the Year along with prize money of $5,500.

“It's been a long time since I've seen something so beautiful,” added Ford's Global Director for Interiors, Scott Strong, one of the other judges. “It challenges you to rethink the way we explore design.”

A strong contender for the overall title was Neuron, by Ian Kettle from the UK’s Royal College of Art. His innovative exploration of brain-machine interface technology – winner of the coveted Best Conceptual Interior award – was called “just irresistible” by Citröen’s Head of Advanced Interior Design, Andreas Stump.

Another major hit with the judging panel was Liviu Tudoran’s wildly inventive Fractal concept, whose interior changes shape and colour according to need. It was called “a new interior concept – one that realises maximum complexity in a simple way” by Wolfgang Müller-Pietralla of Volkswagen’s Future Research department.

Other winning entries include RCA student Adam Phillips with his superbly executed Group Dynamics design study, which took a fresh new look at interior ergonomics, and Diet Mini by last year’s Student Designer of the Year Kosin Voravattayagon, which netted its creator the Best Production Interior Award for the second year in a row. Also carrying off individual awards were Julliana Cho’s striking electric commuter car Memory Piece, X-AVR by Michael Canty of the USA’s Academy of Art, and Da Vinci by Marcello Basilio of the Istituto Europeo di Design (IED) in Italy.

This year is the 9th annual Interior Motives Student Design Awards.  For full details of the winners, finalists and shortlisted entries – including images of all the finalists’ work – click here.  A full report of the 2011 awards ceremony is available on Car Design News here.

ABOUT THE AWARDS:  Hundreds of entries from dozens of schools

Design briefs  The theme of the 2011 competition was 'Back to Basics – Making Cars for People, Not Markets', and four briefs were set by Volkswagen and Peugeot against which students were asked to work.
Selecting the shortlist      From hundreds of entries from dozens of design schools across the globe, the shortlist has been made up of all the designs which received at least one vote from one judge. The judges worked individually in the quiet of their own studios in their various locations in different parts of the world. The identity of the works they reviewed was hidden behind an ID number, so that images and, often crucially, the explanation, are all that could be assessed. The all-star judging panel then gathered in London to debate the winners through an intense round-table judging session. View this year's full results.
Down to sets of three    In each of the Awards categories, the three shortlisted entries with the most votes have become the finalists. Each of the finalists, and a friend, will be invited to attend the Awards Ceremony in Frankfurt on 14 September 2011. The Awards night will have the work of all the finalists on display, and will see the cream of the professional design community mix with the excitement of the students.
The winner is...    The winner in each category will be announced, and a trophy and cash prize awarded. And then, as the ultimate accolade, one of the winning designs will be revealed as the overall Interior Motives Student Design of the Year. View last year's winning designs
Prizes will be awarded in the following categories:
A successful start to a career  Many of the competition judges and the other senior designers who attend the Awards Ceremony make no secret of the fact that they are looking for new talent. They consider the Interior Motives Design Awards to be a significant opportunity to identify and make contact with potential employees.