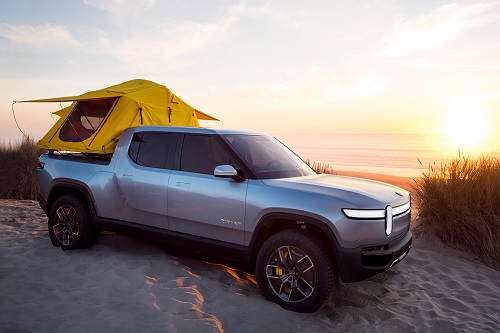 When Rivian’s R1T electric pickup truck was unveiled in November, it marked the fruition of a decade-long effort. Startup Rivian was founded in 2009 and initially aimed to build a cheap, fuel-efficient 2+2 sports car. But as early as 2011, founder and CEO RJ Scaringe switched focus to upmarket EVs.

Design development of the R1T (and its SUV sibling, the R1S) began relatively late in the day. Vice president of design Jeff Hammoud arrived at Rivian in May 2017, from FCA, to find an almost blank slate. “I had to hire a team – it was pretty much starting from scratch on the design side,” he recalls. “The engineering was much further along, which was good, but I still had time to influence proportions, wheelbase, occupant H-points – things like that.”

Seven months later, in January 2018, the company moved to its current base in Plymouth, Michigan. “That all happened rather quickly,” he says. “We’re a small team – only about 35 people on the entire design team – and we’re all in one open space. Engineering is on one side, designers are on the other, and it’s a nice big space. There’s a lot of collaboration.”

Design was frozen by the summer of 2018, giving the company time to build production-intent R1T and R1S prototypes for their debut at the LA show in November. 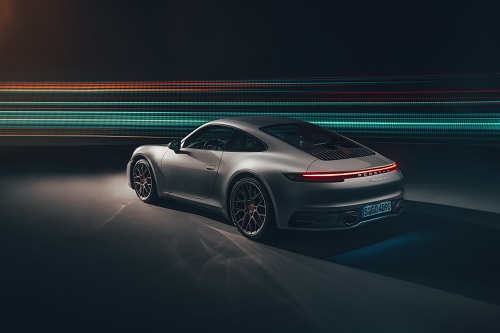 The Porsche 911 is the most iconic sports car of all. First launched in September 1963, it has been cautiously evolved over subsequent model generations, a trend that has continued through to today’s new eighth-generation model.

The most significant change was made in 1997, when the air-cooled 993 variant was replaced with the bigger, water-cooled 996 model. That revamp altered the proportions as well as the scale of the car, and also brought great changes to the design and layout of its interior.

After the 996 morphed into the 997 in 2004, 2011 saw the arrival of the thoroughly redesigned but similarly sized 991 model generation. And finally the new 992 variant, launched at the Los Angeles auto show in November 2018, represents the latest interpretation of the 911. Technologically, it remains relatively close to the 991 and indeed some versions of the older car will be sold in parallel to the 992 for some time to come.

Externally, the 992 differs noticeably from the 991 with its wider front and rear, and with its more upright headlights, recalling the classic 911 front end. It also has a wider, more pulled-down backlight. Porsche says the new car’s overall look has drawn on the classic 930 Turbo of 1974.

“The reduction to the essentials, the timelessly beautiful connection of form and function, will always be part of the 911,” says chief designer Michael Mauer. “A 911 will never look old,” he adds. “It represents the core of our brand.” 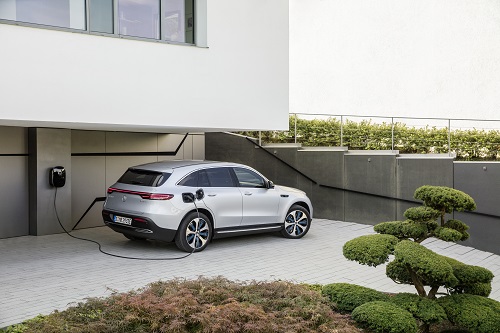 Mercedes-Benz jumped into the electric vehicle party in September, with the launch of EQC, the first fruit of its new battery electric vehicle (BEV) sub-brand. The company aims to have 10 new EQ-badged vehicles on sale by 2022.

EQC was launched in Stockholm, Sweden, at the Mercedes-sponsored ‘Me’ festival. Like its show-car preview – the Generation EQ Concept exhibited at the Paris show in 2016 – the production EQC is a mid-sized SUV, aimed at one of the fastest growing market segments on the planet.

Of course this is not Daimler’s first foray into electric vehicles. In 1972, Mercedes launched an electric light van called LE 306, propelled by a swappable lead-acid battery pack, while more recent efforts include a battery powered B-Class and electric Smart city cars. Daimler also held a financial stake in EV pioneer Tesla between 2009 and 2014. The launch of the EQ brand marks a fundamental shift in emphasis, however.

Daimler chairman Dieter Zetsche says EQ vehicles will account for between 15 and 20 per cent of his firm’s total output by 2025, a forecast that is “on the offensive side of predictions”, he says.

Gorden Wagener, Daimler chief design officer, says EQC introduces a “Progressive Luxury” design idiom that will extend across future EQ products. “This creates an experience and a preview of the ‘next big thing’ to come tomorrow,” he asserts. “With its seamless, clear design, the EQC is a pioneer for an avant-garde electric look.” 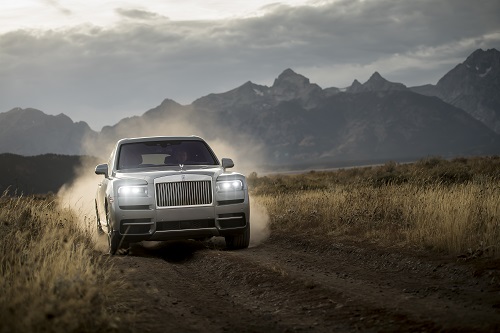 Rolls-Royce has long taken a conservative approach to in-house body shapes, leaving station wagons and shooting brakes to coachbuilders and converters. But the rise in demand for luxury SUVs has meant the company can no longer afford to ignore this burgeoning vehicle format. Hence the Rolls-Royce Cullinan, coyly referred to as a high-bodied car rather than a sports utility vehicle.

The Cullinan name is borrowed from the world’s largest raw diamond, found in South Africa over a century ago and now part of the UK’s Crown Jewels. Appropriately, the automotive Cullinan comes at a huge price – starting at £250,000 in its home market or $325,000 in the US. That is nearly double the cost of a Bentley Bentayga or Range Rover LWB Autobiography.

The project started in 2013 with a proposal to the BMW board to investigate a luxury high-bodied model using the new modular aluminium platform developed for all future Rolls-Royce models.

Dubbed the ‘Architecture of Luxury’, this same chassis frame can be trimmed to different widths, angles and dimensions according to model. Six key areas govern how models may vary — in dash-to-axle measurement, wheelbase, rear overhang, cowl position and height, seat height and ride height. Compared to the current standard-wheelbase Phantom VIII limousine, the Cullinan loses about 400mm in length but gains almost 200mm in height.

The Ford Ranger was first introduced to the North American market in 1983, a replacement for the Ford Courier, a small pickup that was actually a rebadged Mazda B1800. For 29 years the Ranger served as Ford’s staple in the compact pickup space. But in 2011, with the mid-size market slowing in North America, the Ranger was retired as Ford focused its efforts on the market for full-size trucks.

But elsewhere there was still enormous opportunity in the compact pickup space. In 2011, just as the Ranger bowed out of North America, other global markets received a new T6 generation vehicle, followed by a mid-cycle refresh in 2015. The T6 Ranger was designed and engineered in Australia.

Then in late 2018, a substantially revised Ranger was reintroduced to buyers in North America, revealed at the Detroit show in January and exhibited in final production form at the Los Angeles show in November. Again, it was Ford’s Melbourne studio that took charge of the update. 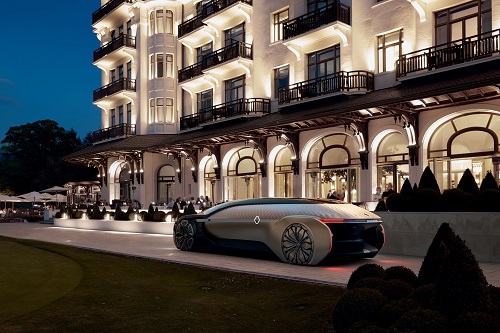 Renault’s EZ-Ultimo is the latest in a series of thought-provoking concept cars from the French manufacturer, each grappling with a different aspect of what vehicles might become in a future of shared, autonomous, electrically propelled mobility services.

It is perhaps surprising to learn that the long and low torpedo-shaped EZ-Ultimo shares the same skateboard chassis as its utilitarian predecessor, the EZ-GO autonomous people carrier (see IM Summer 2018). “It’s the same technology,” says Stéphane Janin, design director for concept cars at Renault. “They are on the same wheelbase, they have the same covered wheels.”

The earlier EZ-GO was intended to provide shared urban transport, with its large transparent windows maintaining the feeling of public space even inside the vehicle – a strategy intended to foster safety and respect among up to six ride-sharing strangers. EZ-Ultimo instead provides intimate, luxurious privacy for no more than three.

Much of the car’s champagne and green-black carapace is formed from 600 flat, diamond-shaped facets. They are opaque from the outside, and only subtly translucent from within. EZ-Ultimo’s passengers might share the vehicle for short periods, but they will likely know or trust each other before they climb into its opulent interior. 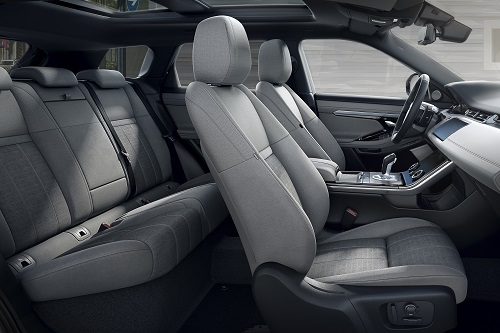 Unusual materials and novel technologies are breaking new ground in automotive seating, as manufacturers grapple with looming shifts in the role of the car. Comfort, sustainability, mass reduction and autonomy are just some of the factors influencing the car seats of the future, as Lem Bingley reports.