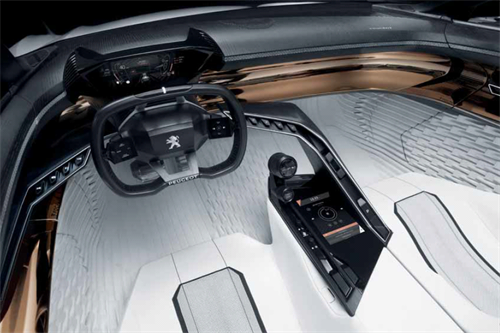 Form following function is a familiar concept – but aesthetics after acoustics takes this notion a stage further. “We wanted to really push sound design quite far, and we also wanted to work on an electric car to see how we can bring interesting sensations and experiences,” says Gilles Vidal, Peugeot design director. “By sound design, I mean everything, not just designing the sounds of the side indicator. A petrol engine hides the sounds from the frictions of mechanical elements, clicks and cracks, but in an electric car these show. And we wanted to use sound to amplify and enhance the ergonomics. So we said okay, let’s talk to a musician, a real sound designer.”

Electronic music composer, producer and sound designer Amon Tobin was contacted. Vidal says: “He is not only a musician, he designs all his shows as well – he thinks like a designer, his process is like a designer’s. So we understood each other very well instantly.” Tobin’s input from the early stages of the project informed the development, construction and even aesthetics of the Fractal, inside and out. 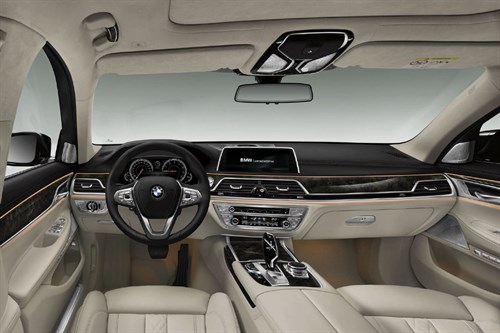 Now reaching its sixth generation, the BMW 7 Series has long been a dynamic benchmark for luxury cars, with its powerful engines, sports-oriented chassis, light weight and performance-focused technologies. With its lower profile and an exterior defined by precise, sculpted lines, this new model needed an interior to match - and close inspection reveals an entirely new approach. “This is the first car we’ve done where everything you see, feel or sense has the same design intent,” BMW Group head of design Adrian van Hooydonk told us. “In this car, everybody – including the user interface designers – was there from the beginning with the goal of modern luxury.”

The challenge was two-fold: to create a sporting luxury sedan yet upgrade the interior for even more comfort, says Hildegard Wortmann, responsible for product management at BMW. The focus was on the needs of the 7 Series’ largest markets, the US and Asia where many customers are chauffeured. Here, relaxing in the rear seats after work or on their way to an appointment is considered a luxury, she explains. Oliver Heilmer, head of interior design, describes the result as “a German product with international genes.” 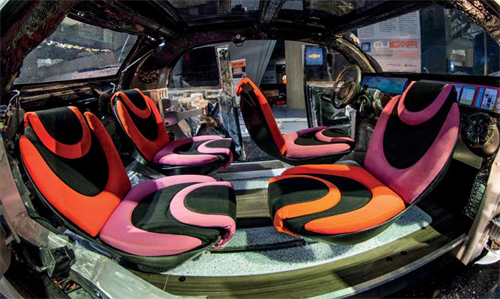 Earlier this year, a concept called Deep Orange 5 was unveiled at the GM Renaissance Center in Detroit. Engineered and built by students from Clemson University International Center for Automotive Research (CU-ICAR, South Carolina) and designed in collaboration with students from Art Center College of Design (Pasedena, California), this car was conceived as an affordable yet highly-connected vehicle for young drivers, the so-called Generations Y and Z, for 2020.

The Deep Orange programme was set up to immerse graduate automotive engineering students into the broader automotive world and involves working with designers, industry partners and OEMs. Students work on the project from their entry into the academic programme until their graduation, gaining hands-on experience in vehicle design, engineering, prototyping and production. A new prototype – to incorporate product innovations and new processes – is built each year. Deep Orange 5 began in January 2013, when 80 CU-ICAR engineering students started work in 10 competing teams, each with two designers from Art Center College of Design, in response to a challenge from sponsor General Motors. 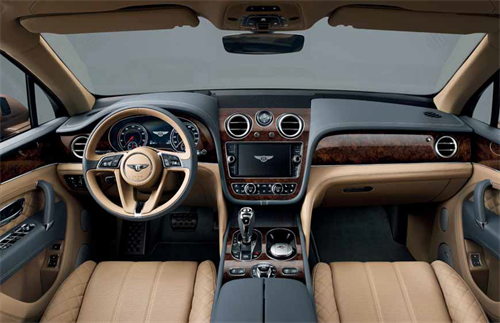 In 2012, Bentley’s EXP 9F concept car proved controversial, yet while many saw a brutal and unsophisticated SUV exterior, its luxurious interior was widely praised. Subsequently, and after a change of design director – Dirk van Braeckel replaced by fellow Belgian Luc Donckerwolke – a re-think was undertaken for what would become the 2015 production Bentayga. But what of that concept’s great interior?

Darren Day is well-placed to comment, having been the interior design project manager on the EXP 9F under then head of interior design Robin Page, and he continued work on the production vehicle. The process was overseen by Stefan Sielaff, at the time head of interiors across the VW Group. “We got all the feedback from the concept car, Luc Donckerwolke came in and there was a clean sheet of paper, exterior design-wise,” Day recalls. “To a degree, on the interior, the EXP 9F was one of the proposals. We did start there, but the looked at what other proposals we could do that would suit the [new] exterior direction, as you don’t want a car where the interior doesn’t really match.” 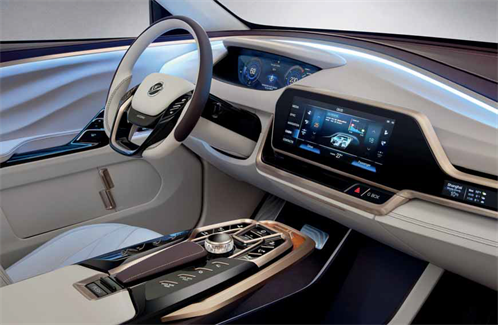 After the Detroit motor show in early 2013, the advanced product development and sales leadership team at Johnson Controls Inc. met to discuss comments and feedback from OEM customers. “One comment stood out,” says Richard Chung, the then JCI global vice president for industrial design. “‘You are the leading automotive interior supplier – what is your vision of future interior?’ So the project called IV25 began. This stands for Interior Vision 2025.”

IV25 called for the supplier’s innovation team and its three global design studios (Shanghai, Michigan and Neuss, near Dusseldorf) to identify the main issue which would have an impact on each region – China, North America and Europe - by the year 2025. Chung says that the three key regional topics identified were autonomous vehicles in North America, growth of the A and B segments in Europe, and growth in the luxury sector in China, predicted to become the world’s number one luxury-segment market by 2020. This informed the brief for the project which became the ID15 concept and, in turn, the ID16 seen at the Frankfurt motor show this year. This was presented under the new Yanfeng Automotive Interiors (YFAI) brand-name, following the establishment of a joint venture between JCI and China’s Yanfeng Automotive Trim Systems Co. Ltd., a wholly-owned subsidiary of HASCO, SAIC Motor’s component group. 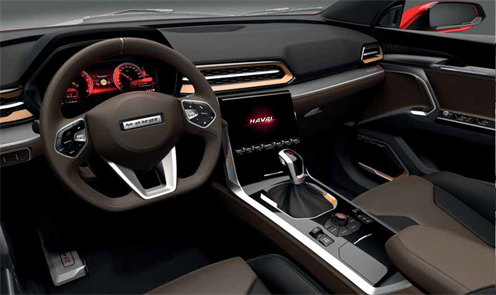 At the Shanghai auto show earlier this year Great Wall Motors caused quite a stir with its two Haval concepts, which were displayed on an impressive three-tier stand. The steel-blue Concept B (opposite page) is a B-segment compact SUV, conceived as an entry-level model for younger buyers living in urban areas, while the larger red Concept R (below) is a more upmarket crossover proposition. The pair roughly equate to the Nissan Juke and Kia Sportage respectively in terms of dimensions.

“With Haval, we want to show our dedication to the world of SUVs,” explains Pierre Leclercq, Great Wall Motors vice president, head of design. “By doing SUVs of different sizes and different characters, we can showcase our DNA.” B stands for Haval Blue, R for Haval Red, sub-brands and model-lines to be distinctly differentiated and positioned. “The goal, of course, is to reach more customers with a clever use of platforms,” explains Leclercq. “As with any company, the brief came from our marketing department, and the idea of Blue and Red is a plan we’ve had for a while. Shanghai was its introduction to the public.”