November 25, 2002 - Graduating MA students from Britain's Coventry University School of Art and Design have shown their work in the annual MA Design Degree Show held in September. Dubbed “Autumn Collection”, the show was held in the new clay studios of the School of Art and Design which provided a fresh setting for the work of the 24 graduating students. Displays included work from students’ own major design projects as well as sponsored projects done in conjunction with Ford and PSA.

Adam Fairless showed a concept entitled ‘Thrill Seeker’s Paradise’, which recreates the emotional and psychological aspect of being driven at the edge of a vehicle’s limit. It translates the thrill seeking experience of roller coasters and arcade games into a track day sportscar, which provides an agonising yet safe ride for fee-paying passengers. Fear-inducing features include cut-away bodywork, a transparent floor, deliberately claustrophobic cockpit layout and mysterious footwell lighting.

Ning Huang’s second place concept was for a ‘Wave Runner on Land’. Based on leisure and sport boat design, the high quality tandem two-seater concept was commended by the judging panel for its perfect extrapolation of Yamaha’s brand and product philosophy, one of Ning’s main influences.

Andy Entwhistle’s design was for a 2+2 Lotus, which could be used by former Elise owners once they start a family. The styling showed influences from other transport areas such as aircraft and motorcycles and aimed to balance the fundamental Lotus lightweight and athletic values with increased functionality. Transparent panels running down through the bodysides to the front wheelarch allow younger passengers a good view out.

Igor Lobanov from Russia showed a striking biomechanical form whose structure was influenced by insects, spiders and crustaceans. As well as the shell-like form and exposed wheels, the design shows a new use of mechanical details as graphic elements, such as the rear suspension arms using coloured gel-encased springs to mimic the articulated sections in skeletons.

A “Solaraycer” was the work of Adam Hopwood. This hybrid solar + fuel cell three-seater aims to overcome the “dull and unsporty” nature of current solar cars. Taking inspiration from South American culture and the sun, the concept made use of many Inca and Mayan motifs in the graphics of the body.

Also taking a sun theme as an influence, Thatchpol Julniti from Thailand focussed on beach culture for his design. The crisp geometrical form features deeply tinted orange glass as a key graphic element in the design.

German student Thomas Hasenauer showed a 40% scale interior model for his final project. The design concentrated on how materials, colours and shapes could express emotion and his sketches explored themes from such varied sources as big cats, helicopters and architecture.

A Jaguar 2+2 sportscar for the X-generation was shown by Simon Bishop. Based on the platform of the current X-Type, the concept mixes strong muscular surfaces with many Jaguar design cues, particularly from the E-Type. The model demonstrated how the roof could slide back under the rear glass to transform into a 4-seat Targa, while the pillarless layout with rear ‘half-doors’ allows improved access to the rear seats.

Joey Lam chose to study how motorcycle design and architecture might influence a new sportscar. The open-sided model included neat details such as a new type of modular tyre made up of segments and floating polycarbonate body shield panels using aluminium fixings.

Other projects included:
- A socially responsible steam-powered muscle car for America by Sam Bryer
- A sportscar echoing a woman’s natural curvature, to be alluring to both sexes by Leanne Watkins
- A next-generation SUV by Hyundai-sponsored Byung-Sol Lee
- A new Alfa Romeo flagship by Aysar Ghassan

"I was particularly pleased to see the influence of the many different nationalities and cultural backgrounds of the students reflected in the design concepts on show” said Peter Horbury. “Strong national identity in automotive vehicle design is to be encouraged and, I believe, can go a long way to help sell a product."

The Coventry Masters programme, now in its tenth year, offers its students two routes to graduation. The MA Automotive Design focuses chiefly on ‘Surface Exploration’ and practical 2D and 3D skills for employment as a studio designer whereas the MA Automotive Design Research path sets more of a ‘Research Exploration’ task leading to careers in design strategy or brand management.

Both routes in the 50 week, 3 semester, course are designed to appeal to former BA Design graduates who would like to spend a year honing their skills or acquiring new ones, especially in the use of Alias software and clay modelling skills. The first two semesters each have a sponsoring manufacturer, setting a specific brief and acting as ‘client’ for the students. More freedom, however, is given to the students’ final project, which lasts 30 weeks. Definitive guidelines are set and a research report has to be submitted, explaining the intent for creating such an idea. The course has a strong international presence, with students from China, Korea, Germany, Russia and Malaysia among this year’s graduates.

Corus Automotive is a major European producer of steel and aluminium for the motor industry and has acted as Degree Show host for the past four years. 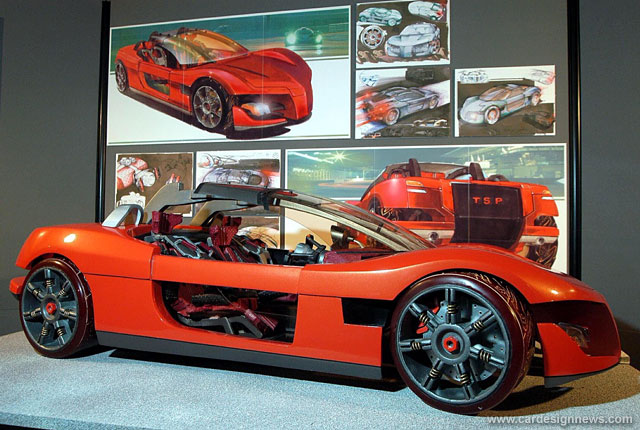 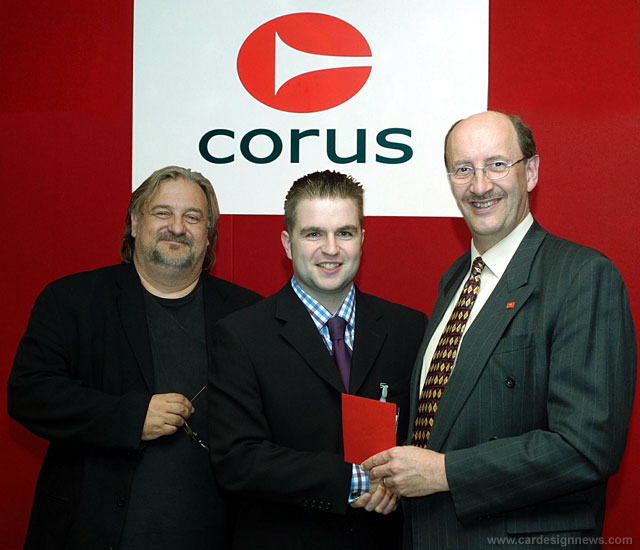 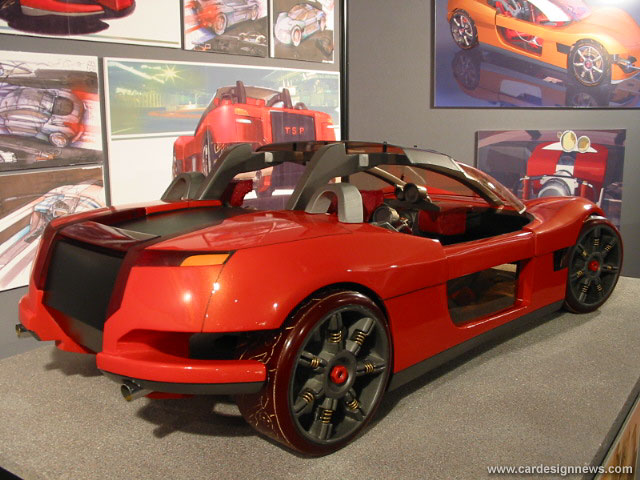 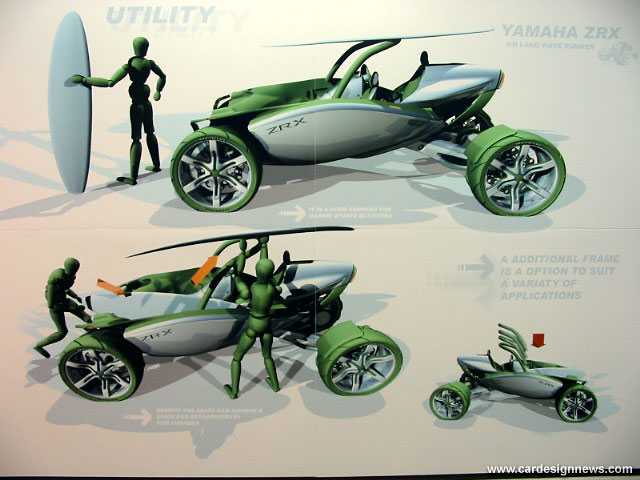 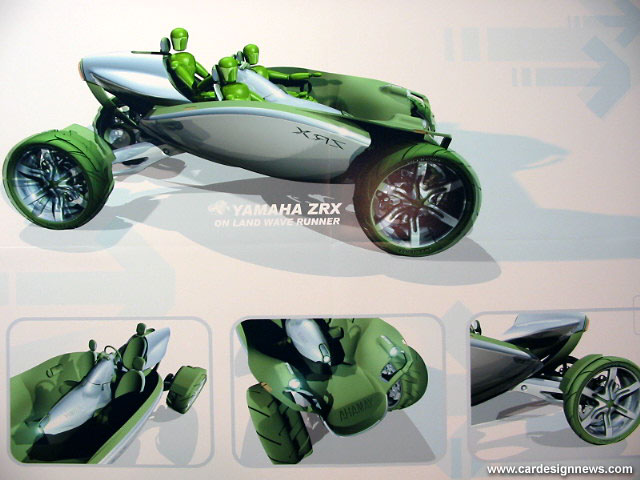 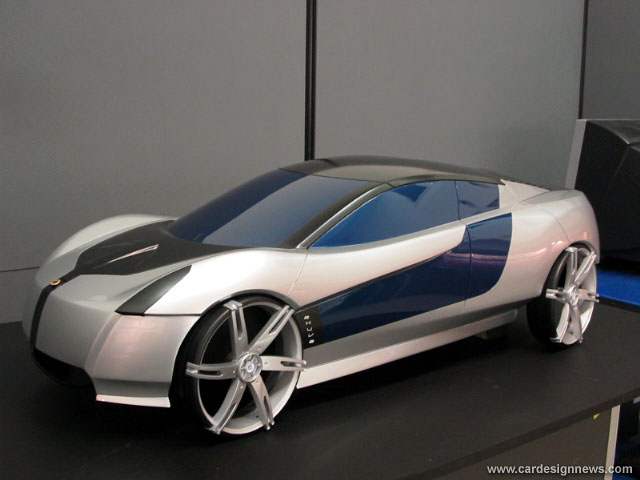 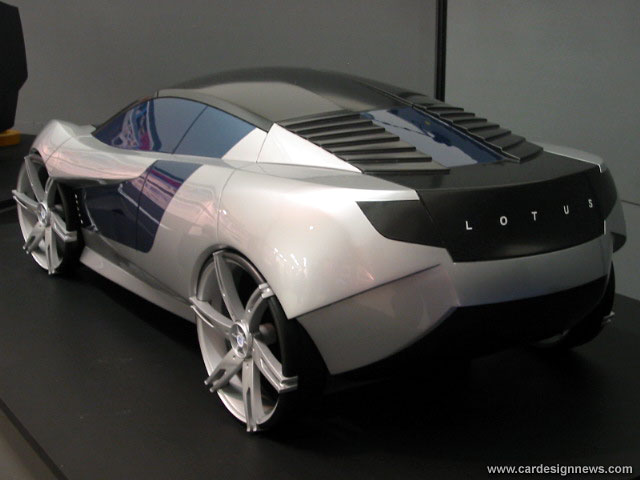 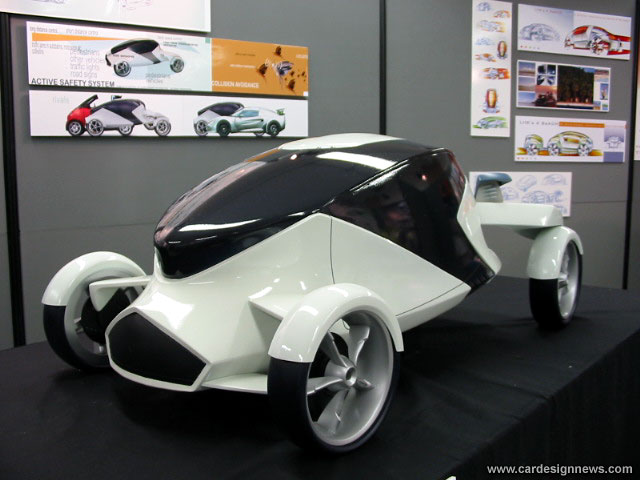 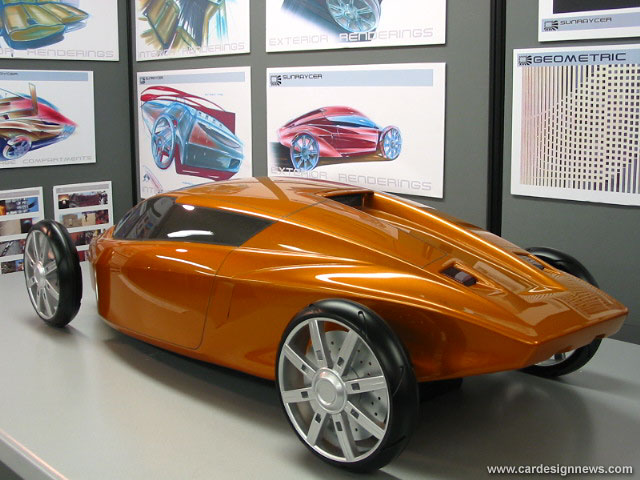 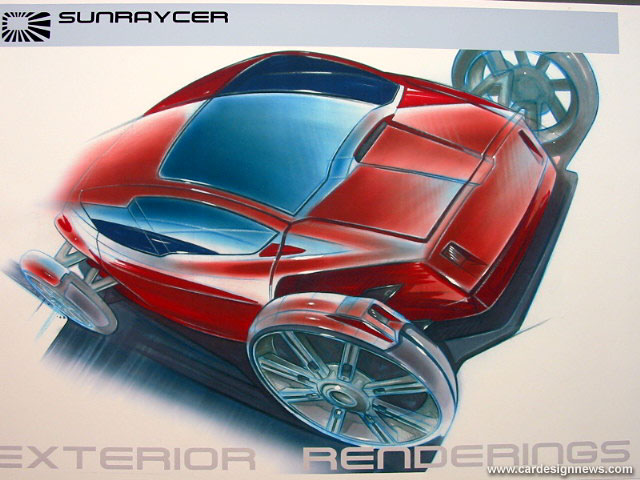 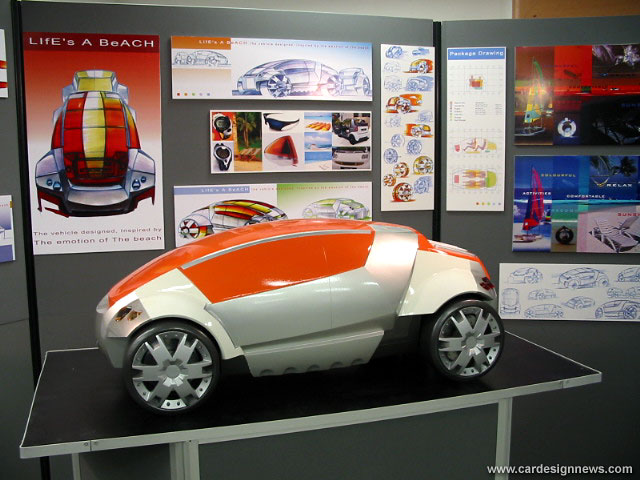 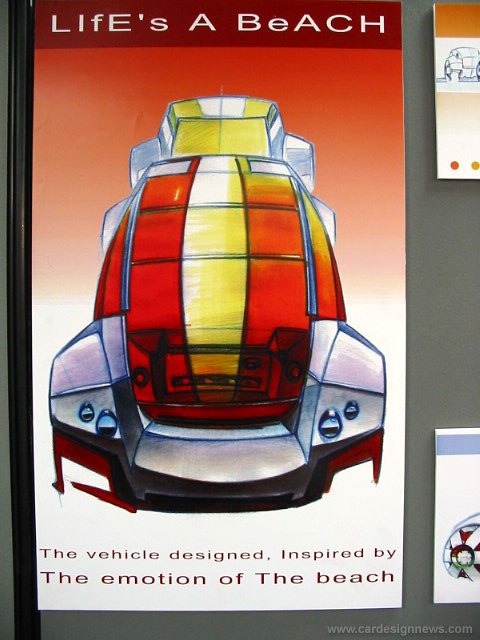 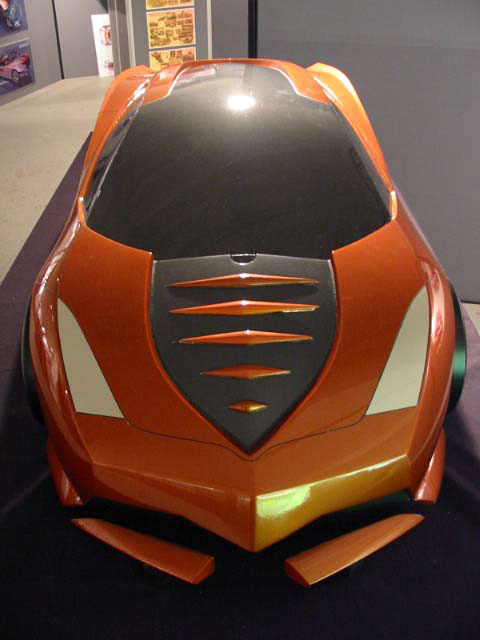 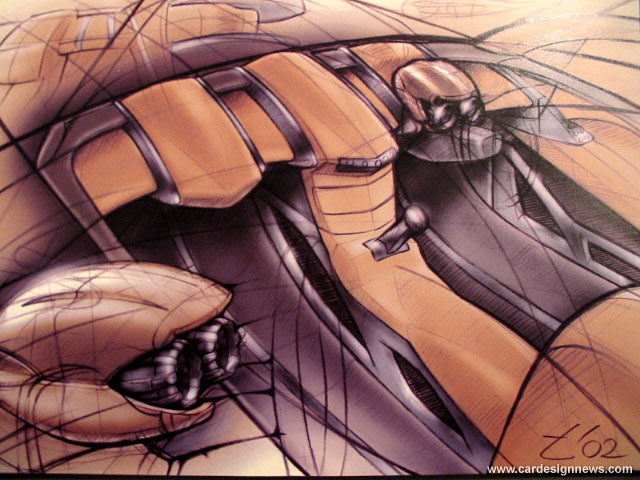 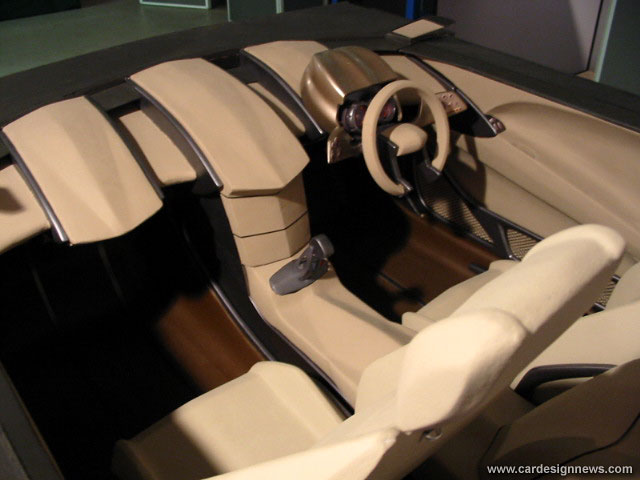 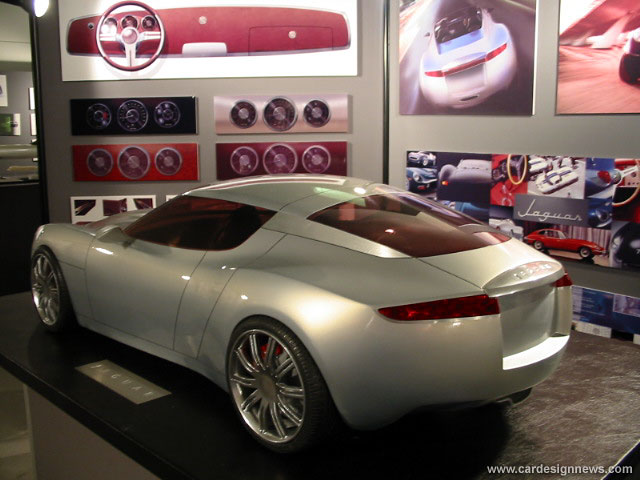 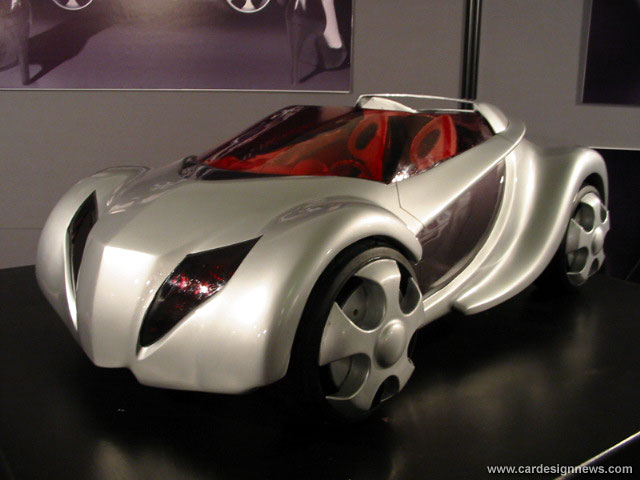 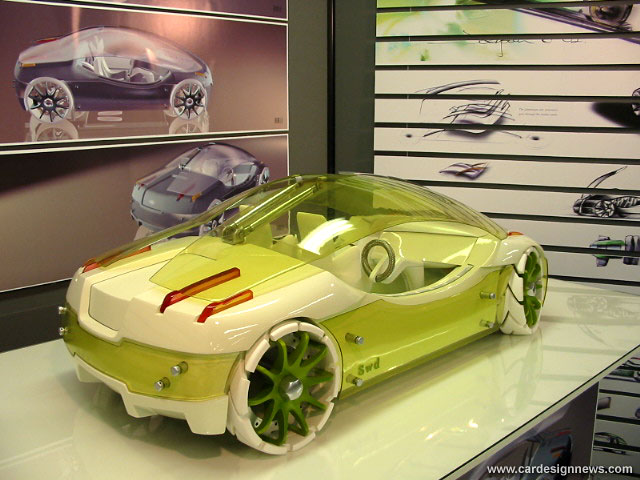