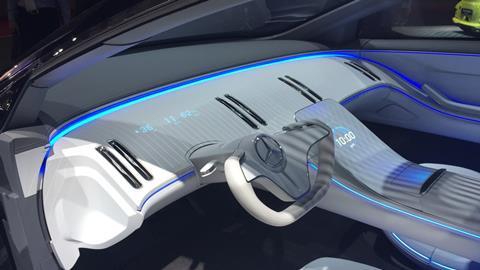 At the Frankfurt Motor Show, the Mercedes Vision EQS was undoubtedly one of the stars, but the doors to its completed interior remained firmly locked. At the Tokyo Motor Show those doors finally opened to the public and the amiable Holger Hutzenlaub, head of interior projects, was on hand to point out some of its key features to Car Design News. 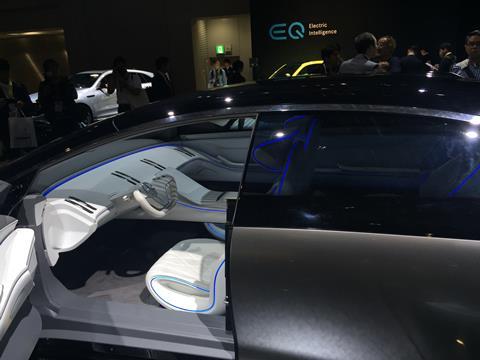 Finally, a peek inside the Mercedes Vision EQS concept

One of the key differences in the EQS’ bright white cabin layout compared to current production Mercedes interiors is the angle and positioning of the dashboard, which slopes forward and slightly away from the driver rather than acting as an intimidating and solid-feeling wall. Accented by longitudinally-arranged metal pinstripes and four sets of slim twin air vents, the driver information is projected on to the clean space where a conventional IP arrangement would normally be situated.

Infotainment screens elsewhere, like on the up-sloping centre console, only reveal themselves ‘on demand’ by proximity sensors knowing when your hand is near. Lighting that highlights the basic outlines of the seats and IP would appear to be only ambient, but they also turn out to have a good function too. Hutzenlaub says the EQS is a Level 3 autonomous vehicle with exterior sensors that can detect cyclists and pedestrians nearby, and then trigger the interior lights closest to them to turn them red, alerting the driver to their proximity and specific location (see photo). When all is clear, it reverts back to blue. 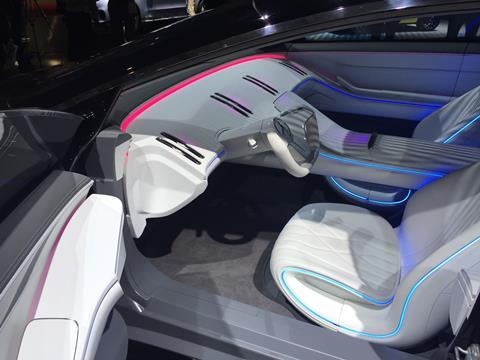 The elegant four-seat layout is luxurious but far from glitzy, and this ‘paring back’ of information until required is all part of the plan: “We wanted more space and less distraction,” explains Hutzenlaub, “and for everything in the car to support the occupants’ experience.” It’s one of the aspects that was key to the Mercedes design team’s desire to create a calm space that is easy to use.

He also said that the interior team had to work hard on the angle of the dashboard in relation to the windscreen to avoid reflections and maximise the readability of the projected information – and conceded that further work might be required to make sure the production version is functionally robust in this regard. That suggests some of the tech within this Vision concept might not make the first EQS production model that’s due in 2022. Hutzenlaub did say the basic interior architecture and the overall floating and light-filled theme would remain though. His interior boss Hartmut Sinkwitz has already confirmed that the longitudinal, slim and twin-vent design will also make production soon adding, “we won’t have chrome rings around everything anymore.” 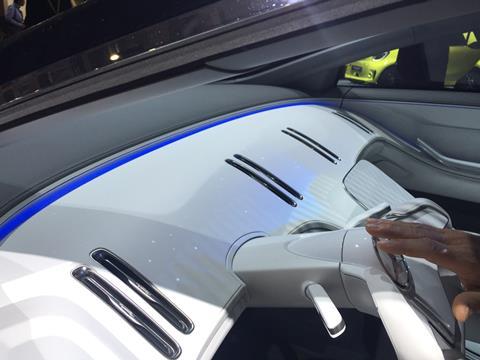 Responsible materials and smart surfaces abound in the Vision EQS

“What we’re working on in the next few years is the transformation of luxury to be more sustainable,” adds Hutzenlaub. Accordingly the EQS showcases a knitted textile headliner partially made from recycled materials and artificial leather by supplier Dinamica. In conclusion, Mercedes was far from the headline act in Tokyo but its presence with such a strong concept and with a new element to show in its interior – when all other significant European makers stayed away – was respectable and laudable.