There is an old adage in business circles: Dress for the job you want, not the job you have.

If you want to be the bank manager, dress like one. Want to be head of the department someday? Dress like the boss, not the intern. In these days of more casual dress, this advice might not have the importance it once had, but Toyota has, nevertheless, taken it to heart in the design of the Mirai Concept, revealed today in Tokyo.

Dressed for Success: The Mirai pivots to a more mainstream sedan format

The new Mirai, set to debut as 2021 model, looks production ready in its new sedan-like form.

With a long-ish hood and coupé-like profile, set on 20-inch wheels, the new Mirai has more than a hint of Lexus LS and Toyota Camry in its design.

Unlike the quirky, vaguely Prius-like form of the current Mirai, the new generation adopts a more sports sedan-like aspect and form. If the old Mirai was an alt.Prius, then the forthcoming generation is an alt.Camry, more mainstream in form and in market positioning. 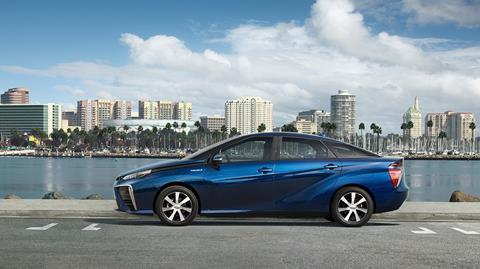 The 2015-19 Toyota Mirai – a polarising design, but a bold venture into hydrogen fuel

The new Mirai will be based on Toyota’s TGNA platform, the one currently used by the Camry and LS, although the Mirai may get its own variant – Toyota was mum about the specifics.

The car will be lower, longer, and wider than the current version, and will be rear-wheel-drive, as opposed to the front-wheel-drive version currently on the roads. 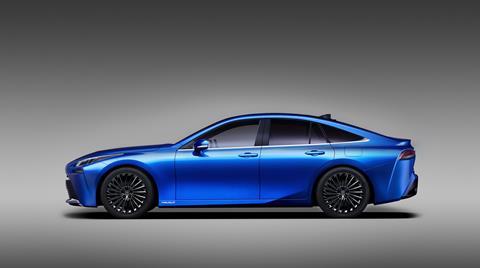 The new Mirai will seat five people, up from four in the current model. Interior appointments are typical of what you would expect in a similar ICE-powered sedan. The clean lines and forms of the dash accentuate the new, but not overly futuristic, tech inside the new Mirai, which includes a standard eight-inch digital combination meter and available digital rearview mirror that displays images from a rear camera.

Also shown in the Concept is the Toyota Premium Multimedia system, which uses a 12.3-inch high-resolution TFT touchscreen, includes navigation and a 14-speaker JBL sound system. All advanced, but not the stuff of science fiction. Indeed, the Toyota press release describes the design of the interior as a “modern layout infused with a hint of futurism without appearing off-putting.” A sly reference to the previous generation’s awkward design? You decide. 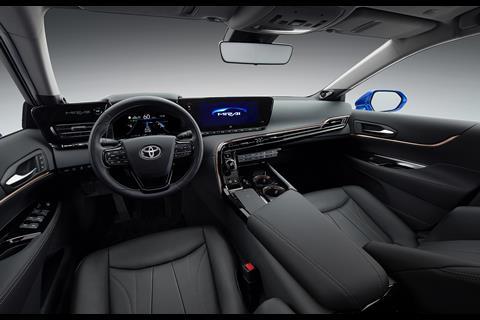 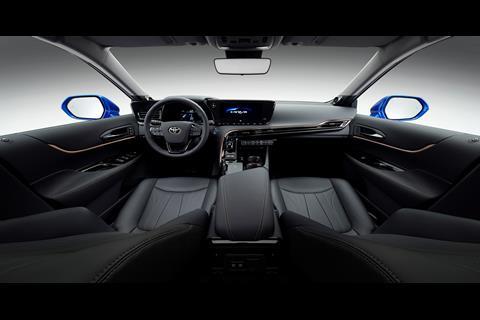 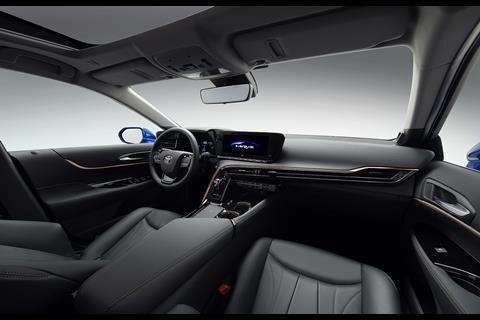 The Mirai features lots of goodies in a (mostly) conventional interior

Toyota claims that improvements in fuel-cell and battery technology will allow the new Mirai to achieve a 30 percent improvement in range, up from the 312 miles in the current model to around 400 miles in the new generation. That will get you from Los Angeles to San Francisco, the gold standard for range in California, the Mirai’s most important overseas market.

The radical change in design direction for the Mirai underscores a design dilemma that has been quietly talked about in design circles for twenty years now. Basically, it’s this: If you develop an innovative new powertrain, do you package it in a futuristic, potentially polarizing design package, or do you place it in a familiar, accepted format like a sedan or SUV? One design says, “Here’s the future- maybe a bit weird, but a lot of wonderful too.” The other says, “Business as usual here, enjoy the car you are familiar with, just adding a new powertrain under the bonnet.” 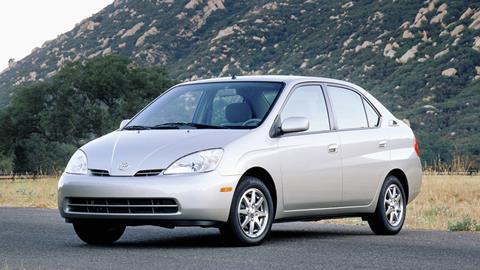 Toyota first encountered this dilemma with the Prius. The first generation was a frumpy econobox design with zero sex appeal and no expression of its futuristic hybrid drivetrain. Toyota then pivoted to a more futuristic, aerodynamic, pod design that was distinctive from other offerings on the market (and, incidentally, was a rolling testimony to the considerable research in aerodynamics that is an underrated feature of the Prius). 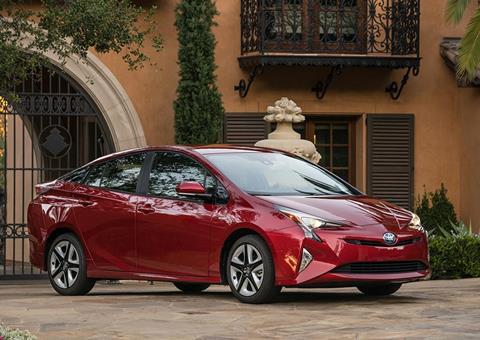 The current Prius – polarising, but distinctive and futuristic. Shown here in a traditional setting

Tesla also grappled with this dilemma in the design of the Model S. Franz von Holzhausen has spoken a number of times about this, and about the decision to employ a traditional, if very sporty, sedan design. It was thought that the electric powertrain was a radical enough departure from the traditional car. Divisive packaging or styling, it was thought, would probably hurt the adoption of the Tesla. 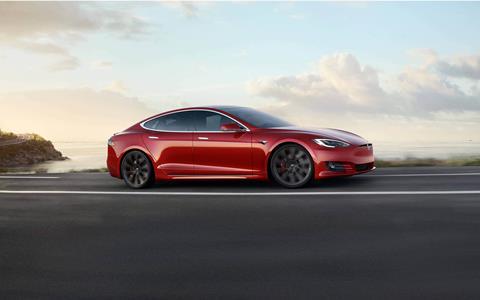 BMW went all-in on the future for its BMWi brand, with the i8 sports car, and i3 Megacity car. Both spoke of the future, and though one might argue with the BMW approach, it was a bold stroke that, sadly, BMW now seems to be backing away from. 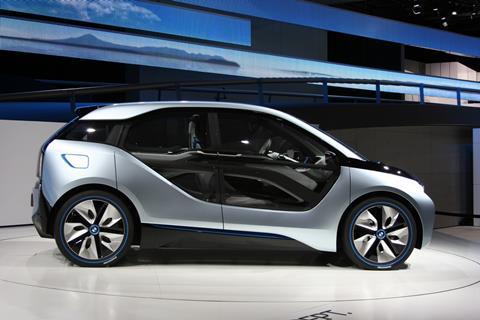 The MMW i3 Concept, shown here at the IAA in Frankfurt. All-in on the future

Now Toyota is making a design and positioning move with the new Mirai. By adopting traditional sports sedan format and design cues from other Toyota/Lexus products, Toyota is saying in effect, the Mirai is ready for the mainstream, not just the quirky outlier market of eco-pods. U.S. engineers and marketers, naturally, lobbied for an SUV format, but Toyota is aiming for customers in the premium sports sedan markets at home and abroad.

It is not often you can say that a company is making a bold statement by going more conservative in design, but it is certainly the case here.

Hydrogen may be the most abundant element in the universe, but harnessing it to be a fuel that can safely transport people in busses or cars is quite the challenge. There is plenty around- the U.S. alone produces some 10 million pounds of the gas a year. But often hydrogen is produced from natural gas, which means you are burning a fossil fuel to make a clean fuel. Cleaner sources include hydroelectric power and solar and wind. Once the hydrogen is made however, there is no mass distribution in place to get it to the individual fueling station. 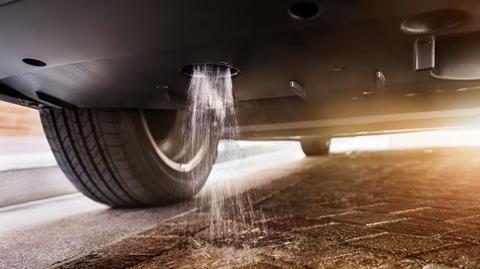 The Mirai’s exhaust emits only water

Additionally, the lack of fueling infrastructure hamstrings the market considerably. In the US there are 39 hydrogen filling stations in California and one in Hawai’i. Japan has 100 stations, Germany around 70, Norway has 30, the UK about a dozen, and Iceland has three (and seventeen hydrogen-fueled cars, including a few Mirais). Overall, there are around than 300 hydrogen filling stations in the world, and Japan has a third of those, suggesting the new design is focused on the home market. 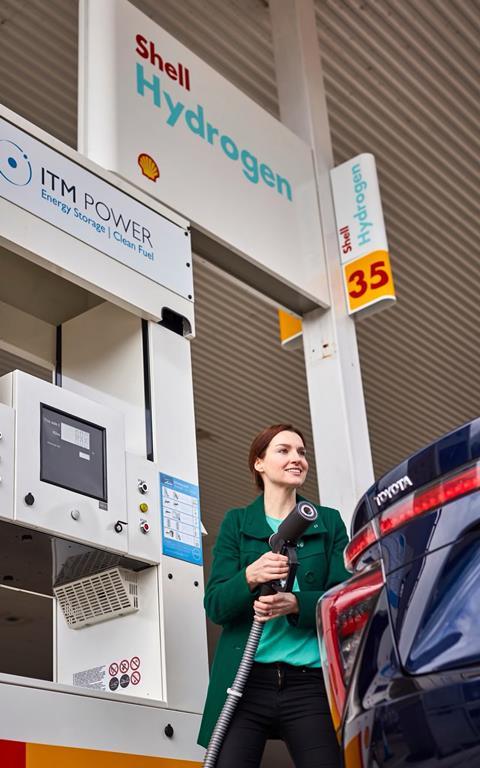 A new hydrogen pump at a petrol station on the M40. Mirai peeking into the picture frame at right

Antiquated laws, like those in some New England states, forbid the transport of hydrogen in some situations, meaning the Mirai is forbidden to cross many bridges and tunnels. Once these laws are eliminated or tweaked to exempt hydrogen-fuelled cars, there are stations ready to go online. 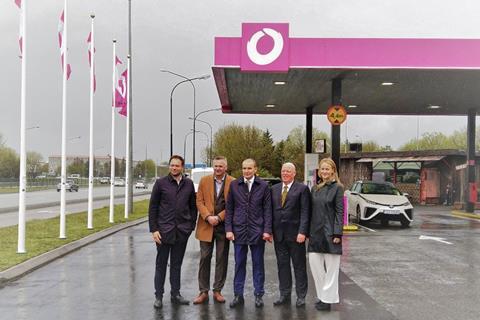 Opening the third New Hydrogen station in Reykjavik, Iceland. Note, again, the Mirai showed up for the festivities

Finally, there is the image of Hydrogen. Two words: The Hindenburg.

That ill-fated hydrogen-filled dirigible left an indelible impression on Americans’ minds (and many others) with its mysterious and spectacular explosion in 1937. Although the Hindenburg disaster is fading into history, and the safety of FCVs hasn’t been a problem, the memory of the incident is enough to scare some people away from hydrogen as a source of fuel.

So it is a bold move by Toyota to renew the Mirai, give it a fresh new design, and even plan to increase its production- by tenfold according to some reports. This for a car that Toyota loses money on even at a sticker price of nearly $60,000 (£49,000). But Toyota believes the time is right for the Mirai to position itself as a near-luxury sedan, the kind of car you could drive to dinner with friends and have the valet park it in a prominent place next to BMW, Mercedes or Lexus products. 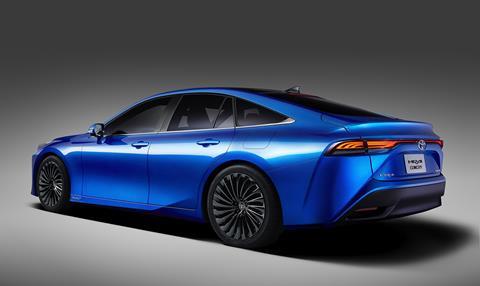 The awkward years of Mirai’s first generation are soon behind it. It is time for Mirai to ‘dress for success’ for a new decade, and take its place as a new player in the premium market.

Just keep a map of those H2 filling stations in the glovebox.