Kentia Hall – dubbed The Garage this year – at the Los Angeles Convention Center is literally the basement of the complex, and for years has been a sort of ‘Penalty Box’, a place where the delinquent children of the automotive world are sequestered, lest their ingenuity, garish colors, oversized wheels, and general badass-ery infect the more staid corporate offerings upstairs.

Here you can find every custom and modified vehicle under the sun – lowriders, hopped-up Smart cars, Italian supercars that have abandoned the autostrada for Fast & Furious LA, and, of course, dreadnaught-sized pickup trucks mounted on chassis so high you could camp out underneath them.

There are also the usual collectible dealers and automotive accessories booths, as well as eager fresh-faced product evangelists ready to convert you to the righteous path of appropriate chrome polish and antifreeze.

A walk through this weird and wonderful world is refreshing after the slick corporate presentations by the suits upstairs. It makes you believe in automotive culture, and reminds you that the car is a very personal, artistic thing. It’s impossible to document everything in “The Garage”, but here are a few highlights: 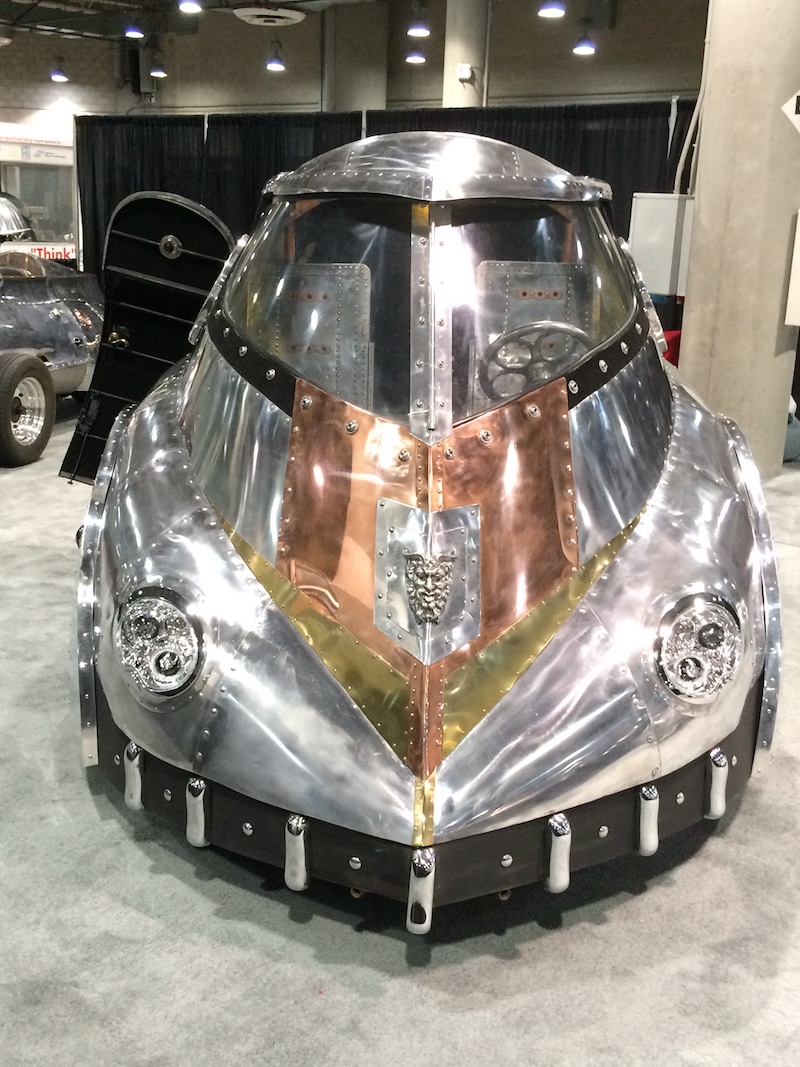 The Baron once again descends from his Silver Lake redoubt to bless his subjects with his usual collection of handcrafted vehicle sculptures, some of which are actually drivable. The Baron’s stand reeks of petrol and silver polish, but the collection of dieselpunk vehicles does not disappoint.

His latest is called Metamorphosis, which the Baron characterizes as “a cross between an airplane and a boat”. We were thinking it looks more like the product of a torrid love affair between a Zeppelin and a Tatra T77, but whatever.Powered by a traditional car engine, the Metamorphosis contains a bed and a sink with water pumped in from a tiny cistern. The porthole windows are operational, to catch the sea or mountain breezes.

The Baron’s vehicles are wonderful assemblages of copper, aluminum and repurposed machine parts. The hand beating and riveting show on each vehicle and the whimsical, Jules Verne styling make one smile and wish for a more sculptural and handcrafted automotive world. Perhaps the 3D printer can help bring that world to fruition. In the meantime we have the Baron and his wonderful creations. 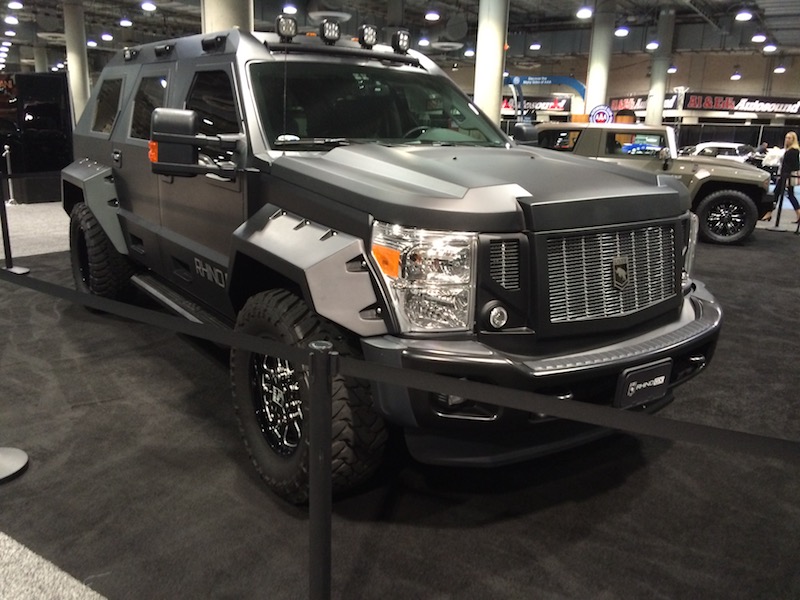 If you just have to be the baddest badass in town, Rhino is your brand. Created by US Specialty Vehicles based in Rancho Cucamonga, east of Los Angles, the Rhino GX and the smaller Rhino XT were created for the Chinese market, but have been sold to a few road warriors in the United States as well. Rhino came to the LA show to increase its visibility in the market.

Of course, in the day-glo wilds of The Garage, the Rhinos actually look rather subtle, even though their design language is clearly post-apocalyptic. The Rhino vehicles are armor plated, though not bulletproof. The wheels fairings are fibreglass, but everywhere else is real 20 gauge (!) steel.

The interesting hexagonal DLO treatment on the sides of the GX reminded us of a battle-hardened version of the Ford Airstream we profiled here at CDN a few weeks back.

The GX is based on a Ford 250 super duty and is actually wider than a limousine with a more luxurious interior- a contrast to the tough guy exterior. The smaller Jeep Wrangler Unlimited-based XT is similarly plush. Mad Max, eat your heart out. 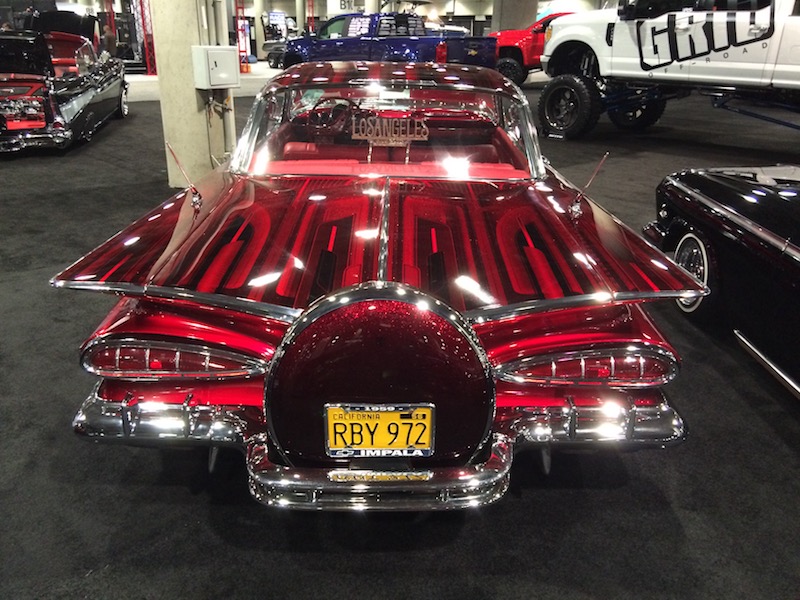 The famous custom wheel manufacturer had a large stand filled with wild customs sporting its bespoke collection of oversized wheels. DUB vehicles are never understated and the wild modifications and outrageous colors speak loudly of the vibrant car scene of Los Angeles.

Predictions of a future filled with anonymous transportation appliances have not reached the folks at DUB, who still see the car at a rolling canvas for personal expression. 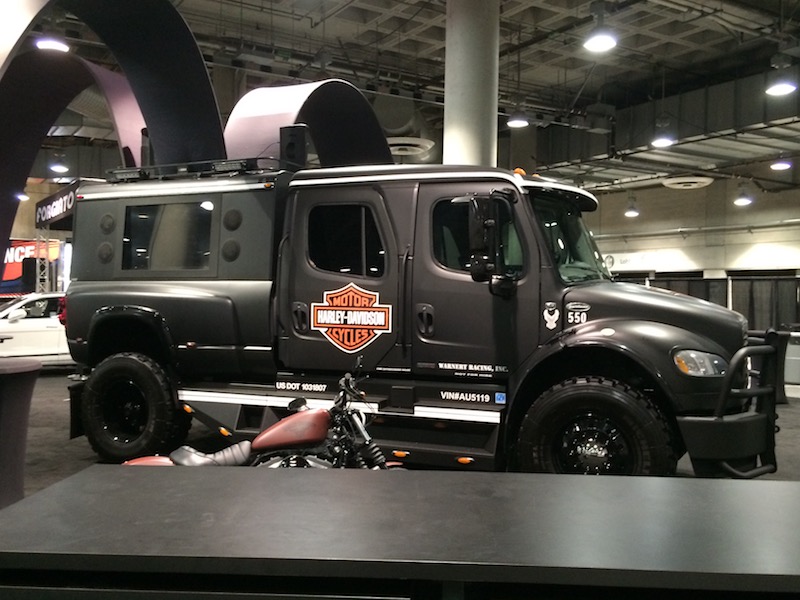 The Hogs were still being driven in when we stopped by the Harley stand, but as always, classic American two-wheeled sculptures and massive trucks were on display. Yamaha and other motorcycle manufacturers were also present at The Garage, showing both two- and four-wheeled products. 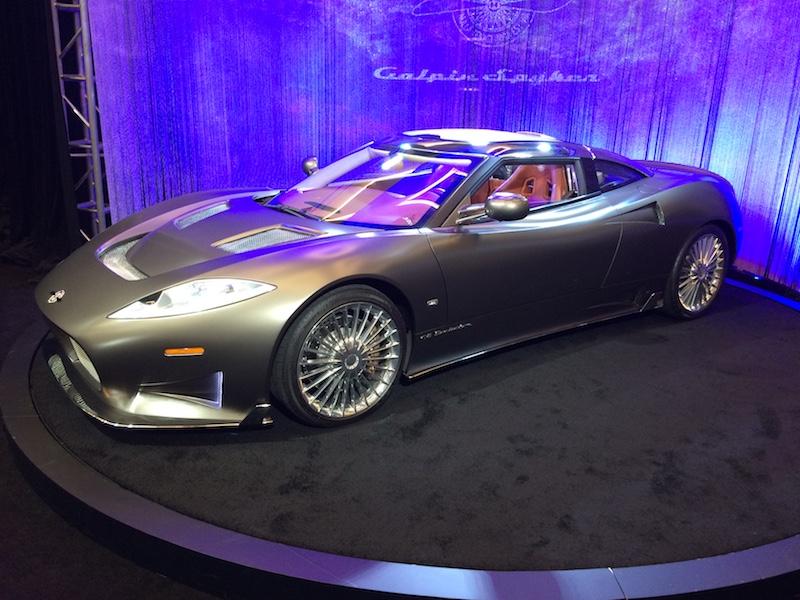 Galpin has been a fixture in automotive sales for decades in Los Angeles. And along the way the dealer has sponsored racers, built custom cars, and even created concept cars with Henrik Fisker. Galpin now has its own hall at the show, with the usual portfolio of classics along with some newly finished projects. The Pink Panther movie car was shown this year, complete after a five year restoration project. The Galpin Spyker was also present, as well as Mustangs from Amazon’s new show ‘The Grand Tour’.